Food service workers, who said they had negotiated coronavirus pandemic relief from Johns Hopkins University, picketed outside of the Homewood campus today, charging that Hopkins has reneged on the deal.

With nearly all of the 200 employees who staff kitchens and dining halls laid off after students were sent home in March, Hopkins had agreed to pay a stipend amounting to four weeks of pay.

Now, according to the workers, management is backing out of the deal.

“I rep Johns Hopkins, I’m proud to be part of the Johns Hopkins family,” Latifah Pearson said, pointing out that she was using a scarf with the school’s bluejay mascot as her protective mask.

“But it just hurts, you know what I mean, that they don’t really care as much,” said Pearson, one of about a dozen people still staffing food service for the smattering of people remaining on campus.

She and the others will be losing their jobs in a few weeks, a grim prospect for Pearson, 30, who has worked for Hopkins for 10 years and lost her second job, at a Randallstown restaurant, when that establishment shut down because of Covid-19.

Pearson stood with 17 others, most of them wearing their black food service uniforms and many holding signs that said “We Are Essential.”

“Our savings are depleted,” said Janica Hudson, who has worked in Hopkins food service for nearly six years and was laid off in March. “We have rent, food bills, electric bills, car insurance, car payments. How are we going to pay them?” 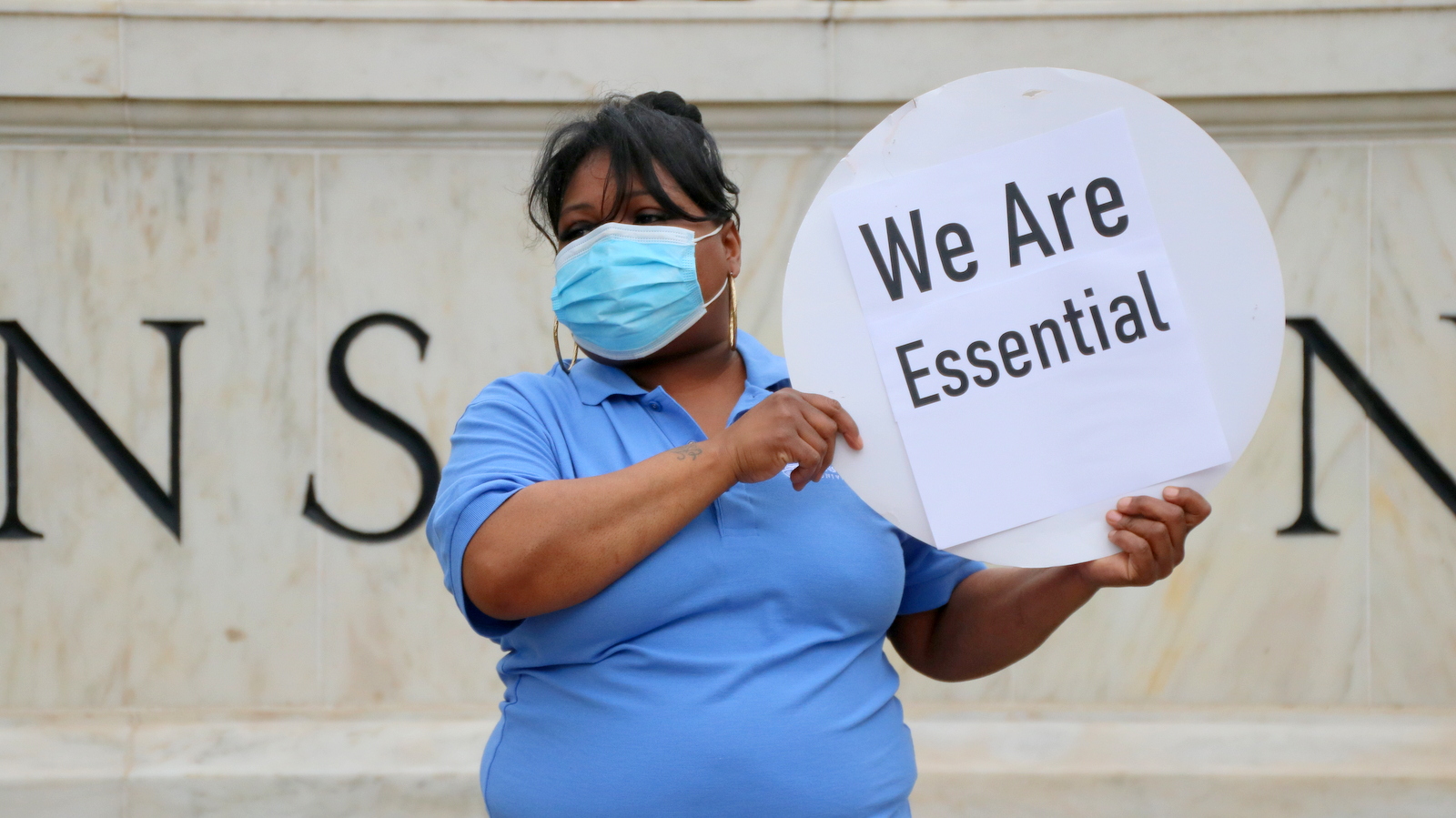 “That’s change in a bucket, to give people four weeks” of pay, Palmer said, addressing about a dozen supporters in the Charles Street median about 20 feet away.

She said most of the employees are not receiving unemployment payments because they did not work long enough to qualify or because the payments simply have not come yet. 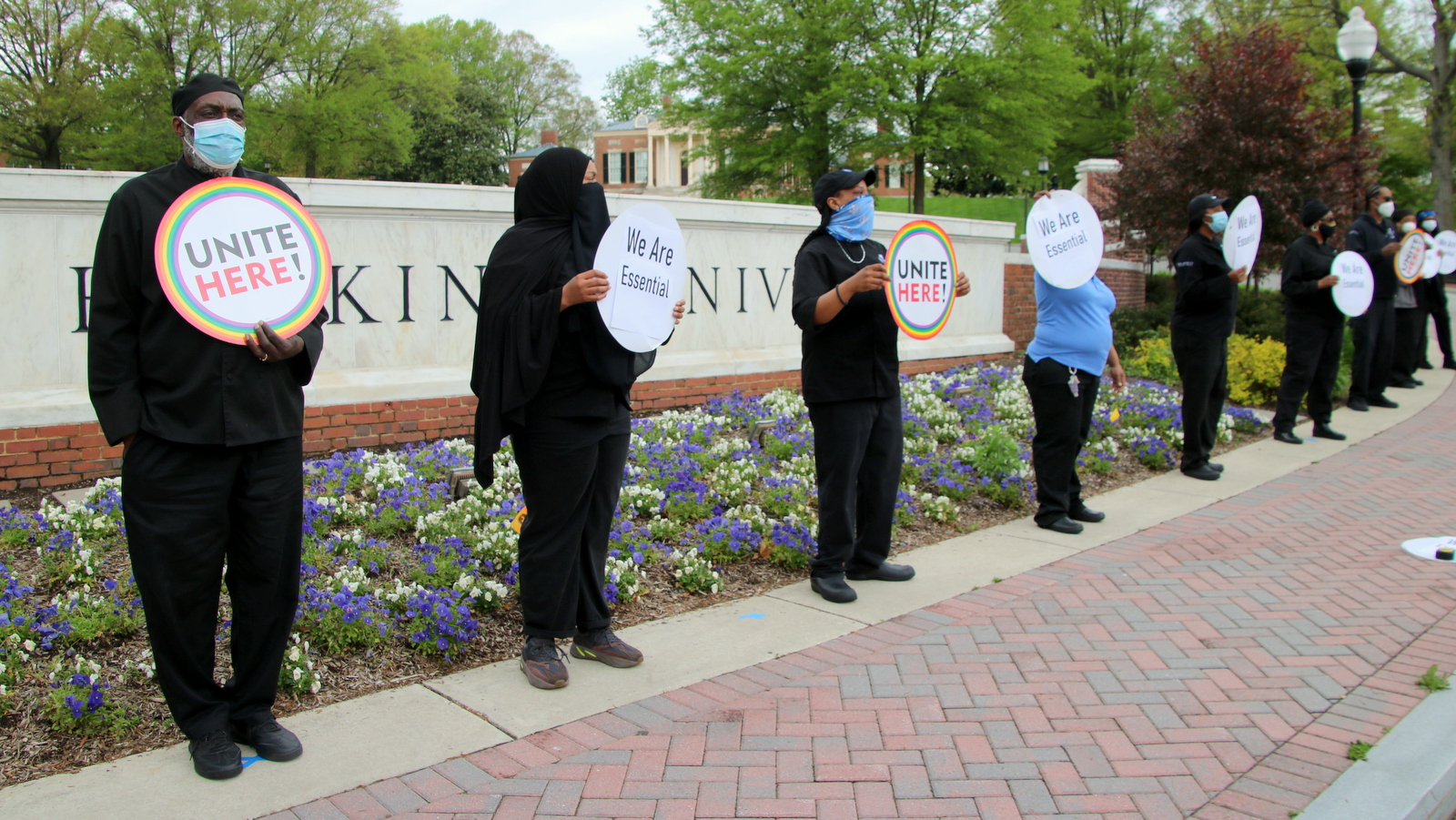 JHU: “We have not reversed course”

The demonstration was one of many taking place across the country on May 1, International Workers’ Day, to protest the treatment of employees during the outbreak.

Warehouse workers and grocery employees at Amazon and its subsidiary Whole Foods, gig workers for Instacart and Target-owned Shipt, and others banded together to walk off the job or hold protests.

In response to the Baltimore food service workers, who are employed by contractor Bon Appetit, Hopkins today denied that it had broken a promise.

“We have been having substantive and meaningful discussions over the last month with their employer and their representatives,” spokeswoman Karen Lancaster said in a statement. “We have not reversed course, but instead have been exploring the most beneficial options for these valued team members through their employer.”

The university is taking “great care” to avoid interfering with employees’ eligibility for financial benefits through the CARES Act, a JHU spokesperson said.

The university is “taking great care to avoid interfering with their eligibility for the comprehensive financial benefits through the CARES Act, which provides enhanced unemployment compensation benefits through July 31,” Lancaster said.

Any wage payment could reduce the CARES payout to workers by interrupting or delaying their unemployment benefits, she stated.

JHU is moving ahead with a Covid-19 relief fund, which was announced last week to support employees facing Covid-related hardships.

Palmer said the workers worry that as contract employees they may not be covered by that mechanism.

Last month, Hopkins announced a number of austerity measures after estimating the university and its medical system will have to cut costs by $475 million through June 2021.