After word got out that Ed, the Filbert Street Garden’s baby goat, had been snatched in the night, there was consternation across Baltimore, with people hoping for the best, but fearing the worst.

Did the the two teenage boys who broke into the popular community garden in Curtis Bay plan to eat the eight-month old animal or, worse, abuse it?

But after Ed was returned unharmed last night a little before 10 p.m. (under circumstances that garden managers are trying to keep a bit vague), it doesn’t seem like the motivations were terribly dark.

“He was freshly bathed! When I picked him up and was kissing him, I could smell the soap!” said the Garden’s animal caretaker, Charles DeBarber.

Baby goats may be cute, DeBarber noted, but they also urinate, defecate and make a racket.

“I think they tried to bring him home and make him an indoor pet and realized that wasn’t going to work.” 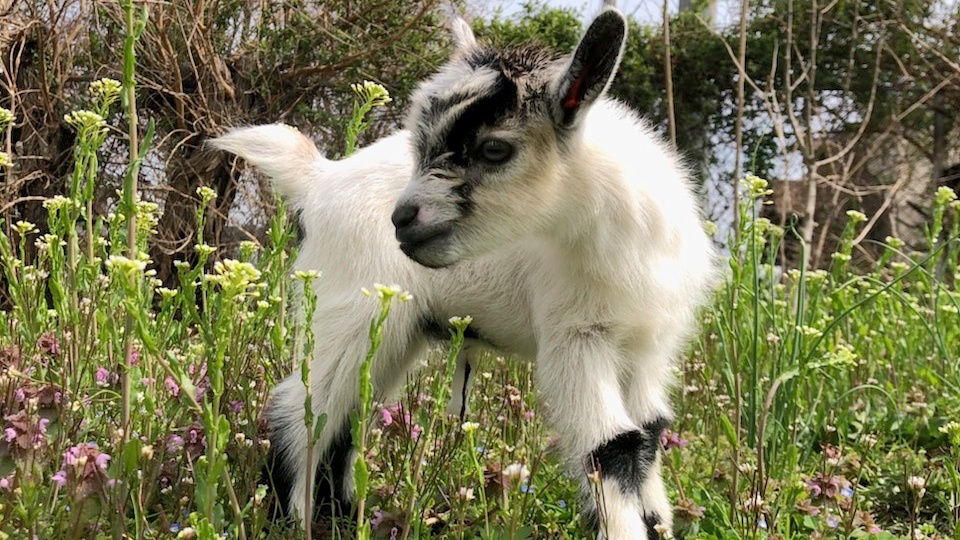 By the end, there was a $500 no-questions-asked reward out for the safe return of Ed, the Filbert Street Garden’s baby goat. (Henry Scott)

“The heat was on”

Meanwhile, the story of the “kid”napping – including a heart-rending video with Ed’s mother, Cheese, bleating in anguish – was circulating widely on social media. The theft had been reported by The Brew and picked up by other media and was featured by the local television news.

The reward being offered for his safe return had jumped from $300 to $500, after half a dozen people emailed DeBarber offering to boost the fund.

“I mean, it was on the live news, the police were driving through the alleys looking in the backyards” – Charles DeBarber.

Baltimore Police’s Southern District “was very excited” to join the search, said DeBarber, who spent hours driving around nearby neighborhoods, trying to spot young Ed, who had not been weaned and was sure to be hungry.

“I mean, it was on the live news, the police were driving through the alleys looking in the backyards,” he said. “The heat was definitely on.”

Back at the garden, where the goats live alongside chickens, ducks and hives full of honeybees, Ed’s mother was beside herself.

“She kept looking behind benches and bushes to try and find him.”

Without getting into details, garden managers credit the police with getting Ed back home safely.

“One of their detectives was posing for pictures with him – they’ve never had anything like this happen,” DeBarber said.

Someone, presumably his captors, put Ed back in a cardboard box and left him in the woods near the water tower beside the garden.

A couple, who declined the reward, found him, according to Marvin Hayes, manager of the Baltimore Compost Collective, located at the garden. 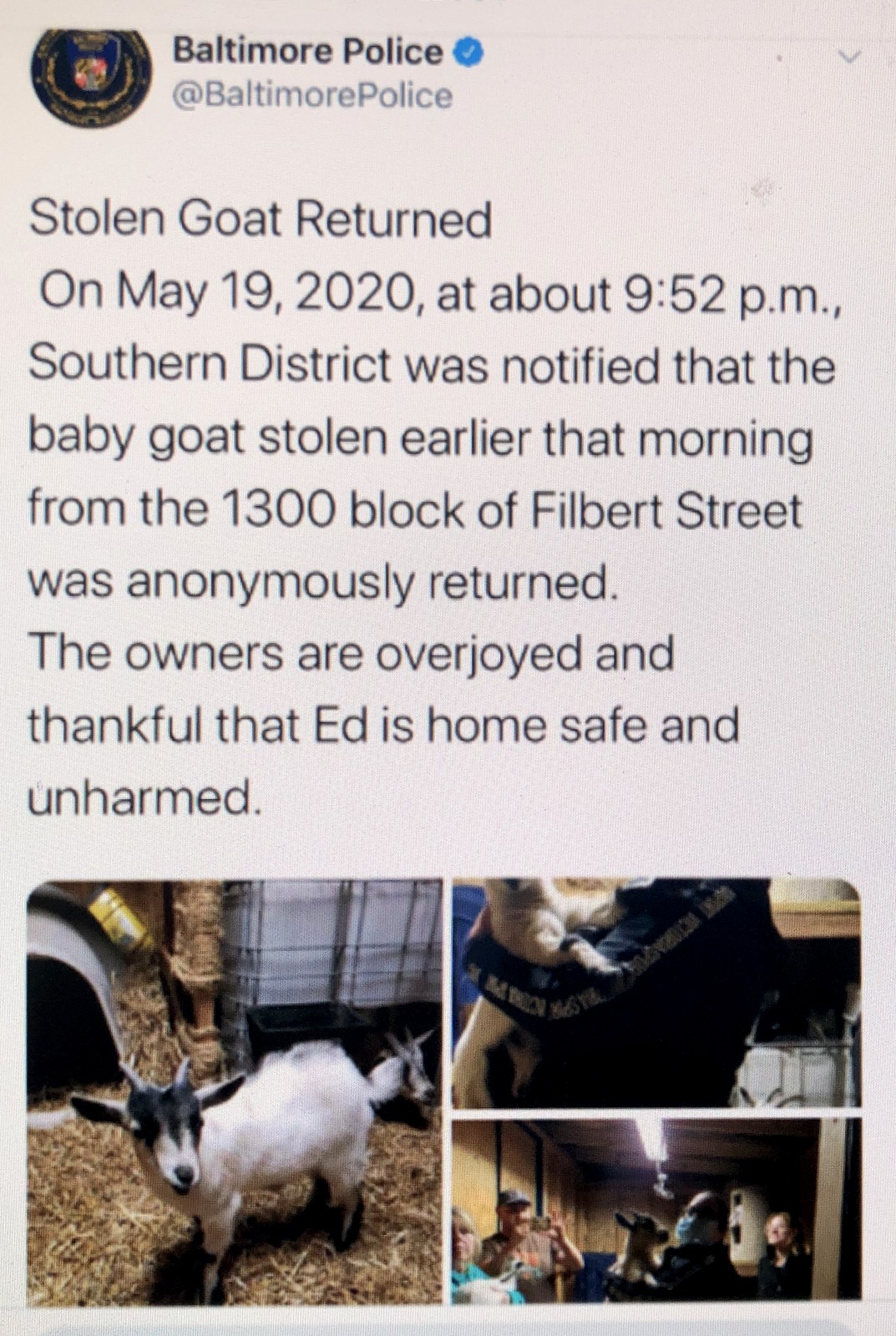 Baltimore Police announce on Twitter they cracked the case of the purloined goat. (@BaltimorePolice)

A Line Not Crossed

Since Ed was reunited with his mother, he’s reportedly drinking milk as normal and none the worse for wear.

The Filbert Street Garden will be getting stronger fencing and security cameras thanks to an online GofundMe that crowdsourced its goal of $1,000 within hours. (Check their Facebook page for details on efforts to fortify the place, build play structures for the goats, etc.)

Meanwhile, DeBarber is reflecting on what the outpouring of civic outrage over the theft of a 20-pound goat means in a city with so many troubles and so much violence that is committed, condoned or endured.

He concluded that it is really encouraging:

“What I take from this is, you could be the hardest person in Baltimore, but if you hurt an animal, you’re a piece of shit. If you hurt somebody like Ed, nobody will like you. You have crossed a line.”