Her filled-out ballot in hand, Debra Joseph went to Hampden Elementary School today, knowing it is one of the places in Baltimore where state election officials are adding dropoff boxes for people to cast their vote in the 2020 primary.

But when she got there, another woman holding a ballot envelope told her not to bother:

There was no dropoff box at the school.

That was still the case this afternoon when The Brew stopped by the building, located in the 3700 block of Chestnut Avenue.

Joseph and the other voter had good reason to have gone there.

The State Board of Elections, under fire for what critics said were inadequate provisions for city voting during this unusual mail-in only election, announced earlier this month that there would be 10 more places in Baltimore to dropoff ballots before the June 2 primary.

But they didn’t specify when the extra dropboxes would be installed.

Last Thursday, city election officials offered an answer: They tweeted that the dropboxes would be in place by May 29 (meaning today).

But later in the day came another tweet: The boxes would not be installed until May 30 (meaning tomorrow). That’s four days before the June 2 primary.

All this generated confusion. 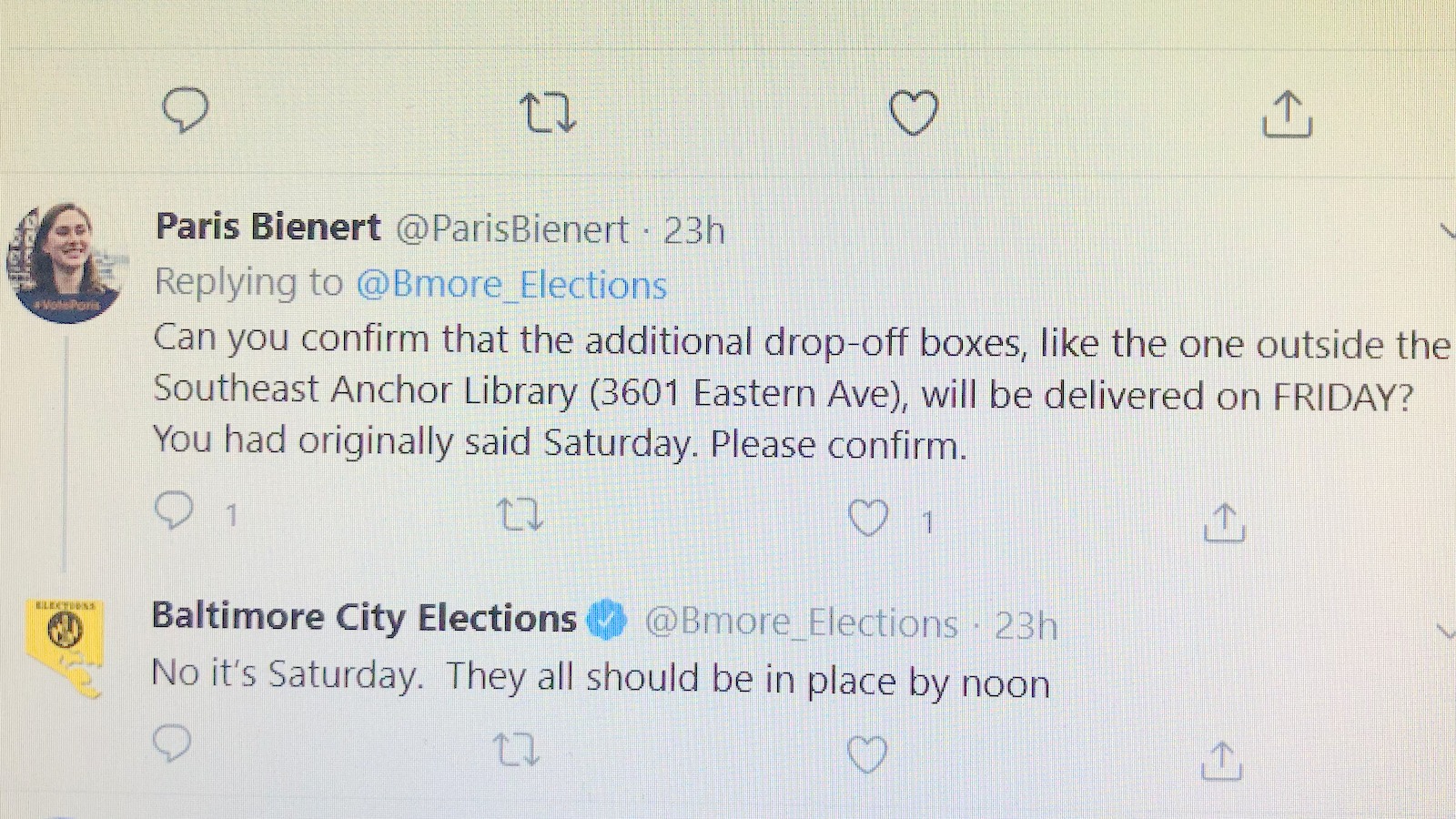 Wanting to be sure her vote was properly postmarked and counted, Joseph was determined to put her ballot directly into a dropbox or post office mailbox.

She wound up driving to Baltimore’s main post office on Fayette Street. But she was not happy with the fact that the promised dropbox nearer her home was not in place.

“The Board of Elections is a piece of work – this is typical,” fumed the North Baltimore resident, who has served as an election judge in the past. “They never get you the information you need. It always comes at the last minute. Or, like, the day after the election.”

The other woman who tried to drop off her ballot at the school was similarly frustrated.

“She said she asked and found out the principal had absolutely no idea they were supposed to have a dropbox there,” Joseph said.

The dropbox delay is just one of many glitches and lapses that have marred the election. The most egregious has been the delay in getting ballots to voters.

Ballots began going out statewide at the end of April, but Baltimore’s ballot, which election officials had said were being mailed on May 8, actually went out on May 15.

The mailing delay “endangers the voting rights of the people of Baltimore,” City Council President Brandon Scott said in a letter to the Elections Board calling for a public hearing and explanation. 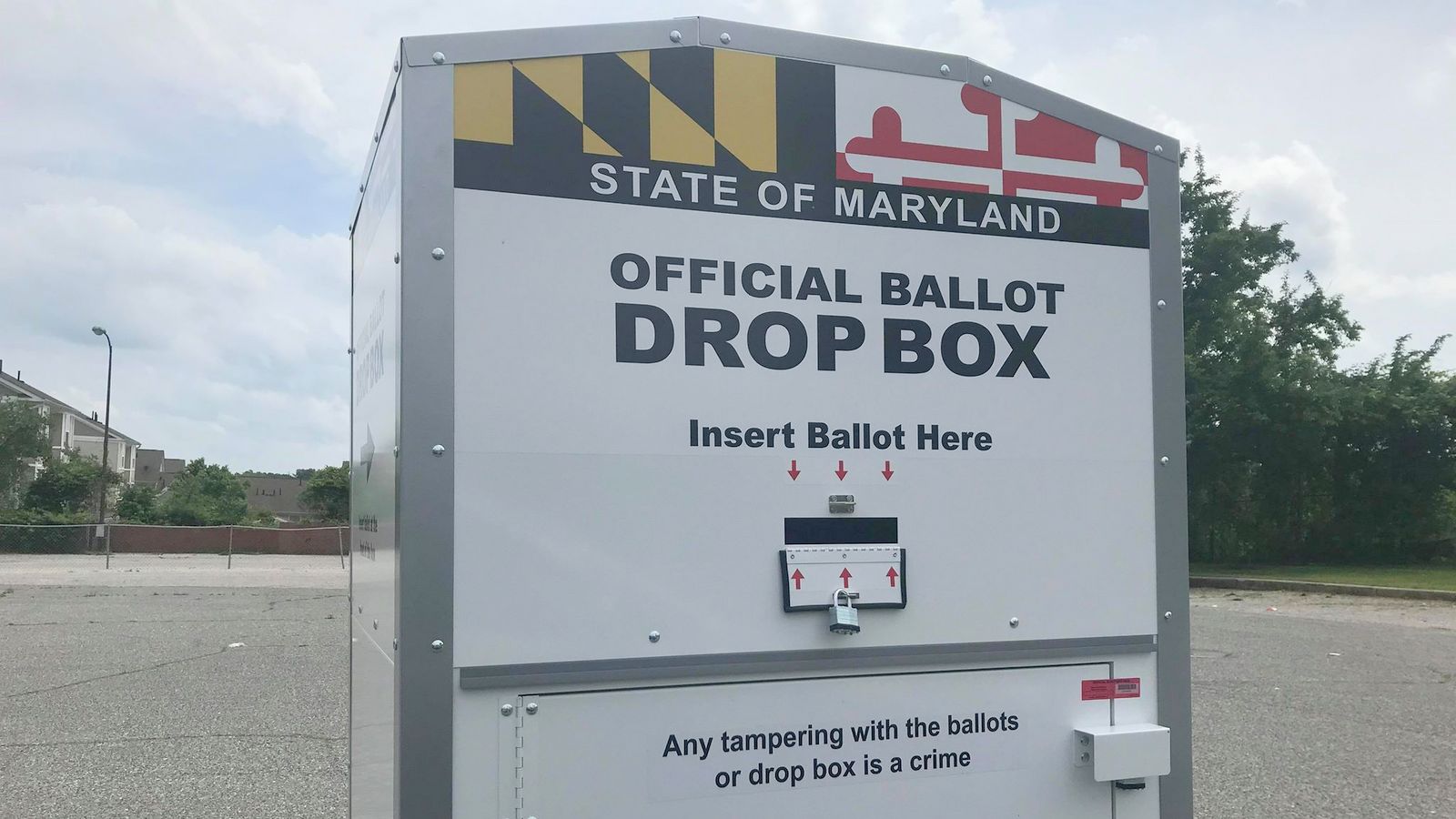 Asked today to explain the delay, Baltimore’s director of elections, Armstead B.C. Jones Sr., had no answer. “You can address your question to State Board of Elections. I have no comment,” he said.

Asked to explain the delay, Baltimore’s director of elections, Armstead B.C. Jones Sr., had no answer.

Currently there are five dropboxes open in the city:

In addition to Hampden Elementary Schools, additional dropoff boxes are promised to be located – starting tomorrow – at: