Following the weekend’s march and demonstration in the wake of George Floyd’s death in police custody in Minneapolis, Baltimore’s mayoral frontrunners spoke against police brutality and affirmed citizen’s right to protest.

“There is an incredible amount of pain running through our country right now, and I understand that,” Young said. “I’m angry and frustrated and fed up.” 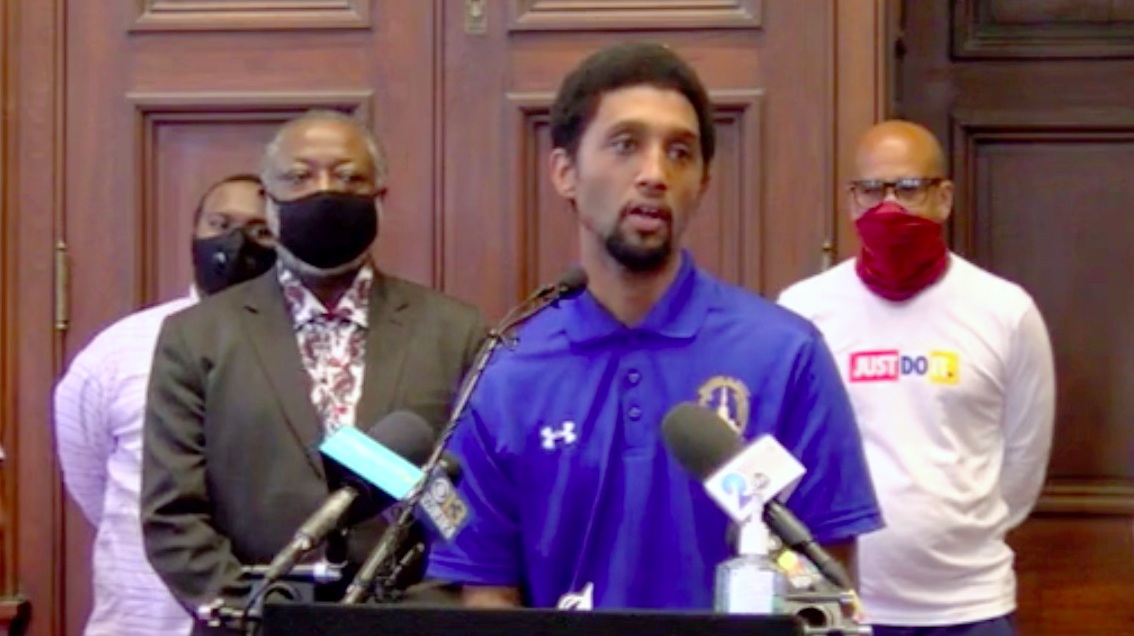 “We shouldn’t have people dying at the hands of the police,” City Council President Scott said in a statement Saturday. (CharmTV)

It was a rare moment of collaboration for the two, who have frequently clashed as they compete in the June 2 Democratic primary.

“Baltimore, I come before you today not just as your Council President, but as a tired young black man,” Scott said.

Scott was seen outside of City Hall last night as hundreds thronged the plaza in front of the building and maintained an edgy standoff with city police clad in riot gear.

Young, who did not make an appearance at the scene, sent tweets last night condemning “agitators” and encouraging citizens to be “peaceful and productive” and finally to just “go home.” 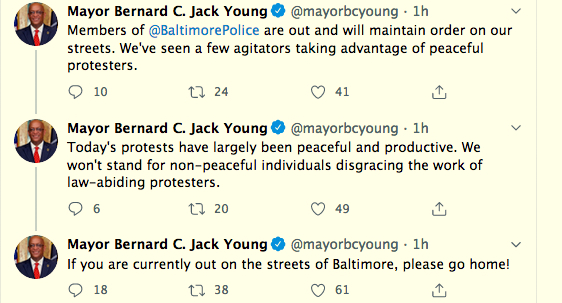 Here’s what some other Baltimore mayoral candidates had to say:

Dixon: “I stand in solidarity”

Former Mayor Sheila Dixon, writing on Twitter, said she is praying for the city and nation. She was one of the only candidates to address the need for physical distancing as the protests coincide with the coronavirus pandemic.

“Protesting is a powerful tool for demanding justice and expressing dissatisfaction with systems that have failed black and brown communities far too many times,” she wrote. “I stand in solidarity with those protesting peacefully but urge participants to not destroy resources/stores that support our community.”

“I will continue my commitment to work diligently to dismantle systemic injustices,” she continued. “Please stay safe and practice social distancing while out. Let’s lift each other up in these trying times.”

Mary Miller, whose association with a PAC trying to get her elected by targeting the white vote has brought her under scrutiny, perhaps had extra pressure to issue a strong statement on Floyd’s death and police misconduct.

In an email to supporters, she called the unarmed Minneapolis man’s death after a city police officer knelt on his neck for over eight minutes “murder.”

“The thoroughly justified anguish and outrage Black Americans across this country – and in Baltimore – are feeling after the murder of George Floyd and centuries of oppression, serves to remind us that police brutality and racism are still with us.”

She continued. “I support the right to protest for change. In the coming days, I pray for peaceful protest here in Baltimore, and I pray for justice for George Floyd. In the long term, I pray for a culture where Black people do not live in fear of their neighbors or those meant to protect them, where law enforcement coexists and engages safely with communities of color, and where Black Lives Matter.”

“I’m also taught that faith without works is dead,” Miller said, pivoting to her familiar campaign pledge to promote “systems of accountability” as mayor, such as the current consent decree between Baltimore Police and the U.S. Department of Justice.

Thiru Vignarajah, who has vigorusly campaigned on a pledge to reduce violent crime in Baltimore, had this to say on Twitter:

“Some cases do not have two sides. The murder of George Floyd should be charged, prosecuted and discussed as what it was – a ruthless murder. The anger across the country is deserved. A man’s life was snuffed out on camera, echoing countless scenes as old as American history.”

Vignarajah later touted his connection to Gary Tuggle, Baltimore’s “renowned” acting police commissioner for 11 months (May 2018 to March 2019) who has endorsed his candidacy.

Smith: “I felt a lot of that pain”

“Even before George Floyd was murdered, this week has shown us how racism and implicit bias rears it’s ugly head,” he tweeted, linking to an earlier Instagram post in which he talks about the black man birdwatching in Central Park who a white female dogwalker called the police on.

“I’ve been pulled over by the police as the police and questioned about why I’m in a certain area,” Smith said, also describing an incident 20 years ago in which he said he was  “profiled” and stopped for alleged shoplifting.