Protesters filled the streets of Baltimore this evening, a youth-led march that delivered its message against police brutality with chants and flags and signs, but most of all in sheer numbers.

The crowd of thousands rivaled the protests that took place in April 2015 after the arrest and death of Freddie Gray while in police custody.

“It ain’t start with us, but it will end with us,” the banner at the head of tonight’s march read, as it began at the Baltimore Convention Center. 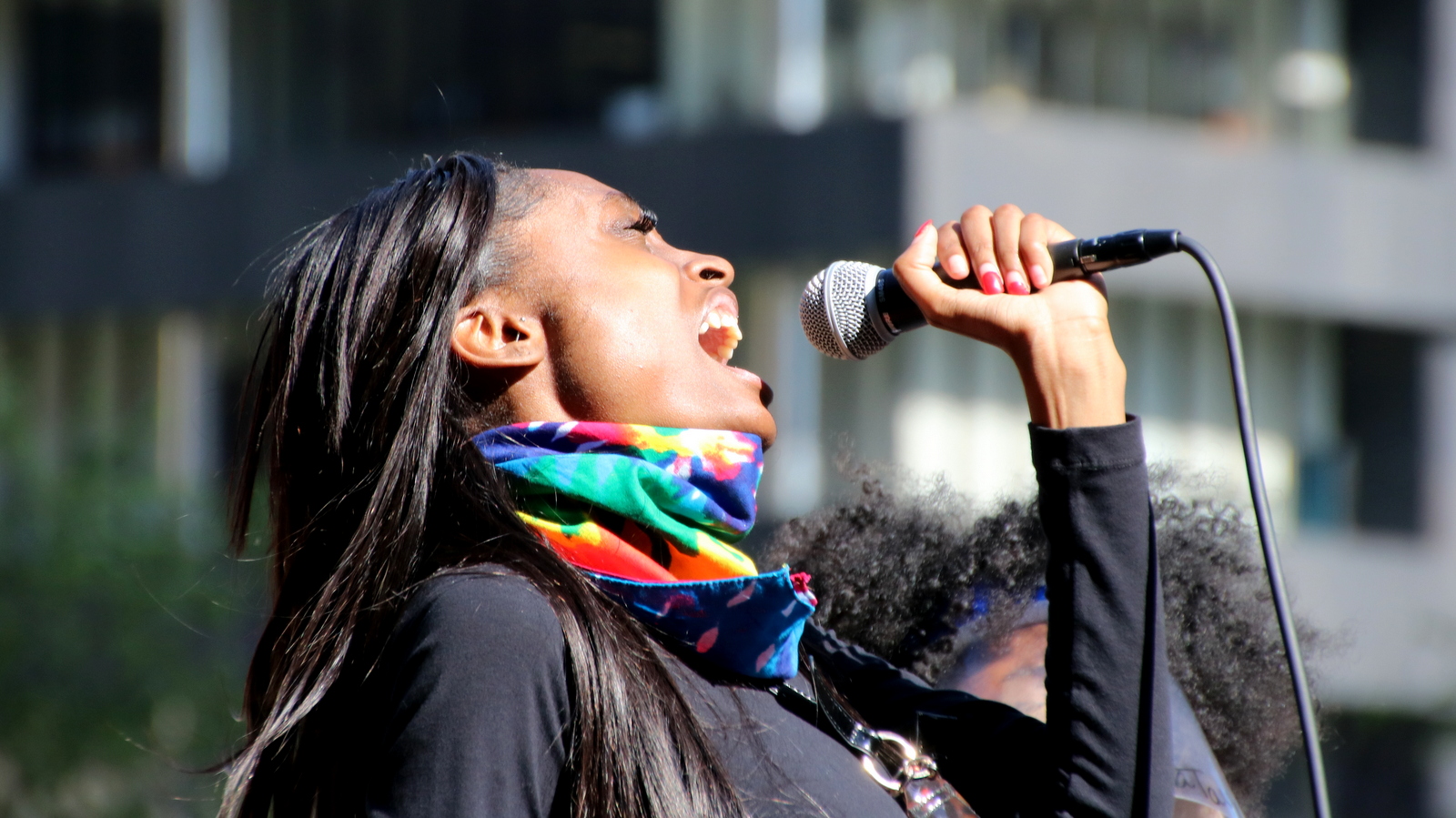 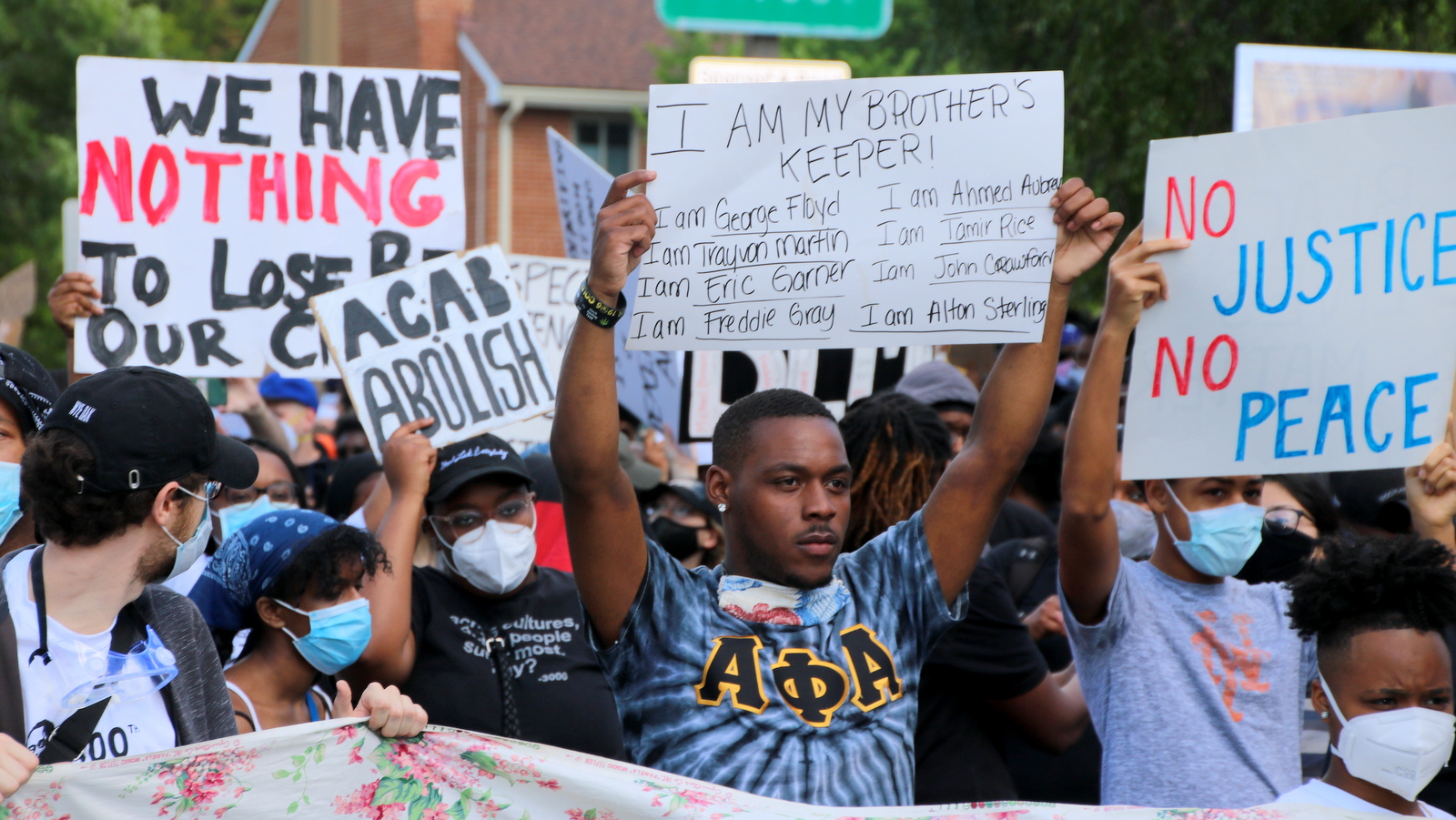 Anger over white supremacy and police brutality boils over at a march in Baltimore. (Louis Krauss)

It was the fourth day of protests in Baltimore, sparked by the death of George Floyd, a black Minneapolis man who died after a police officer knelt on his neck for over eight minutes.

Tonight’s crowd was sprawling and diverse but focused and on message.

“Destroy White Supremacy,” one sign read. “Who do we call when the police murders?” asked another. “Justice for our slain.”

A five-year-old girl, Nevaeh Aspden, held up a sign that said, “White allies: use your privilege to amplify black voices.”

Held the day before the primary election, the march drew two mayoral candidates, who appear to have had very different experiences judging by social media.

One showed City Council President Brandon Scott wearing a mask with the logo for the violence prevention group Ceasefire as he praises the young organizers of the march. The other showed former prosecutor Thiru Vignarajah being mocked and chased off by a group of people.

Starting mid-afternoon at the Baltimore Convention Center, the action was kicked off by protest organizers and speakers that included activist Tawanda Jones, the brother of the late Tyrone West, who died in police custody, and Kelly Davis, who’s the wife of Keith Davis Jr., the man who was shot by police in 2015 and was later convicted of killing a Pimlico Race Course security guard.

One 16-year-old told the crowd that she and four other teenagers organized the protest via text messages.

“This is possible, and change is not impossible, don’t let anybody tell you differently,” she said from a back of a truck to the sea of protesters. 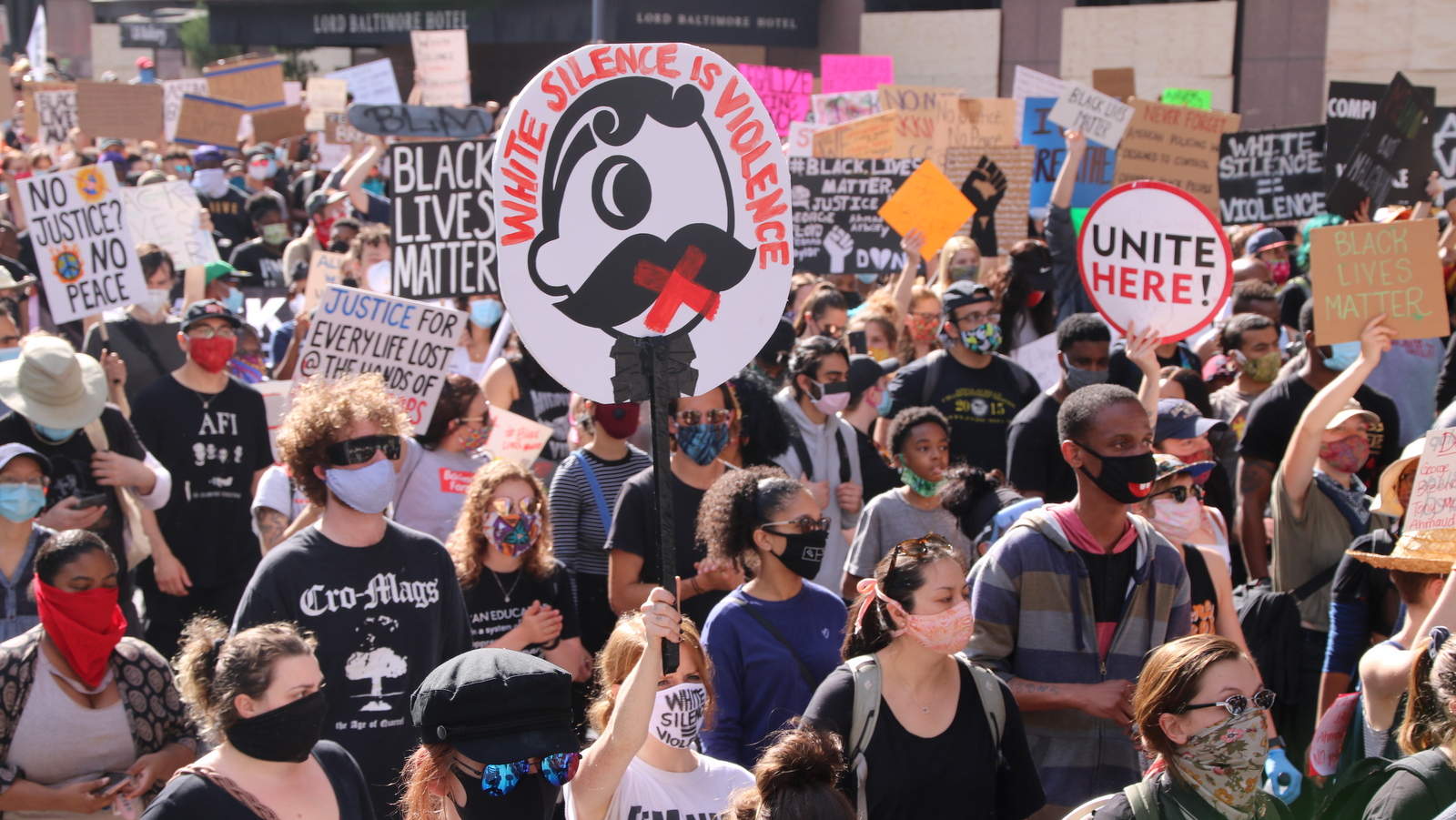 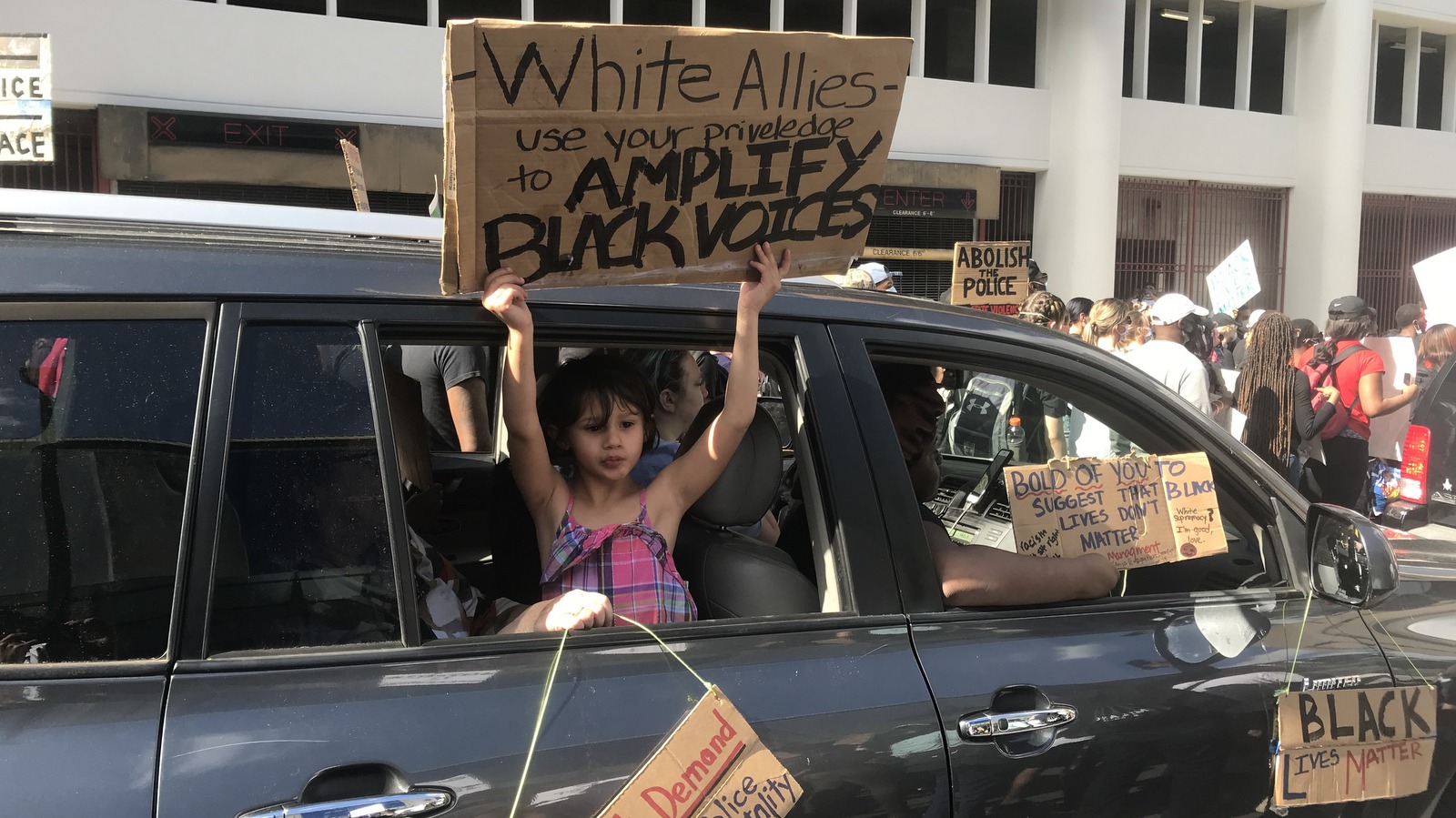 Making their way along Gay Street, the crowd began filing up on the ramp to I-83, walking along until they reached the Central Booking and Intake Center, where protesters chanted, “We love you,” to the prisoners inside.

For a time, the expressway was completely shut down in both directions. 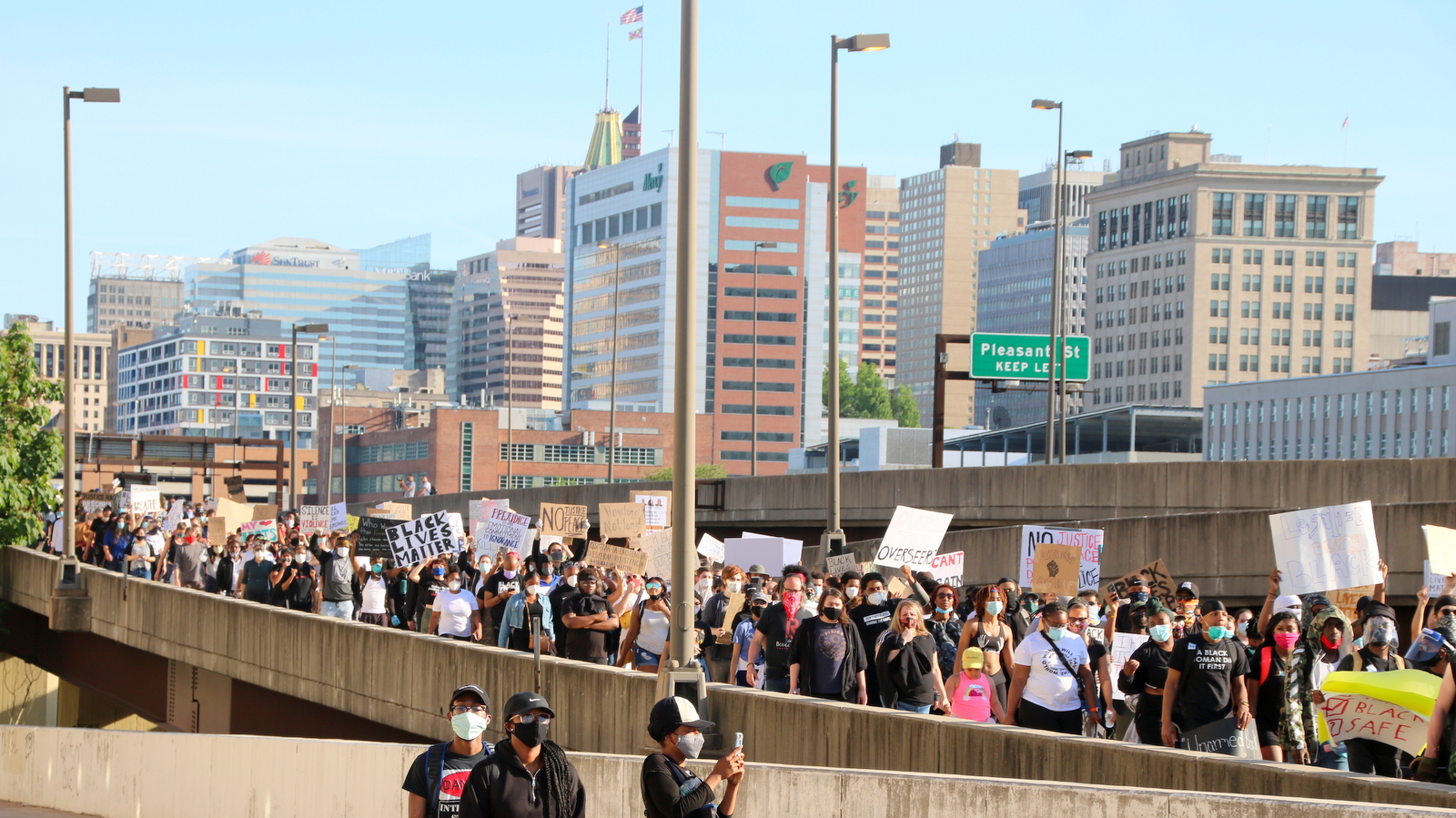 Police stayed in the background, allowing the marchers to take over the Jones Falls Expressway. (Louis Krauss)

Compared to Saturday’s protest, the crowd was more heavily composed of young adults and teens, several telling The Brew that after seeing the video of George Floyd’s killing in police custody they felt compelled to join.

“I got so emotional when I saw the videos yesterday morning. Something has to give,” said 26-year-old Amber Carson, who works at Royal Farms. “I feel like police are listening, they hear us, but nothing’s going to change. I don’t know, I’m not confident it will improve at all.”

“It’s ridiculous, my six-year-old daughter was worried about her dad coming out to this protest, thinking he might get shot because he’s a black man,” Kearney said.

“Nothing’s going to change, no matter how many times we do this,” she said. “We can burn every building, fight, scream, cry, nothing will change.” 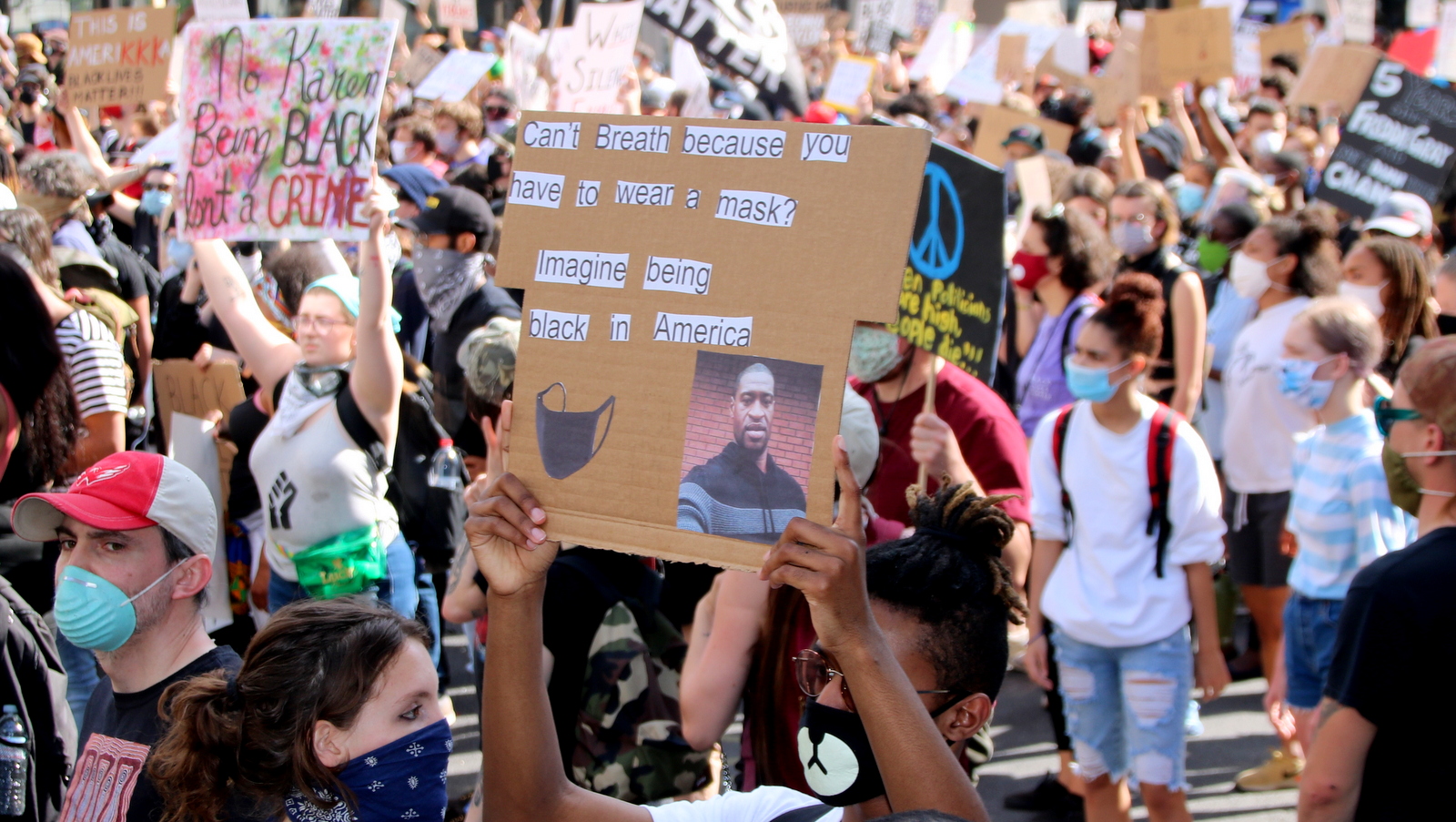 George Floyd, like others during fatal encounters with police, was heard to say, “I can’t breathe.” (Louis Krauss)

David Thomas, a 26-year-old from East Baltimore, was more hopeful. Sitting on a jersey barrier beneath I-83 as protesters walked by, he said he was outraged by the death of Floyd and other black people at the hands of police.

But Thomas, who is black, said he has had no bad interactions with police and would actually like to become an officer in order to fight against racism and improve the culture in police departments nationwide.

“If I had the opportunity to change something and I could be a cop, I would, because I could change things for the better,” said Thomas, a commercial truck driver. “Right now, they have peoples’ lives in their hands, and some of them just don’t care.”