On the morning after the biggest demonstration Baltimore has seen in years, police were reporting that six people had been arrested on minor charges.

Four people were charged with failure to obey, including a 74-year-old Baltimore woman. A Dundalk man was arrested for throwing fireworks, and a 37-year-old city resident was “arrested while carrying a long gun,” according to the statement released by Baltimore Police Department today.

During a day in which large crowds chanting “No justice, no peace!” marched in memory of George Floyd – the black Minneapolis man killed after a police officer knelt on his neck for more than eight minutes – Baltimore police stayed mostly in the background. 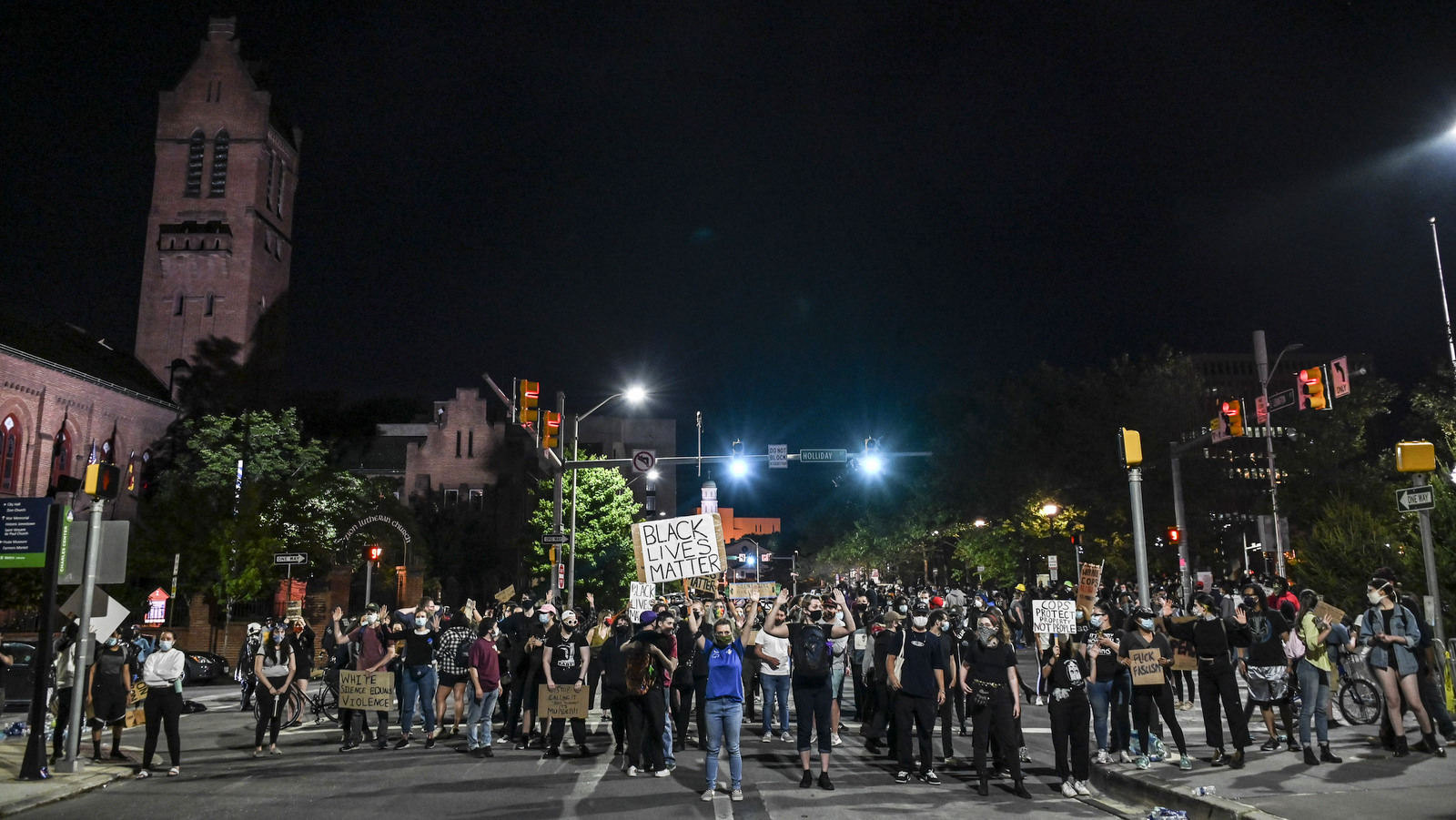 Protesters at the corner of South and Baltimore streets. (J.M. Giordano)

Police messaging on social media, however, prompted some criticism, especially a Tweet posted by @BaltimorePolice at 2:29 p.m. that said:

“The BPD is committed to protecting rights and facilitating peaceful protests to ensure the safety of everyone. Small stashes of potential weapons have been located. If you see something, say something.”

Some questioned the reference to “stashes of potential weapons” having been located. “Show us,” Black Lives Matter activist DeRay Mckesson tweeted back. There was no reply from police.

Protesters were able to march without incident through city streets, at one point shutting down I-83 in both directions.

At War Memorial Plaza, the crowd continued the demonstration in front of City Hall, calling for an end to racist policing and reciting the names of other unarmed black people killed by police – Ahmed Aubrey in Florida, Breonna Taylor in Kentucky and many others.

• A vivid description of last night, tweeted by activist @SefuChikelu .

About 9:30 p.m., a group of demonstrators headed south from City Hall toward the Inner Harbor, but were stopped at Baltimore and Commerce streets by city officers in riot gear.

An uneasy truce ensued for the next two hours. Fireworks were thrown at police and, at one point, one of the throwers was chased by members of the crowd.

“He was lighting fireworks. Lock his ass up,” said Kwame Rose, a prominent activist during the Freddie Gray “Uprising” in 2015.

Rose grabbed the protester by his shirt and dragged him to the police past the barricades at City Hall. The incident was recorded by Brew photographer J.M. Giordano.

About 11:45 p.m., a battered pickup truck with signs promoting the City Council candidacy of Rodney Hudson turned up on Baltimore Street.

Rose commandeered the loudspeaker in the truck and spoke to the crowd:

“If you do not want to go to jail, go home. . . Go home! We proved our points,” he said. “We did what we came here to do tonight. Do not turn this into something it does not have to be.

“I’ve been when you at five years ago. I’m telling you, tomorrow we come back and show again. Don’t give them what they’re looking for. Don’t give them another excuse. Let’s go. Let’s get home!”

Some later praised his actions saying Rose had prevented an escalation that could have turned violent, while others were horrified to see a leader of the action handing someone over to the very police being denounced by the protesters.

As the crowd melted away on Baltimore Street, Rose ran to another knot of protesters on South Street. When this group failed to disperse, police charged, pushing about 100 demonstrators up Guilford Avenue to Lexington Street.

Under the shadow of Courthouse East, most of the protesters left. The handful that remained lingered without incident at the intersection until after 1 a.m., according to Giordano. 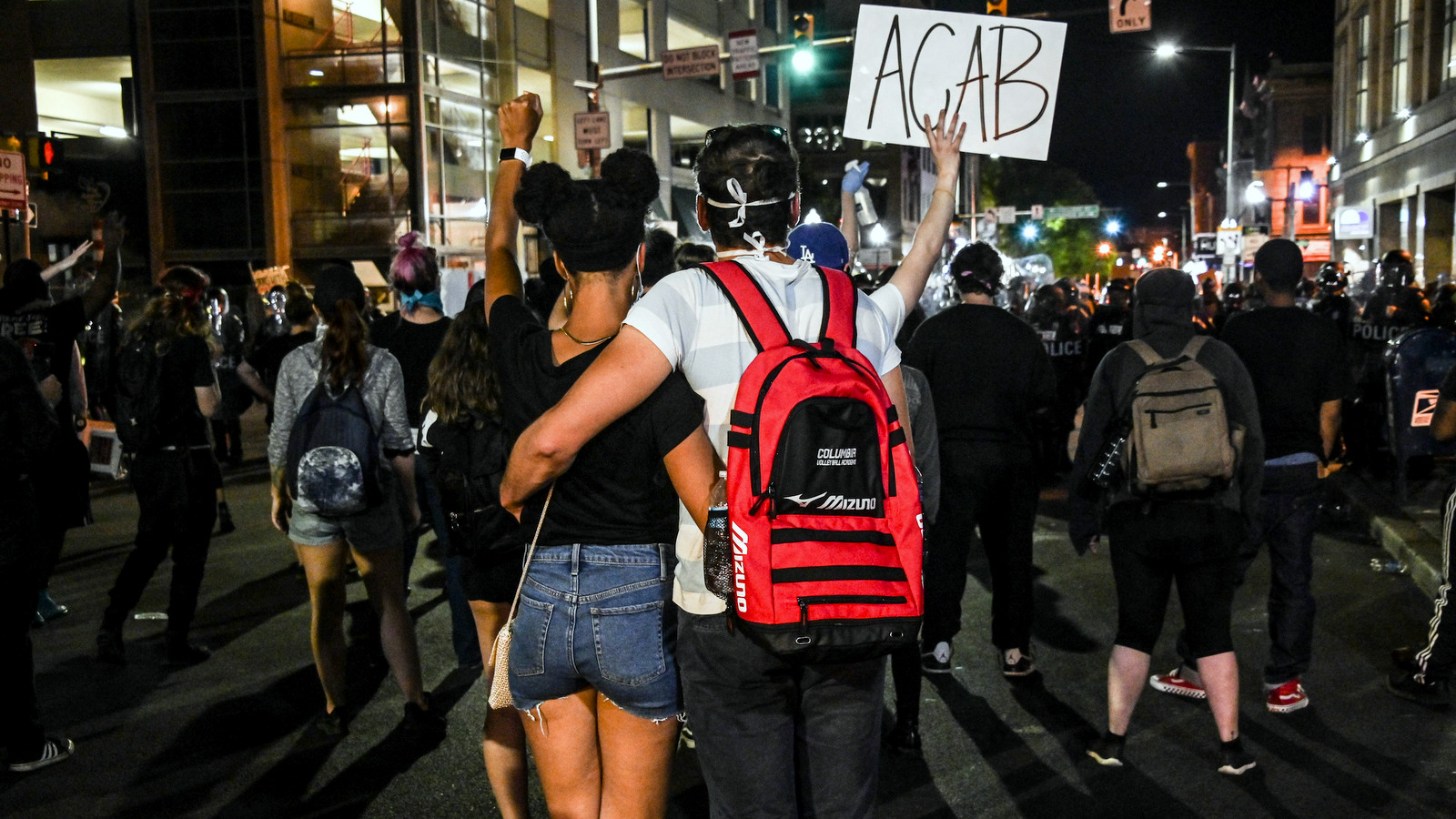 On Baltimore Street, a young couple participate in the protest. (J.M. Giordano)