The priest who demanded last week that state health officials supply more Covid-19 tests to Baltimore’s hard-hit Latino community, says they have not done so – and again called on Maryland Gov. Larry Hogan to act.

While Rev. Bruce Lewandowski spoke outside Sacred Heart of Jesus Church in Highlandtown, people stood in a line that stretched down the block, waiting to get a free Covid-19 test – a weekly program Lewandowski says has been drawing hundreds.

“Governor Hogan, your offices are saying through the news, ‘If anyone in Maryland wants a test they can get it,’” Lewandowski said. “The truth is. . . the city doesn’t have tests, and you’re not giving them enough.”

He described a parishioner named Leo – “a hardworking man,” the father of two teenagers – who collapsed while waiting in line for a Covid-19 test last week. He was taken to Johns Hopkins Bayview Medical Center where he remains in critical condition.

“Right now, the city of Baltimore says to us, ‘We don’t have tests,’” said Lewandowski, a member of the clergy and community group BUILD.

He stood with other church leaders demanding a face-to-face meeting with the governor to discuss the needs of their congregations during the pandemic. More affluent communities, he believes, have greater access to tests than poor Latino and African-American neighborhoods.

“Show us how many tests go to each jurisdiction in Maryland because no one knows that,” Lewandowski said. 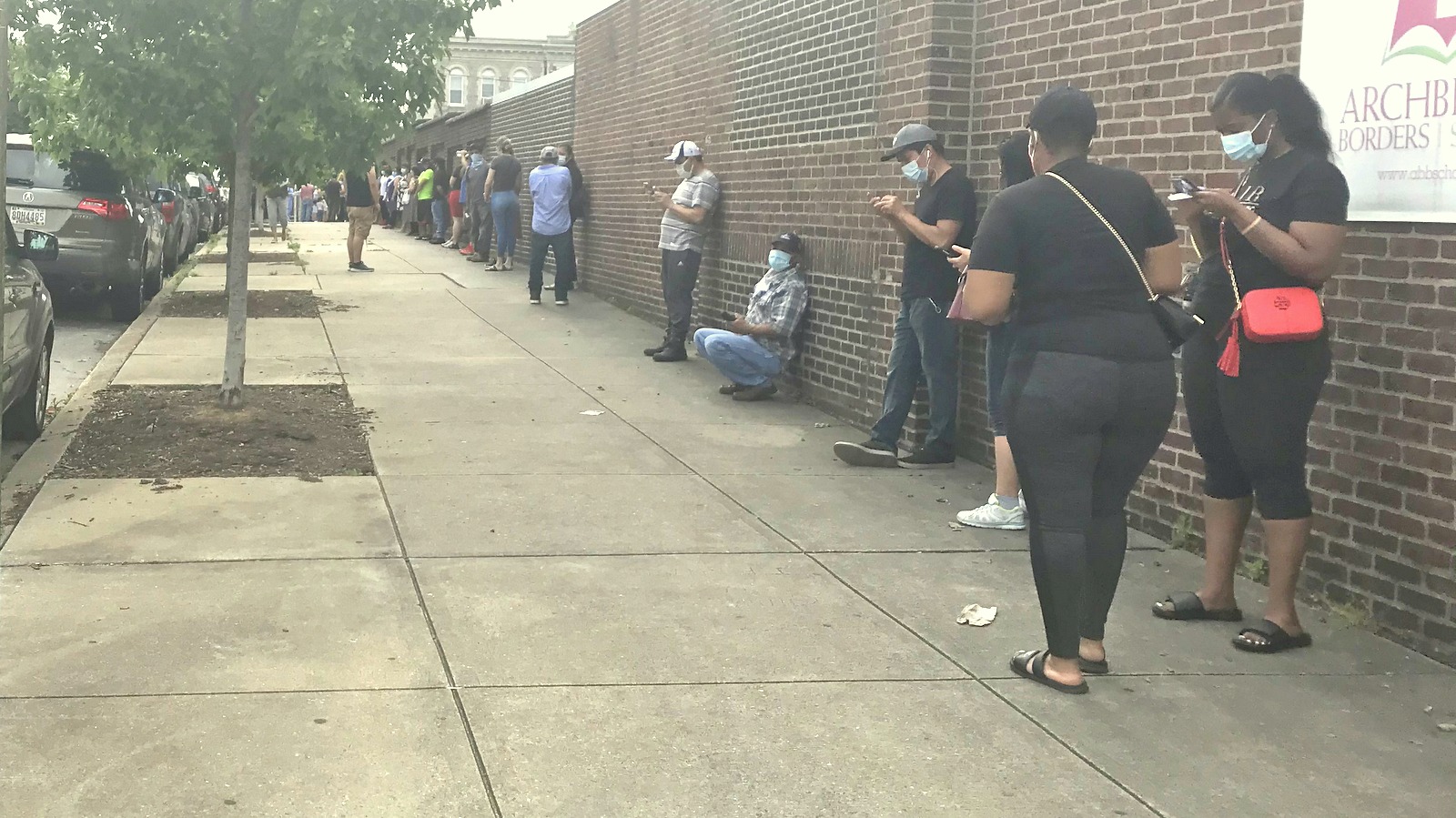 A Need Across the City

Among those joining him to address a group of reporters was the Rev. Dante Miles, a pastor at Koinonia Baptist Church in northeast Baltimore.

“Gov. Hogan, Jesus is saying to you, ‘Take the knee of lack of testing off the neck of the least of these, so our black and brown brothers and sisters can finally breathe,’” Miles said.

Pastor George Hopkins, of the Sowebo Community Church in southwest Baltimore, raised the issue of the recent protest marches in Baltimore following the death of George Floyd at the hands of Minneapolis police.

If people walking in close proximity were exposed, insufficient testing could result in more deaths in the future, he said. “If there are people being turned away now, how will there be enough tests for the thousands who are marching?”

Yesterday the line was somewhat smaller than in the past: approximately 110 people. The city health department, which runs the test site, administered 96 tests, said its director of communications, Adam Abadir.

According to Lewandowski, they had the same number of tests on hand as always: 100-150.

It was unclear whether people were turned away, as they have been in previous weeks, because supplies ran out.

A Brew reporter, who was not permitted to enter the test site, saw two teenagers turned away because the site had closed for the day. Lewandowski said he saw a dozen turn up after the health department team left.

Baltimore Health Commissioner Letitia Dzirasa, who was at the site yesterday morning, said the city is “ramping up capacity as much as we can.”

She did not say whether the number of test kits provided to the site was increased in response to the demands from Lewandowski and BUILD (Baltimoreans United in Leadership Development).

“I think we’ve done a phenomenal job of making testing accessible, especially in communities we know are hardest hit, such as the 21224 neighborhood and Latinx community,” Dzirasa said.

Speaking for the Maryland Department of Health, Charles L. Gischlar would not say whether the church program had been given additional tests. “We have offered as many tests as the city needs to help this site,” he said in an email.

Ferguson: Why Not More?

Senate President Bill Ferguson, also present at the church, said he is trying to understand the causes of the problem.

Asked whether the state should ramp up testing in Baltimore where he represents the 46th District, Ferguson said, “I’ve not been given a compelling reason why not. If people are lining up for a test, they should receive one.”

“If people are lining up for a test, they should receive one”  – Maryland Senate President Bill Ferguson.

Leandowski said Dzirasa would be meeting with him this week. The pastors said Lt. Gov. Boyd Rutherford also plans to meet with BUILD and visit the church later this week.

But Lewandowski said he’s not satisfied and wants to meet with Hogan face-to-face.

While standing in line, Jesus Castaneda, 36, said he was there because a coworker at his restaurant tested positive for Covid-19.

“I’m wary because I have my family, and the work I do is close quarters,” Castaneda said. “We have masks and everything, but you never know.”

Jesus Castaneda said he was there to get tested because a coworker at his restaurant tested positive for Covid-19.

Many waited over an hour for testing, and Castaneda said he was concerned about how close some people were standing in line.

He said it would be beneficial for the state to provide more kits to the city so that more community testing sites could be set up. “Having more tests would definitely be good. There should be more sites like this.”