Happening almost every night for weeks in parts of Baltimore, a barrage of loud fireworks – some of them lighting up the sky with a cascading display – has been puzzling residents and causing complaints.

Sylva Lin, who lives in Union Square with her husband, said the explosions sometimes continue until the early morning, keeping them awake and rattling their pets and neighbors.

“These aren’t just fireworks, they are mortars going off every night,” Lin said, questioning why city officials haven’t put a stop to it. “I’m amazed, because you look at all the Nextdoor posts – and everyone is asking what the hell is going on?”

Across town in northeast Baltimore where WEAA talk radio host Kaye Wise Whitehead lives, the blare and boom of fireworks have been plaguing her neighborhood “every single night without fail, starting around 9:30 and ending just before midnight.”

“It is making me very angry,” said Whitehead, whose family typically sits in the backyard at night, but now retreats inside the house when the explosions start. “What is unnerving is that they sound so much like gunshots that it is hard to be comfortable.”

When Whitehead posted about the fireworks recently, she was surprised to see how many different neighborhoods chimed in. Among them were Woodberry, Howard Park, Yale Heights, Harwood, Druid Heights – and even Parkville. 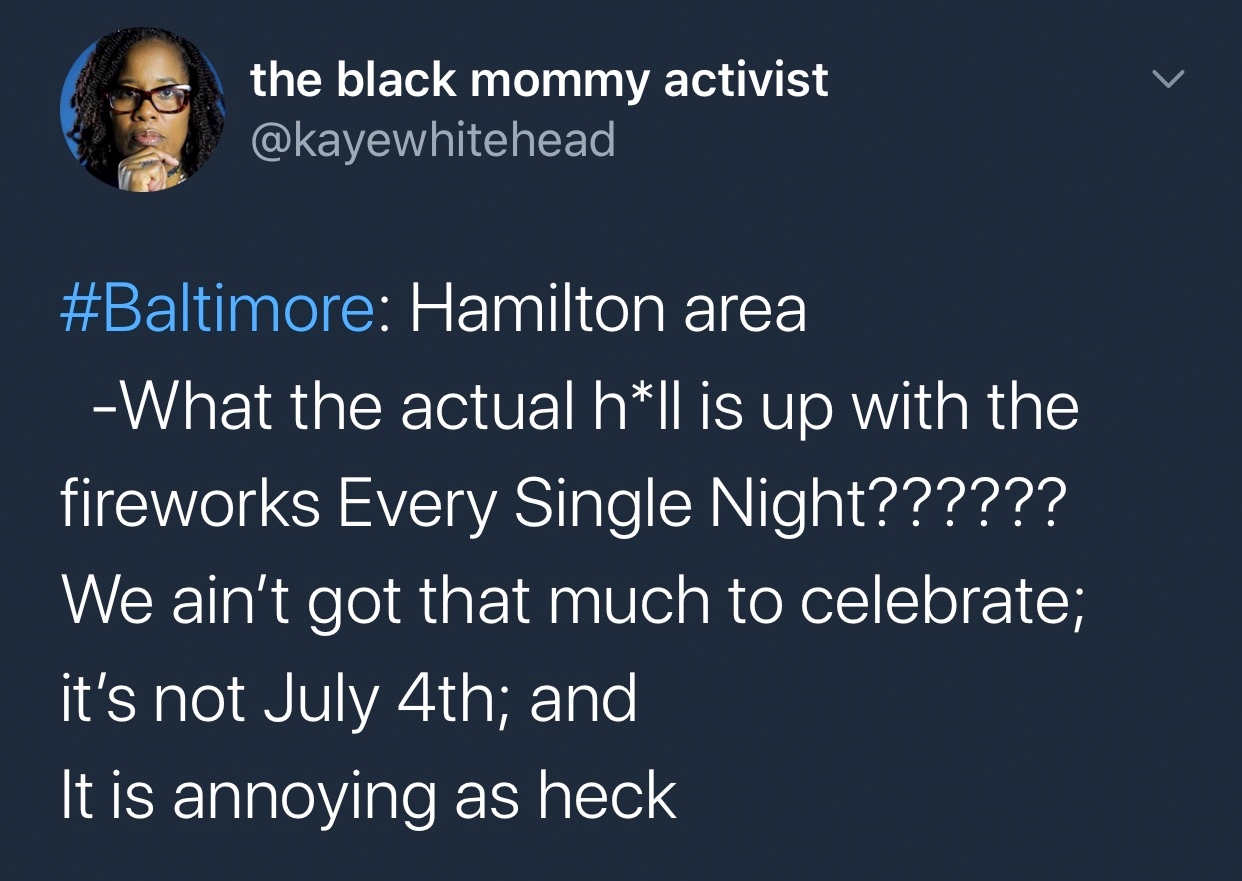 Like Lin, Whitehead says she knows that illegal summertime fireworks are a fact of life in Baltimore, but what she’s been seeing “feels very different.”

“I started noticing it right around the time of the protests,” Whitehead told The Brew. “I am not saying that they are connected – that was a moment when people were moving back into the street.”

“Posting about this nuisance enables and emboldens yr NIMBY neighbors who will most definitely call the police on Black children”  – Jenny Egan.

Others sympathize but say the complaints about the fireworks are an overreaction – one that could have disastrous consequences for city youth.

“Hey Baltimore – I know you don’t like the fireworks, but guess who is going to start responding to your complaints?” public defender Jenny Egan tweeted today.

“Your incessant posting about this nuisance enables and emboldens yr NIMBY neighbors – who will most definitely call the police on Black children,” she said. “STOP. IT.”

The question of how to explain the nightly rat-a-tat-tats and ka-booms – and what, if anything, to do about them – is being asked not just in Baltimore but in New York, Boston and other cities lately where the same phenomenon has been noted.

“There’s something louder, longer and crazier about it that’s weird,” Phoebe Streblow, a Flatbush resident, told Gothamist. “Just the sheer cost alone of these productions is suspect. They’re about the size of fireworks at a minor league ballpark.”

“Having police confront groups of people and confiscating fireworks is a tricky situation”  – Councilman John Bulllock.

Lin says that the fireworks originate from large outdoor gatherings in her neighborhood. “On Friday, roughly 300 people shut down the streets on the corner of Hollins and Carey,” she said.

She and her neighbors continue to hear the fireworks late into the night and early morning despite multiple complaints to police and Councilman John Bullock, who represents west and southwest’s 9th District.

Bullock said that he has received “numerous” calls and emails about the fireworks and noise issues, but there is little he can do.

“Unfortunately, there are not many good options to address this. As you can imagine, having police confront groups of people and confiscating fireworks is a tricky situation,” Bullock said, noting that “it is an issue affecting a number of neighborhoods.”

In southeast Baltimore, Councilman Zeke Cohen told constituents he is frustrated too, but unable to help.

“I’m going to be brutally honest with you: this is not a problem your Council Member is going to solve right now,” he wrote on the Patterson Park Neighbors Facebook page.

“It’s incredibly obnoxious, already illegal and happening all over the city,” he continued. “They woke up my kid the other night and I was furious. If you have a specific place that you know they are coming from, please let me know.”

How to explain this year’s fireworks phenomenon?

There’s lots of speculation, but few answers. (Mayor Bernard C. “Jack” Young’s office has not responded to our requests for comment.)

Some ask whether it’s related to gangs or protesters. Others quickly dismiss those ideas and say it’s more likely just people blowing off pandemic-related frustration with parties and mischief.

As for who is supplying the fancy firepower, that remains unclear.

Not Phantom Fireworks of Shrewsbury, PA., according to manager Bill Hunt.

His store, the first a Maryland driver comes to after crossing the state line, has been doing a booming business in consumer fireworks, since Covid-19 restrictions were lifted.

“They weren’t able to shop during March, April and May, so now they’re here and loading up their carts with sparklers, rockets, fire-crackers and mortars,” he said.

“They’re loading up their carts with sparklers, rockets, fire-crackers and mortars”  – Bill Hunt of Phantom Fireworks.

Many are planning backyard shows, since jurisdictions like Baltimore canceled their Fourth of July display this summer due to the coronavirus pandemic.

But if regular consumers are obtaining commercial-grade fireworks, it’s not from stores like his, Hunt said. “We would never sell them. Plus, we’re very heavily regulated.”

Meanwhile state officials say a poster circulating on social media purporting to be a directive about the proper way to handle sparklers, as well as limiting time celebrating outdoors, “is simply false.”

“We would not direct citizens on a specific time to be outside, Hogan spokesman Mike Ricci tweeted today, recommending citizens follow “the latest CDC guidelines on social distancing.”

As for Baltimore, a spokeswoman said today that BPD “is aware of recurrent firework related complaints over the past few weeks.”

“BPD officers are responding to firework related calls for service and are not only looking for the bad actors committing these offenses, but are also examining the location and searching for the illegal pyrotechnics,” Det. Nicole Monroe said in an emailed statement.

Monroe said fireworks are not only illegal in Baltimore, “but they are extremely dangerous and can cause loss of vision, severe burns, other serious injuries as well as fires.”

“Members of the community are encouraged to report locations where fireworks are being stored, ignited or sold,” she added.