Outside a West Baltimore church, 10 people stood in line for free coronavirus testing, offered to fill what church leaders said was a long overdue need.

“We have an underserved, distressed neighborhood that does not have access to Covid testing,” said Pastor Phyllis Felton of Madison Avenue Presbyterian Church.

As staffers from the University of Maryland Medical Center conducted the tests yesterday, Bishop Kevin Daniels explained the idea behind them.

“What sparked our interest and concern in making a [test] site was that we weren’t hearing a lot about the [virus case] numbers in this area, even though there was a lot of Covid activity,” Daniels said.

“A public action targeting Gov. [Larry] Hogan demonstrating the need for more testing and tracing services in the under-resourced and underserved neighborhoods of the 21217 and surrounding ZIP codes,” was how the clergy and community group BUILD, one of the organizers, described the event online.

At about the same time yesterday, in the 21224 ZIP code on the city’s Eastside, free virus testing was being offered at Iglesia de la Resurrección in Ellwood Park and at Sacred Heart of Jesus Church in Highlandtown.

The testing was part of a city Health Department partnership with Johns Hopkins Medicine, the University of Maryland and BUILD.

There had been complaints that Covid-19 testing in the hard-hit Latinx community was failing to meet the demands, resulting in long waits for Sacred Heart’s weekly free testing, including one instance where a man collapsed while waiting in the line there.

“There are ZIP codes in this city with positivity rates above 20%,” Health Commissioner Letitia Dzirasa said yesterday. “The data remind us that this pandemic is affecting some communities more than others.” 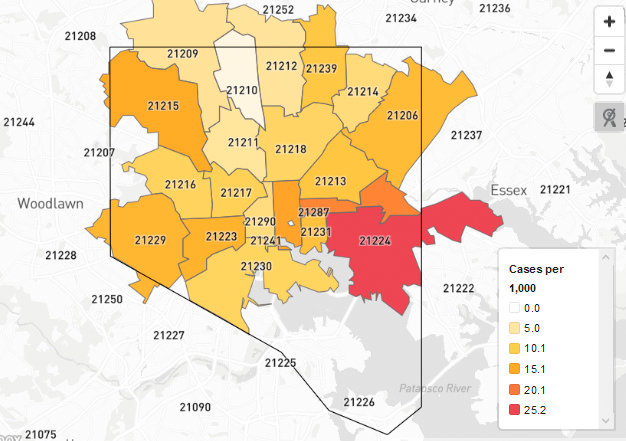 Infection rates (cases per 1,000) by ZIP code, as of yesterday, underscore the high rate in southeast Baltimore. (coronavirus.baltimorecity.gov)

While businesses have been pressing city and state leaders to relax restrictions, community leaders in East and West Baltimore have been reminding them of the virus’ disparate racial and geographic impact – falling hardest on them.

Dzirasa, speaking at the daily Covid-19 briefing where the partnership was announced, signaled that she heard them.

Meanwhile, city data show a 25.2% positivity rate in the 21224 ZIP code in southeast Baltimore that extends into Baltimore County and includes Canton, Highlandtown and Dundalk.

This area includes residential neighborhoods that have attracted young White residents and is the heart of the city’s Latinx community.

A recent Johns Hopkins study found that, of 38,000 people tested in the Baltimore/Washington region, 42.6% of Latinx patients were positive, compared to 8.8% of white patients and 17.6% of Black patients. 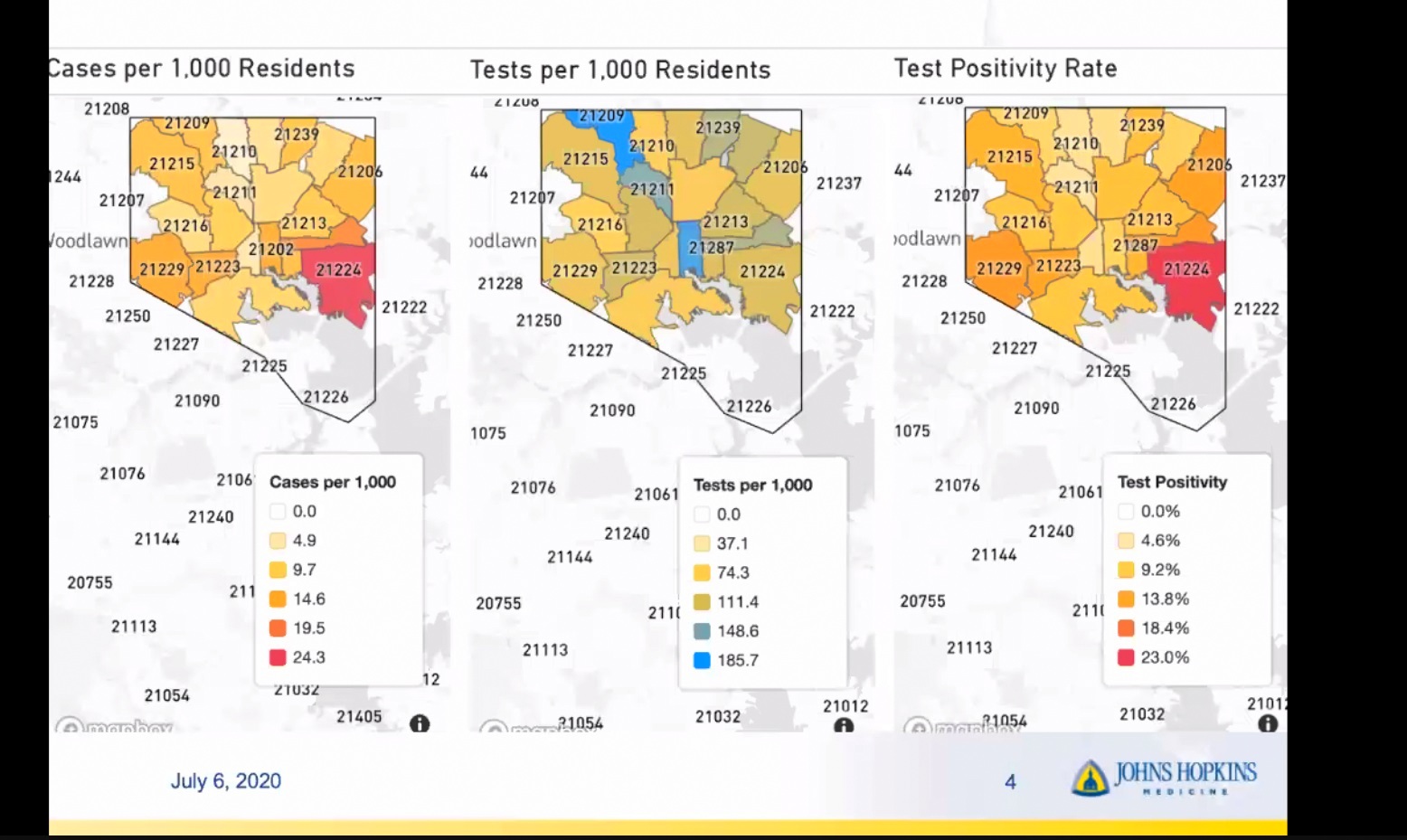 Starting next week at locations to be announced, Dzirasa said, mobile testing sites will be opened in the hardest hit parts of the city, along with the Iglesia de la Resurrección site at 2900 East Fayette Street.

The program will focus on areas with high positivity rates and help provide testing to residents without access to a car.

The Pimlico Racecourse site will now allow residents to schedule testing online without a referral.

The Pimilco Racecourse site that has been operating in conjunction with the Maryland Department of Health will now allow residents to schedule testing online without a referral.

Residents can also get testing without an appointment there as long as supplies last. The site operates on Tuesdays and Thursdays, weather permitting, but residents should check the Health Department’s website to confirm schedule and hours.

At the end of a day where mobile testing was offered at several West Baltimore locations, BUILD said 111 people had been tested, meeting the groups’ goal.

“This shows that there is incredible need, especially in a community like North Avenue, in 21217, that has a lot of transient people and people that are homeless,” organizer Rachel Brooks said.

David Jones, 23, waiting in line at the Madison Avenue Presbyterian Church, said this was going to be his third time getting tested. As a bartender, he said, he felt getting multiple tests was wise.

“When someone’s sexually active, it’s not redundant to get tested for STDs twice, so I figure the more testing the better,” he said.

Jones was waiting with his grandmother, Carmen Phillips, who lives across the street from the church.

Given the greater risks associated with Covid-19 for older people, she said she decided to get testing as soon as she saw the flyers for it. “I’m 69, and nobody’s really sure about this virus thing,” she said, “so it’s better be safe than sorry.”