Asked about a T-shirt with a racist anti-China message that the Baltimore Blast soccer team offered for sale, a company official today attributed the offense not to an underling but to the team’s owner, Edwin F. Hale, Sr.

“It was done in March by the owner as a tongue-in-cheek thing he created,” said Gianni Tumminello, vice president of soccer operations and general manager.

Tumminello said Hale added the shirt to the merchandise available for purchase on the team’s website when the coronavirus pandemic struck in the spring.

“It was forgotten about – out of sight, out of mind – after everything shut down,” Tumminello told The Brew. “It was done as a joke.”

The image on the shirt – a Baltimore Blast team logo and American flag on the front and a crossed-out image of the map of China on the back – has now been taken off the website.

Informed that the shirt, pitched as the “Blast Strong China Shirt,” has been condemned on social media as racist, Tumminello responded, “Who’s saying that?”

“Well, it’s a free country,” he observed. “They can say anything they want.”

Does he regard the shirt as racist?

A screenshot of the shirt was tweeted last night by @Skipjack0079 and, after he verified it on the team website, by Baltimore Fishbowl editor Brandon Weigel: 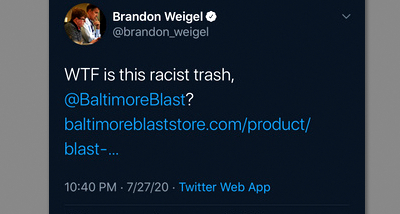 Baltimore Twitter responded with quick condemnation, calling it “disgusting,” with one person wondering if the offensive image was the result of a hack.

“I am deeply disturbed the Blast is selling racist, jingoistic anti-China shirts,” activist Owen Silverman Andrews tweeted, providing text of an email he said he sent to the team.

The ACLU of Maryland released a statement saying, “It is dangerous, reckless and racist to stigmatize Chinese people as the whole world struggles to save lives and contain Covid-19 during this pandemic.”

“We have seen terrible incidents of violence and harassment against Asian Americans in Maryland and across the country,” executive director Dana Vickers Shelley wrote. “We must speak up against it.” 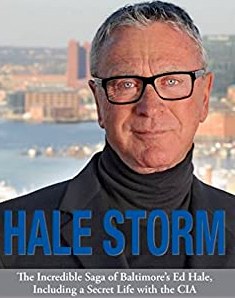 Tumminello agreed to ask Hale to contact The Brew to respond to questions about the T-shirt, but Hale has yet to do so.

Asked if the developer and former CEO of First Mariner Bancorp had designed the shirt himself or had someone else do it, Tumminello said, “I have no idea.”

In March, as cases of the novel coronavirus were on the rise, the rhetoric around it took a disturbing turn.

After President Donald Trump referred to Covid-19 as the “Chinese virus,” many Chinese-Americans and other Asian-American people reported being spit on, yelled at and otherwise attacked.

“What does he have to say to Asian-Americans who are deeply offended and worry his use will lead to further attacks of discrimination?” she pressed.