The Schenuit Rubber Tire Factory occupies one of the most historically significant sites in the Jones Falls Valley, the location of one of Baltimore’s first textile mills, the Woodberry Factory.

But the three-story building at 1750-60 Union Avenue may soon disappear, and there’s nothing Baltimore’s preservation commission can do about it – even though the area surrounding it officially became a local historic district this week.

Such a designation means that any changes proposed for buildings within the district’s boundaries, up to and including demolition, must be approved by the Commission for Historical and Architectural Preservation before the city will issue a building permit.

It also means that CHAP must review and approve any plans for new buildings in a historic district to make sure they fit in with their surroundings.

Opening up a Loophole

But the Schenuit building, its tall brick smokestack a familiar sight to drivers on the Jones Falls Expressway, was exempted from CHAP’s review by a last-minute amendment to the legislation that created the district.

The amendment was introduced after a group that includes executives from Klein Enterprises, a regional strip-mall developer, asked to be excluded from CHAP oversight.

The reason? The buyers want to build a self-storage facility in its place. 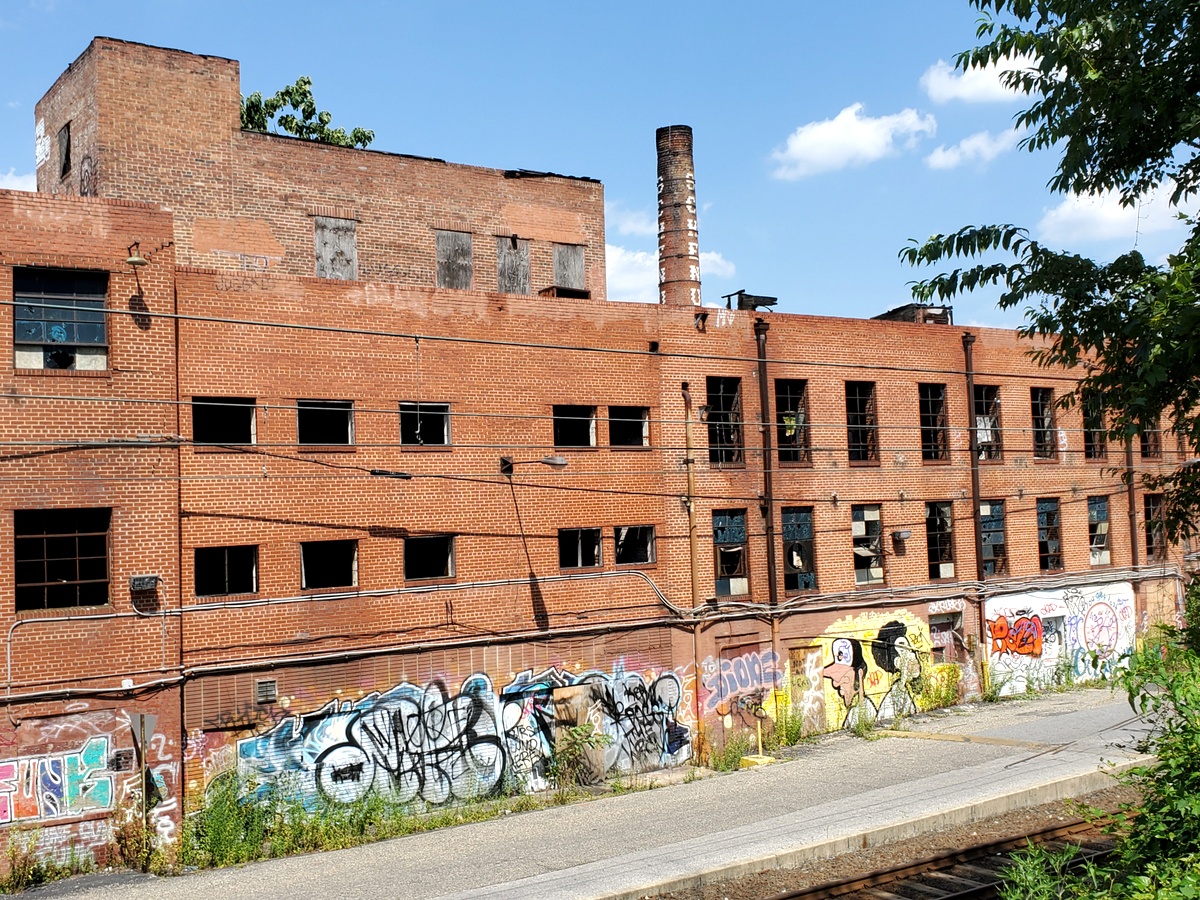 Once a maker of wheelbarrows and patio furniture, the now-vacant factory fronts the Light-Rail line north of Union Avenue. (Ed Gunts)

An attorney representing the group, Joseph R. Woolman, argued at a recent Planning Commission meeting that Woodberry wasn’t a local historic district when the group negotiated to buy the property several years ago.

The lawyer said it would therefore be unfair to make them go before CHAP now and possibly be told they cannot tear the building down after the money they’ve invested in planning.

“I have never seen a self-storage facility that was beneficial to the area around it”  – Planning Commissioner Marcia Collins.

Woolman said the building has been so damaged by multiple fires that it was unsafe and can’t be preserved.

He further expressed concern that CHAP would have authority to review the design of the self-storage facility, noting that a staff member had warned that he would raise his voice if he had concerns about its design.

“The fact that he is passionate and CHAP is passionate about the design review of structures gives us a lot of trepidation in terms of the ability to move forward with the self-storage project,” Woolman said.

The proposed use for the property was criticized by Planning Commissioner Marcia Collins.

Without specifically mentioning the Schenuit property, the amendment stated that “any building that has received Site Plan Review Committee approval on or before October 10, 2018 is not subject to CHAP approval” even if construction hadn’t begun on the project in question.

Plans for the Schenuit property were approved by a Site Plan Review Committee in time to meet the October 2018 deadline, according to testimony presented to the planning commission.

Woolman has made four contributions to Pinkett’s campaign committee, totaling $1,200, state finance records show. The most recent donations were made in January 2020.

Asked if the $1,200 in contributions influenced him, Pinkett texted back, “No, it didn’t.”

Did the $1,200 in contributions influence the councilman to submit the amendment, Pinkett was asked. “No, it didn’t,” he shot back in a text.

Having failed in a bid to become the Democratic Party nominee for the City Council presidency, Pinkett is now serving out his term as the 7th District’s lame duck councilman.

What is frustrating to preservationists is that before the bill was amended, CHAP would have had a say about what is constructed on the Schenuit site, even if it couldn’t prevent demolition.

But because the amended bill singles out property that meet certain criteria as being not subject to CHAP approval, the board is legally blocked from reviewing future plans for this key part of the historic district.

“It’s a shame that such a prominent historic building is planned to be torn down. I’m disappointed that the City Council created an amendment to the Woodberry Historic District that allows the developer to bypass CHAP and replace the factory with a strip-mall-style self-storage facility.”

Dennies said that the Woodberry Community Association conducted a letter-writing campaign to encourage the City Council to pass the bill with no amendments. During the Council hearing, a representative from Baltimore Heritage also objected to the change in the bill’s language.

But except for 3rd District Councilman Ryan Dorsey, the amendment was approved by the Council.

The Schenuit building is not the only structure in Woodberry that’s expected to disappear.

On July 15, it issued demolition permits for duplex residences at 2005 and 2007 Druid Park Drive. The dwellings are vacant and owned by VS Clipper Mill LLC, controlled by developer Larry Jennings.

Also targeted for demolition is an industrial building at 3535 Clipper Road, the former home of the Charles E. Bristor Company, recently acquired for $326,000 by Katherine Jennings (Larry Jennings’ former wife).

The latter building is next to property where Katherine Jennings flattened two 1840s stone houses last year, triggering the effort to make Woodberry a historic district. 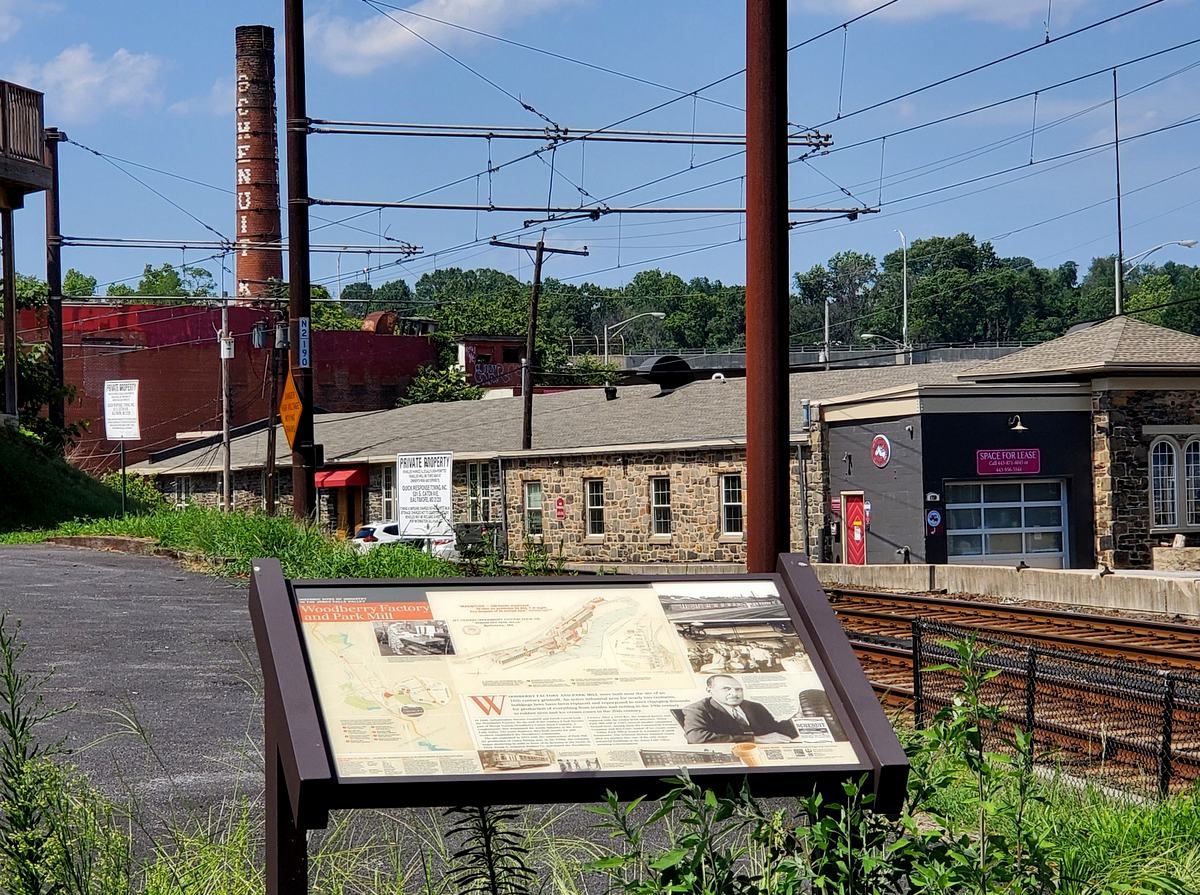 A historic marker on Union Avenue commemorates the rich history of the Woodberry Factory and the Schenuit building that replaced it. (Ed Gunts)

The Schenuit building was constructed on the site of the Woodberry Factory, a textile mill opened in 1843 by Horatio Gambrill and David Carroll.

It became part of the Mount Vernon Woodberry Cotton Duck Company, a conglomerate that made cotton duck for sails on ships, one of the signature industries of 19th century Baltimore.

The mill was sold in 1924 to Frank G. Schenuit Rubber Co., which manufactured tires for cars and trucks.

When the mill was destroyed by a fire in 1929, Schenuit put up the current building, framed by that towering stack, which has been used to make everything from aircraft tires during World War II to wheelbarrows, exercise equipment and patio furniture.