The revelation that Baltimore’s retired deputy comptroller shredded documents in the midst of a Labor Department investigation has evoked a reaction all too common among this town’s political class:

Following disclosures by Fox45 News and The Brew that the former second-in-command to Comptroller Joan M. Pratt was somehow able to enter City Hall last week and destroy documents, there has been no comment by Mayor Bernard C. “Jack” Young.

There was no response from his office to our multiple queries seeking his take on the bizarre episode or how it impacts public trust in government.

“I was notified about the incident after it occurred and after the person had been removed from City Hall. There is an ongoing investigation, and I remain committed to building a more transparent and accountable city government.”

So far, no member of the City Council has posted a comment on social media. Most significantly that includes Councilman Bill Henry, the Democratic nominee for comptroller, who has not responded to our questions about the shredding.

Into this vacuum have stepped other observers, who marvel at the subdued official reaction to the brazen act.

“I just don’t get it,” said Thiru Vignarajah, a former federal prosecutor and unsuccessful candidate for mayor. “Shredding documents without approval raises questions about obstruction of justice and demands answers to the public.”

“How much more dirt gets daylighted until arrests are made? This is absurd,” artist and activist Graham Coreil-Allen tweeted.

• How did retiree Bernice H. “Harriette” Taylor get into City Hall, which currently is in Covid-19 lockdown?

• Who authorized her long night of shredding in the comptroller’s office, followed by her bold return the next day (only to be belatedly stopped by a directive from the acting city solicitor)?

• What actions may be necessary to ensure that further document destruction or removal does not take place in an office still run by Pratt, who does not have to vacate until her successor takes over in December?

These are matters that one would presume Young and Scott, winner of the Democratic mayoral primary to become Baltimore’s next mayor, would want to explore and share with the public.

After all, Taylor was not a minor figure at City Hall. For over two decades, she was the clerk of the powerful Board of Estimates.

On a weekly basis, if not more often, she rubbed shoulders with Young and Scott as she pulled down $167,000 a year, one of the highest salaries in city government. 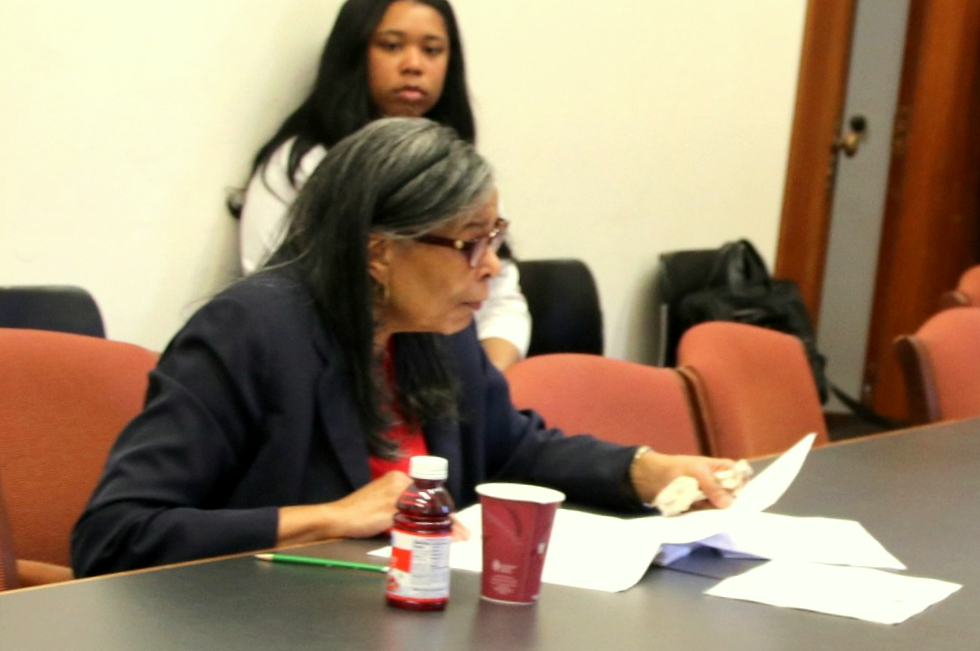 Harriette Taylor at a Board of Estimates pre-meeting shortly before she retired after 24 years at City Hall. (Fern Shen)

“City Hall politicians have turned a blind eye to this kind of corruption forever,” Vignarajah said.

“They all love ribbon cuttings, but when it comes to the hard work of making the city more transparent and holding their colleagues accountable, they have been derelict in their duties.”

With more revelations coming to light in recent days, Vignarajah wonders, “Why is no one speaking up to condemn document shredding, or at least flagging the issue for the public?”

He noted that only he and candidate Rikki Vaughn called on Pratt to resign during the mayoral primary “when the realities of what was happening in her office were revealed.”

Pratt, who claims to have no direct knowledge of the shredding that took place in her office, was also exposed (but not criminally charged) in the Pugh corruption case as a partner in a clothing consignment shop that laundered an illicit $20,000 payment from businessman J.P. Grant.

Self-described transparency hawks like Scott and Henry may be satisfied with Cumming’s reports on malfeasance by mostly middle-level bureaucrats, but that’s not enough to rebuild trust in city government, Vignarajah says.

Elected officials must hold fellow insiders accountable. And doing so requires publicly calling out those who have violated ethical standards – or worse.

He says it’s a cop-out to say there’s an investigation going on, so no one can comment on bad behavior lurking in the back rooms of City Hall. Or fail to articulate clearly the standards they expect all employees to follow in a year of heightened cynicism and despair about the state of Baltimore government.

“Until elected officials stand up for the people instead of standing by their friends, the incompetence, inefficiencies and corruption will continue,” Vignarajah said. “That’s just plain reality.”