The new owners of the Village of Cross Keys cleared a key hurdle in their efforts to expand the community when Baltimore’s Planning Commission yesterday approved a City Council bill that would allow them to carry out their plans.

The planning board voted 9 to 0 at a virtual meeting to recommend that the Council pass legislation that paves the way for 350 new apartments, a grocery store, office space and other additions to the property at 5100 Falls Road in North Baltimore.

Caves Valley Partners bought the commercial assets of Cross Keys for $27 million last month and disclosed plans to invest up to $175 million over the next five to seven years to upgrade and expand the mixed-use community, which was opened in the 1960s by developer James Rouse.

The seller was Ashkenazy Acquisition Corp. of New York. The transaction did not include the community’s separately-owned Delta by Marriott hotel or nearly 700 residences on the property.

The legislation was drafted to alter the Planned Unit Development (PUD) zoning legislation that currently controls what can be built at Cross Keys.

It replaces the existing development plan, which dates from 1972, with a new development plan that reflects what Caves Valley wants to build. With the planning board’s approval, the bill moves on to the Council for a hearing. 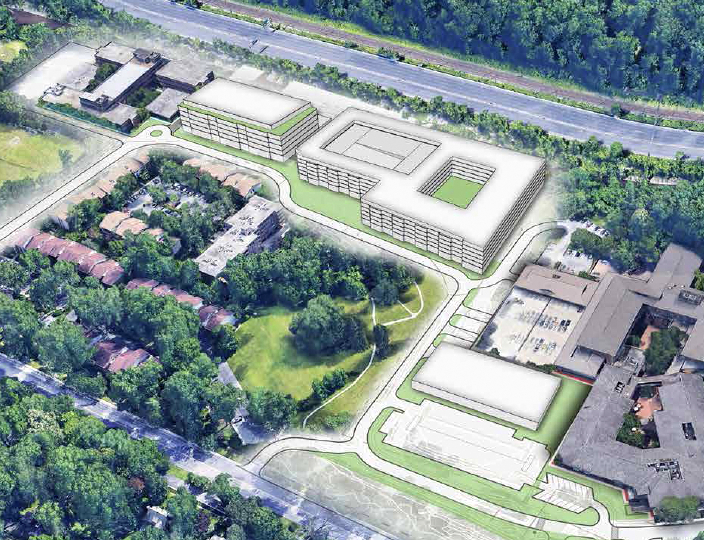 A six-story apartment building and a similarly sized office building (both shown in white) are planned for the southwest side of Cross Keys. (Design Collective of Baltimore/Caves Valley)

Arsh Mirmiran, a partner of Caves Valley, told the commission that his company essentially wants to complete the community that was envisioned by Rouse, who built Cross Keys as a prototype for the new town of Columbia in Howard County.

“The portions of the property that we’re developing were already slated to be residential and office as well as the retail. So from our perspective we’re just kind of finishing the original vision,” Mirmiran said.

After seeing the shopping area “deteriorate” under out-of-town ownership, residents and merchants are encouraged that Caves Valley will make needed improvement, according to 6th District Councilwoman Sharon Green Middleton.

She called Caves Valley’s purchase “a come-to-the-rescue of that community,” adding, “I have not had one complaint as we’ve been moving forward.” 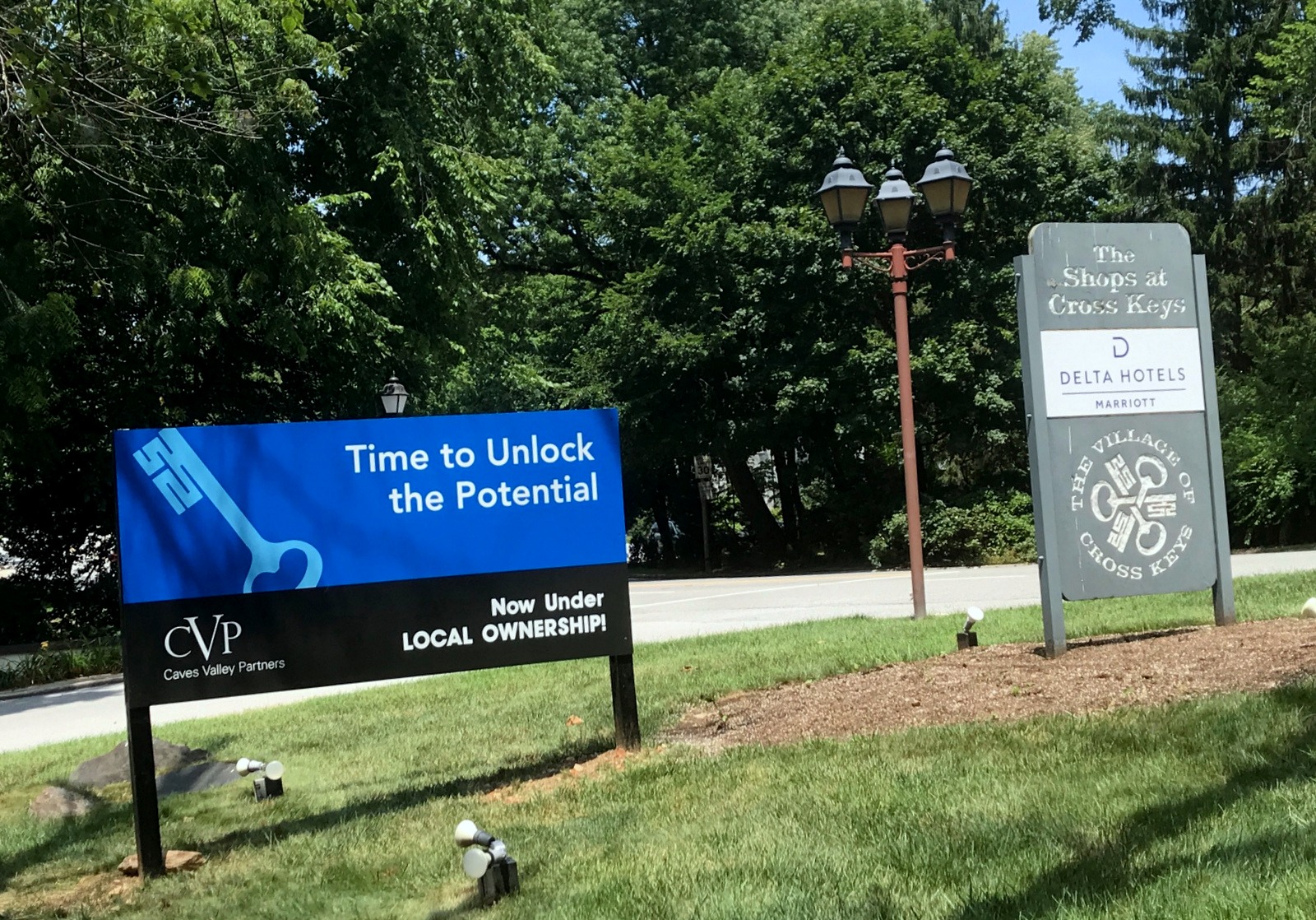 Before the Rouse Company acquired it, the land was owned by the Baltimore Country Club, which stopped using it as a golf course in the early 1960s.

Developed in phases, Cross Keys became a well-known destination for upscale shopping and dining. As Middleton noted yesterday, “If you’re from Baltimore, you remember the beginnings of Cross Keys.”

Rouse owned and managed Cross Keys until 2004, when both the company and its real estate portfolio were acquired by General Growth Properties, a national shopping center developer.

In 2012, General Growth sold its portion of Cross Keys to Ashkenazy, which at the same time collected a series of “trophy” retail properties such as Harborplace in Baltimore and the Mazza Gallerie Mall in Washington, which is going up for auction in a foreclosure sale next week.

Caves Valley purchased from Ashkenazy the retail, office and common space of Village Square I and II and the Quadrangle building.

In addition, it owns the tennis barn, the structure that contains Williams-Sonoma, a parking deck and several surface parking lots, and land near Poly and Western high schools. 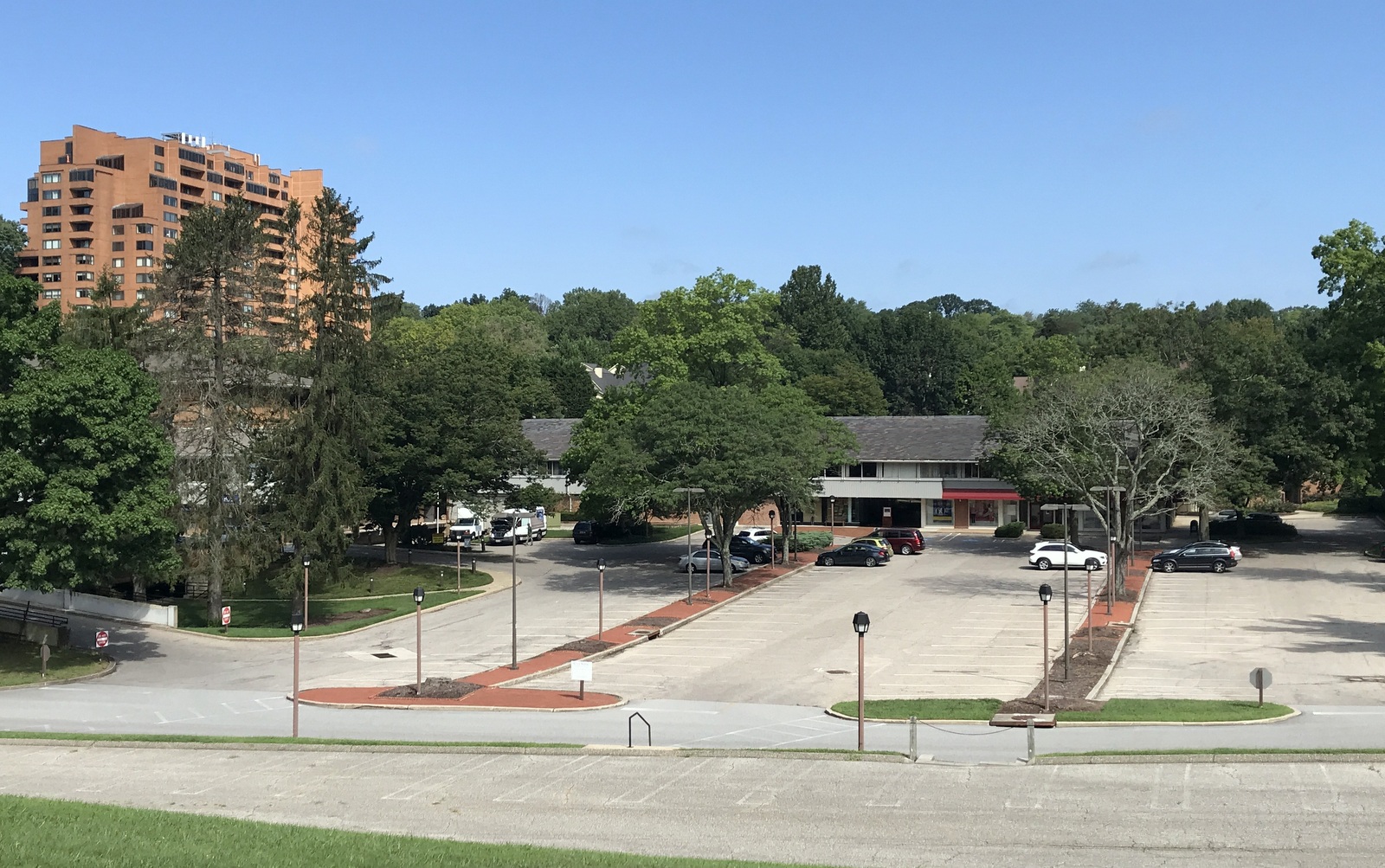 This parking area near the current Village shopping center is slated for a mid-sized grocery store. (Mark Reutter)

According to a chart presented to the planning commission, Caves Valley wants to build about 350 more apartments on the west side of the development (close to the Jones Falls Expressway).

Tentative plans calls for a six-story apartment building on the site of the tennis barn and a mostly unusued parking lot.

The developer is also eyeing additional office space and a grocery store with about 35,000 square feet of space near the Village Square.

The developer has talked about adding one or two restaurants, a gym or fitness center, a hair salon or spa, and structured parking. It also wants to upgrade the gatehouse on Falls Road.

According to Mirmiran, the first projects at Cross Keys will involve addressing deferred maintenance items left by the previous owners, such as fixing spalling concrete or rusted mechanical units. He said Caves Valley wants to complete much of the repair work by the end of this year.

In terms of new construction, he said, the first major structure is likely to be the apartment building, which is expected to cost $100 million. A new office building would follow, to be located near the Quadrangle building.