Hailed by city officials as a capstone achievement to end a “food desert” in an underserved Baltimore neighborhood, the ShopRite supermarket on Liberty Heights Avenue is in financial trouble.

Today the Board of Estimates excused $500,000 from a $2 million promissory note issued to the Howard Park store, which has suffered from lower-than-expected revenues, according to two sources.

The action means that the principal owners, Klein’s ShopRite of Maryland, will only have to pay $600,000 on the loan’s first installment due next month.

Translated, that means that Klein’s ShopRite must maintain a city workforce whose individual gross pay would average $20,000 a year over the next nine years.

According to the BOE agenda, the retailer had requested the $500,000 reduction to “help continue operations at the location.” Klein’s is now seeking “a larger refinancing” to keep the store afloat.

The original financing came from a $14.65 million New Markets Tax Credit underwritten by The Reinvestment Fund and City First Bank.

The Klein family has never paid the $2 million purchase price for the six-acre plot on which the ShopRite store sits.

Instead, they were given an eight-year deferral of the purchase price, which itself was a steep reduction from the $4 million-plus the city spent to purchase an abandoned SuperPride store and clear the site at Liberty Heights and Gwynn Oak avenues.

Colin Tarbert, president of the Baltimore Development Corp. that arranged the deal, did not return a message seeking comment on the loan reduction.

Nor did Henry Raymond, the city’s finance director, and Howard Klein, vice president and general counsel of Klein’s Family Markets.

Comptroller Joan Pratt alluded to the reduced payment (which she referred to as a “modification”), saying, “This is an example of a socially responsible investment in a historically underserved community, and that is why I am proud to be in favor of this item today.” 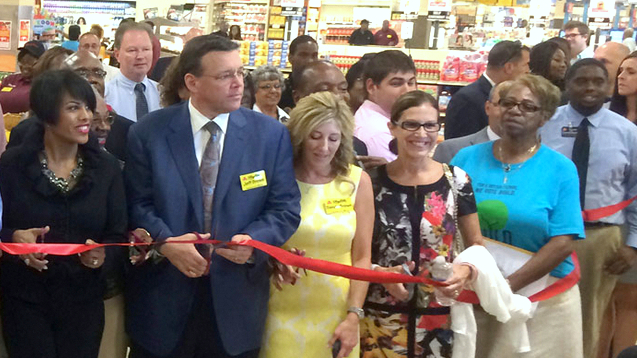 Mayor Stephanie Rawlings-Blake with the Klein family and others at the 2014 ribbon-cutting of the Howard Park ShopRite. (Klein’s Family Markets)

Ever since the SuperPride store closed in 1999, the city had tried to get a supermarket at the site.

Campaigning for mayor in 2011, Stephanie Rawlings-Blake brought local residents to their feet at New All Saints Church by declaring that the Klein family would build a state-of-the-art supermarket.

Under the city’s direction, the Kleins built the largest grocery in Baltimore, with 67,000 square feet of space, plus community meeting rooms and other amenities. (By comparison, the new Whole Foods store opened in June at Harbor East boasts 47,000 square feet.)

Also at the city’s direction, a source told The Brew, the retailer was pushed to hire Commercial Construction, the politically-connected vehicle of Kevin Johnson and silent partner J.P. Grant, to handle stormwater management and other work.

The collaboration cost both time and treasure due to allegedly botched work by Commercial. “I felt really sorry for the Kleins,” the source said.

When it opened in July 2014, the store was lauded by then-BDC president Brenda McKenzie as an “important signal that there is money to be made” in Baltimore communities. ShopRite would serve as the “anchor” to activate new commercial activity across Howard Park, she said.

But the store has never achieved its expected revenues, even after Target closed a competing food store at Mondawmin Mall in February 2018.

As the Covid-19 pandemic took shape this spring, the Kleins faced the long-deferred purchase payment, with the first installment coming due on September 30.

Today’s agenda item, prepared by the BDC, alludes to the $500,000 reduction as being warranted by “the lack of presumed state or city financial incentives for employee hiring and training.”

When it received the $2 million price deferment in 2011, the Klein family agreed to a “$500,000 commitment to pre-opening employee training,” according to BOE records.

8/27 UPDATE: The Klein family has released a May 21, 2016 letter from then-Housing Commissioner Paul Graziano saying the city will credit $500,000 to Klein’s ShopRite because the retailer received only a portion of workforce training funds added as a sweetener to the Liberty Heights land purchase.

Klein’s told the city that it got just $241,437.91 in Maryland Social Services aid for the hiring and training of employees. Those funds – used to train 49 people, 12 of whom were still employed at the store – fell short of the $1 million promised as part of the $2 million purchase of the land.

“Any shortfall [in taxpayer aid] up to $500,000 may be applied to the Purchase Money Note. . . and shall ultimately be passed on to the Tenant,” Graziano wrote.

Still unclear is why city officials cited, in yesterday’s BOE agenda, the need for “a larger refinancing” of the store to maintain its operations.
________________________
• To reach this reporter: reuttermark@yahoo.com