A City Council bill that sounds awfully dry on its face – it would eliminate parking space minimum requirements in certain situations, among other provisions – blew up recently into a heated debate that included accusations of classism, racism and more.

Parking has a way of doing that in Baltimore.

The measure, intended to make the city less car-centric, would end parking minimums in the city, including a zoning code requirement that any conversion of a single-family home into two or more apartments demonstrate that off-street parking can be provided.

Because on-site parking is generally impossible on a typical rowhouse lot, the zoning requirement has had the effect of preventing property owners from carving up houses into multiple units.

Removing this requirement, as proposed by Bill 20-0561, would have the unintended consequence of taking away an important tool to guard against an influx of absentee landlords, say some community leaders.

Arguing that homeownership is already too low in their areas, community association presidents and one resident from six central city neighborhoods have asked for special protection from this feature of the bill.

But when their letter to city officials with this proposal surfaced, it was denounced by some who saw in it another agenda:

“This proposal is racist, classist and isn’t backed by data,” K.C. Kelleher, a City Hall staffer who lives in one of the neighborhoods, charged on Twitter. “It’s not just an overreaction, it’s redlining with another name.”

Councilman Ryan Dorsey, who represents northeast Baltimore and co-sponsored the bill, echoed this view, alleging the letter marks the latest chapter in Baltimore’s history of segregation.

“It treads heavily on the most sordid past that Baltimore City has ever offered to the world,” Dorsey said at a meeting about the bill recently.

To David Nyweide, who signed the letter for the Bolton Hill Community Association, that’s a very unfair characterization.

“It’s a red herring to say this is tantamount to redlining. It’s just about making sure the housing stock is well-balanced,” Nyweide said in defense of the proposed “homeowner protection overlay district.”

“We don’t want to see any more of our big beautiful rowhomes carved into apartment buildings,” he explained. 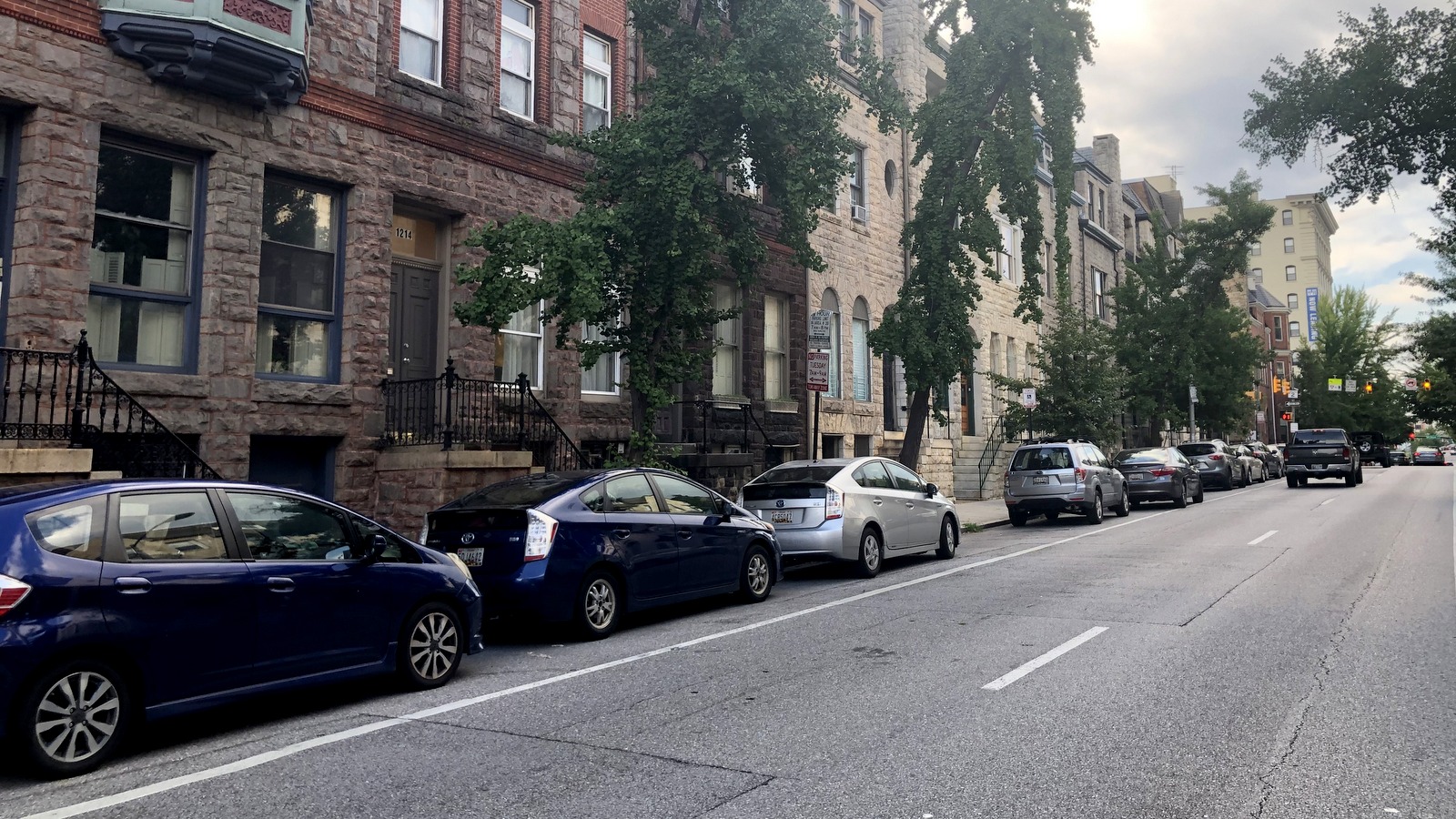 Dorsey and 13th District Councilwoman Shannon Sneed introduced the bill earlier this summer, and Dorsey defended it at a Planning Department meeting last week. It has not yet been scheduled for a hearing before the Land Use Committee, which is chaired by Councilman Ed Reisinger.

The goal of his “Fossil Fuel Infrastructures” legislation is to make people less dependent on cars, in part by giving cars less parking space, Dorsey said.

(Another provision of the bill, a prohibition on the construction of new gas stations in the city, has drawn praise from environmental advocates and criticism from Reisinger and from the retail and gas station industry. The bill also prohibits new parking in city parks.)

Dorsey noted that about half of Baltimore residents don’t have access to a car at any given time, and argued off-street parking lots don’t get used enough to justify the amount of space they occupy.

“It makes sense for us to get away from the auto-centric and parking-centric vision of community development that the city has clung to for decades,” Dorsey said at the meeting.

“I don’t think that we have a compelling interest in prohibiting housing from being built, prohibiting businesses from being able to open, unless they also build off street parking,” he continued. 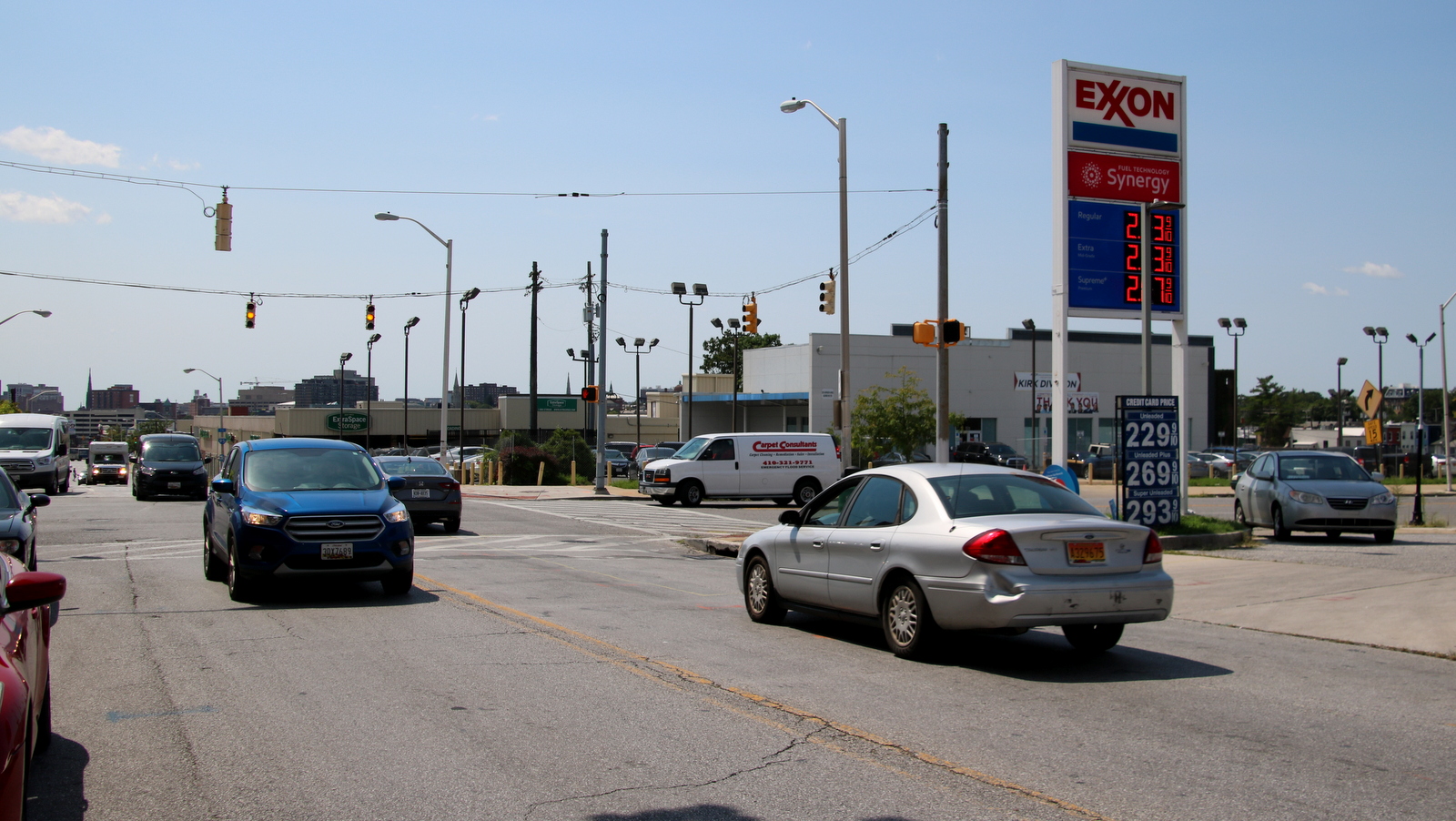 The bill would also prohibit the construction of new gas stations in the city. Traffic on Howard Street at 25th Street. (Fern Shen)

What the groups specifically proposed in the letter is to turn their neighborhoods into a special district where the conversion of houses into more than two residential units is prohibited.

If a building converted into two units remained vacant for a year or more, it would have to revert to a single-family unit.

The community representatives said their goal in seeking to be carved out of the bill is to be able limit the number of renters and “preserve homeownership opportunities.”

“For many years, our best protection against absentee landlords has been the zoning requirements for off-street parking,” states their August 3 letter.

“It would help our neighborhoods to have more homeowners. At minimum, we need to maintain our current levels of homeownership.”

These homeownership breakdowns were presented by the community associations. Proponents of Bill 20-0561 say they are inaccurate. (Baltimore Planning Department)

“Even the most stable of our neighborhoods have extremely low rates of homeownership, and the rate is probably too low in some,” they wrote.

According to bill supporters, the community associations are fudging the numbers to make the rates seem lower than they are.

Proponents point to data from the Baltimore Neighborhood Indicators Alliance showing 40.8% of homes in the midtown area, which includes Bolton Hill, were owner-occupied in 2018. Slightly more homeowners, 43.7%, lived in the Greater Charles Village/Barclay area that year.

Another reason for the controversy is some of the association leaders signed the August 3 letter without the support of their members or boards.

Representatives from the Greater Remington Improvement Association were so incensed by testimony in a public meeting implying that “center Baltimore” neighborhoods supported the letter that they wrote to city officials in order to “distance” themselves from it and to announce support for the bill.

That tension was apparent at the hearing where the two sides offered differing views on the measure’s impact.

Critics of the bill said making it cheaper and easier for a property owner to divide a rowhouse into multiple units would allow more people – and, ironically, their cars if they have them – into a neighborhood.

Bolton Hill resident Neal Friedlander, meanwhile, predicted the conversions would be the work of out-of-town landlords who would not maintain properties.

“When that happens, that discourages the quality of life for homeowners,” he said.

He said an apartment building in his neighborhood had to abandon plans for a green roof and affordable housing units because of the parking requirements.

“It’s just a complete waste of money that could have been used for things that would have made our neighborhood more attractive,” he said.

The Parking Authority of Baltimore City also faults the measure, saying the lack of parking minimums would strain an already tight supply in dense neighborhoods with high rates of car ownership.

“The PABC would caution against any action that would result in the elimination of too much parking too quickly.”

“The PABC would caution against any action that would result in the elimination of too much parking too quickly in neighborhoods that already have an imbalance of parking supply and demand,” wrote Peter Little, PABC executive director, in a letter to City Council President Brandon Scott calling for action on the bill to be deferred.

Little said residents and businesses would “need time to acclimate” to the bill’s proposed changes, and more investment is needed to improve mass transit, car sharing, biking and other alternatives to cars in the city.