Lights were strung up at the Boone Street Community Garden, a few blocks north of the Green Mount Cemetery, and chips, bottles of water, masks and campaign literature were laid out.

Muller Paz, running as a Green Party candidate against incumbent Democrat Robert Stokes in the 12th District, was set to sing and play guitar, answer questions and talk about the campaign between songs.

But shortly before the “stoop concert” was supposed to start, a man was shot, multiple times, 2½ blocks away from the garden, in the 2300 block of Homewood Avenue.

Muller Paz decided to postpone. “There’s a lot of work to do” to stop such tragedies from continuing, she said, as the daylight faded and campaign volunteers departed the area.

It was a somber scene compared to earlier in the day when Muller Paz waved to the crowd from a car caravan in Highlandtown, part of an event to mark Hispanic Heritage Month.

After canceling last night’s event, Muller Paz and a few aides remained in the neighborhood.

They offered “a space for healing and reflection,” in the candidate’s words, and brought in two activist-mediators from Organizing Black to help anyone affected.

“It was a better way to respect what happened,” she told The Brew.

A few community members stopped by. After night fell, a meditation circle near the site of the shooting was mostly comprised of her campaign volunteers.

Police said they responded to a 4:35 p.m. call about the shooting and found an unidentified man with gunshot wounds. He was transported to a local hospital and described last night as being in critical condition.

Police also reported a possibly related incident, a 27-year-old man who arrived shortly afterwards at a hospital with a gunshot wound.

One bystander, who showed up in the aftermath of last night’s shooting, offered comments on its origins.

“I’m pretty sure of why. Drugs,” said Martez Moyd, who is homeless and described themselves as being familiar with drugs, violence and gangs in East Baltimore.

“It’s a territory thing going on over here between a couple high-profile dudes,” Moyd said.

Members of a gang based on Harford Road had been moving west into the territory of another gang based on Greenmount. They said this was the third nearby shooting in three days, but they didn’t know who was involved with this one.

Lydell Hills, a mediator and “artivist” who had attempted to help, said police interfered with his efforts to speak to community members. He said mediation by credible community members is much more effective than policing.

Another mediator echoed Hills. “When you come back tomorrow, the cops ain’t gonna be around looking for people.”

As a mediator, he continued, “You have to be trusted, and you have to earn that trust for real.” 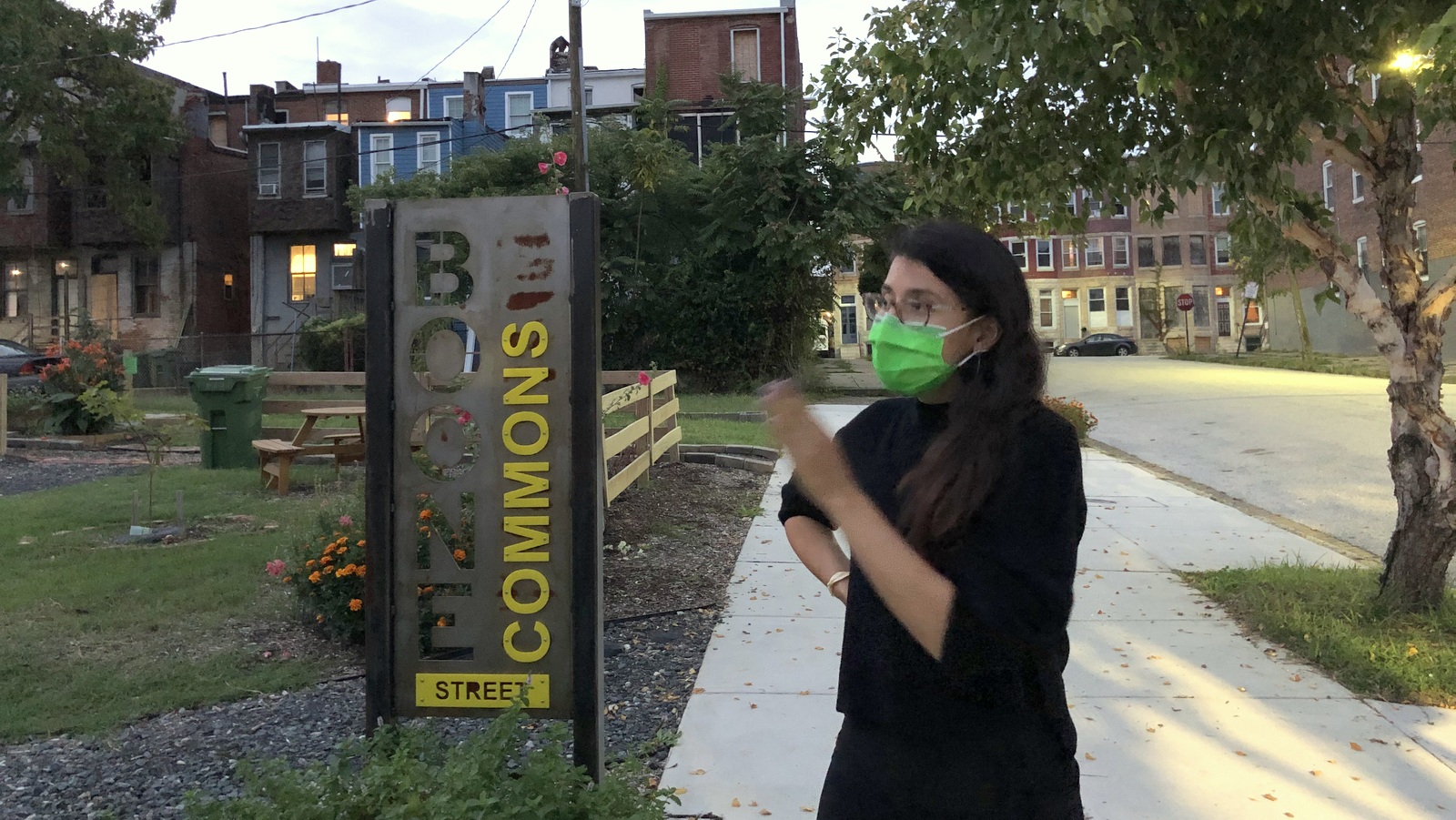 She has gained popularity on social media and in the neighborhoods on the west side of the 12th District, including Charles Village and Remington.

Since her campaign began this summer, Muller Paz says that more than 300 people volunteered and she has raised almost $75,000 by the end of last week.

Incumbent Stokes reported accepting no contributions over the summer – and hasn’t been campaigning actively.

Muller Paz is working to broaden her appeal before the November 3 general election. Last night’s event was one of many the 32-year-old teacher has been holding to increase name recognition across the district, particularly in Black neighborhoods, such as Oliver and Oldtown, regarded as Stokes strongholds.

“She has the support of a lot of people who wasn’t going to vote this time around,”says Oliver activist Gary Crum.

“She has the support of a lot of people who wasn’t going to vote this time around,” Crum told The Brew last week.

In the run-up to her general election bid, Muller Paz has been most widely known for her activism on the digital divide’s affect on poor city students, especially amid the coronavirus pandemic.

The interrupted event yesterday was an opportunity to address another issue that has plagued her district and the city – crime and violence.

Her platform positions on public safety have stressed defunding police and re-channeling resources to other needs and using violence interrupters like the Safe Streets program.

But here was an opportunity to engage on the issue in a more immediate way. She was asked how the city can reduce to the violence and bloodshed.

Baltimore has to move beyond “surface-level, band-aid approaches,” she said.

In a statement released later in the evening, she put it this way:

“Community-centered public safety is a priority as is meaningful investment in our Black and Brown communities. As we witnessed tonight, building relationships with our neighbors is critical to work through tough moments like these.”
________________________
• To reach this reporter: ianpground@gmail.com