October 1 marks the start of another 10% hike to your water bill – the 20th such increase in the last 21 years.

The increase was set to go into effect July 1, but was postponed by Mayor Bernard C. “Jack” Young because of the Covid-19 pandemic.

In announcing the delay last April, Young said, “At this time of uncertainty and extraordinary need, I will champion the residents of Baltimore by calling for a delay to this rate increase.”

Since then, a coalition of labor, religious and advocacy groups has urged Young to continue to use his emergency powers to delay implementation of the increase until the health and financial crisis is over.

Rianna Eckel, senior organizer at the Food & Water Watch, said the mayor never responded to their requests, the latest made in a September 15 letter to Young signed by 35 organizations.

“Baltimoreans are still financially suffering from the pandemic. Allowing this increase to take effect now adds a heavy burden to tens of thousands of families, including on the elderly and children,” Eckel said yesterday.

Today’s water rate increase will cover over 200,000 residential customers, increasing the water and sewer bill of an average household by roughly $120 a year. 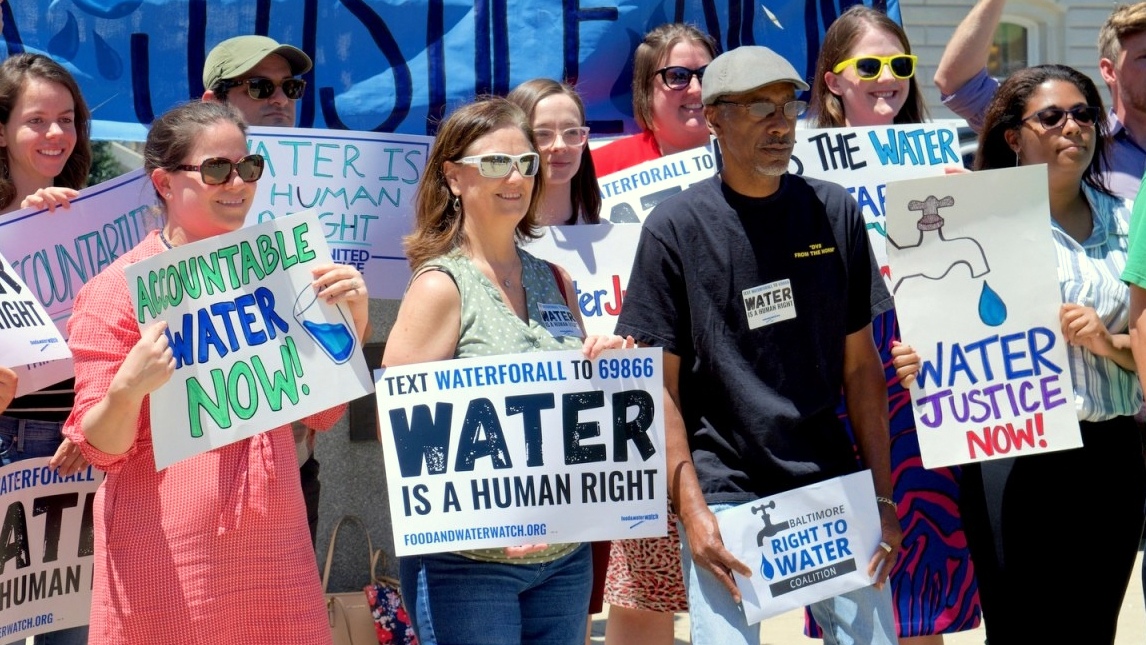 Activists rally in front of City Hall for a water affordability bill. The bill was passed last year, but its implementation has been delayed by the Young administration. (Lizzie Kane)

The new rate is the second installment of a three-year, 30% increase approved by the Board of Estimates in early 2019 when Catherine Pugh was mayor.

Then City Council president, Young voted against the increase, citing the harm it would cause to low-income families. But he was overruled by the three-vote majority controlled by Pugh.

As mayor, Young now holds the three votes on the BOE – his own and those of the city solicitor and the public works director (whose department recommends water and sewer rates to the board).

The rate increase comes despite the failure of the Young administration to complete a promised audit of unpaid water bills by large commercial property owners.

Young announced the audit last October after saying he was “outraged to learn” that the exclusive Ritz Carlton complex had not gotten a water bill from the city in over a decade.

After a new water meter was installed at the waterfront compound, the condominium association stopped receiving bills and owed the city $2.3 million, according to the mayor.

In February, The Brew reported that some of the city’s most prominent addresses – including the Johns Hopkins Medical Campus and Under Armour executive Kevin Plank’s whiskey distillery and Fells Point hotel – collectively owed millions in unpaid water bills.

Meanwhile, the audit promised to be publicly released last spring was never issued.

The person in charge of overseeing the audit, deputy chief of staff Sheryl B. Goldstein, left the mayor’s office in May.

And in June, the Department of Public Works said it could not implement the 2019 Water Accountability and Equity Act on schedule.

The legislation would discount water billing rates based on household income and give customers greater leeway to challenge water billing errors.

Intended to go into effect in July, the new effective date for the law is July 2021, or seven months after lame-duck Young leaves office.