A stampede of goats rushed out of their trailer and into the heart of North Baltimore today, tasked with taking out the pesky vines and underbrush in Wyman Park across the street from the Baltimore Museum of Art.

This morning, excitement was high online about the coming of the four-legged weed-whackers to Baltimore, where bad news has been plentiful and adorable goat stories have had a knack for counteracting it.

“Word on the street is they are arriving at 3,” one Tweeted. “Just herd (har har)” another replied. One asked a friend, “Wanna meet up for coffee/goat watching?”

But Justin Pearson-Smith, a 28-year-old homeless musician who lives in a tent in the woods several feet from the fenced-in goats, had no idea he was about to get some new neighbors.

“As the resident homeless artist, I can’t wait to have concerts and play music for the goats. I couldn’t be more stoked,” said Pearson-Smith. “I’m going to take mad selfies with all the goats.” 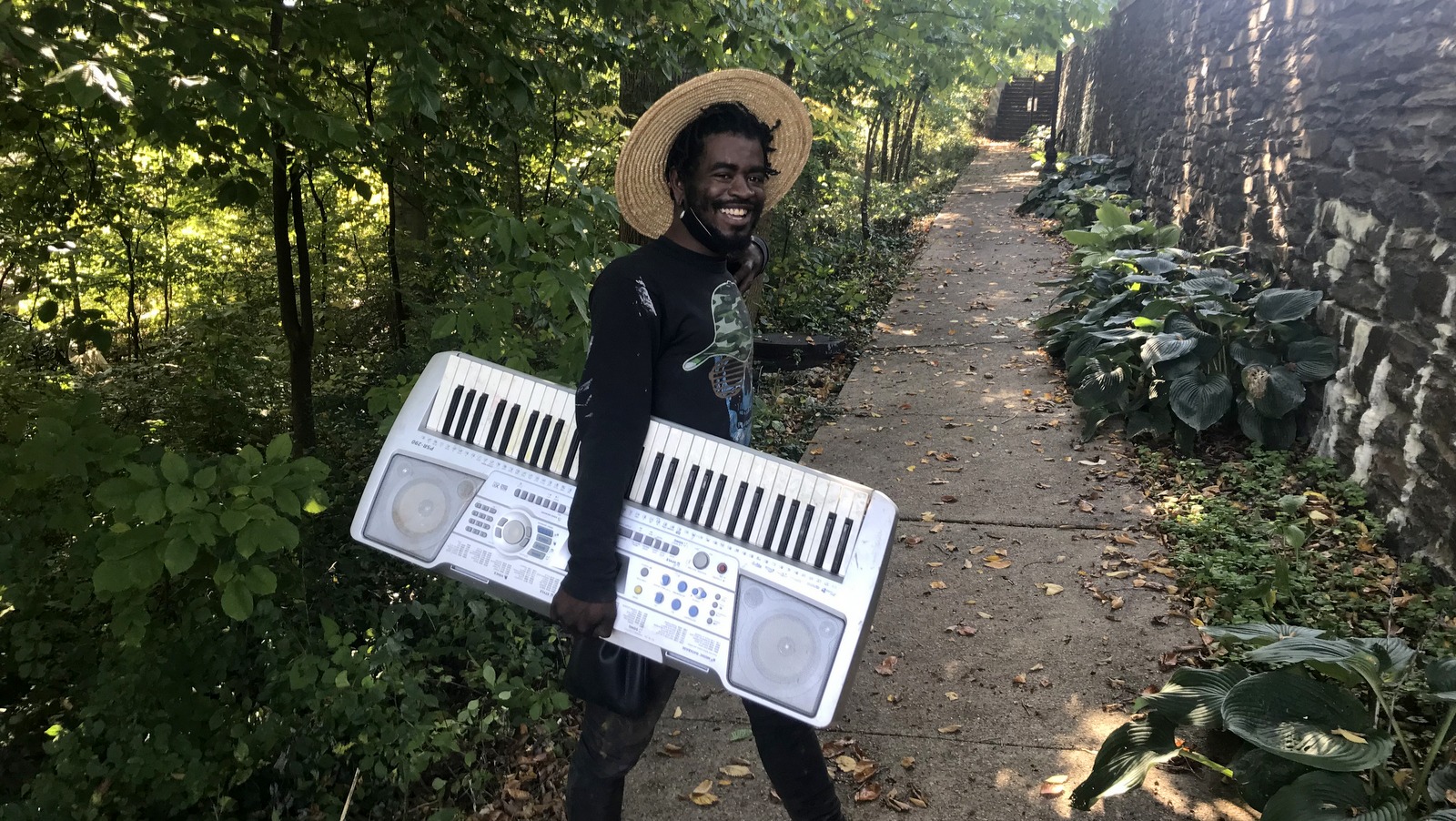 Justin Pearson-Smith, who lives in a tent in Wyman Park Dell next to the goat enclosure, walks to 7-11 on Thursday while carrying his keyboard. (Louis Krauss)

“Perfect use of goats”

The goats were requested by the Friends of Wyman Park Dell, a community group hoping to create visibility on the hill by taking out the dense vegetation in an environmentally friendly way.

President Cailin McGough said the group has wanted to clear the undergrowth on that hill for a while, in order to provide a better view of the green open space below to people walking along Art Museum Drive.

“It seemed like a perfect use of goats,” McGough said. “Right now a lot of people walk by without knowing the park is down there. We talked with the city about getting it mowed, but it was too steep of a slope.” 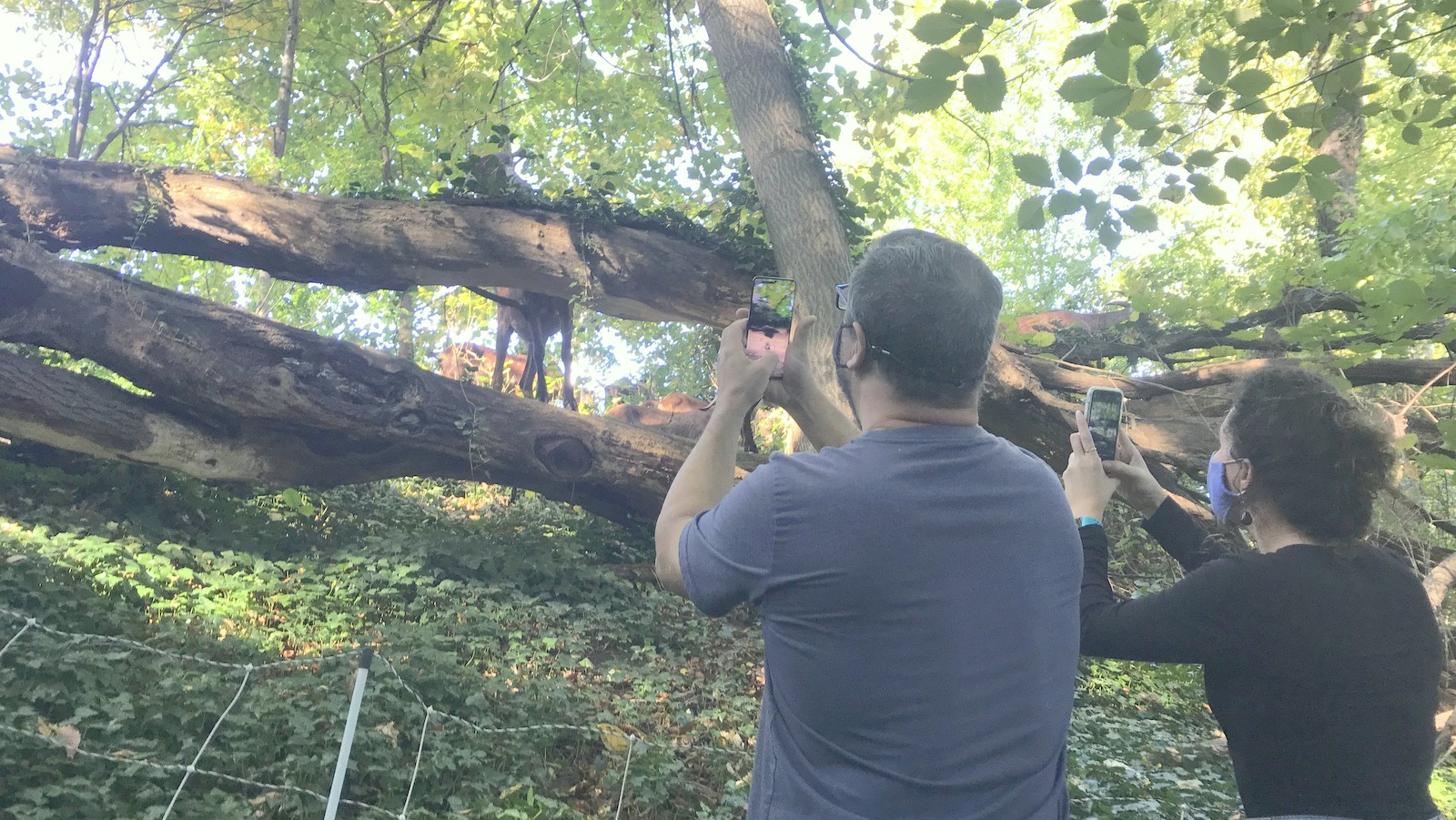 Onlookers thronged Wyman Park for a chance to see the goats. (Louis Krauss)

To tackle the issue, they reached out to Eco-Goats, an Eastern Shore-based company that specializes in sending goats where they’re needed to chomp away at unwanted vegetation.

McGough and her group started a GoFundMe page, and raised $3,500 to pay for the service, exceeding their $3,000 goal.

“I couldn’t love this more”

To set up the site, Eco-Goats supervising forester Brian Knox and his coworkers installed an electric fence that keeps the goats confined to the section of hillside across the street from the museum.

As spectators watched this afternoon, they released the 20 goats, mostly Nubians and a few Pygmy goats. More than 50 people showed up on a warm fall afternoon to see the goats and take pictures of them.

“I couldn’t love this any more,” declared Lexie Mountain.

“We kind of were hoping the goats had nametags so we could tell them ‘good job’ after they get finished eating through the plants,” said her friend Rachel Swayne.

Others brought their families to the park, including Laura Stella who came with her three daughters.

“This is just such a fun spectacle,” Stella said. “Our girls had a memorable experience where a goat nibbled one of their dresses before flopping on them, so they’re really enjoying this.” 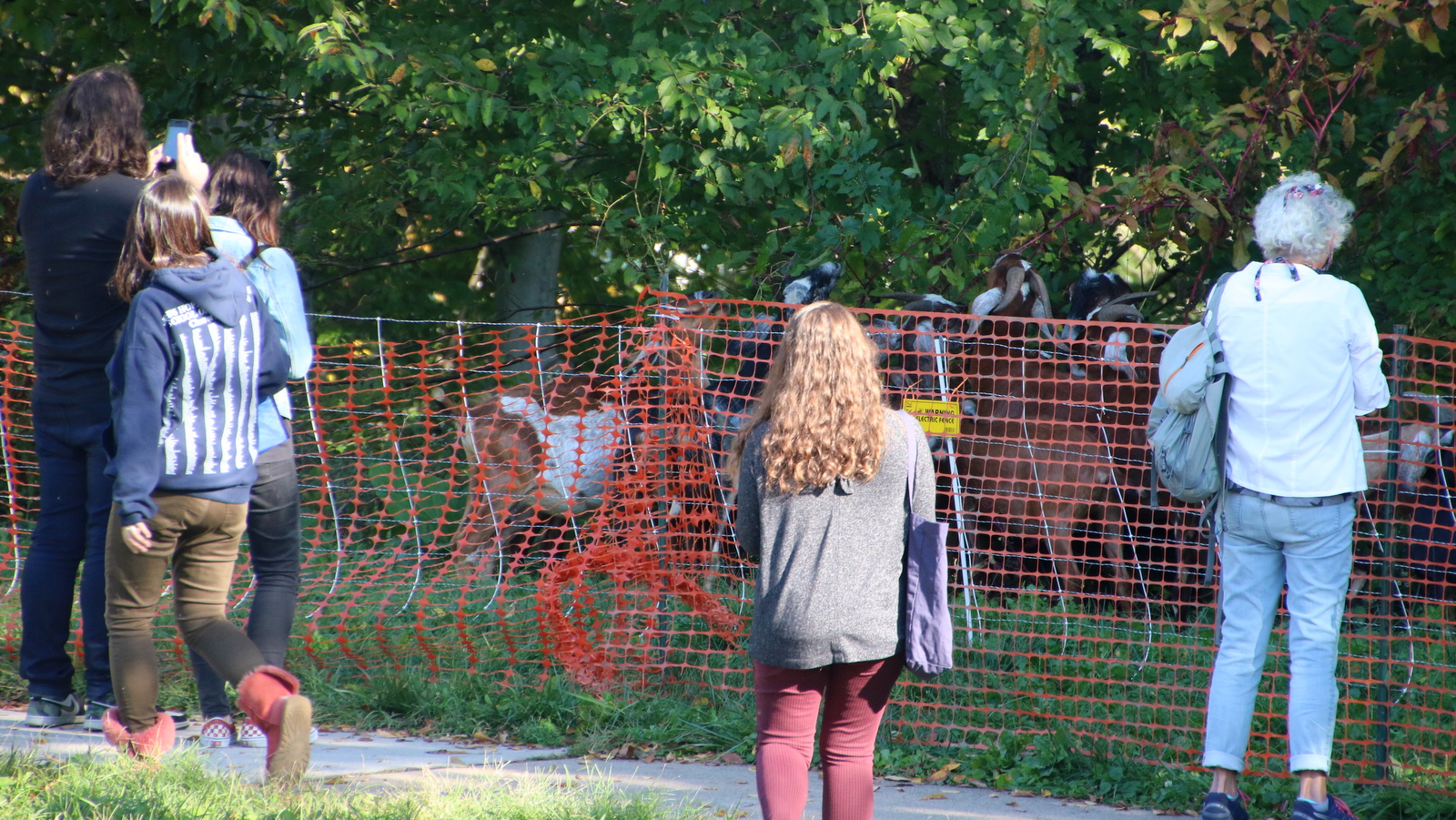 Dozens of people and families visited to watch the goats on Thursday. (Louis Krauss)

Knox estimated it would take the goats about five days to eat through everything in the area, and that some small tree branches would be the only things to remain.

“They’ll take down everything to the stems, and because they like Mulberry trees they’ll also strip the bark on them,” Knox said. “Goats are great, but they aren’t right for every project.” 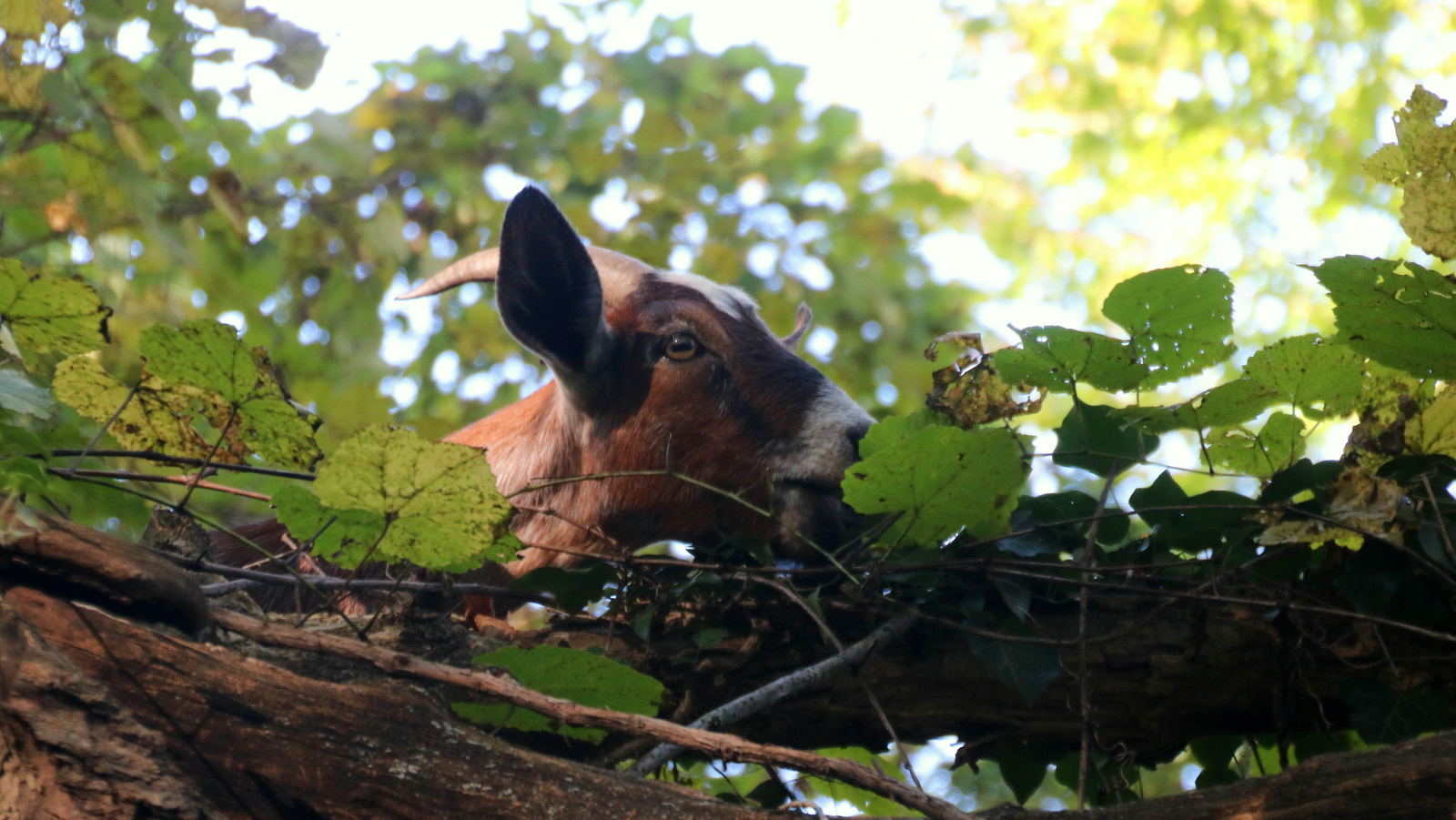 Several goats were adventurous and climbed atop fallen trees to eat the vines. (Louis Krauss)

The goats are meant to stay in the enclosure until they are finished eating through the plants, and are not moved overnight.

Knox said he heard about the incident in South Baltimore where “Ed” the baby goat was stolen – and all of Baltimore breathed a sigh of relief after his safe return.

Although Knox has had to hire security guards in the past, he said he’s confident that with Johns Hopkins University and the museum’s security nearby it wouldn’t be an issue.

Besides, he said, the goats may be mellow, but they’re no pushovers.

“These goats are pretty wary,” he said. “I don’t know if they would let anyone other than my team put hands on them.”