But Bernice H. (Harriette) Taylor did not obstruct an ongoing U.S. Department of Labor investigation, according a report released today by the Office of the Inspector General.

Taylor, an attorney licensed to practice in Maryland since 1982, faces no sanctions from the city for her shredding activities.

In her final year of employment, she received $338,600, which included accrued personal leave, vacation pay and sick leave.

Comptroller Joan Pratt, whose six terms in office ends in December, was not present on August 6 when her former top aide spent nine hours, unsupervised and mostly alone, reviewing and “sporadically shredding” papers.

The destroyed material was described as “containing personal information that she [Taylor] believed was unimportant to the Office of the Comptroller or the Department of Labor,” including old or outdated memoranda and duplicate Board of Estimates documents.

Taylor reportedly came to City Hall at the request of a Pratt aide to review the family leave records of a sick employee and to clean out her former office. Taylor said she hadn’t had time to clear her office in previous months because she was responsible for the care of an elderly aunt.

Arriving shortly after 12 noon, Taylor was captured on film leaving the office at 9:23 p.m.

She is holding a purse, but she was not carrying any bags or boxes containing personal items that she had reportedly come to retrieve and had “packed away” while she was cleaning up.

(Taylor told investigators she was planning to take her personal items on another day.)

• Destruction of records should be punished, especially if done by a lawyer (8/17/20)

For 23½ years, Taylor occupied one of the most powerful posts in city government as clerk of the Board of Estimates.

She abruptly resigned last April, days after The Brew reported that her office was under an investigation by DOL’s Wage and Hour Division for allegedly forcing employees to work uncompensated overtime.

While second in rank to Comptroller Pratt, Taylor ran the department with a fierce attention to detail and earned a $172,000 salary, substantially more than Pratt, an elected official. 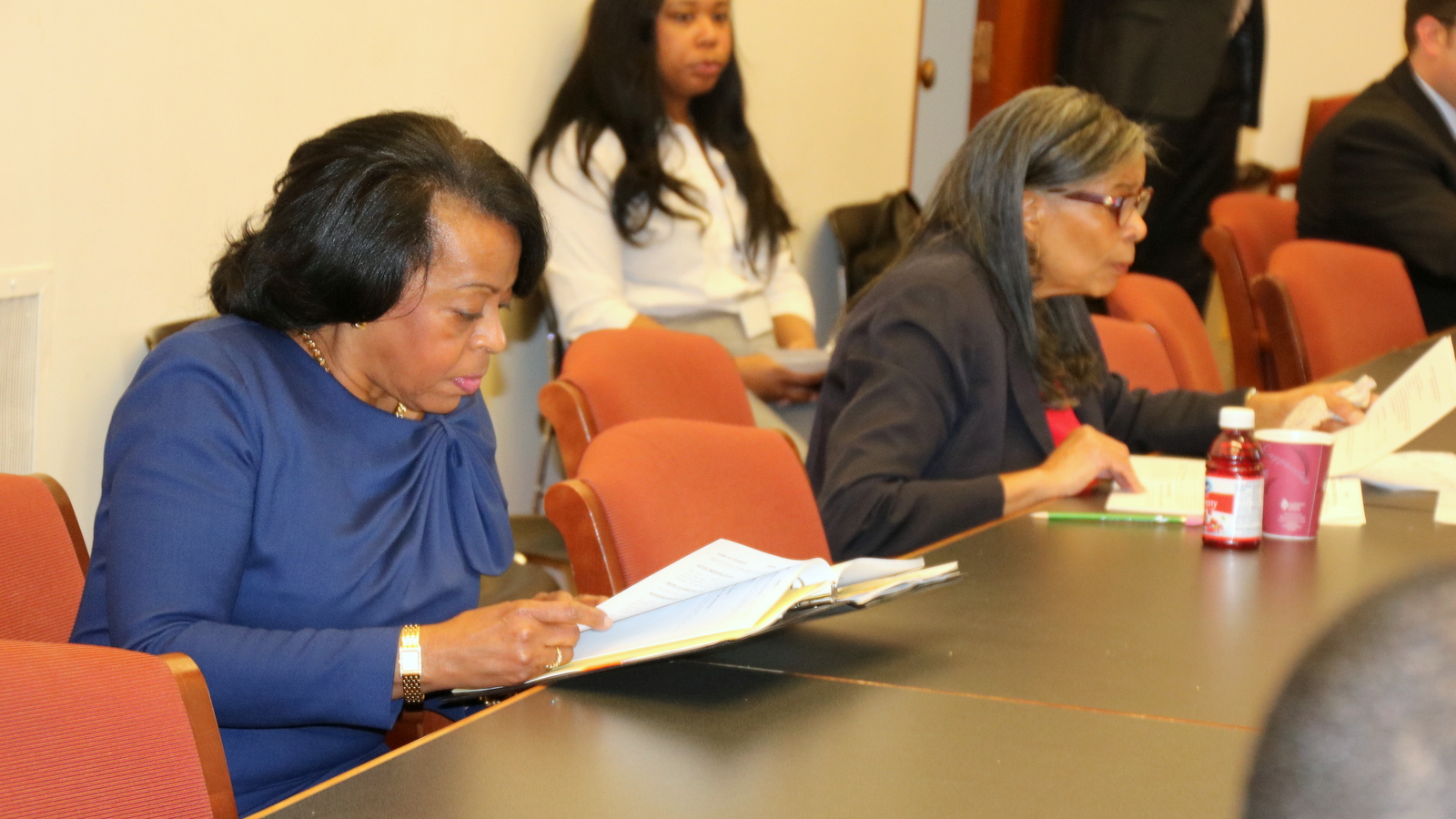 Harriette Taylor (seated right) and Joan Pratt review documents at a Board of Estimates pre-meeting shortly before Taylor retired in April. (Fern Shen)

While reporting no illegality, the OIG found indifferent security and lax procedures that allowed Taylor to breeze past City Hall’s security post, then remain long past regular work hours rummaging through papers in her office.

“On August 6, 2020, at 12:26 p.m., Taylor arrived at City Hall, proceeded to the entrance, walked past the security post and waved to the BPD officer. Taylor did not display a City identification card, and the BPD Officer did not stop Taylor and ask for her City credentials in accordance with the Mayor’s Office directives [that] had been emailed on February 19, 2020 from the Mayor’s Office to all City Hall staff, including BPD building security supervision for City Hall. The BPD supervisor acknowledged receipt of the email.” 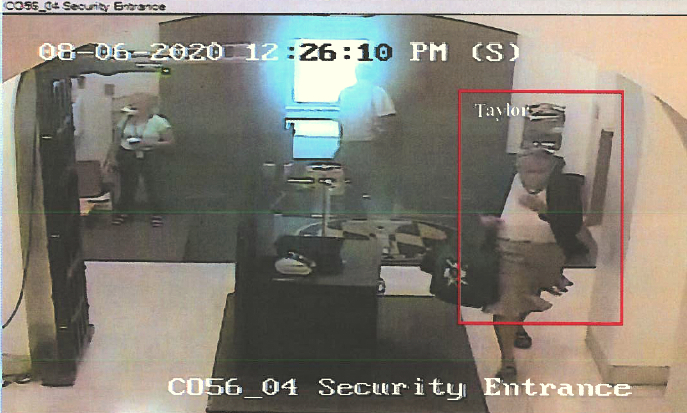 Visitors to City Hall are supposed to have an escort at all times – and a former employee should be accompanied by a representative from the Department of Human Resources.

But not Taylor. She ascended the south stairwell and entered the Comptroller’s Office through a side door, left ajar by an employee, which connected directly to her former office.

“Taylor did not display a City identification card, and the BPD Officer did not stop Taylor and ask for her City credentials in accordance with the Mayor’s Office directives” – OIG Report.

An HR rep met Taylor at the office and “asked if she needed any assistance with gathering her personal items, but did not ask her or anyone else how long Taylor would be on the premises or if anyone was overseeing her activities.”

The rep left at 12:38 p.m. – never to return – explaining to the OIG that “he did not believe he was supposed to escort Taylor to her office or supervise her while she was in the building.”

At 4:30 p.m., the office shredder was moved to an office connected to the one Taylor was working in. An hour later, the custodial staff was asked to remove six or seven trash bags reportedly filled with binders, books and other items from Taylor’s office.

For the next three hours, “she admitted that she began to sporadically shred documents she deemed unimportant as she was cleaning the office” – OIG Report.

When the last employee departed at 6:30 p.m., Taylor “admitted that she began to sporadically shred documents she deemed unimportant,” the report said. 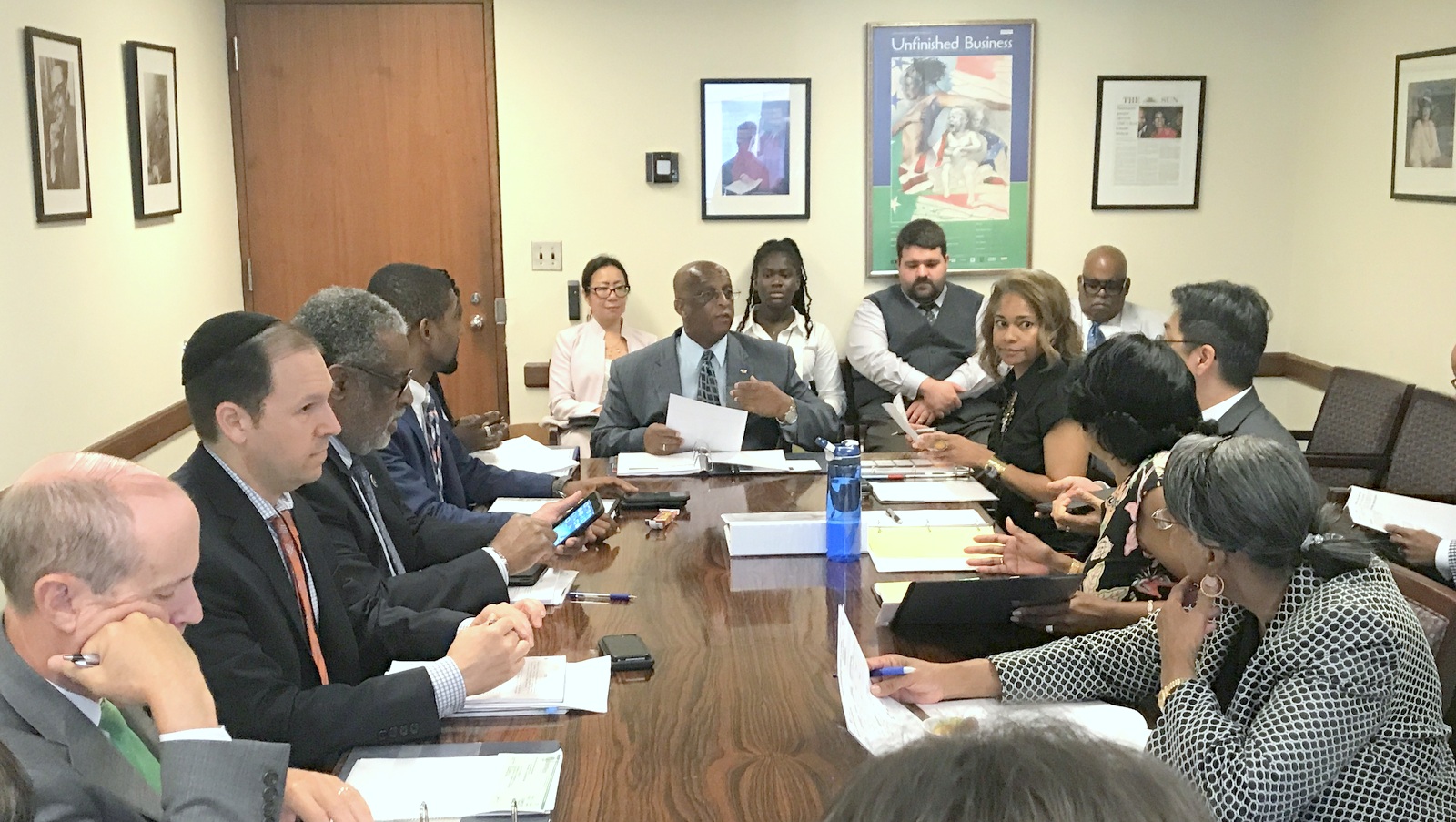 Harriette Taylor (far right) attends a pre-meeting of the Board of Estimates last year. At far left is Stephen Kraus, who was dismissed last month as deputy finance director after the OIG disclosed that he leaked confidential information to businessman J.P. Grant. (Mark Reutter)

This time she came boldly through the main entrance of the comptroller’s office and greeted a few employees. She then retreated to her former office and, by her account, “continued to shred outdated documents.”

Comptroller Pratt was again not present in the office – she told The Brew that she was completely unaware of what was happening on both days.

But others, including City Solicitor Moore and the OIG, had been notified of Taylor’s unauthorized shredding.

Shortly before 11:25 a.m., Taylor was ordered to leave the building. At 11:35, OIG investigators rushed into the office, where they were given “one clear trash bag full of shredded paper” as well as a filled black trash bag.

The OIG team ordered the office locked and left with the confiscated bags.

Exactly what was in the clear trash bag with shredded paper was not disclosed. Today’s report says only that the Department of Labor’s initial request for documents, made before August 6, was fulfilled, and a subsequent request, made after August 7, was also satisfied.

“Taylor’s actions did not disrupt or impede their investigation,” says the report. The results of the DOL investigation have not yet been made public.

For her part, Comptroller Pratt said she has instructed her staff to comply with the “Retention of Documents” rules of City Solicitor Moore, which do not sanction late-night shredding of records deemed unimportant by a retired official.