The woman who lets a reporter in the front door of 1639 North Fulton Avenue seems puzzled by questions about her impending eviction case, which names as defendants a 33-year-old man and “all occupants” of the house.

She does not seem to recognize the name of the property’s co-owner, Nick Mosby, and has no reaction when told the eviction itself may be improper.

Standing yesterday in the sparsely furnished front room surrounded by spot-spackled walls, the woman declines to give her name and hands back the case printout, shaking her head.

Currently a state delegate representing this poor West Baltimore community, Mosby has been in the news as the owner of a business based at a contributor’s office, the subject of a $45,000 tax lien by the IRS and the beneficiary of a job-creating scheme at City Hall.

A heavy favorite to win the City Council presidency this Tuesday, Mosby owns the modest rowhouse with Ronald Rock, a small-time landlord whose portfolio includes several city addresses – including this one – that court records indicate he sometimes rents by the room.

The block looks rough, with boarded-up and fading rowhomes. So far this year, there have been 10 homicides reported within five blocks of the front door – a few more than in 2009, when Mosby and Rock took out a $66,750 mortgage on the place.

The property is currently assessed at $15,667 for tax purposes.

Mosby joined the City Council as the area’s District 7 representative in 2011. He has disclosed ownership of the building on his ethics forms; it’s been no secret.

Tenants were evicted in 2012, 2016 and 2018, online court records indicate: little-noticed dramas in the city’s ongoing housing tragedy, where some 6,000 renters in a typical year are sent packing on a district court assembly line.

The latest eviction case at 1639 North Fulton was filed on October 16 as a “tenant holding over.” 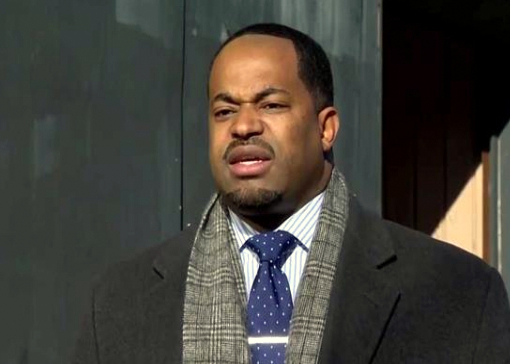 During Mosby’s 11 years as a co-owner, three sets of tenants have been evicted from the Fulton Street property. A fourth eviction is currently underway. (WBAL-TV 11)

Rock says Mosby has nothing to do with the house.

“Nick probably doesn’t know where the property is any more,” he says in a Saturday morning phone call. “He doesn’t reap any benefit from it. He cashed out over 10 years ago.”

“Nick probably doesn’t know where the property is any more. He doesn’t reap any benefit from it”  – Ronald Rock.

According to Rock, he and Mosby “paid cash” for the house, fixed it up and then borrowed against it, with Mosby taking a cash payout and Rock retaining the right to collect the rents – and sole responsibility for the mortgage even though Mosby’s name remains on it.

Mosby himself has been difficult to reach lately. He did not respond to an email and phone message left with his legislative staff. Attempts to reach him via two other numbers yielded only “mailbox full” messages.

What the Record Shows

The Fulton Avenue property has not been registered with the city’s housing department as a rental since 2017, according to an online tool.

The address also does not appear on the state Department of the Environment’s listing of lead-certified housing units.

If city and state records are accurate, the current eviction is not legal.

Rock did not address the lead paint issue but said the online tool indicating the house is not registered as a rental property is erroneous: “I pay my registration every year. Every January.”

He said his current tenants are a mother and son who “refuse to pay” rent even though they are on fixed incomes: “He doesn’t even fall under the statute under the covid.”

It remains to be seen if 1639 Fulton Avenue will add to Mosby’s apparent financial woes. Though Rock says he’s responsible for the mortgage, Mosby’s signature is on it, too, and Rock says business has not been good.

“I’m upside down with every single property,” he says, “so all I can do is put people in them and try to pay the mortgage.”

Rentals in Baltimore “have to be re-registered every year,” says Matt Hill, a lawyer with the nonprofit Public Justice Center, which represents tenants in housing cases.

“Ninety-five or 96% of the time the online listing is accurate. If the tenant you’re talking with wants to give us a call, we’d be happy to do an intake.”

Hill says 227 families were evicted in Baltimore in the month of September, despite what has been erroneously called a statewide moratorium on evictions because of the Covid-19 pandemic.

“95 or 96% of the time the online listing is accurate”  – Matt Hill, Public Justice Center.

“The governor’s order does not apply in a tenant-holding-over case, and that’s a huge loophole,” Hill says. “The landlords are filing these notices to vacate [after tenants stop paying rent] and then filing a tenant holding over and taking advantage to evict tenants who have lost their jobs. I meet clients like that all the time.”

Hill says that even when the building and its owners are properly licensed with the city and certified lead free, tenants who can show a loss of income due to the pandemic have a defense in some eviction cases, but they need to be proactive and contact a lawyer.

The case involving 1639 North Fulton is scheduled for January 4, 2021, which is less than four weeks after Mosby – if he wins election, as expected – will be sworn in as City Council president.