They’ve spoken in front of City Hall, at virtual press conferences and in city neighborhoods.

But until this morning, Cohen hadn’t said anything about her general election challenge against his fellow city councilman, Robert Stokes Sr., of the 12th District.

Now, one day before voters’ last opportunity to cast their ballots, Cohen has broken ranks with the local Democratic Party and formally endorsed Muller Paz, who is running as the Green Party candidate for the 12th District.

Cohen announced the endorsement on Twitter, ahead of an 11 a.m. press conference scheduled at Douglas Homes.

He spoke earlier about it with The Brew, saying, “I’m a proud, lifelong Democrat, but this moment is bigger than politics. And it’s bigger than party . . . Baltimore needs leaders who are unafraid to fight for justice, even when there are consequences.”

“Baltimore needs leaders who are unafraid to fight for justice” – Zeke Cohen.

Cohen said he’s known Muller Paz since she was a student at Goucher College and he was a teacher in West Baltimore. (He also clarified that he has voted for Democrat Joe Biden for president.)

Cohen is the only Council member to endorse her, although Delegate Robbyn Lewis showed public support by contributing to her campaign.

The southeast councilman, representing Canton, Patterson Park, Fells Point and Little Italy, said he’s been in awe of the momentum the Muller Paz campaign has gathered in a short time.

“I’ve never seen anything like this in three and a half months, where people who are cynical about politics have come together to support someone, to engage, to participate in our democracy,” Cohen said.

“I think what my support does is legitimize that there is someone currently on City Council who is willing to risk political capital to support someone who is not from his party,” he continued.

Muller Paz, 32, is a Peruvian immigrant who teaches Spanish at City College. She is the high school’s elected Baltimore Teachers Union representative and advisor to the student activist group SOMOS.

Her surprisingly competitive campaign, with what some say is the best chance a third-party candidate has ever had in Baltimore, has provided some local zing to a general election that is otherwise laser-focused on the national election.

Supported by more than 300 volunteers, Muller Paz has raised over $120,000 since she began running in July, with an unusually high proportion of small-dollar contributions.

She’s also collected many high-profile endorsements from groups including the Metro Baltimore AFL-CIO, Sierra Club and Democratic Socialists of America. 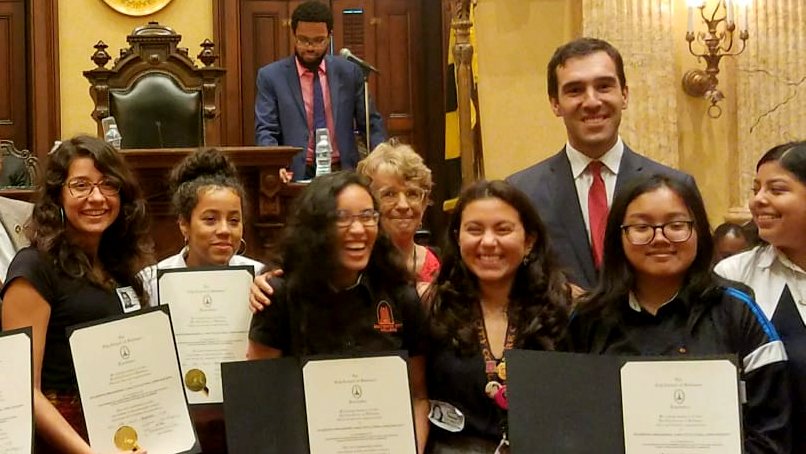 Standing with Cohen at Douglas Homes, Muller Paz thanked him for working with her to help students unable to access virtual learning and for lending support to her longshot bid for a council seat.

“When we learned so few of our students had quality devices to connect to their classes, we fought to win $3 million to help close the digital divide in Baltimore City,” she said in a statement released today.

“We have built a broad coalition that brings people together, based on our shared values,” she said. “I am grateful to Councilman Cohen for his endorsement, and I am ready to continue working alongside him on the Baltimore City Council!”

Stokes, 52, has served on the Council since 2016, but has been involved in Baltimore politics for years.

Before he was elected, he worked for former Councilman Carl Stokes, to whom he is not related.

He has not been actively campaigning, relying instead on the traditional Democratic base to come out and vote for him. (He also hasn’t answered our calls for comment.)