For James Trent, who lives in a tent under the I-83 overpass, being forced to leave would be the latest in a string of troubles that have made it harder for him to escape homelessness and get his life together.

According to Trent and 30 others living on a city-owned parking lot at the intersection of Centre Street and Guilford Avenue, Baltimore officials recently showed up and told them they must move out by Thursday – today.

Trent, 60, said he can’t believe the city is forcing homeless people to move during a pandemic instead of helping them find finding permanent housing.

“At least here you pretty much know everyone is clean and you’ve got your own space, compared to over in the shelters where you don’t know who’s bringing that shit in,” said Trent, who said he’s been living under the Jones Falls Expressway for about two months.

A former truck driver who said cocaine use has contributed to his struggles, Trent said he would rather take his chances on the street than go to a shelter.

“It’s when you get around people that you get outbreaks. It’s safe here”  – James Trent.

“The homeless population’s corona rate is very low,” he said. “It’s when you get around people that you get outbreaks. It’s safe here.”

Trent added that he still has a commercial license, and that his goal is to one day resume work as a truck driver and find permanent housing. He said he’s been on the city’s housing wait list for two years. 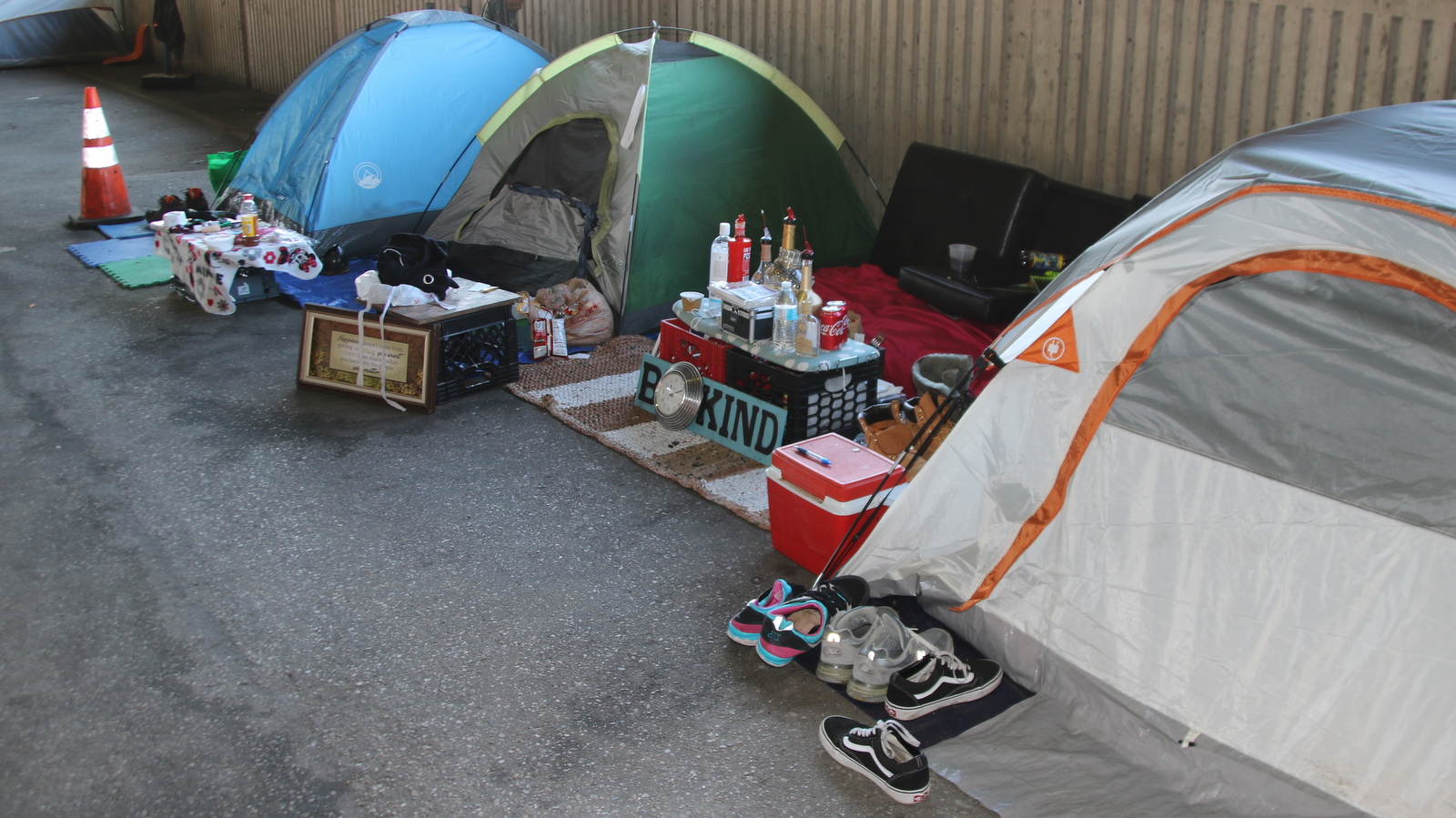 Outside a cluster of tents along Guilford Avenue, makeshift tables hold a neat array of snacks, toiletries, bottles of soda and, in one case, a mini-bar. (Louis Krauss)

Baltimore’s homeless population always faces challenges as winter approaches, but this year their difficulties are compounded as Covid-19 cases and deaths surge locally and across the country.

In an email to The Brew, James Bentley II, spokesman for Mayor Bernard C. “Jack” Young, said none of the people living in this Guilford Avenue encampment have shown signs of Covid-19 symptoms.

We are “working daily to refer the homeless residents at Guilford/Centre St. to shelter and supportive services”  – mayor’s spokesman.

He acknowledged that the city plans to clear people from the site, but said they have until by November 19 – one week later than what camp residents believed to be the clear-out date.

“The Mayor’s Office of Homeless Services is working daily to refer the homeless residents at Guilford/Centre St. to shelter and supportive services,” Bentley said in the e-mail. “Flu shots, shelter, housing support, case management has been offered to all who are located in this encampment.”

He also said that “one family and three females” agreed to leave the site and go to a shelter.

Bentley did not say whether the campers were being moved to facilitate parking for city vehicles, as indicated by new signage at the lot.

A couple of days ago, Trent and others said, the city workers went around to several “No parking” signs with an image of a snow truck, pasting on new labels so that they read “November 13 2020 to March 31, 2021.” 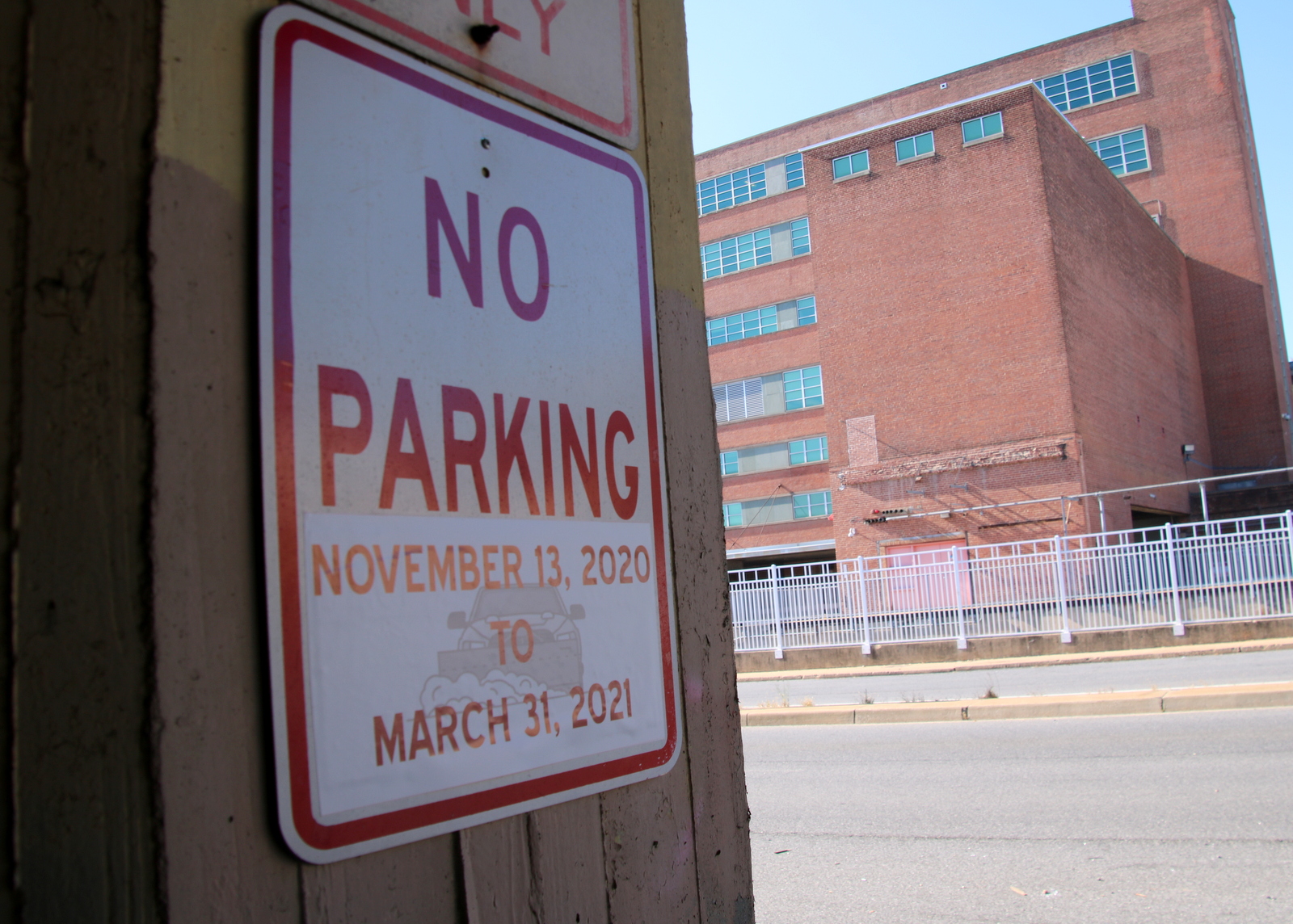 The date range added to this Guilford Avenue “no parking” sign on a city lot below the JFX. (Louis Krauss)

Underneath this section of the highway, a small community has built up over the years with tents set up along a partially walled-off parking lot.

Some pile their things in crates and bags against the concrete barriers on the sides, while others set up a full campsite, with colorful decorations, recliner chairs and a miniature bar for social drinking.

With few exceptions, say residents, everyone here gets along at the tidy, litter-free encampment. Now, it appears, they will have to leave.

“A lady and one other guy showed up in a city car a couple weeks ago and told us that the mayor says we all got to go,” one camp resident said.

Several said they believe they are being displaced so that city vehicles can be parked there.

The camp-clearing is happening at a time when the city is planning to move out the roughly 400 homeless people still living in hotels provided last spring after the city closed shelters during the early days of the pandemic.

The issue was addressed by Young administration officials during a hearing last month of the City Council’s Housing and Urban Affairs Committee. (Homeless Services Director Jerrianne Anthony was placed on leave in July, and Tisha Edwards has since acted as homeless director.)

The city intends to relocate all of those placed in hotels by the end of December, Edwards said at the hearing.

Bentley updated those comments yesterday to say the Office of Homeless Services has not officially determined a date to move out residents, and that they are “assessing next steps, which is based on many factors.”

Edwards has said they are working to ensure shelters meet federal CDC guidelines for congregate living, before reopening them.

“Returning them from hotels will almost certainly increase rates of infection and death among folks who are homeless”  – Dr. Mihir Chaudhary.

Dr. Mihir Chaudhary, who has served as medical director of the Baltimore Convention Center’s field hospital for Covid-19, argued that returning residents to shelters during the winter could lead to serious virus outbreaks.

“This past week our number of patients increased by 500%, which follows along with the recent nationwide surge of Covid-19,” Chaudhary, a Johns Hopkins physician, said at the hearing.

“A large number of these individuals have been exposed to the city’s shelter system, with over 80% having prior exposure to the shelters,” he said.

Winter would be an unwise time to return homeless people to congregate shelters due to higher concentrations of people indoors during the cold weather, combined with the added dangers of flu season and people traveling for the holidays.

“Returning them from hotels will almost certainly increase rates of infection and death among folks who are homeless, and among the community at large,” Chaudhary said.

Edwards said the city has used part of $130 million in federal pandemic aid given to Baltimore through the federal CARES Act to address homelessness, funds that must be used by the end of the year.

The city has also received $7.2 million from the U.S. Department of Housing and Urban Development, which would subsidize housing for 150 especially vulnerable homeless people, Edwards said, adding that the money would pay for housing for up to 18 months. 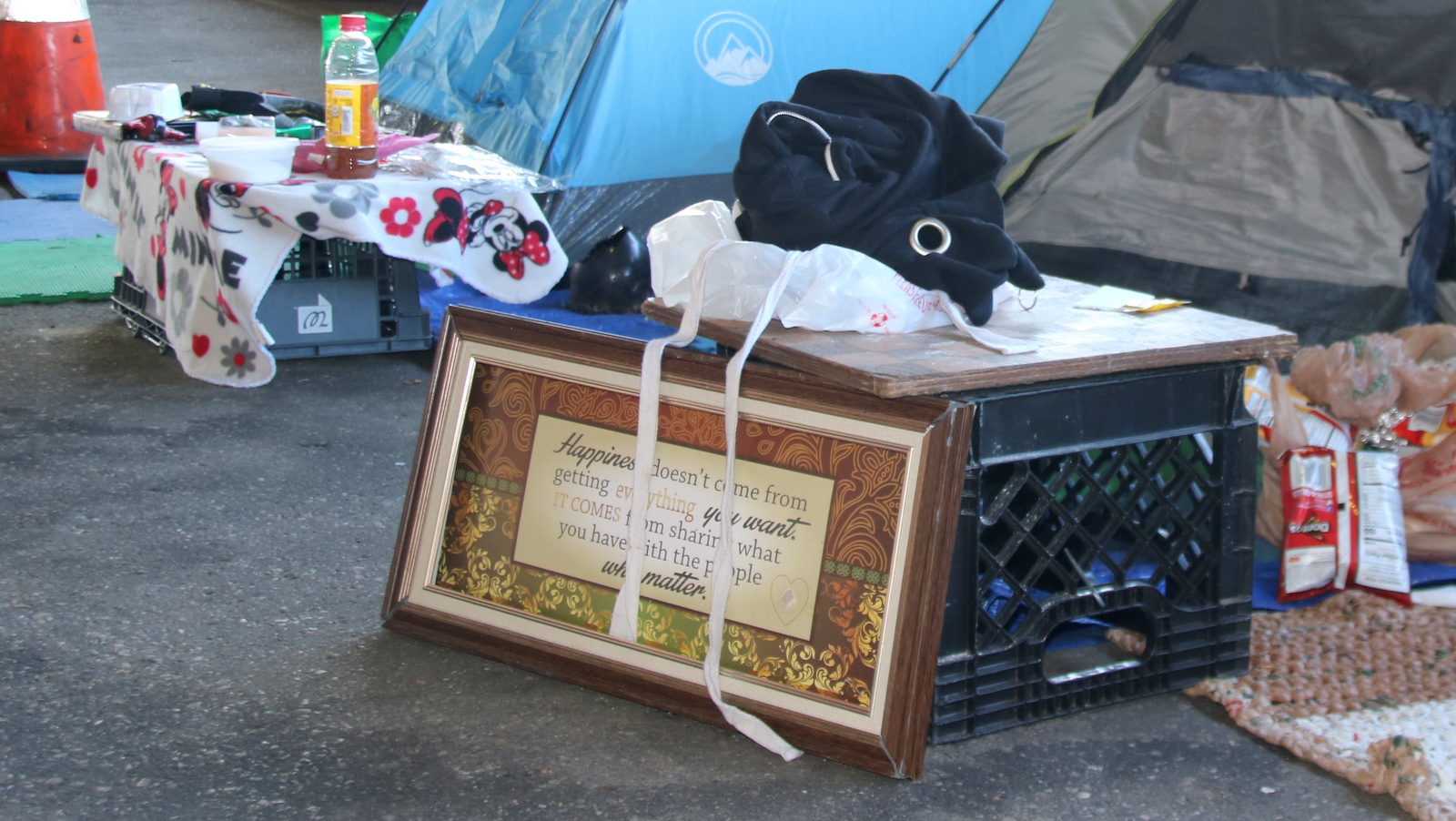 A framed print outside a tent says, “Happiness doesn’t come from getting everything you want. It comes from sharing what you have with the people who matter.” (Louis Krauss)

Some tent inhabitants were in good spirits earlier this week, confident that advocates would be able to stop city workers from clearing the site.

But 50-year-old Alfred Woods, who’s been homeless for 10 years, was pessimistic and livid about the city’s plans.

“Do you think it’s right for the city to treat people on the street like this?” Woods said. “To kick them out of here when they’ve got all these empty houses they could put people in, so they can park trucks here?”

Christina Flowers, a homeless service provider who was directing trash pickup, said the city should refrain from forcing people to leave the tent community without finding a safe place for them to move to.

“They can’t just show up out of nowhere and kick people out of here during a pandemic. It’s unacceptable,” she said. “The city needs a different approach. They need to engage with them, and not just push them around the city.” 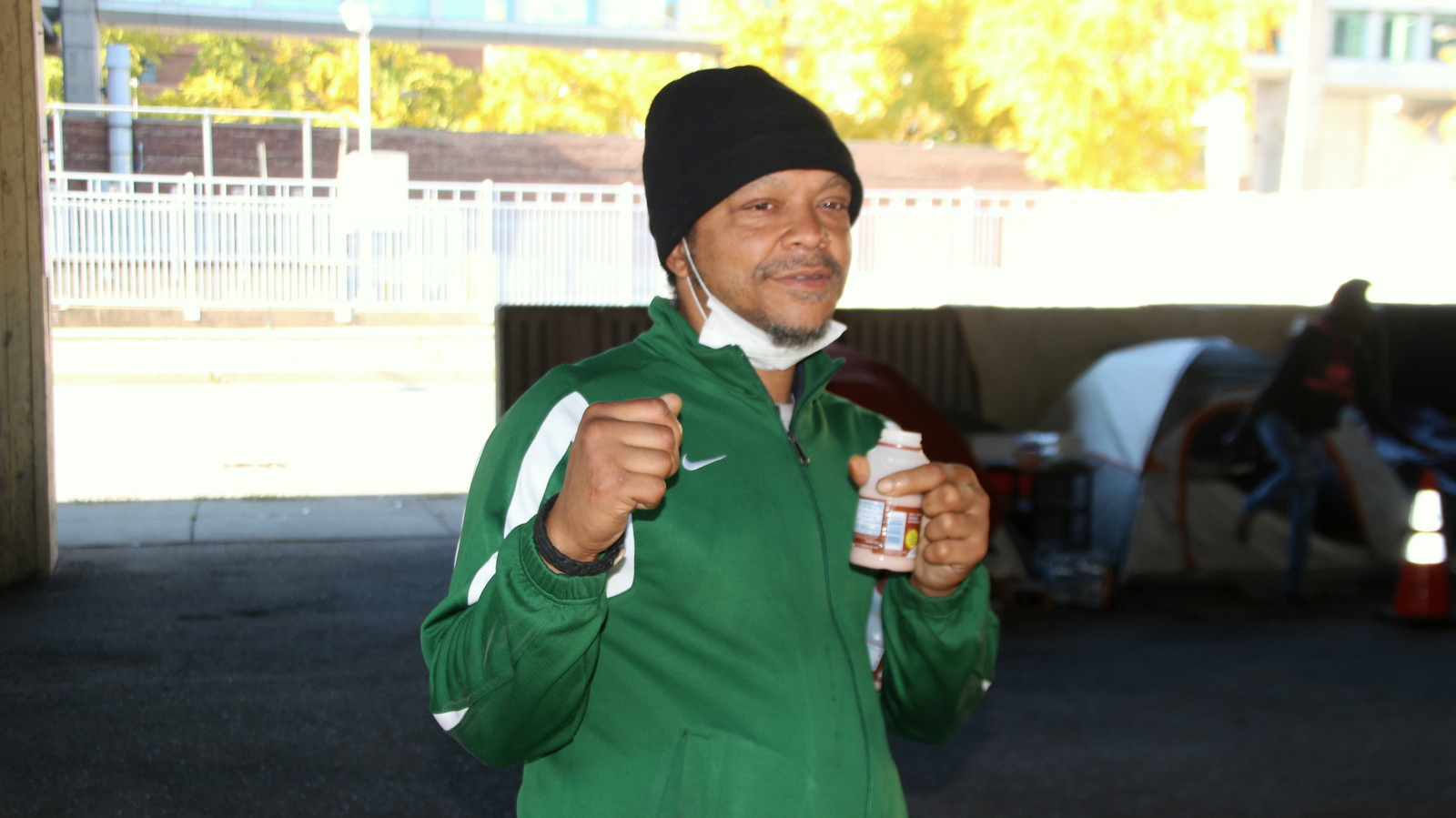 Asked what she will do to prevent the city from destroying the site, Flowers said, “They’re going to need a lot of tow trucks because I’m going to bring some RVs up here to block them.”

David Daughton, who lives under the overpass, wasn’t sure what to say when asked where he would move next.

“This isn’t right, man. You’ve got the president and the mayor giving out all this money to assist people during the pandemic, so how about giving some to build better shelters or some houses for us?” the 43-year-old said.

“In terms of where I’ll go, your guess is as good as mine. I’ll go wherever the wind blows.”