Some City Council members are seeking to override Mayor Bernard C. “Jack” Young’s vetoes of two workers’ rights bills sponsored by Kristerfer Burnett in order to give hospitality workers the right to be first in line to get their jobs back.

One insider said they have the votes to defeat the outgoing mayor on one of the high-profile battles late in his administration.

“I think the votes are there,” said Councilwoman Mary Pat Clarke.

But it still isn’t clear which way the issue will go. Since Young vetoed the bills on Monday, Burnett has been in touch with many – but not all – of his colleagues.

He, Clarke and Councilman Bill Henry spoke today at a press conference organized by UNITE HERE Local 7, which represents the affected workers.

The Council would need 12 votes to override Young.

One of Burnett’s bills passed unanimously; the other passed with 12 votes. Council members Eric Costello, Leon Pinkett and Isaac “Yitzy” Schleifer voted against it.

If one more member voted to uphold Young’s veto, the bills would fail. 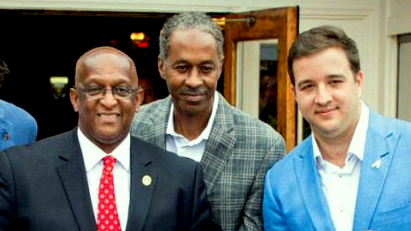 Now many are wondering who that crucial pro-Young vote could be.

Councilman Robert Stokes is a staunch ally of the mayor, but he was endorsed by UNITE HERE Local 7 and voted for the legislation the first time around.

The union also distributed campaign literature for him, according to Dan Sparaco, a 12th District resident and former Council president candidate.

Stokes has not returned a call from The Brew.

Burnett said there is time for an emergency meeting before the last scheduled meeting of the term on December 7.

Stokes, he said, has not given him a definitive answer.

“He said he hadn’t decided one way or the other,” Burnett said. “I’d be shocked if he changed his mind on that. I’ll start freaking out later.”