Mayor Brandon Scott has settled on James L. Shea, the éminence grise of Baltimore white-shoe lawyers, as his new city solicitor, The Brew has learned.

He is set to succeed Dana P. Moore, who is expected to be named director of the city’s Office of Equity & Civil Rights, which has been without a head since August. Neither could be reached for comment.

As chairman emeritus of Venable, one of Maryland’s largest law firms, Shea is the ultimate insider.

He’s also been chairman of Empower Baltimore Management Corp., which provided job training and money to businesses in East and West Baltimore.

While at 68 Shea is nearly twice Scott’s age, the two bonded under unusual circumstances two years ago

Turning to politics after he retired from active management at Venable, Shea announced a run for Maryland governor in 2018. He plucked Scott out of the relative obscurity of the City Council to become his running mate as lieutenant governor.

While the Shea-Scott ticket got shellacked in the Democratic Party primary, Scott gained considerable political capital. 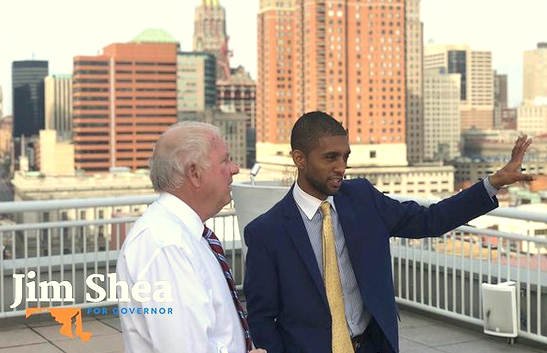 Jim Shea and Brandon Scott in downtown Baltimore. They campaigned in all 24 Maryland jurisdictions in a losing bid to win the 2018 Democratic primary for governor and lieutenant governor. (@sheaformd)

He won statewide visibility as a young Black politician whose star was rising and crossed the racial fundraising divide with the help of Shea and his connections.

Cash accumulated by the People for Brandon M. Scott committee grew from $57,000 before the primary race to nearly $150,000 in early 2019, according to state campaign records.

The Shea-Scott for Maryland Slate contributed $62,000 to that, and James and Barbara Shea personally gave the committee another $12,000.

The war chest established Scott as a credible candidate for mayor after Catherine Pugh’s “Healthy Holly” book scandal knocked her out of the 2020 race.

Aside from his experience running a large organization, Shea is expected to open doors to Scott among the city’s business elite who have cast a skeptical eye on his talk of “systemic change” and “equity” during the mayoral primary.

He will also bring to the table the insights and contacts of a confidant of former mayor and governor Martin O’Malley, who still wields considerable behind-the-scenes power in Baltimore.

Born in the city, Shea went to Andover Academy in Massachusetts, where he attended class with future Florida Governor Jeb Bush and Baltimore Solicitor André Davis (whose position was filled last February by Moore).

He graduated from Princeton University and got his law degree from the University of Virginia.

To accept the city solicitor post, Shea will have to acquire a city address. He currently lives with his wife Barbara on a three-acre spread in Owings Mills.