After two years of study, the Commission to Restore Trust in Policing, established by the Maryland General Assembly to review the operations of the Baltimore Police Department following the Gun Trace Task Force scandal, issued its final report.

It was scarcely worth the wait. In particular, the changes it recommends to Maryland’s Law Enforcement Officers’ Bill of Rights (LEOBR) are woefully inadequate.

The Officers’ Bill of Rights governs the process by which police officers are disciplined. It hands to officers procedural safeguards far in excess of those given to other civil servants, ostensibly to protect them from unjustified disciplinary actions.

The commission failed to confront the fact that the legislation has been a huge hindrance to investigating and rooting out bad cops, especially in Baltimore.

By making the process inordinately complex and slow, it results in a disciplinary system that tends to get rid of ticking time bombs only after they explode. It has allowed corrupt and abusive officers to achieve critical mass in Baltimore and to dominate the department’s organizational culture.

The commission’s recommendations only nibble around the edges of the problem. LEOBR does not need to be touched up; it needs to be completely overhauled or eliminated. 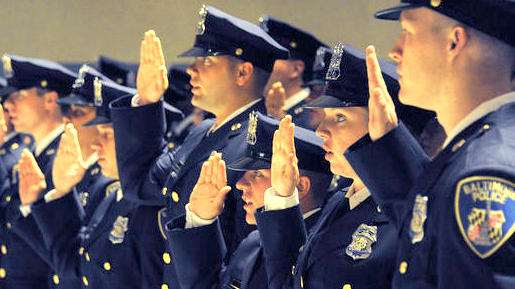 Police cadets in Baltimore at their swearing-in ceremony. (BPD)

The formula for a successful disciplinary system in the Baltimore Police Department is straightforward:

• Make the police commissioner personally accountable for the discipline of the BPD and give him or her broad authority and the tools to implement that mandate.

• Open the commissioner’s disciplinary decisions to public scrutiny, so that his or her performance can be judged not only by city officials, but also by city residents.

• Fire the commissioner if he or she fails to maintain departmental discipline.

Why has it been so hard to implement these reforms?

For the answer, look no further than the political influence of police labor unions in Maryland. A little history on LEOBR is instructive.

Enacted in 1973, Maryland’s LEOBR was the first law of its kind in the nation. It still is considered the most restrictive on the power of police departments to discipline officers.

The law had its intended effect. It severely weakened the ability of police chiefs to control misconduct.

The impetus for the statute was the housecleaning of the BPD undertaken by former commissioner Donald Pomerleau.

Pomerleau was appointed in 1966 with instructions from Mayor Theodore McKeldin to clean up the corruption then rampant in the BPD. He did so with gusto. Police unions accused him of purging good officers as well as bad and turned to Annapolis for salvation.

The General Assembly responded to the pressure.

In an ill-conceived move without precedent in the law governing the discipline of civil servants in Maryland, it stripped the power to initiate disciplinary action against officers from police chiefs and gave it to panels of fellow officers accountable to no one. It also added numerous other conditions on the manner in which police misconduct is investigated and discipline meted out.

The law had its intended effect. It severely weakened the ability of police chiefs to control misconduct and elevated the job of being a law enforcement officer from a civil service position to a virtual entitlement. Never again would a commissioner like Pomerleau have the power to weed out bad officers.

LEOBR solved a problem that did not exist, and created a whole set of new problems that persist to this day. 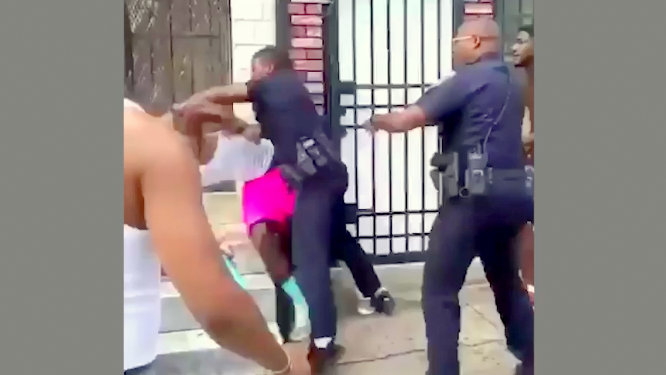 Caught on video in 2018, a Baltimore police officer assaults a man who dissed him. (YouTube)

The commission’s report did not recommend changing the basis structure of the LEOBR. Instead, it recommended complicating the process even further.

Criminal defendants in Maryland get imprisoned for life with less due process than it would take to fire a corrupt officer if the commission’s recommendations on LEOBR are enacted.

Why did the commission blink when it came to reform of LEOBR?

I believe that it was for the same reason that it failed to address the role that Lodge 3 of the Fraternal Order of Police (FOP) plays in promoting what the commission describes as an “internal culture resistant to discipline” in the Baltimore Police Department.

Lodge 3 is the union that represents Baltimore Police officers in the ranks of lieutenant and below. For years it and other police unions have enlisted the support of powerful political allies, including Maryland Governor Larry Hogan, to resist calls for reform of LEOBR.

It appears that FOP had allies among the seven members of the commission, which included Gary W. McLhinney, a former BPD officer and longtime president of Lodge 3 appointed by Hogan.

It also included Sean R. Malone, former chief legal advisor and chief of professional standards for the BPD who in private practice successfully defended Officer Caesar Goodson Jr. against criminal and disciplinary charges arising from the death of Freddie Gray.

It would be entirely appropriate for the commission to call McLhinney and Malone as witnesses for their views in my opinion. However, it was inappropriate to name former departmental insiders to a commission whose independence from the BPD and FOP was vital to its credibility.

The commission becomes yet another official body reluctant to step on the toes of Maryland’s law enforcement officer unions.

Whatever the reasons, the commission’s prolix report conspicuously avoids topics that might offend the union.

For example, the report takes certain commissioners and command staff to task by name, including current commissioner Michael Harrison. It contains not one word of criticism, however, for the incessant attacks on Harrison by FOP.

Sgt. Mike Mancuso, the current president of Lodge 3, has had a beef with Harrison going back to Harrison’s testimony against a union-backed bill that would have curtailed the authority of the City Council to establish the scope of collective bargaining between the city and the union.

Soon thereafter Mancuso and other union members began publicly questioning Harrison’s competence by accusing him of not having a workable plan to reduce violent crime.

In another example, the commission lamented the fact that BPD sergeants, who are the department’s front-line supervisors, are loath to report wrongdoing by their subordinates. Although nominally in separate “bargaining units,” both sergeants and their subordinates belong to and are represented in contract negotiations by Lodge 3.

A standard first step in establishing effective supervisory relationships is to prohibit supervisors from being represented by the same labor union as their subordinates.

Yet the report makes no mention of adopting such a prohibition. The commission is just one more official body reluctant to step on the toes of Maryland’s law enforcement officer unions.

The citizens of Baltimore desperately need an effective police department. BPD will not be one until it regains the public’s trust.

And trust will not be restored as long as LEOBR places the rights of police above the rights of ordinary citizens to be protected by well-disciplined, law-abiding officers.