Today, Comptroller Bill Henry asked why the Police Department settled an excessive-force lawsuit against two officers for $550,000 without taking any disciplinary action against them.

The cash settlement was offered to Eric Jones, who suffered traumatic brain injury (TBI) in 2014 after he was tackled and “taken down” by two officers who were investigating drug activity in Northwest Baltimore.

Jones was transported to Sinai Hospital for emergency surgery as “an unfortunate result of the encounter,” Elizabeth Walden, chief counsel for the Baltimore Police Department, acknowledged today.

“I want to get a better understanding of why we are settling a case where the officers apparently did nothing wrong,” Henry explained at the Board of Estimates meeting.

Walden said it was correct that Officers Joshua Jordan and Russell J. Tonks were never disciplined by the BPD, but “the department did, in fact, investigate the situation because of the severity of the injuries” to the part-time plumber, now 59 years old.

“They examined the circumstances of the tackle and the injuries,” she noted.

“They subsequently collaborated with the state’s attorney’s office about the possibility of criminal charges, which were declined,” she continued. “And, ultimately, the Use of Force Review Board looked at the officers’ conduct and measured it against the existing policies at the time and concluded there was no violation of policy here. So that’s the reason why the officers were not disciplined.”

Walden went on to contextualize BPD’s disciplinary procedures in 2014, noting that they were far different than today’s rules governing the police.

“This is an older incident, the processes of the department evolved over time and, with our work under the consent decree, BPD has industry-leading policies on use of force, stops, searches and arrests,” she said.

While judged not culpable for Jones’ injuries by their peers in 2014, Officers Jordan and Tonks came under fresh scrutiny when the victim filed a civil case, Jones v. Jordan, et al., in U.S. District Court in Baltimore on July 22, 2016.

Turning the tables on those who had arrested and injured him, Jones alleged that his constitutional rights were violated.

By that time, Jones had been acquitted of six charges arising from the incident, including drug possession, intent to distribute, resisting arrest and second degree assault of a police officer. The state’s attorney’s office had dropped a seventh count.

Turning the tables on those who had arrested and injured him, Jones alleged that his constitutional rights were violated by unlawful search and seizure, excessive force, fabrication of evidence, false imprisonment and false arrest.

Judge George L. Russell III denied the city’s motions to dismiss the case, saying the officers (Tonks had since left the force) were not entitled to “qualified immunity” because they did not appear to follow procedures while conducting a police field interview.

In a field interview, a potential suspect is free not to respond and free to leave the scene. But “it is undisputed that when Officer Defendants stopped Jones, Jones was not free to leave,” Russell noted in a September 13, 2019 opinion.

It was also unclear if the officers had sufficient evidence to forcibly detain Jones and, further, if they used appropriate force when he tried to leave, according to Russell.

“According to Jones, Officer Jordan tackled him and struck him with either a baton or his fist after he was on the ground, rendering Jones unconscious,” he wrote. “Conversely, Officer Jordan alleges that Jones ran away from Officer Defendants, and that after he tackled Jones, a physical altercation ensued at which point Jones attempted to strike him.”

Did the police throw Jones “on a patch of grass,” as Jordan wrote in his incident report, or was Jones tackled in the street, resulting in his head hitting the pavement?

Such matters “must be resolved before it can be determined whether Officer Defendants used appropriately proportionate force in arresting Jones,” he wrote.

Russell’s opinion, reaffirmed by a second memorandum rejecting the officers’ defense of immunity, led to the settlement of the case, “notwithstanding that we did not believe the officers engaged in any misconduct,” Walden told the BOE today. 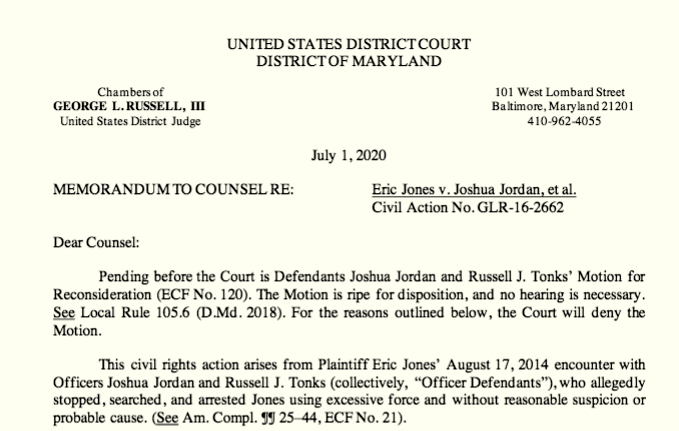 The alternative of going to trial was risky, Walden said, because of the chance the jury was going “to see a sympathetic plaintiff, who has legitimate and serious injuries, and conclude that there needs to be an award to that person that could well, well exceed the settlement that we reached here.”

Jones had originally asked for more than $1 million in damages.

The city was ready to settle for half that amount in return for the dropping of a lawsuit that included not just two patrol officers, but former Commissioner Anthony W. Batts and “unknown supervisors of the BPD” (the et al. in the case) who allegedly turned a blind eye to the practice of violent citizen arrests.

This detail was not mentioned by Walden in her five-minute presentation.

“I think that answers my question,” Henry said after she finished.