When South Baltimore resident Julie Tice heard the news that city bars and restaurants will be allowed to reopen tomorrow, she wondered whether Mayor Brandon Scott was bowing to pressure “with the Superbowl just two weeks away.”

“It’s frustrating and it just feels like a knee-jerk reaction,” said Tice, an architect who previously lived near Cross Street Market, home to bars that sometimes overflow with large, boisterous crowds, especially on game days.

The owner of one of those bars confirmed yesterday that the local hospitality industry had been lobbying Scott, but said he came away thinking that their entreaties hadn’t worked.

Over the weekend, he and about 25 other owners got on a conference call with Scott asking him to lift the ban, said David Rather, owner of Mother’s Grille, which has a location in Federal Hill, as well as two suburban locations that have remained open.

“I’m shocked. I didn’t think we had any sway over him. I have no idea what changed his mind,” Rather said. “A lot of the callers were borderline in tears saying they’re exhausted, losing a lot of money, with no end in sight.”

“Maybe he had already made up his mind and just didn’t want to say,” Rather continued, calling the conference call “a little focus group for him to do some listening.”

Scott halted indoor and outdoor dining five weeks ago when coronavirus cases were rising sharply in the city, as they were in Maryland and across the country.

Restaurateurs held protests and the Restaurant Association of Maryland challenged the restrictions in court, but a Circuit Court judge upheld them as a necessary public health measure.

Yesterday, Scott announced that bars can reopen for indoor and outdoor dining at limited capacity beginning at 6 a.m. on Friday.

“We are seeing slight reductions in cases and appear to be past the New Years holiday and holiday season peak,” he said at a news conference held in Park Heights.

Under the new order, restaurants and bars may operate outdoors at 50% of capacity and indoors at 25% of capacity. Diners will have a one-hour time limit, and restaurants are required to keep a sign-in and sign-out log for all patrons.

Scott also eased restrictions for gyms, which will now be permitted to hold up to 10-person classes, and for indoor recreational venues, with the exception of adult entertainment and hookah or cigar lounges. 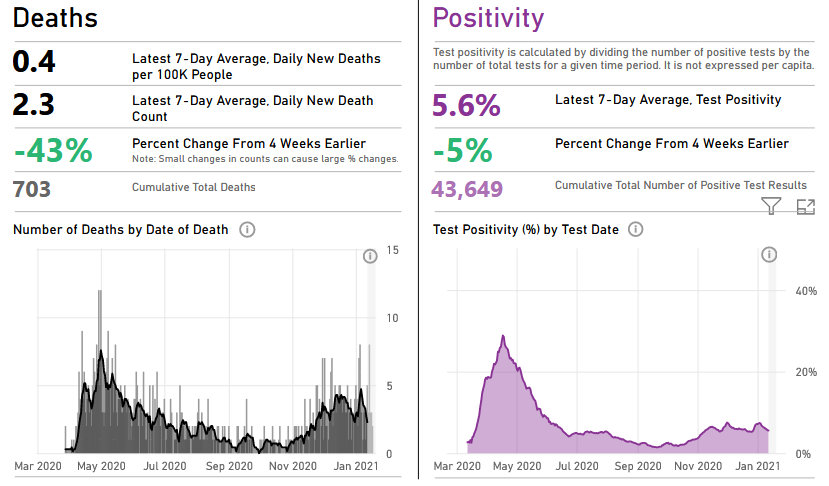 “With the recent leveling of cases and to address the economic impact of Covid-19, we are adjusting our mandates, which will be in effect for the next four weeks at least,” Scott said.

“Although this is good news, we are still counting on everyone to be responsible and maintain this downward trend,” he cautioned, with Health Commissioner Letitia Dzirasa at his side.

He noted that at 5.65%, Baltimore has the lowest seven-day average positivity rate in Maryland. The statewide average is 7.6%.

“Too soon for this”

Tice fears that relaxation of the restrictions is premature, especially with “virulent new strains”of the deadly pathogen turning up in the U.S.

“I respect and appreciate that Mayor Scott is data driven and has held the line as long as he has,” she said, but believes that at least a few “knuckleheads” will not practice social distancing and mask wearing while eating and drinking, potentially leading to another spike in Covid-19 cases.

“It feels like things were finally tamed a little bit and tamped down, but not out,” she fretted.

Some noted that while deaths and positivity rates have been declining, they are far from the low levels reached in the fall before the current resurgence. The positivity rate on September 22 was 1.5%.

The bookstore-cafe Red Emma’s denounced the relaxation of restrictions, noting that restaurant workers are not yet eligible for vaccines “because the city is still rightfully vaccinating health care workers.”

“It’s too effing soon for this,” the Mt. Vernon eatery tweeted yesterday. “Nobody needs to eat inside a restaurant rn. Give us a subsidy to pay wages and keep ppl home.”

Nowhere Near Breaking Even

Meanwhile, the Restaurant Association of Maryland released a statement applauding Scott’s decision saying it will “give the food service industry a fighting chance to overcome the financial hardships brought on by this pandemic and hopefully prevent further restaurant closures.”

Scott’s announcement came as good news to Rather, whose Federal Hill location has been offering only carryout and delivery service. He said he’ll now be “scrambling” to get ready to open for in-person dining tomorrow.

“Even just 25% [capacity] will help. We’ve been getting crushed. We’re nowhere near breaking even,” Rather said, noting that he had to let some employees go, though “I kept as many as I could.”

“Sometimes you have to debate people about the masks,” Rather said, noting that his customers in the city “are more willing to follow the rules.”

Rather disagreed with those who say opening city restaurants will lead to another resurgence of Covid. He said most of the people he knows who tested positive for the virus were infected as a result of family and friend gatherings in private homes, not in restaurants.

But he also acknowledged that it’s often difficult to make restaurant patrons abide by the rules and keep their masks over their mouths except when they are eating or drinking.

“Sometimes you have to debate people about the masks,” he said, noting that his customers in the city “are more willing to follow the rules” than those in the county.

In all of his establishments, Rather said, he and the staff work hard to ensure they operate safely.