New Refuge Deliverance Cathedral in Mt. Vernon will be called New Life Evangelical Church when it reopens as part of the Olivet Assembly USA network later this year.

The historic sanctuary will be preserved as much as possible, including the pews, altar and Tiffany windows, and retrofitted with state-of-the-art video technology so services can be viewed online or in person.

And the controversial scaffolding that has surrounded the building since 2013 should be gone “within the year” after exterior repairs are completed to make the area safe from falling roof tiles.

Chiu told The Brew that Olivet is moving quickly to assess what’s needed to repair the church after years of deferred maintenance made it a safety hazard to the community, and said work on the roof and spire is a top priority.

Asked the timetable for opening New Life, Chiu said it will depend on whether it’s safe for worshippers to come inside while repairs are underway or if it would be better to wait until exterior work is complete and the scaffolding comes down.

“It’s going to take us, I would say, probably two weeks or so to assess what our next step is with renovation and if the renovation is safe for the congregation to move in first,” he said.

Chiu said Olivet has given the New Refuge congregation about 30 days to move out of the building.

Another factor influencing the timetable for opening, he said, is the Covid-19 pandemic and local restrictions on public gatherings. “We will follow all protocols as required,” he said. 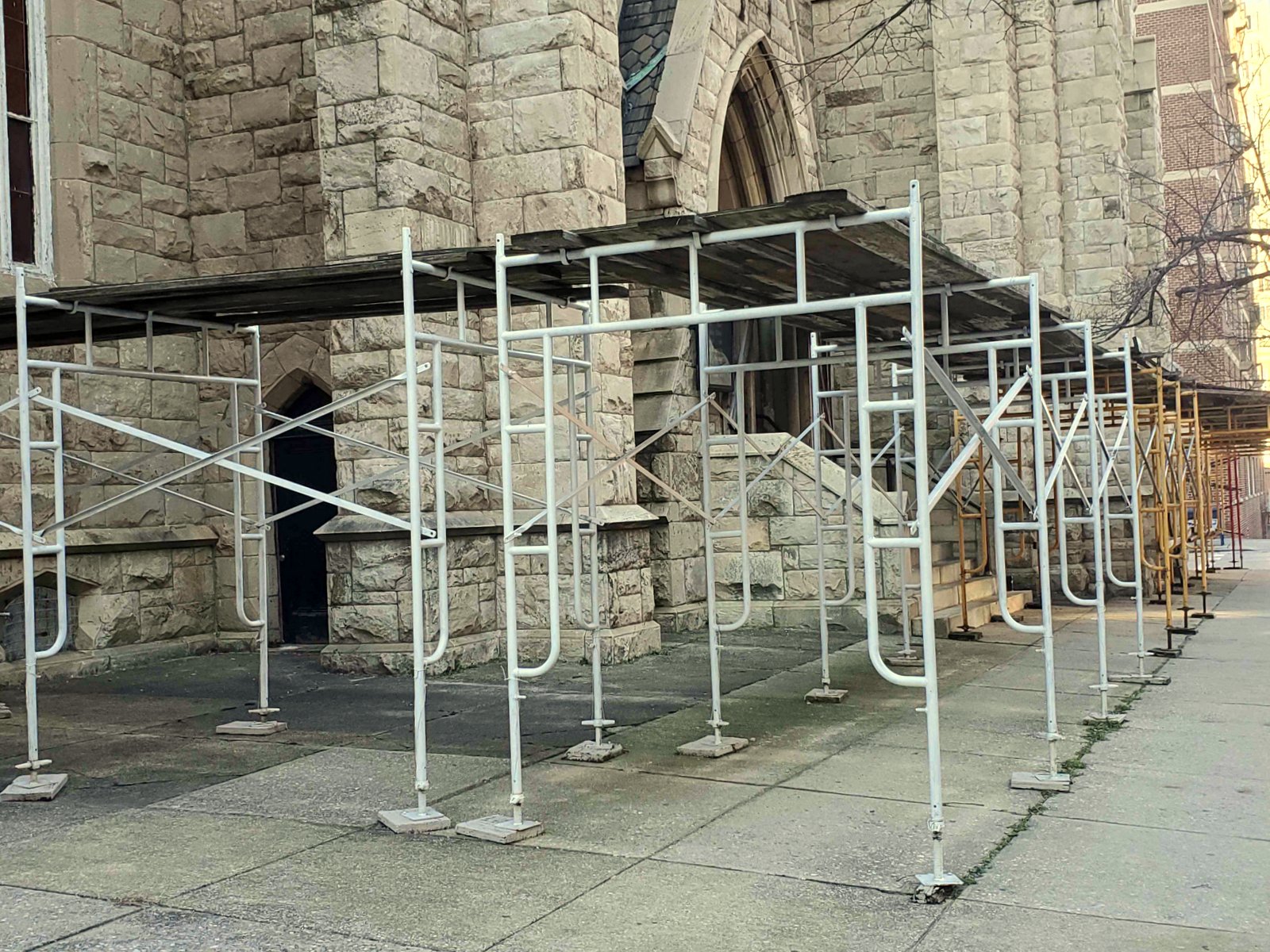 The scaffolding has protected pedestrians from falling tiles and other debris for nearly a decade. (Ed Gunts)

As The Brew first reported, New Refuge sold the building at 1110 St. Paul Street at the prodding of city officials, who agreed to forgive certain fines if church leaders would put the building up for sale.

A. J. Billig & Co. Auctioneers represented the seller. The sale price of $550,000 – less than some nearby rowhouses are bringing – reflected the need for repairs.

Chiu said his expectation is that people will see signs of exterior repair work underway during the first half of 2021, and he is hopeful that all scaffolding will come down “within the year,” signaling that exterior renovations are complete.

He said he doesn’t have an estimate for how much the work will cost, but Olivet is consulting with architects and contractors now to get estimates. He didn’t know if there’s a working bell in the tower

The cost of repairing the building will likely be in the “thousands” rather than the “millions,” estimates the church’s general secretary.

Parts of the 150-year-old building that need the most work are the sloping slate roof, which has falling tiles, and the bell tower and spire, according to Chiu.

He said he believes the cost of repairs will likely be in the “thousands” rather than the “millions,” in part because Olivet intends to keep the interior intact.

He cited Olivet’s recent renovation of the historic Immanuel Community Church in The Bronx, also 150-years-old, as an example of the quality work it does on historic buildings.

Representatives of Baltimore’s Commission for Historical and Architectural Preservation (CHAP) and Mount Vernon Belvedere Association said they knew the building was for sale, but haven’t been in contact with the buyers and would like to learn more about their plans.

Chiu said Olivet is an evangelical ministry with Presbyterian roots. He said Olivet wanted to come to Baltimore because it’s one of the few large American cities where it doesn’t currently have a presence.

“From our perspective, it’s also a city that can benefit from the ministry of God’s word. Obviously, our mission is to spread the gospel, and for us Baltimore is a very important location for that work.” 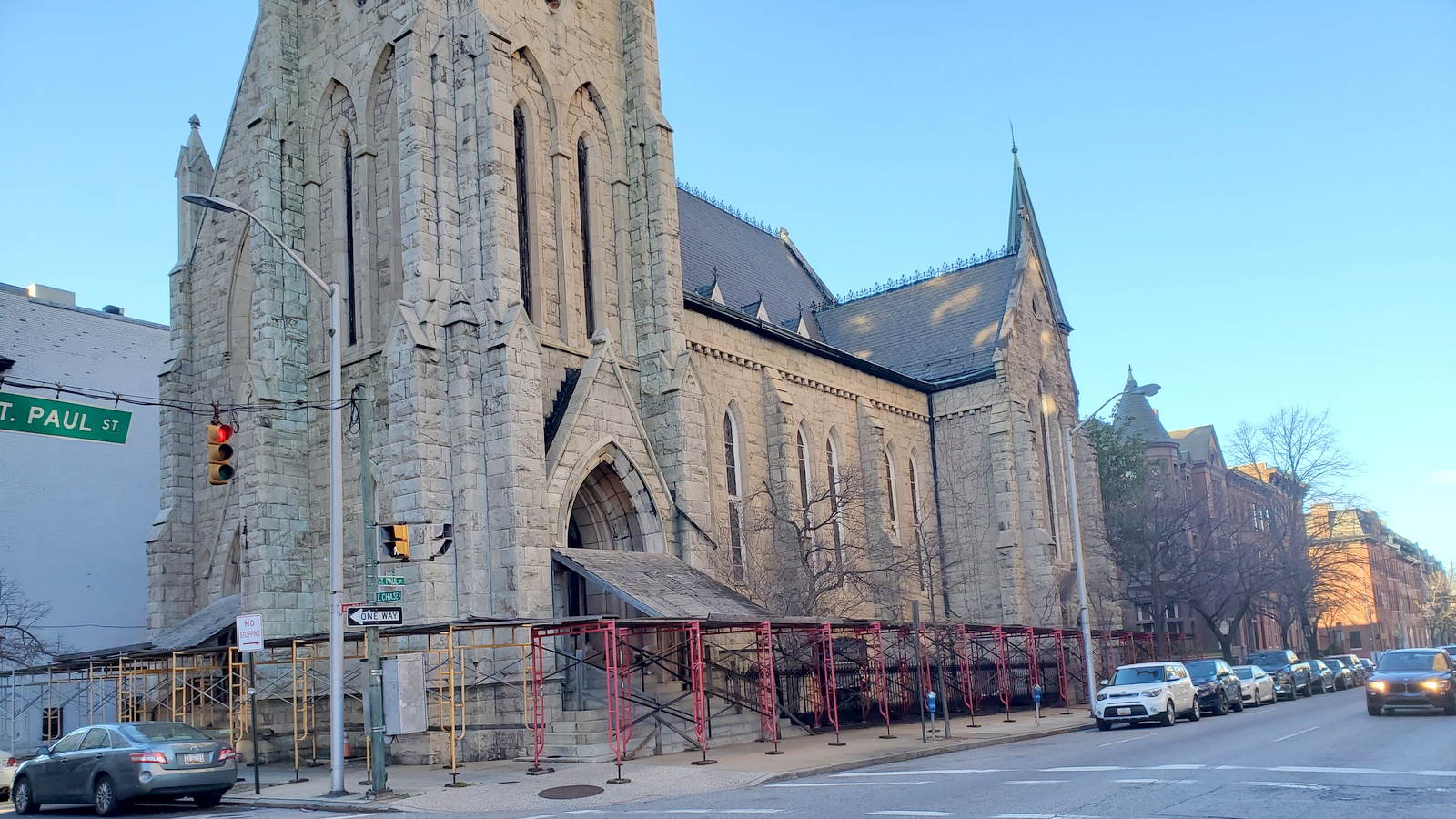 The historic church at St. Paul and Chase streets was purchased by Olivet Assembly USA, which plans to name it New Life Evangelical Church. (Ed Gunts)

He said Olivet was attracted to the building because of its location and its distinctive architecture, the work of Bruce Price and E. Francis Baldwin. Olivet also wanted to preserve an important religious structure for continued use as a church.

“This was built by God’s people,” he said. “This has been used as a church for a long time. We hope that it can stay that way. It has very significant religious value.”

Chiu said Olivet has a thriving youth ministry and hopes to appeal to young people in the Baltimore area, including students of local colleges and universities such as Johns Hopkins. He said the Olivet congregation closest to Baltimore at present is Bethel Presbyterian Church in Washington, D.C.

Chiu said he doesn’t see the lack of off-street parking as a serious drawback because many of the worshippers are likely to be part of a “walk-in crowd” coming from the immediate area or using public transportation. Services are also going to be livestreamed.

“We will definitely be broadcasting from there, whether there is on-site attendance or not,” he said.

We’re not in any way legally tied to Olivet University, says the general secretary.

Chiu said the Olivet Assembly USA is separate from Olivet University, an organization that made headlines last year for pleading guilty to its role in an embezzlement scheme involving the use of real estate for money laundering in New York.

Chiu disputed reports tracing the ministry’s relationship with the university, saying, “We’re not in any way tied to them legally.”

He said the minister of New Life Evangelical Church will be Samuel Kim, who has been the senior pastor at Bethel Presbyterian in Washington.