James Haisler needed a Covid-19 test in order to start the job he had just landed in a manufacturing plant.

Maria Guttierrez, Alfredo Lara and Maria Lineres needed testing too – it was a requirement to keep their jobs at Baltimore’s busy Lexington Market during the pandemic.

And as for the woman who declined to give her name, she was worried she might have been infected by a Covid-positive co-worker.

“I haven’t had any symptoms, but I just wanted to be sure,” she said, before driving off.

All five of these people showed up this morning at the Zeta Center in Park Heights to take advantage of the Covid testing the Baltimore City Health Department offers on Tuesdays and Thursdays.

But today the building was closed.

“I called 311 and they gave me a city number, connecting me to the Health Department, and they said I could come here,” Haisler explained, standing outside his car, looking perplexed.

The other four had called 311 and had the same experience, including Gutierrez, who showed a reporter the web page she had relied on before driving over.

When they arrived at the center, instead of public health workers with Covid tests, they encountered City Councilman Isaac “Yitzy” Schleifer with a cellphone, which he was using to post about the situation on Facebook Live.

Last night, citing “inclement weather,” the Health Department announced online that it had decided to close this testing site in Northwest Baltimore the next day.

Schleifer said a constituent had called to alert him to the cancellation and the fact that testing had not been halted at the city’s Convention Center site.

Seeing no rain or freezing temperatures in the next day’s Baltimore forecast, the 5th District councilman was not pleased.

“Someone felt the weather in Park Heights was going to be different here from downtown,” he said, describing the scene for viewers, how “car after car” had rolled up to the dry, clear parking lot, under sunny blue skies, only to leave in frustration.

“With testing, it’s great to set it up, but it’s worthless if it’s not managed right,” he fumed.

After unloading about the situation on social media, Schleifer spoke with each of the people who had arrived, explaining where they could go for a test – either south to downtown Baltimore or north to Baltimore County. 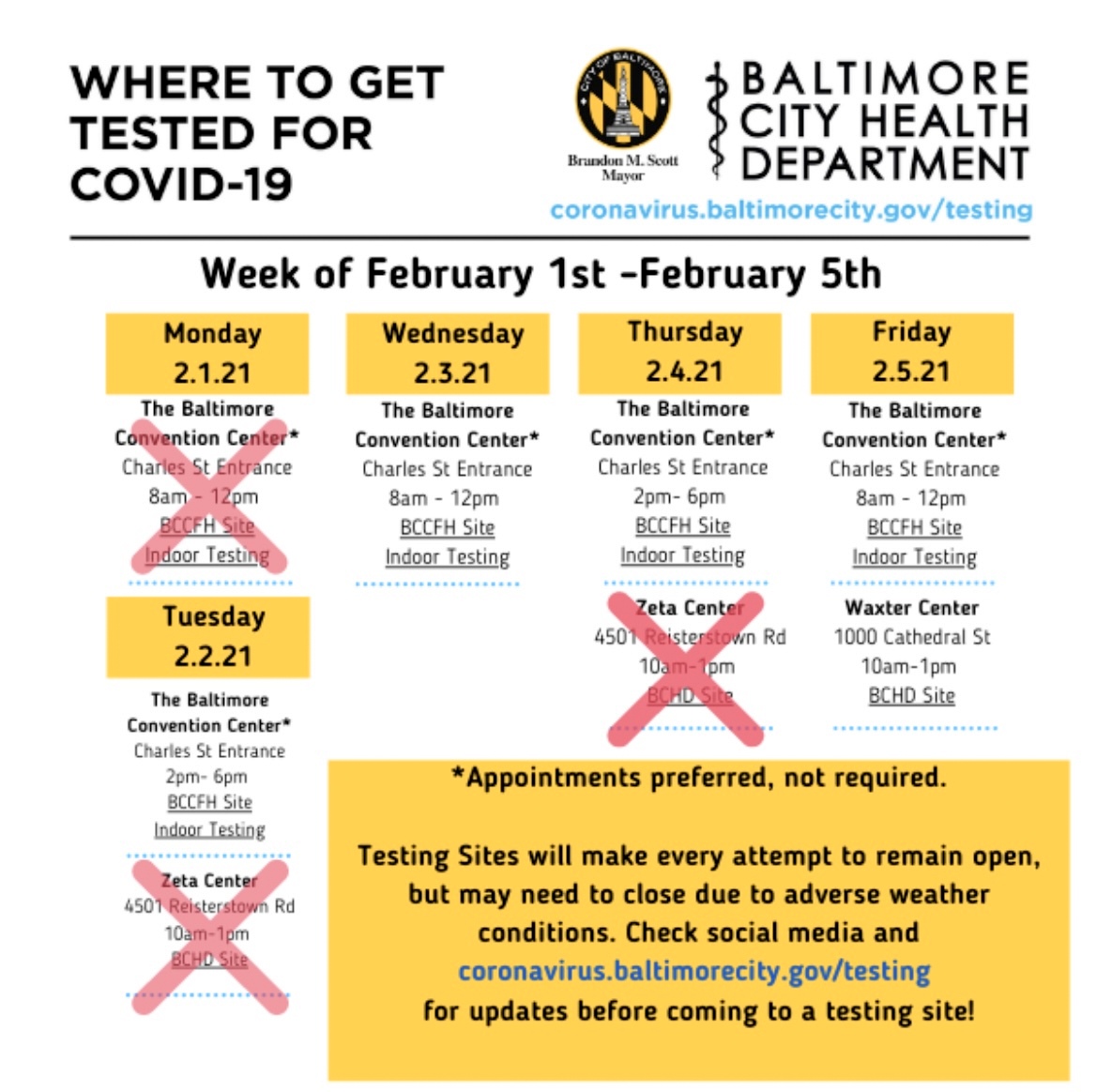 City Health Department web page indicates testing in this Northwest Baltimore location was to be canceled on 2/4/21. (@BMore_Healthy)

Asked about the decision to close the Zeta Center site today, officials said they did feel the weather conditions there would be different and problematic.

“After conducting a site visit Wednesday afternoon, and witnessing icy conditions on the ground of the parking lot of the Zeta Center, and after reviewing meteorological reports of below freezing Thursday morning temperatures, our team decided to postpone testing today in consideration of potential safety challenges that might be created by the weather,” Health Department Spokesman Adam Abadir said in an emailed statement.

“Testing at the Zeta Center, one of our ‘mobile’ testing sites, involves having residents waiting in line outside to receive a test, while testing and lines at the Convention Center are mostly indoors,” Abadir continued.

He added that “all of the Health Department’s mobile testing sites, as noted on our website and social media accounts, are weather dependent for this reason.”

As for people being misdirected by 311 and his own agency to a closed test site, Abadir didn’t have an answer today.

“We are working with our team to determine where and how this miscommunication may have occurred, to ensure that this does not happen moving forward,” he said. 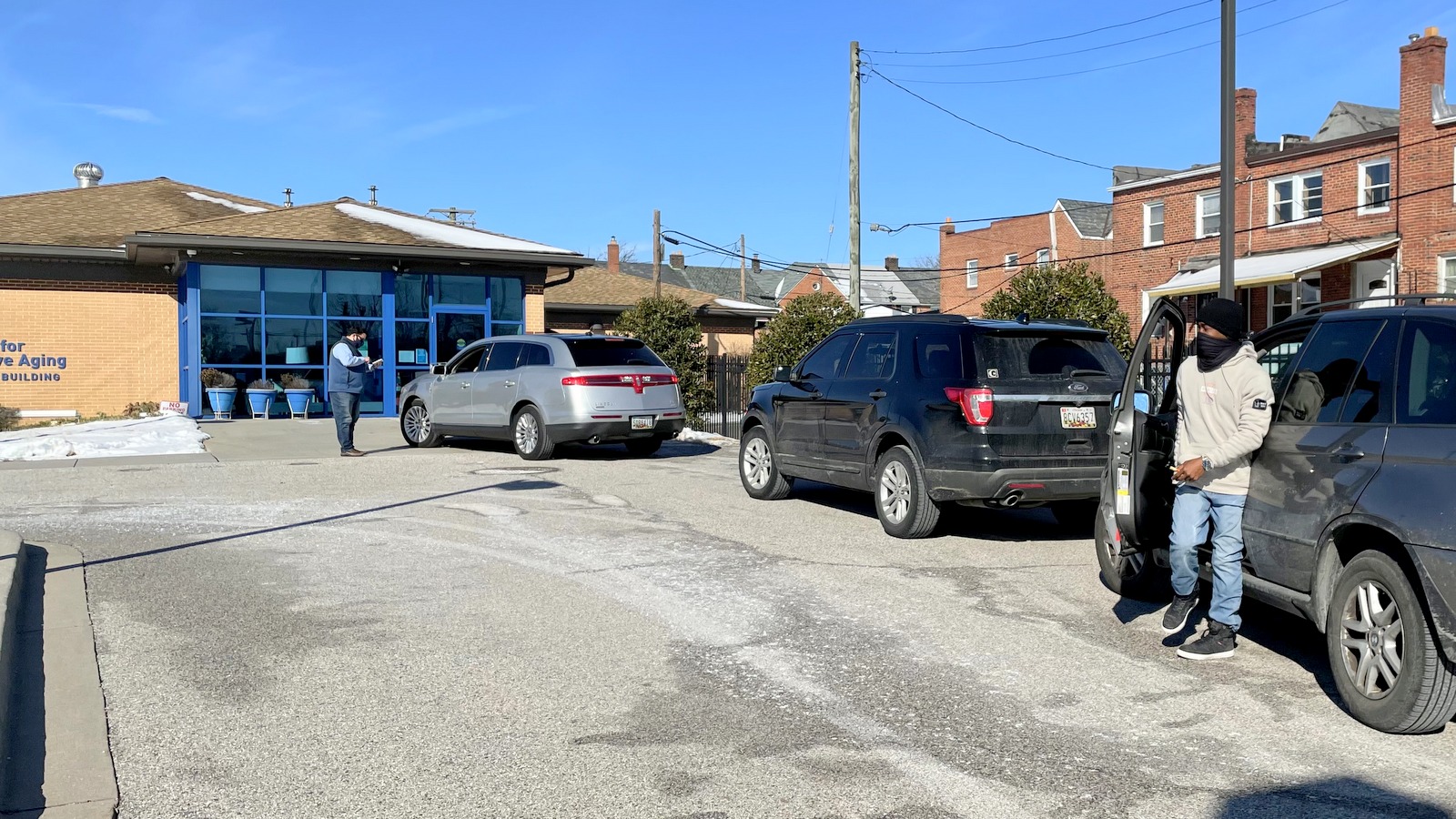 At the Zeta Center, Councilman Yitzy Schleifer (left) talks to people who arrived hoping to get Covid testing. (fern Shen)

Schleifer has been vocal about  his frustration with systemic failures he sees in the city’s testing and vaccination programs. He said earlier this week that dozens of constituents complained to him about having appointments to receive the vaccine, only to be turned away.

City health officials said “overbooking” was the reason why people coming to the Baltimore City Community College were unable to get their scheduled shots.

According to Schleifer, today isn’t the first day the city has suspended testing at the Zeta Center site, at 4501 Reisterstown Road.

“These are issues of equity,” he said, noting that his 21215 zip code remains one of the city’s Covid hotspots, with many residents who are seniors, essential workers and people with health conditions.

“When we see that there is testing available at other locations and see there’s vaccines available and being passed through to other locations, it’s time to stop picking winners and loser,” the councilman said.

“We need to see that these sites are manned and operated and we need to stop making bogus excuses like blaming the weather.”