An out-of-state company has emerged as the potential developer of the Overlook at Roland Park property, with plans for a building that’s half as tall as the much-maligned one proposed by the current owner.

Claiborne Senior Living, a Mississippi-based operator of assisted living and memory care facilities, is seeking to erect its first development in Maryland on the hilly 12-acre parcel near the intersection of Falls Road and Northern Parkway.

Preliminary plans call for a three-story complex that would house about 110 residents and 50 parking spaces.

That’s smaller than The Overlook at Roland Park, the $40 million, 148-unit development proposed to have four levels of apartments over two levels of parking.

A sketch of “The Claiborne at Roland Park,” an assisted living facility that would replace the Overlook project that developer Jonathan Ehrenfeld is abandoning. (Claiborne Senior Living)

The seller is Blue Ocean, a real estate investment firm whose CEO, Jonathan Ehrenfeld, had secured City Council approval in 2017 to build The Overlook despite widespread community opposition.

Residents contested the Council’s action, and the project has been mired in court proceedings ever since.

Blue Ocean had bought the 10-story, sixties-era Belvedere Towers for $30.2 million in 2016 and renovated it inside and out, renaming it The Falls at Roland Park and adding graphic art on the building’s south facade.

• In Overlook reversal, judge takes a hard look at city agencies and the politicians who approved it (12/26/19)

Five neighborhood groups near the site are planning to hold an informational meeting with Claiborne representatives next week to hear about the company’s plans.

“As you may know, Blue Ocean has the Overlook site under contract to Claiborne Senior Living,” Bob Williams, president of the Lehr Stream Neighborhood Association, wrote in a message announcing the meeting to his neighbors.

“Claiborne proposes to build a senior living facility with 80 assisted living and 30 memory care units on the Overlook footprint. Claiborne’s building would be significantly lower in height and have fewer units and parking spaces” than the Overlook project, Williams said.

The project needs a variance from the city’s zoning board because assisted living is a conditional use under the current zoning for the property. In addition, the proposed building would rise more than 60 feet above Northern Parkway, counting the hill it would be on, and would need a height variance as well.

“It’s a meaningful change from what Blue Ocean proposed, so people are excited to hear about it”  – Doug Schmidt.

Developers typically seek community support when they apply for a zoning variance. The five community groups have not taken a position on Claiborne’s proposal.

Doug Schmidt, president of the NRPIA and a principal of Workshop Development in Baltimore, said next week’s virtual presentation will give area residents a chance to decide whether to support the project when the developer seeks approvals from the city, as the new owner of The Village of Cross Keys did.

“We are giving Claiborne the opportunity to present it to the broader neighborhood, and then we look forward to hearing feedback from the neighborhood,” Schmidt said. “It’s a meaningful change from what Blue Ocean proposed, so people are excited to hear about it.”

“It’s clearly a very different conception than what was presented in the past,” said Robert Connors, president of the Roland Park Civic League. 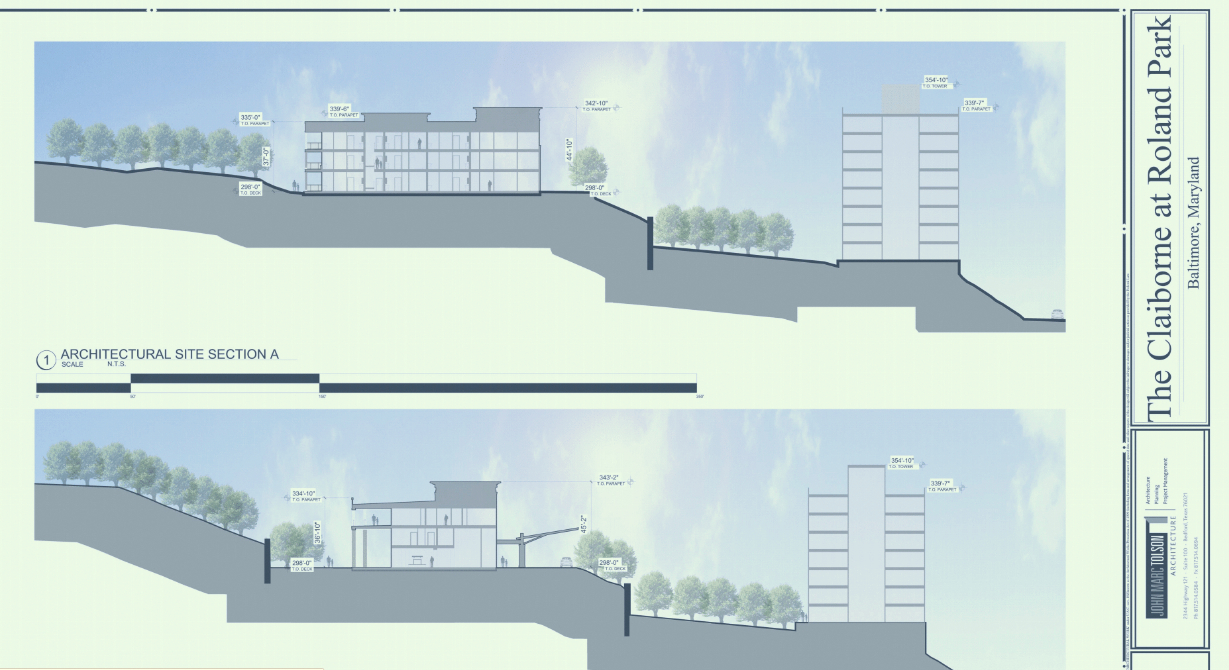 The proposed care facility would be about equal in height to The Falls at Roland Park, the 10-story apartment building that towers above the Sabina-Mattfeldt neighborhood in the Jones Falls Valley. (Claiborne Senior Living, Mark Reutter) 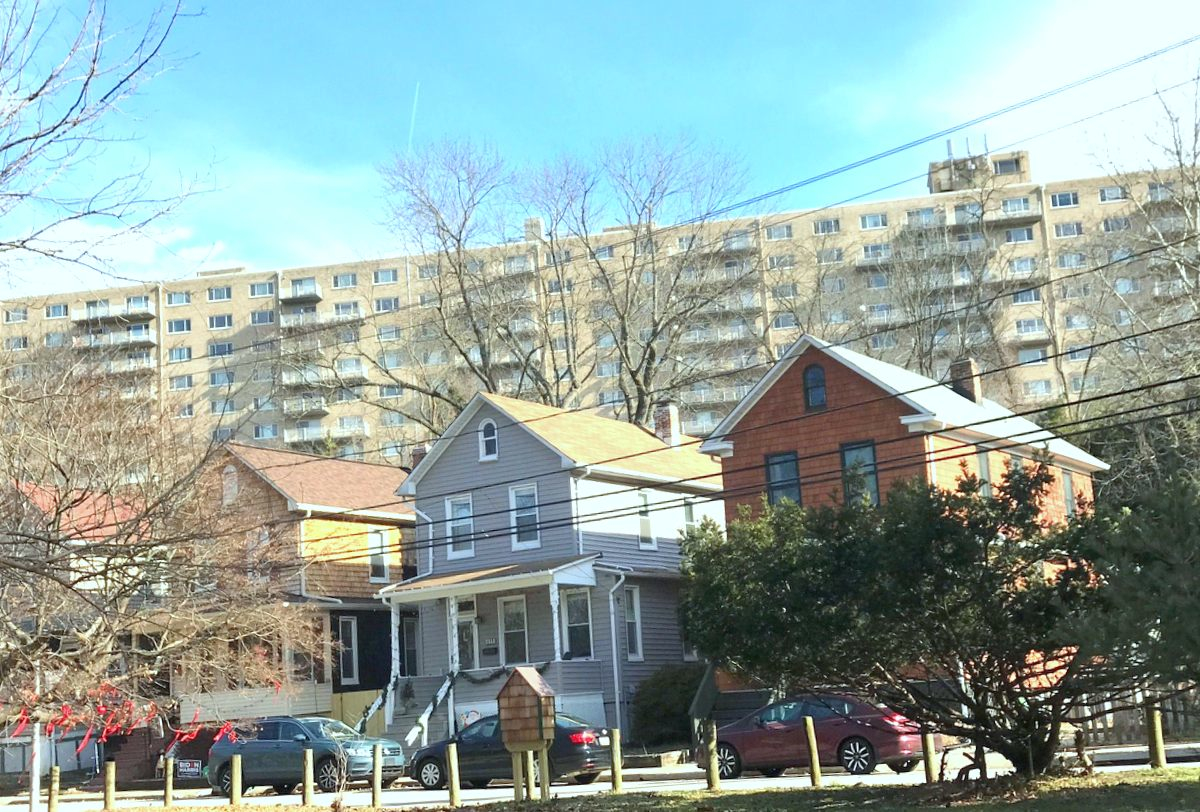 The Overlook proposal drew opposition in part because Falls Road and Northern Parkway is considered an auto-oversaturated failing intersection, and area residents were afraid another 148 apartments would add to the traffic congestion.

Many of the residents at the proposed assisted living development would not drive, and those who do drive would not go in and out very much.

Claiborne’s plans indicate that its development would have just one way in, from Northern Parkway, and there are no other roads planned either for construction or upon completion. Blue Ocean had proposed entrances and exits from both Northern Parkway and Falls Road.

Andy Niazy, chair of the land use and zoning committee for the Roland Park Civic League, said Claiborne is proposing a surface parking lot rather than the structured parking proposed for The Overlook. He said Claiborne estimates that 85% of its residents won’t drive and most of its 50 employees spread over three shifts will use public transportation to get to work.

The proposed building would be about 63 feet above Northern Parkway, compared to Blue Ocean’s plan for a building rising 89 feet, and the residences will be single rooms rather than apartments. Although it will be about the same height as The Falls at Roland Park, “it’s roughly 25 to 30 feet shorter than the last building,” Niazy said.

Claiborne is also willing to sign a memorandum of understanding with the neighborhoods stipulating that it won’t develop six acres of the site it would be acquiring from Blue Ocean, Niazy added.

John Marc Tolson Architecture of Bedford, Texas, is the architect.

Claiborne representatives did not respond to requests for information. According to its website, Claiborne is a family-owned company that offers a “luxury retirement lifestyle.” Its website lists 11 developments in four states: Georgia, Louisiana, South Carolina and Mississippi.

In challenging Blue Ocean’s Overlook project, community residents argued that the land is governed by zoning restrictions that permit buildings to rise no more than 35 feet, and that Baltimore’s Planning Commission and City Council acted improperly in approving plans for a building that would rise 89 feet.

Three different parties filed suit to have the approval vacated, and the case is currently before Maryland’s Court of Special Appeals.

It’s one of several recent challenges to decisions made by the city’s Planning Commission under former mayors Catherine Pugh and Bernard C. “Jack” Young, with other challenges coming from residents of Woodberry and Mount Vernon.

He and his companies have held fundraisers for Northwest Councilman Isaac “Yitzy” Schleifer and 41st District Delegate Dalya Attar as well as contributed to Baltimore’s last four mayors, including $1,000 to Brandon Scott after he won the Democratic Party mayoral primary.

An attorney for Blue Ocean did not respond to a request for information about the pending sale.

Niazy said Claiborne has a 30-day “due diligence” period to study the site, meet with area residents and decide whether to proceed with its project.

• Mark Reutter contributed to this article.