Maryland law prohibits officeholders from using their campaign funds to pay for personal legal expenses, but The Brew has found a second instance where Baltimore State’s Attorney Marilyn J. Mosby apparently did just that.

Mosby’s campaign committee confirmed last month a Brew report that it had paid $3,250 to two attorneys to represent her in an inspector general’s investigation of her travel and business activities.

The committee said on Facebook that Mosby had paid the lawyers with campaign funds because she thought “erroneous media reporting” was a “threat to her electoral viability” (her term lasts until January 2023).

The statement also said that Mosby had “ceased using campaign funds” for legal costs. But the fees paid to the two attorneys have not yet been returned to the campaign committee, according to State Elections Board records.

A review of prior reports revealed that her committee, Friends of Marilyn Mosby, paid $11,014.80 to the Washington law firm of Kellogg, Hansen, Todd, Figel & Frederick in December 2018.

The check disclosed as “legal fees – general” for the Mosby campaign. (State Board of Elections)

Eight months earlier, Mosby hired the same law firm to threaten legal action against a former city prosecutor who had had contacts with members of the Gun Task Trace Force.

Mosby and other state’s attorneys are represented by the Maryland attorney general in matters that arise from their official duties.

But Kellogg partner James M. Webster III said he was writing “on behalf of Marilyn Mosby, whom I represent in her personal capacity.”

The April 20, 2018 letter to former prosecutor Anna Mantegna had no apparent connection to Mosby’s campaign committee.

“Cease and desist from making any statement (or from directing anyone else to make such statements) that your termination was related to your supposed refusal to disclose information to Ms. Mosby or the Baltimore City State’s Attorney’s Office about an FBI investigation into the Mosby Administration,” it said, concluding:

“Should you make any false and defamatory statements about Ms. Mosby, she intends to pursue any and all appropriate remedies, including filing a lawsuit against you for defamation.” 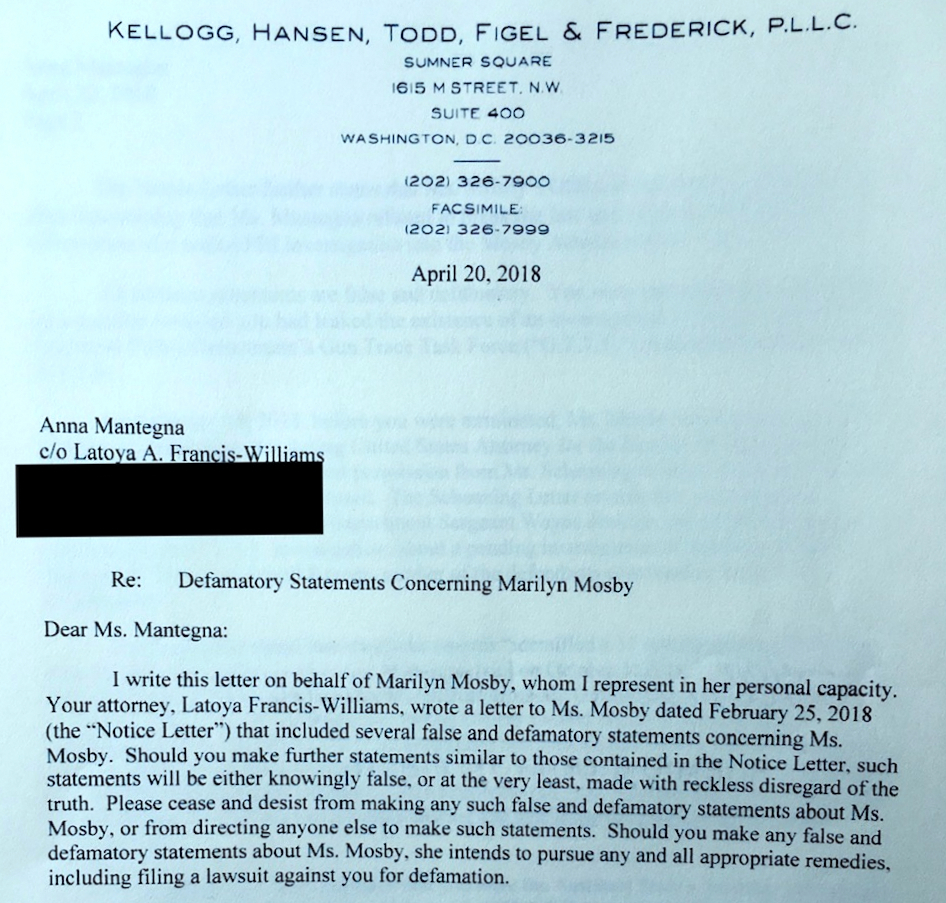 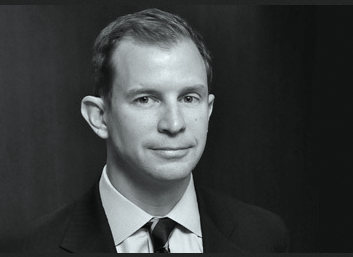 Silence from the SAO

The Brew asked Mosby to explain the legal work done by Webster, how it related to the campaign and to provide an invoice or billing receipt for the payment.

Unlike most elected officials, Mosby chairs her Friends committee, therefore is directly responsible to ensure that reports submitted to the State Elections Board “are complete and accurate. . . under penalty of perjury.”

Spokesperson Zy Richardson confirmed yesterday that Mosby had received the questions. Since then, the office has not responded to the questions or returned email and phone messages.

Mosby’s office has not responded to The Brew’s questions or returned email and phone messages.

The letter was related to a chain of events in which Mantegna had been suspected of being a possible source of a suspected leak regarding the federal investigation of the GTTF.

Then-acting U.S. Attorney for Maryland, Stephen Schenning, concluded that Mantegna was probably not the source of any leak and recommended that Mosby hear her side of the story.

Instead, Mantegna was fired in February 2018, and nearly a year later, on January 16, 2019, Friends of Marilyn Mosby disclosed that Kellogg had been paid the $11,000 for what it described as “legal fees – general” for the campaign.

“The letter was very intimidating. It was scary. Its intent was to silence me” – Anna Mantegna.

“Obviously, the letter was very intimidating. It was scary. Its intent was to silence me, to make sure I didn’t talk,” Mantegna told The Brew.

The Maryland Code (Chapter 33.13.10) bars the use of campaign funds for the personal costs of officeholders, including legal fees and expenses “related to the necessary and ordinary course of holding office.”

Gaines was sentenced to six months in prison and ordered to pay $22,565 in restitution.