A piece of Baltimore history is going up for sale – and an ambitious Westside redevelopment project appears to be going off the drawing board – with news that the former home of Martick’s Restaurant Francais is being auctioned off next month.

Alex Cooper Auctioneers has set April 8 at 11 a.m. as the time it will sell the property to the highest bidder, as the Baltimore Business Journal reported last week.

The Martick’s building at 214 West Mulberry Street is being sold as part of a group of seven adjacent properties that were targeted to become a mixed use development called 400 Park Avenue.

The auction is a sign that the $30 million project planned for the site has not been funded and will not move ahead under the current owners after years of planning and partial site clearance.

There had also been controversy.

Under pressure to save the former Martick’s, remebered by many as an oasis of bohemian culture and French cuisine, developer Chris Janian had agreed to incorporate the front part of the pre-Civil War structure into the planned multi-story building.

He also promised to make the development, located in Baltimore’s small, struggling Chinatown, a hub of Asian culture and cuisine.

“We envision a food, event and nightlife-focused street along Park Avenue and down Mulberry that pays homage to its historic Chinatown roots,” Janian, principal of Vitruvius Co., told the Commission for Historical and Architectural Preservation (CHAP) in 2019. 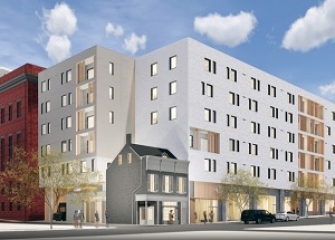 Most recent iteration of plan to incorporate the Martick’s Restaurant Francais into a new development. (Vitruvius)

City officials had trumpeted the project as a game changer for the struggling neighborhood.

Plans called for 94 apartments and 5,000 square feet of street level commercial space, with the front portion of the Martick’s building incorporated into the larger development.

City officials had trumpeted the project as a game changer for a struggling neighborhood.

Most of the land was assembled by the Baltimore Development Corporation, which sought proposals and selected a group called Park Avenue Partners to be the developer. The Martick’s building was not part of the BDC offering.

The upcoming auction is a substitute trustees’ sale, triggered after Park Avenue Partners defaulted on a loan from a private lender, represented by the Law Office of Hunter C. Piel, according to the auctioneer and legal documents on its website.

Martick’s is significant because it is one of the few buildings in the area that dates from before the Civil War and retains original detail and because it was associated for much of the 20th century with the Martick family, which used it as a tavern, jazz spot and restaurant.

From 1970 to 2008, the late Morris Martick operated it as Martick’s Restaurant Francais, one of the first places in Baltimore that served French cuisine. The filmmaker John Waters has credited it as a spot that introduced him to Bohemian culture when he was young. 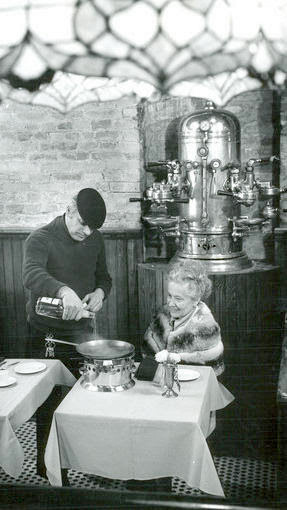 Morris Martick flambes a dish for a patron. (Family photo)

According to auctioneer Paul Cooper, the seven properties will be sold as an entirety, not individually. Interested parties must make a deposit of $50,000 in order to bid, and there will be no online bidding.

The site is part of the Howard Street Commercial Historic District, which means any plans for redevelopment need CHAP approval.

When reviewing Park Avenue Partners’ plans, CHAP determined that the Martick’s structure was a “contributing building” in the historic district and required that at least the front third of it be preserved as part of the larger development.

Janian, a member of Park Avenue Partners, is also part of a team that the BDC selected to develop a group of buildings at Howard and Lexington Streets in the city’s Market Center historic district, including the former Read’s drug store.

Sale of the Market Center properties, long referred to as The Superblock, to the group for $4.5 million was approved by the Board of Estimates last year.

Renderings for The Compass, as the project is now being called, show a massive mixed-use development rising from an area that was once a thriving commercial district but is now a largely-vacant eyesore.

The area has been the focus of repeated failed redevelopment plans dating back to Martin O’Malley administration.

The other developers for The Compass are Jon Pannoni and George Watson of Landmark Partners. Pittsburgh-based Partnered and the local Mayson-Dixon Companies are minority partners in the venture.

Plans for that project have not yet been reviewed in public by CHAP.