It’s that time of year when temperatures warm, the slush and road salt is washed away and Baltimore city streets are left exposed in all their poorly patched and raggedy glory.

At least a third of the city’s streets are so cracked, weathered or rutted they are considered substandard, according to the engineering consultant firm, Amec Foster Wheeler. When asked to rate the quality of street maintenance in Baltimore, only 26% of residents said the roads are “good” or “excellent.”

Only about 2% of Baltimore City’s 4,300 miles of roads are resurfaced each year.

The city needs to pave at five times that rate to keep up with the deterioration of its streets, according to the budget office. Yet city crews are resurfacing significantly fewer total miles than they did a decade ago.

With $600 million slated to come to Baltimore under the massive Covid-19 relief bill just passed by Congress, fixing Baltimore’s roads, especially in disinvested neighborhoods, should be a priority for Mayor Brandon Scott, who pledges to bring both efficiency and equity to city government.

Shocks to the System

One can deduce the status of city streets from various reports, but, like those residents in the surveys, I’ve long had my own seat-of-the-pants estimate of the problem.

Before the pandemic, when I was still commuting downtown on the bus, I knew to brace myself or even stand up on certain blocks where the road was so gutted the bus would rattle every bone and nerve in my body. And when riding my bike, I know to raise my backside from the seat for long stretches of Druid Park Drive and other city streets.

City crews are repaving significantly fewer total miles than they did a decade ago.

Baltimore gets substantial financial help from state and federal funds. But city government is responsible for the maintenance of all its streets, both local and state roadways, with the exception of interstates such as I-95.

The job falls to city milling and paving crews, a team of about 50 laborers, heavy equipment operators and supervisors who work spring through fall. Typically, more complicated repair projects are contracted out to private pavers such as P. Flanigan & Sons and M. Luis Construction. 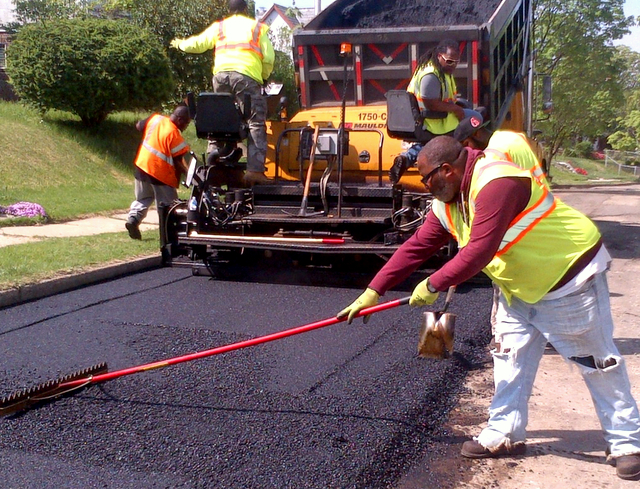 The city needs to resurface at five times its current rate to adequately maintain its roadway infrastructure. (Baltimore DOT)

Covid-19 slowed the city’s repaving efforts, and crews should be credited for risking their health to work at all.

But the problems pre-dated the pandemic. The total miles repaved, both in-house by Department of Transportation (DOT) crews and by contractors, were 108 miles in fiscal 2019, according to DOT spokeswoman Kathy Dominick.

That’s almost half of what it was in 2010, according to city records. Total miles repaved since that time have declined.

Baltimore needs to repave 400 miles of roads a year to keep pace with the projected life span of street surfaces, according to an examination by the Bureau of the Budget and Management Research (BBMR).

Dominick said heavy rainfalls hampered repaving in the two years before the pandemic. She said DOT also purchased new equipment to replace “all of our outdated and broken equipment,” including a new milling machine, new paving boxes and rollers and 10 new dump trucks used for various street maintenance operations.

“The new equipment has helped redefine our operations and will help us work at maximum capacity,” she said. Other improvements in scheduling and technical manuals should help.

Money is also an issue, of course. Baltimore and other municipalities have long lamented a drop-off in state Highway User Revenue (HUR) after the Great Recession of 2008. That funding has been rising steadily, if slowly, for a decade.

That HUR money is carved up for multiple needs in our blighted city.  The city spends twice the amount of its HUR money on cleaning up illegal dumping ($16 million) as it does on milling and paving. Impounding and disposing of abandoned cars consumes another $8 million in HUR funding.

The alleys behind our homes get more funding than the streets in front.

To make matters worse, resurfacing is in a budget competition with pothole repair. After the winter thaw, these craters multiply. For years, the city and its performance audits have emphasized the urgency of filling potholes within 48 hours.

But filling a pothole with shovels of hot asphalt is different than resurfacing.

The former is a band-aid. You can see these dark mounds on streets all over the city. Resurfacing is a more permanent solution. Crews use machines to mill off the deteriorated surface of an entire roadway, then repave and pack down the new road.

And here’s the rub. Dominick said the city doesn’t have an exact figure for spending on pothole repair. Yet the money comes out of the same “milling and paving” line item as resurfacing, she said.

Which raises the question: Is permanent road repair being sacrificed to the urgency of potholes repair and placating 311 callers? 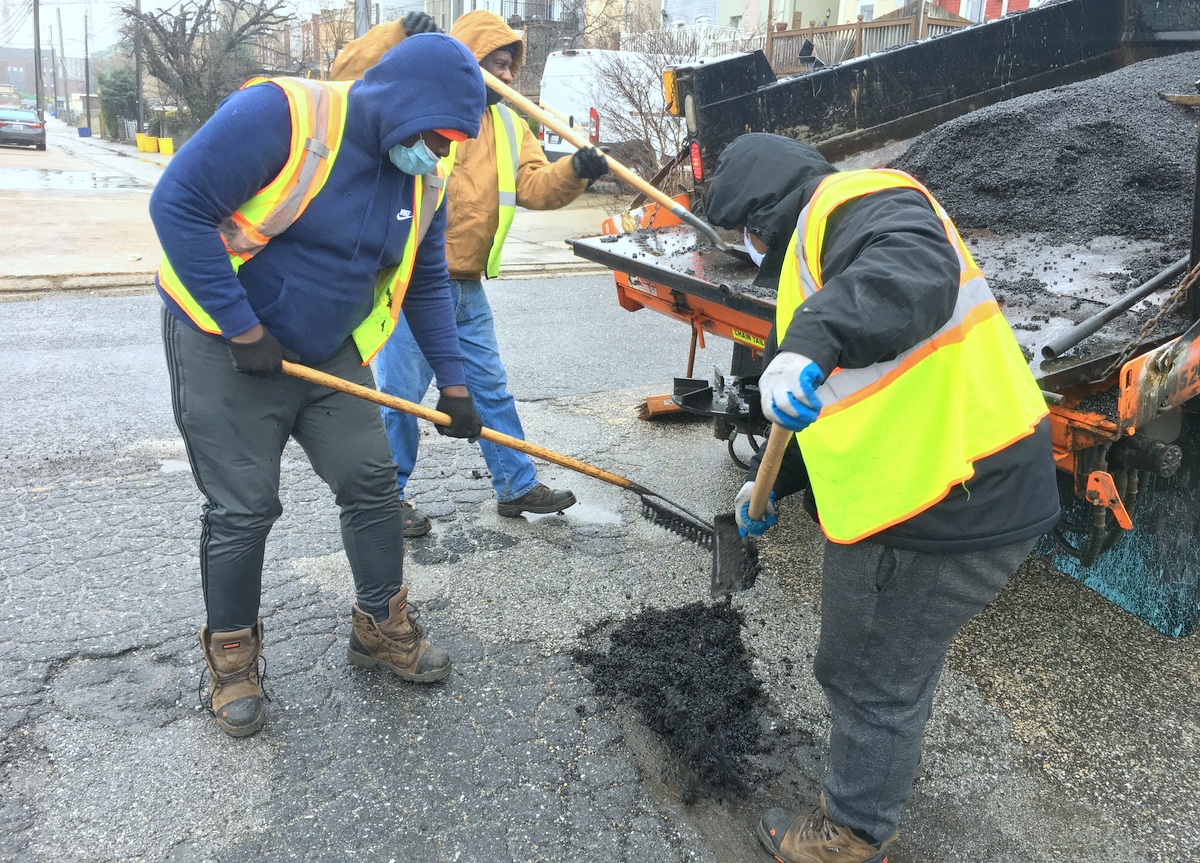 Baltimore has prioritized patching over repaving and spends about as much handling abandoned vehicles as it does resurfacing roads. (Tom Zolper)

Perhaps the first step toward improved road repair would be improved transparency.

It worked once before. In 2004, the total miles of roads resurfaced was abysmally low. Under Mayor Sheila Dixon, “Operation Orange Cone” was initiated to allow residents to see “how much repaving was being done with their tax money” and to spur an increase in paving miles.

Results were dramatic. The total of road miles resurfaced each year grew steadily, to a high of 212 miles in 2008.

But Operation Orange Cone has since become as disappointing and disorganized as street resurfacing progress.

On the DOT website you can find the latest Orange Cone interactive maps. They purport to track road crews’ progress through 2020 and 2019. But the information is outdated and grossly incomplete, and the graphics are perplexing and useless for making any judgment. 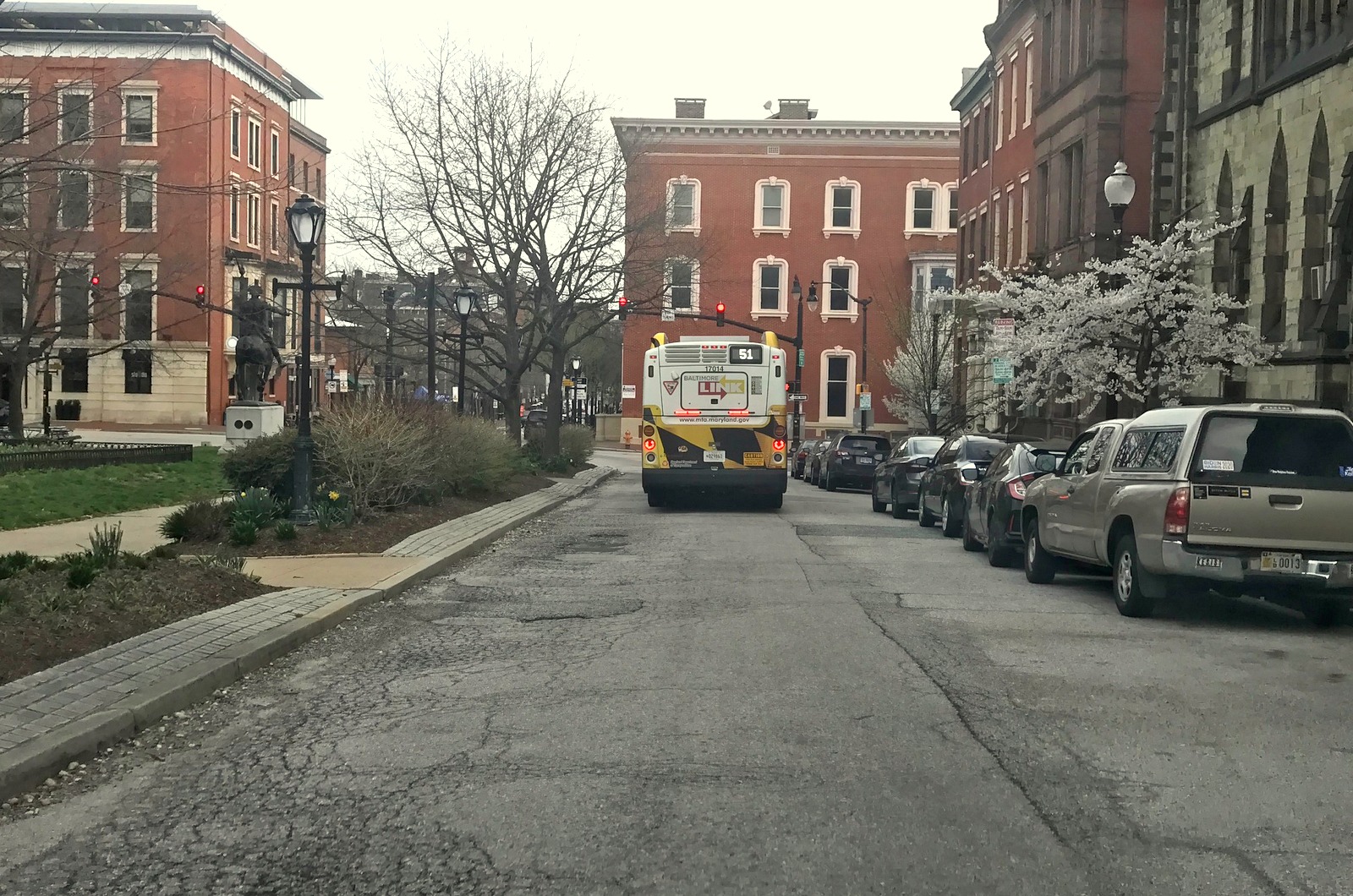 Patched and crumbling pavement in the historic 700 block of Washington Place in Mount Vernon. (Mark Reutter)

Certainly, Baltimore has more serious problems than the comfort of my bus or bike ride. But the terrible condition of its streets not only reflects poorly on city government – it punctures tires and wrecks suspensions and axles.

Bad roads victimize the many residents who, in a city with suboptimal mass transit, depend on cars and buses to get around.

And for those who ride bikes – a transportation mode the city ought to be encouraging – cracked concrete and pulverized pavement pose serious safety hazards.

Hopefully, the windfall coming from Washington will be matched by the skill and dedication of Mayor Scott and his new team, led by City Administrator Chris Shorter, to drive DOT to better performance.

Demonstrating that City Hall can improve everyday life is an essential step to getting Baltimore back on the road to economic and social recovery.

• Tom Zolper is a former senior writer for the Chesapeake Bay Foundation and for Catholic Relief Services. This is his first Brew byline.