A debit card program designed to help Baltimore families impacted by Covid buy groceries and other necessities appears to be working as planned.

The program, which is underwritten by Baltimore Children and Youth Fund (BCYF) proceeds, anticipates supplying 15,000 people with cards on a first-come, first-serve basis.

The focus is on residents not covered by traditional government assistance programs, with preference given to those who live in zip codes with high rates of Covid-19 and food insecurity.

About 134,000 people live in low-income households in Baltimore, according to the American Community Survey. So while the program will benefit only a fraction of this pool, “it’s reaching the hard-to-reach resident it was designed to reach,” says Molly Rath, spokesperson for the Mayor’s Office of Children & Family Success.

She cites statistics showing that the average income of card recipients is $8,543.

Two thirds of the cardholders report being unemployed, 58% do not receive unemployment benefits or federal relief, and 20% say Spanish is their primary language.

But the one group not reached in significant numbers is the group that BCYF funds were originally earmarked for – teenagers and young adults.

So far, only 24% of applicants are under the age of 30, Rath said, even though city residents as young as 16 are eligible to receive cards (and even younger if they are not in the physical custody of a parent or guardian).

Last April, when the City Council and then-Mayor Bernard C. “Jack” Young agreed to divert $9 million in BYCF funds for Covid-related uses, then-Councilwoman Mary Pat Clarke said she was  assured that “every penny of that money” would go children and youth services.

It would be “for tablets for the children, for meals if the money runs out. . . It would be for children and youth, and it would be a public process that everybody could see,” Clarke said. (Start at 1:12:50.)

City Schools got $3 million to help buy Chromebooks for public school students, while the remaining $6 million went for a food access strategy under preparation by the Office of Children & Family Success.

The debit card program grew out of the food access  strategy.

An agreement, approved last September by the Board of Estimates and the Open Society Institute (OSI) Baltimore, opened the card program to “under-resourced” persons regardless of whether or not they had dependent children, stating:

OSI chipped in $330,000 to pay for consultants and the program’s administrative costs, while the Annie E. Casey Foundation agreed to kick in $40,000 to support the community-based organizations. 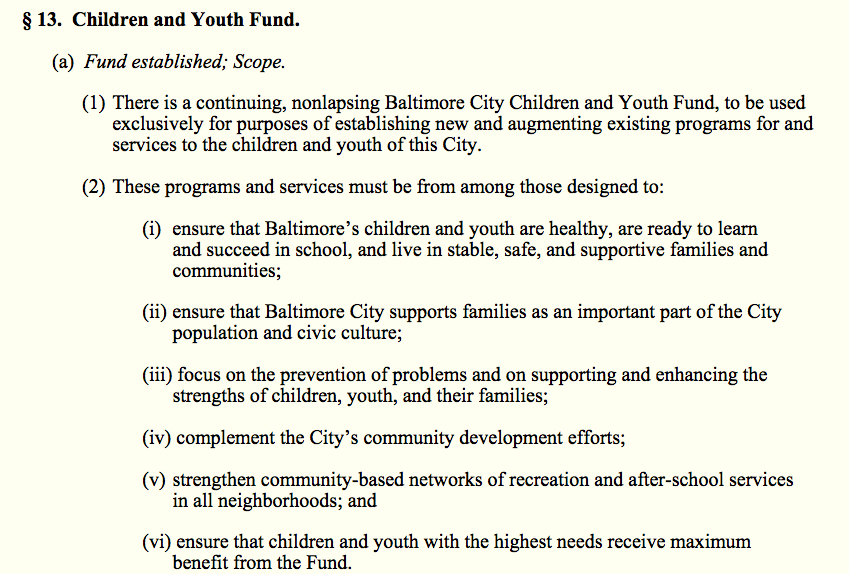 Cash assistance for needy adults was not one of the uses set forth in the Charter amendment approved by Baltimore voters in 2016. (Baltimore City Charter, Article 1, Section 13)

After multiple “technical” delays that stretched across six months, the debit card program got underway on March 1.

• Given a set number of “codes” to distribute, the groups certify that an applicant is experiencing financial hardships due to the pandemic and has limited income (up to $23,606 for a single-member household; $48,470 or less for a family of four).

• Eligible applicants receive a code and go online to complete their application. Another nonprofit, Baltimore’s Promise, reviews the applications and conducts “fraud checks.” (So far, 49 applications have been rejected as duplicates; none for fraud.)

• Upon Baltimore’s Promise’s approval, Texas-based processor, Usio, mails the cards to the applicant’s home address or to the address of the sponsoring community group. (According to the grant agreement, the sponsoring group “will develop and document internal control policies and procedures to ensure that the cards are relinquished to the intended recipients.”)

More than 80% of card spending has been used for groceries, household supplies, take-out food, baby care products and over-the-counter medicine, according to data from Usio.

Among those places where the card is being swiped: Family Dollar stores, Save A Lot, Wal-Mart, Royal Farms, HipHop Fish & Chicken and ethnic stores such as the Corona Grocery and The Markets @ Highlandtown.

However, during its first two weeks of operation, Usio mistakenly activated all 317 merchant category codes instead of the 35 that the city had requested.

The disallowed codes were turned off “within two hours of the error being uncovered by the city,” Rath said.

A spreadsheet provided to The Brew shows $44,989 was recorded in unapproved categories – or 9% of the total spent by cardholders in the first 45 days.

The program expects to deplete its $6 million allocation by the end of June. Individual cards can be used until their $400 allotment is exhausted. Funds that are unspent at the end of the grant period, February 28, 2022, will revert to the city.

More information on the program can be found here.