Policy changes proposed for Baltimore’s School Board – including limits on members’ ability to freely talk to staff and the media – are causing alarm and signalling a power struggle as the board adds new elected seats and potentially more independent members.

“Why is it that all communication has to go through one person on the board? It doesn’t make sense to me. Personally, I do not agree with that,” said School Commissioner Ateira Griffin, who was appointed to fill a vacancy by Mayor Brandon Scott earlier this year.

“Nobody’s going to muzzle me. I’m not there to be muzzled – I was born and raised here,” Griffin said at an online meeting last week organized by Baltimoreans for Educational Equity (BEE) to discuss moving Maryland’s only fully appointed school board to a hybrid or elected body.

Tensions had flared earlier in the day over a draft of the new rules, released by the board’s leadership, under which commissioners would have to, among other things, “inform the board chair at least two business days in advance if they would like to speak with the media.”

Likewise, it says commissioners should not contact staff to get information, but should instead go through the CEO.

Another provision that raised questions stresses that board decisions should be made “based upon the best interests of City Schools as a whole and not solely on those interests of any individual or particular special interest group.”

“There’s major concerns on my part and the need to make sure this is not silencing the voices of commissioners,” Brooks said.

Brooks had a particular reason for asking.  He had done something unthinkable in January.

He wrote an op-ed that criticized Schools CEO Sonja Santelises’ decision to begin resuming in-person classes amid a coronavirus surge.

It was a rare show of independence for a body that usually moves in dutiful lock-step with North Avenue.

At the next meeting, the board’s vice chair, after a nod to his free speech rights, dressed him down for it. In a subsequent radio interview, Brooks explained that his op-ed grew out of his experiences growing up in Cherry Hill and his conversations with parents and teachers.

Teachers are “deeply afraid and concerned,” he told WYPR host Sheilah Kast. Among family members, he heard “legitimate fear and distrust in the [school] district” given “the fact that so many of our students go to schools without appropriate heating and cooling systems.”

The proposed communication clamp-down “feels like a response to me, particularly, releasing my op-ed,” Brooks said, asking Chinnia if she could explain who had requested it.

“Absolutely,” Chinnia replied, saying there were “many source.”

The proposed new rules, formally titled, “Board Powers, Responsibilities and Professional Standards,” are only intended for clarification and to consolidate existing policy regarding board members’ roles in one place, she said.

“It’s not just board leadership,” she continued. “As we have new board members that have come on, and during orientation and on-boarding for folks, there has been – and current board members have also said the same thing – that there has been a difficulty at times in finding things.”

“This is not a reaction to any, to your specific inci– you know, to what happened there,” Chinnia told Brooks. 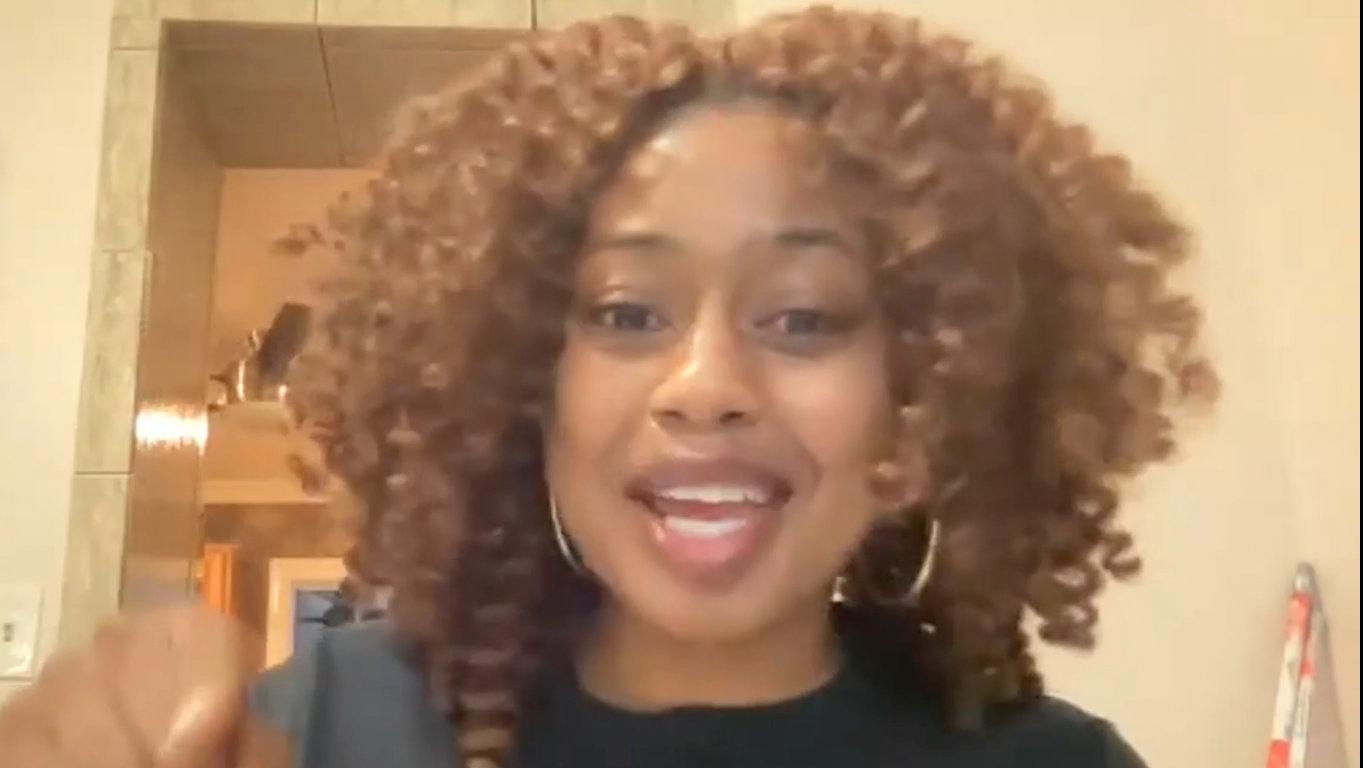 At a meeting of Baltimoreans for Educational Equity, Commissioner Ateira Griffin made a point of saying she was speaking for herself and not for the board.

But critics are highlighting the way the document appears to reduce the board’s power.

Brooks, as well as members of the public who spoke at the meeting, pointed to a place in the draft describing the board’s role solely as “governance.”

Gone was existing language that defined the commissioners’ powers as encompassing “management, maintenance, operation and control of City Schools.”

(In the draft document that board executive Christian Gant circulated, the stricken text was deleted, rather than being shown as “red-lined,” triggering more criticism about lack of transparency.)

“It looks like this is the point where the board gives over its actual power to the CEO,” Brooks declared.

Chinnia frowned and shook her head as Brooks spoke.

“That is not a handing over,” she said, arguing that the district’s partnership agreement with the State of Maryland, “clearly states the role of the board.”

“It looks like this is the point where the board gives over its actual power to the CEO”  – Durryle Brooks.

She also sought to dispel the notion that the proposed changes come from the CEO.

“I just want to be certain, publicly,” Chinnia said, “that folks know that the initiative for looking at the revision of this policy and consolidation of documents and other policies into one good meaty policy really came from the board. This did not come from staff.”

Push for a Hybrid Board

Whatever their source, the policy changes come at a critical juncture for the school board.

Mayor Scott will have three new seats to fill by this June when Chinnia’s term and the terms of commissioners Martha James-Hassan and Michelle Harris Bondima expire.

That’s the same month when the new policy is scheduled to come before the board on first reader.

An even more significant change will come next year when Baltimore, the state’s only jurisdiction with a wholly appointed school board, will  become a “hybrid” board.

In November 2022, two elected seats will be added to the board, which currently has nine members and one student member. 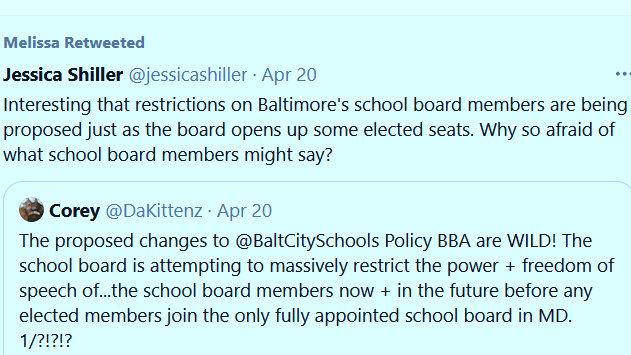 The Baltimore Teachers Union and others in the community are seeking to further democratize the board.

The BTU has assembled a coalition of parents, students and community members pushing for passage of legislation in Annapolis to add even more elected commissioners.

Vice President Corey Gaber spoke about their efforts at last week’s BEE meeting. Among the questions he said the coalition is discussing:

Gaber said the group is working to consider these changes and build support for them.

Another proposed change appears to take away the board’s ability to engage in and oversee collective bargaining.

Commissioner Brooks raised the issue at the policy committee meeting, challenging “this idea that the CEO does the contract negotiation.”

“My view is that the board’s role with the negotiations is oversight,” Gant said, responding to him. “You-all get the reports on it, you have the ability to ask questions. At the end of the day, you have to vote for it.”

“Yes, you approve it,” Chinnia replied.

Needed: “A culture of inquiry”

Even before last week’s meeting, news of the suggested new policy was circulating and in some quarters being poorly received.

Representing the Parent and Community Advisory Board, Rachel Duncan strongly criticized the proposed changes, saying the board has a “responsibility to hold the CEO accountable for making progress towards the school district’s goals and strategic priorities.”

“Preventing board members from directly obtaining information [from staff] without coordinating that contact with the CEO in advance is inappropriate,” Duncan said, addressing Chinnia and the other board members at the policy committee meeting.

“A culture of inquiry should be foundational,” she said, calling it “a sign of a healthy relationship.”

“It feels like this is some type of disciplinary action”  – Jocelyn Providence.

Teacher Jocelyn Providence also spoke, questioning the timing of the new policy “now that we’re getting new elected members of the school board.”

“Also,” she said, “there are school board members that have been very [much] speaking to community members and reaching out to staff, and it feels like this is some type of disciplinary action.”