Looking at the history and old photos of 1313 Druid Hill Avenue, it’s easy to understand why the tall brick building in the Marble Hill neighborhood is listed on the National Register of Historic Places.

The Home of the Friendless sheltered orphaned and deserted children for six decades following the end of the Civil War.

Topped by an elegant wooden cornice and mansard roof, the building went on to serve as a landmark health center for Baltimore’s African-American community.

The five-story structure is now boarded up, dilapidated and vacant. Over the weekend, amid torrential rain, bricks and pieces of the cornice came crashing down to the sidewalk.

Is another city-owned architectural gem about to be lost to “demolition by neglect,” neighbors are wondering, expressing concern that falling debris could injure pedestrians or parked cars.

“I’m getting verbal confirmation from [Councilman] Eric Costello that they’re going to stabilize it, so that gives me hope,” said Marble Hill Community Association development committee chair Stephan Hanley, who owns a home across the street.

Hanley said he hopes the Emergency Condemnation and Demolition Notice posted by the city on the building last Friday is “just a default thing they have on there for liability purposes.” 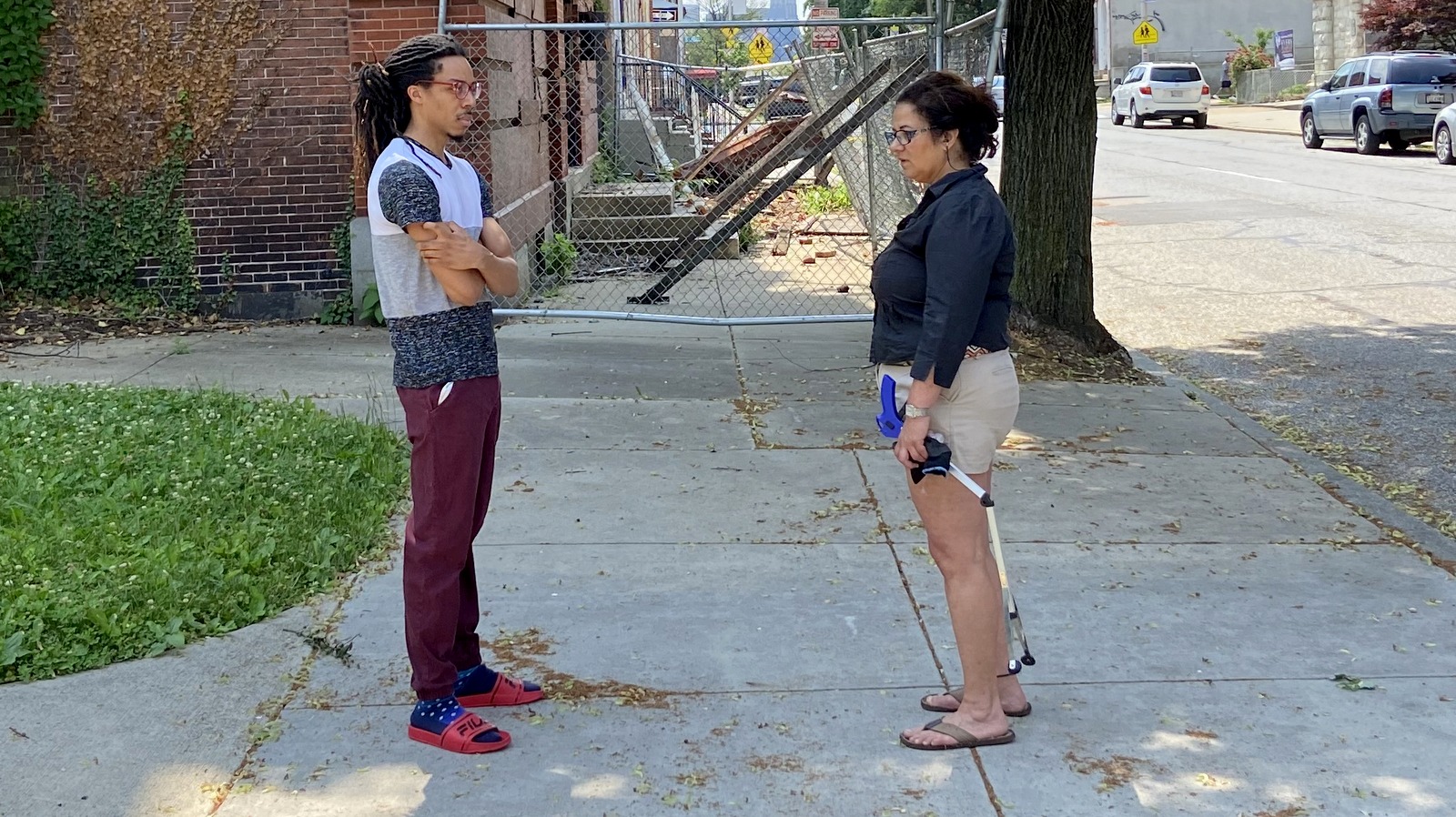 The 151-year-old building is just one of many in the West Baltimore district that Hanley, neighborhood activist Marti Pitrelli and others have been pushing to preserve before it’s too late.

“We’ve been working with the city, met with developers to turn this building into something instead of just demolish it – like they did the others,” Pitrelli said yesterday.

Pitrelli fought unsuccessfully for the preservation of Cab Calloway’s childhood home a few blocks north on Druid Hill Avenue and decried the illegal razing of another historic former orphanage building in Upton.

And she was shocked by the surprise demolition by Bethel AME Church of Freedom House, which served as the historic office of  the Baltimore chapter of the NAACP, hosting Martin Luther King and Eleanor Roosevelt. That act drew both local and national condemnation. 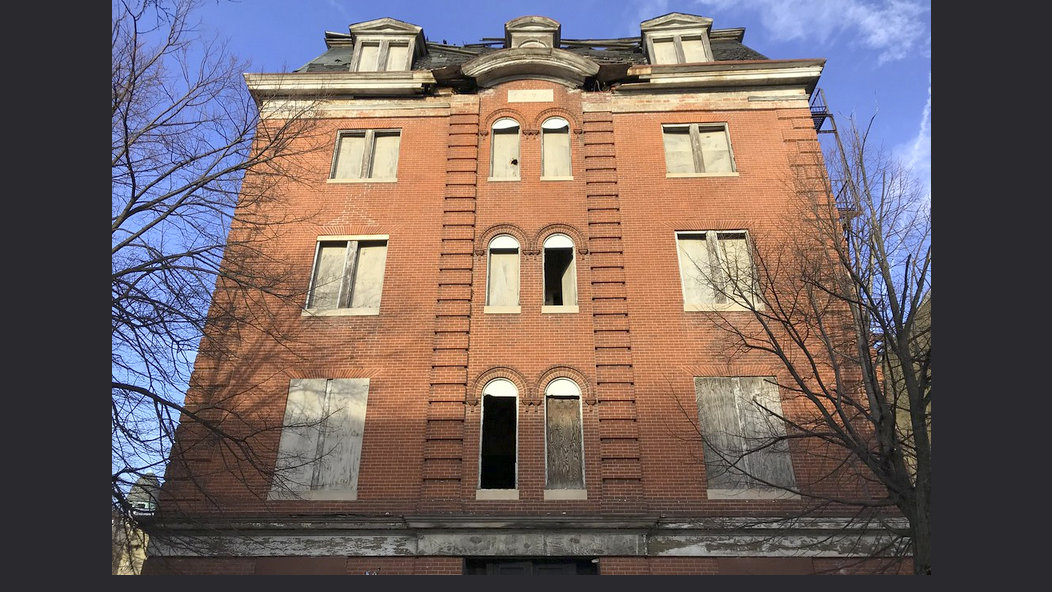 Standing next to the latest pile of fallen bricks, Pitrelli and Hanley spoke about the many structures they cherish in the neighborhood.

The house at 1324 Druid Hill Avenue, for instance, was the home of civil rights icons Clarence M. Mitchell Jr. and Juanita Mitchell. Across the street from the crumbling Home of the Friendless is a former home of Baltimore’s first Black councilman, Harry S. Cummings.

“That was Harry Cummings’ house. He was born and died right there in that house,” Pitrelli said with pride, as she pointed to the red brick townhouse.

“They told me this neighborhood was dead and there was no point, but I love the garden – got a great view of the city,” Hanley remarked, standing outside the renovated house he bought and where he lives in with his wife and infant daughter.

“I absolutely love the history I’m surrounded with,” he added.

Nearby, a Department of Housing and Community Development staffer surveyed the rubble below the Home of the Friendless and squinted up at what’s left of the building’s roof.

How the former orphanage’s roof looked after a portion of it collapsed over the weekend. (Marti Pitrelli)

For years, residents have pushed HCD to stabilize and find someone to redevelop the former orphanage.

They thought a solution had been found in 2016 when the property was sold to Aziz Hosseini’s AZ Group. The plan was to convert it to live-work apartments for artists, with 5,000 square feet of ground-floor retail space.

Returned to the city in mid-2018, the building has continued to deteriorate. A December 2018 violation notice, issued by HCD’s inspection office to owner HCD, cited the structure for not being properly secured and surrounded by debris and high grass.

Failure to correct the conditions would result in $500-a-day fines, the notice said.

No fines were ever assessed, and it wasn’t until last fall that HCD started the search again and issued a request for development proposals.

“It takes a while for the city to get things moving,” Hanley observed.

Asked to respond after the weekend roof collapse, housing officials said that the search process is moving forward.

“We’ve received several proposals and expect to make an award for development in the next few weeks,” spokesperson Tammy D. Hawley said in an email to The Brew.

Hawley said the department is monitoring the site for safety and assessing what other steps can be taken to further stabilize the property.

“I was encouraged to see them out here today,” Pitrelli said. 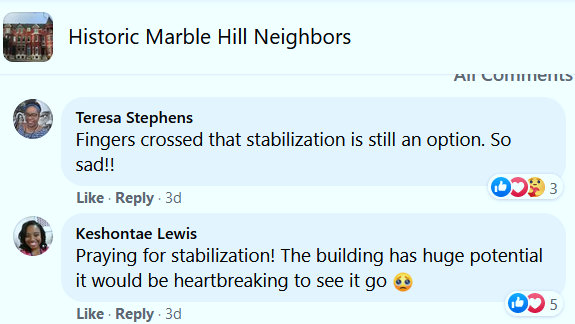 Hanley has been closely following the city’s efforts to find a new owner for the building, which have been overseen by the Upton Planning Committee.

The most recent meeting with developers, he said, was last Friday – just hours before the latest shower of bricks hit the street.

Last January, Hanley attended a virtual meeting to hear proposals from two potential developers. Both acknowledged that, in order to obtain tax subsidies, they planned to gear the property largely toward low-income renters.

“That was pretty disappointing,” Hanley said. “We were hoping for a mix of incomes.” 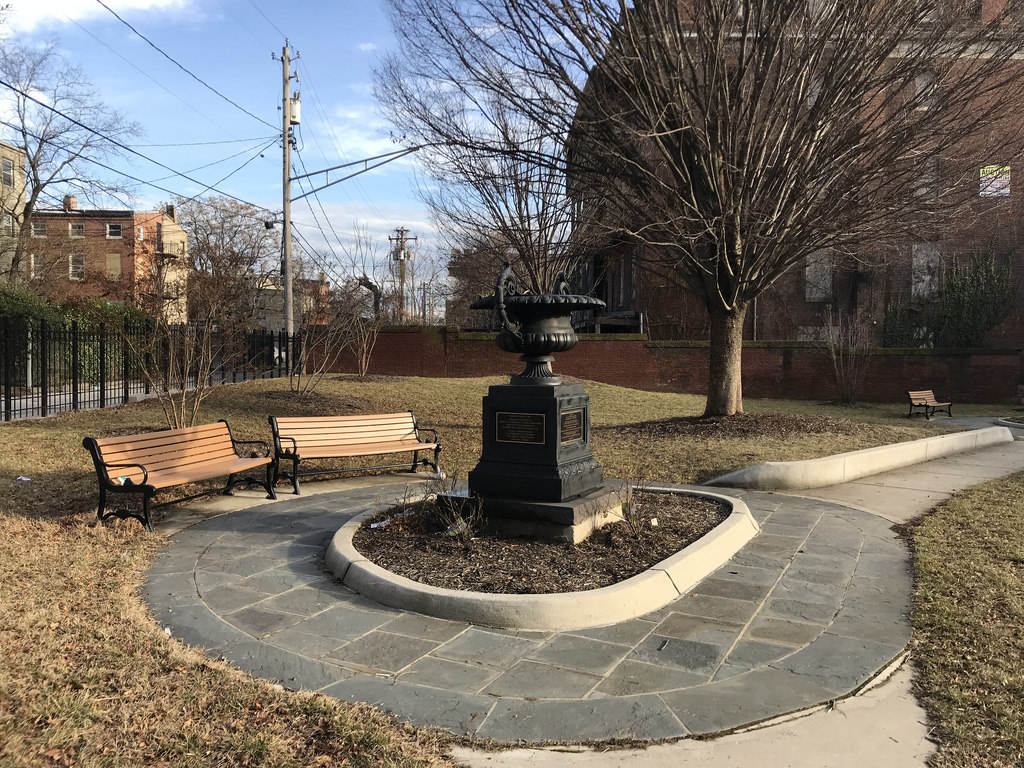 The Henry Highland Garnet pocket park is located next to the ex-orphanage, which can be seen behind the foutain. (Baltimore Heritage)

During that meeting, participants pressed the developers as to why they weren’t considering more market-rate apartments or condominiums. One described the area near the site as primarily home-owned, not rental, saying some properties are selling for $300,000 or more.

“We are looking at other sources of financing, but the reality is that it’s been difficult for us to attract those sorts of financing,” said Jacob Stern, of Somerset Development Company.

He said the units would be pitched to people at 30% of Area Median Income, with the hope of attracting some others at up to 80% AMI.

“The source that is most relatively available – that would allow us to move forward quickly, again, is Low Income Housing Tax Credits,” Stern said.

He cited the urgency of getting the building stabilized before it deteriorates further, as did the other developer, Avram Fechter, of Equity Plus LLC.

“Obviously it has gone through quite a bit,” Fechter said. “The longer it sits, the worse it gets.”