Accusing the Southwest Partnership and “certain of its members” of inaccurate, misleading and unlawful statements about its development project in Poppleton, a lawyer representing N.Y.-based La Cité has sent the Partnership a stern letter of warning.

“The false statement that Center\West will ‘force black residents from their homes’ and that it is a ‘wasteful development project’ is as wrong as it is incendiary,” attorney Matthew D. Stockwell wrote in a letter addressed to SWP Board President Richard Parker.

“As is publicly recognized, La Cité is not working to ‘freeze’ the neighborhood’s revitalization as your organization has claimed,” Stockwell, of the Manhattan law firm Pillsbury Winthrop Shaw Pittman LLP, continued, noting that La Cité is “an African-American owned and controlled company.”

Poppleton residents and their allies call the move a counterpunch by La Cité and its president, Daniel Bythewood Jr., in response to the increasingly public fight by some residents against displacement and demolition for the long-stalled project.

“I see it as them trying to put some intimidation on us,” said Carrollton Avenue resident Sonia Eaddy, who is appealing the city’s effort to take her house through eminent domain. “They’re feeling the pressure. ”

“It is intimidation aimed at people who have been successful at lobbying in the court of public opinion,” added UMBC professor Nicole King, of Organize Poppleton.

The group recently drew more than 100 people to a rally on behalf of Eaddy and the residents of the 1100 block of Sarah Ann Street, who have been told they must leave their historic row of alley houses to make way for the development.

Advocates have been calling out Mayor Brandon Scott and have circulated a petition signed by more than 3,100 people calling for city government to “stop enabling La Cité Development’s displacement of longtime residents in the name of a wasteful redevelopment project.”

Last week, a longtime advocate for historic preservation, Baltimore Heritage, circulated a video calling attention to the uniqueness of the Sarah Ann Street houses, inhabited by Black Baltimoreans since the 1870s, and calling on the city to stop the displacement. 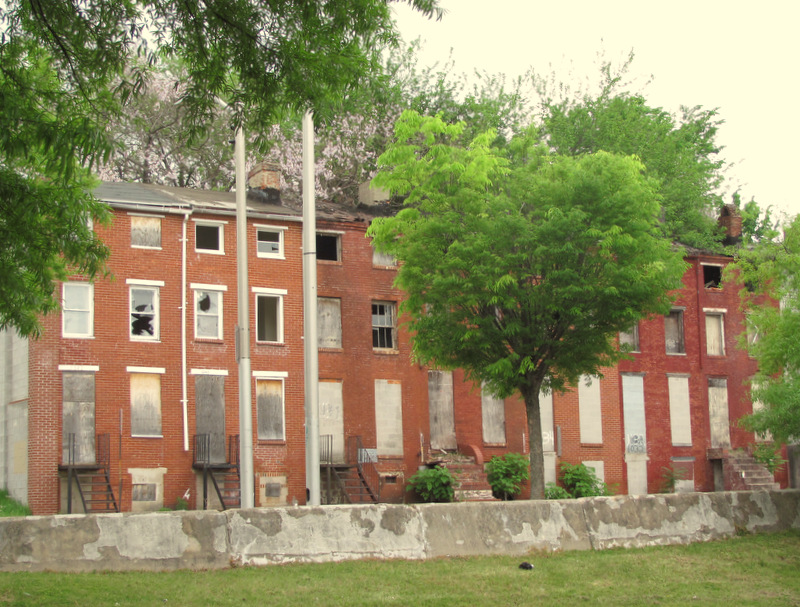 A row of houses waiting to be demolished in July 2015. Six years later, the site near Saratoga and Schroeder streets has yet to be redeveloped. (Mark Reutter)

The lawyer’s letter does not say the developer has filed a lawsuit, but clearly conveys the possibility he could do so.

“La Cité will hold SWP [Southwest Partnership] and any of its members accountable for any further libelous or slanderous statements,” it states, warning that the company “will seek recovery of further damages caused by SWP’s tortious interference with La Cité’s contractual relationships and its prospective economic advantage.”

Asked to respond to the letter, Parker read a one-sentence prepared statement: “The letter from La Cité does not accurately reflect the position of the Southwest Partnership.” 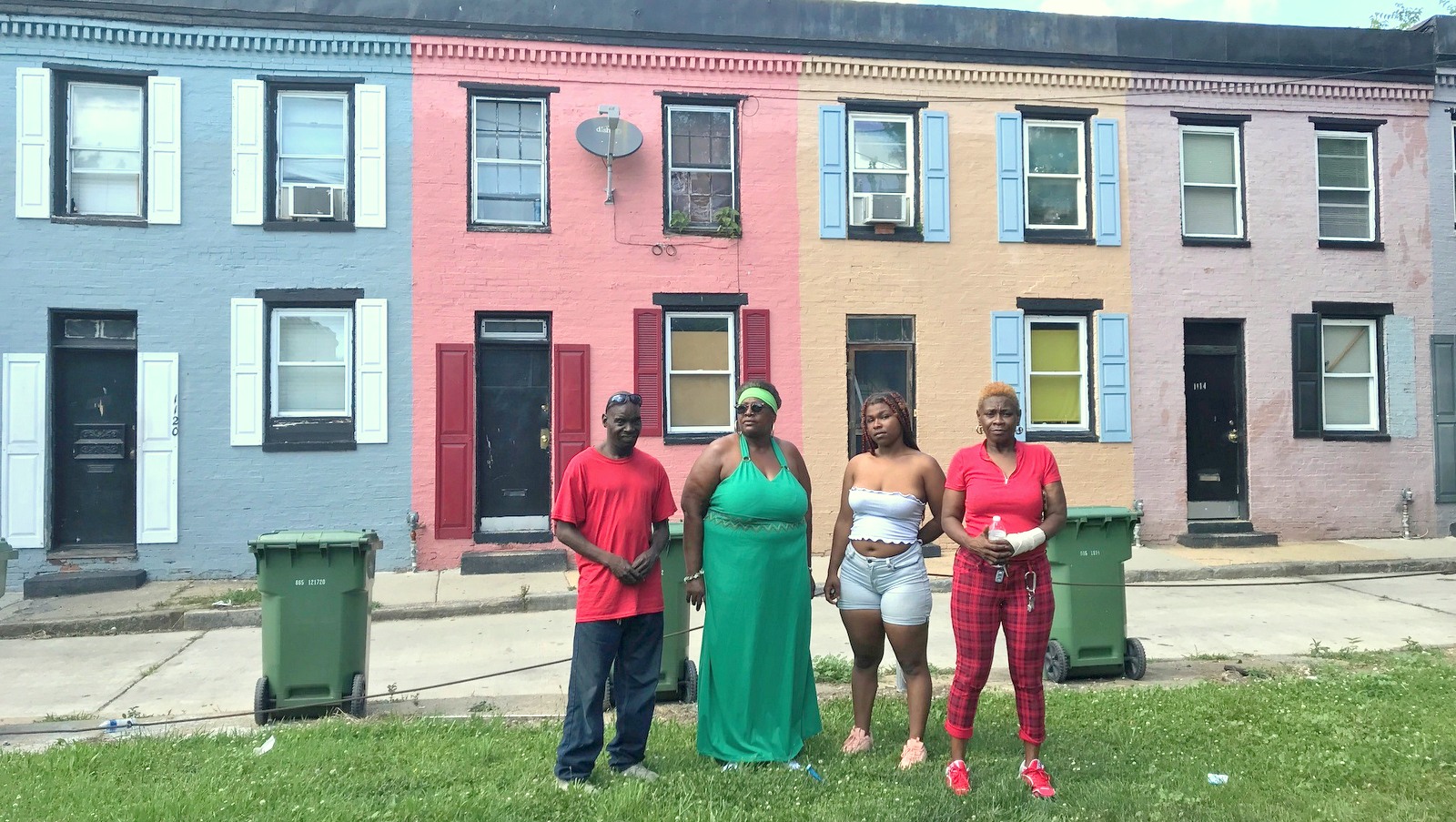 The letter to the umbrella group of seven neighborhoods and six anchor institutions comes amid internal strife over the handling of the Poppleton issue by SWP leadership as well as fallout from a critical Inspector General’s report on the group’s handling of tax sale properties.

Eaddy and King say the La Cité letter was not meant to threaten the leadership of SWP, but rather to alarm members who have spoken out or supported a moratorium on the demolition of historic structures in the area.

“It’s telling them they better straighten us out or the threat is going to be on them,” said Eaddy, who had been the president of Poppleton Now, but whose leadership is now under dispute.

King has complained about what she sees as SWP’s foot dragging on efforts by its historic preservation committee to call for a moratorium on demolition until preservation issues can be clarified.

The board had approved sending a letter to the city calling for demolition to be paused, but King discovered the letter was never sent. Only after a second board vote in June was the letter sent out to city agencies and leaders.

In the interim, Sarah Ann Street residents received letters from the city housing department informing them they must vacate and are eligible for relocation compensation.

Parker declined to comment on the matter in an interview with The Brew.

Meanwhile, demolition continues in the neighborhood where La Cité was given given development rights 16 years ago..

On July 13, three vacant houses located on Eaddy’s block, dating back to the 1840s that the group was hoping to save, were demolished. 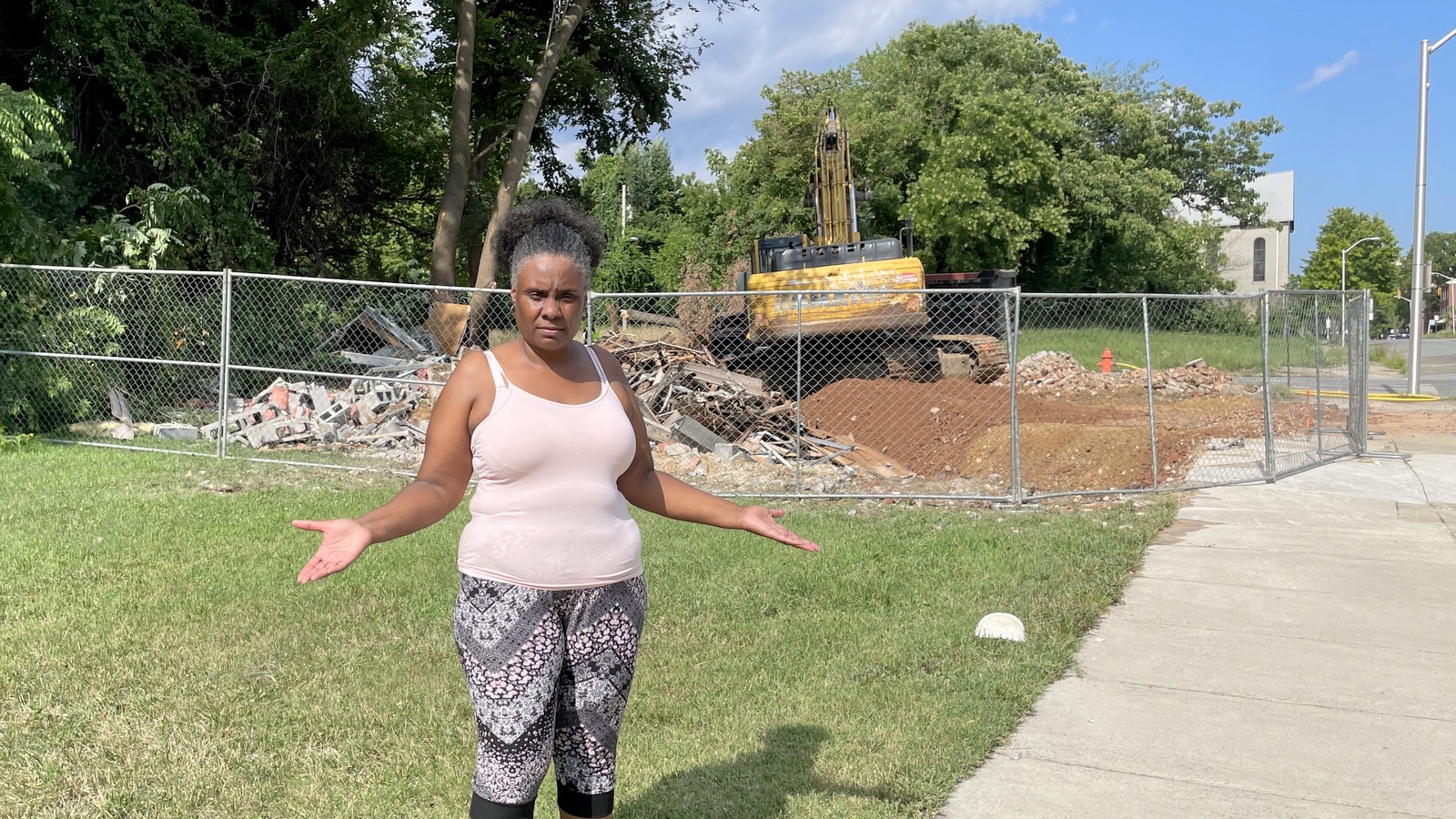 Sonia Eaddy stands in front of the historic houses on her block moments after the city knocked them down last week. (Fern Shen)

Another issue roiling the nonprofit has been Parker’s letter of support for the project, sent on SWP letterhead to Bythewood, without approval of the board.

“SWP encourages the City of Baltimore to support the Center\West plan, as this type of development is what has been missing and needed on the westside of Baltimore for some time,” the letter states.

Parker goes on to attest to support for the project “inclusive of density, heights, and volumes for 3,000 units of quality rental and mixed-use housing located within the existing and approved PUD (Planned Unit Development) that was approved back in 2007.”

Parker’s letter caused an uproar at SWP’s meeting in March, and a vote was taken to rescind the endorsement. But that vote was never acted upon.

Parker declined to discuss the matter today except to say his critics “misunderstood” bylaw rules that permit the executive committee to take such actions, “if it deems them necessary,” in between general board meetings.

Asked why the urgency, he said he was told that La Cité had “some federal and financial approvals” due.

“It seems the new leadership of Southwest Partnership is working with the La Cité developers”  – Nicole King of Organize Poppleton.

King, a professor of American Studies who has been researching, writing and advocating on the Poppleton issue for months, concluded that Parker and SWP’s leaders have sided with Bythewood.

“It seems that the new leadership of Southwest Partnership is working with the La Cité developers and against residents being displaced from their homes,” King  told The Brew. “It is really a shame and does a great disservice to residents.”

Asked why SWP has not spoken up for Poppleton residents fighting displacement, Parker said the community’s representative on the board, Dorothy Page, has asked them not to. “We were asked to not intervene in these matters to allow community to come together to make a decision,” Parker said.

Eaddy, the former president of Poppleton Now, maintains SWP engineered Page’s elevation to the role and she had the presidency improperly taken from her.

Page has not returned a call asking for comment. 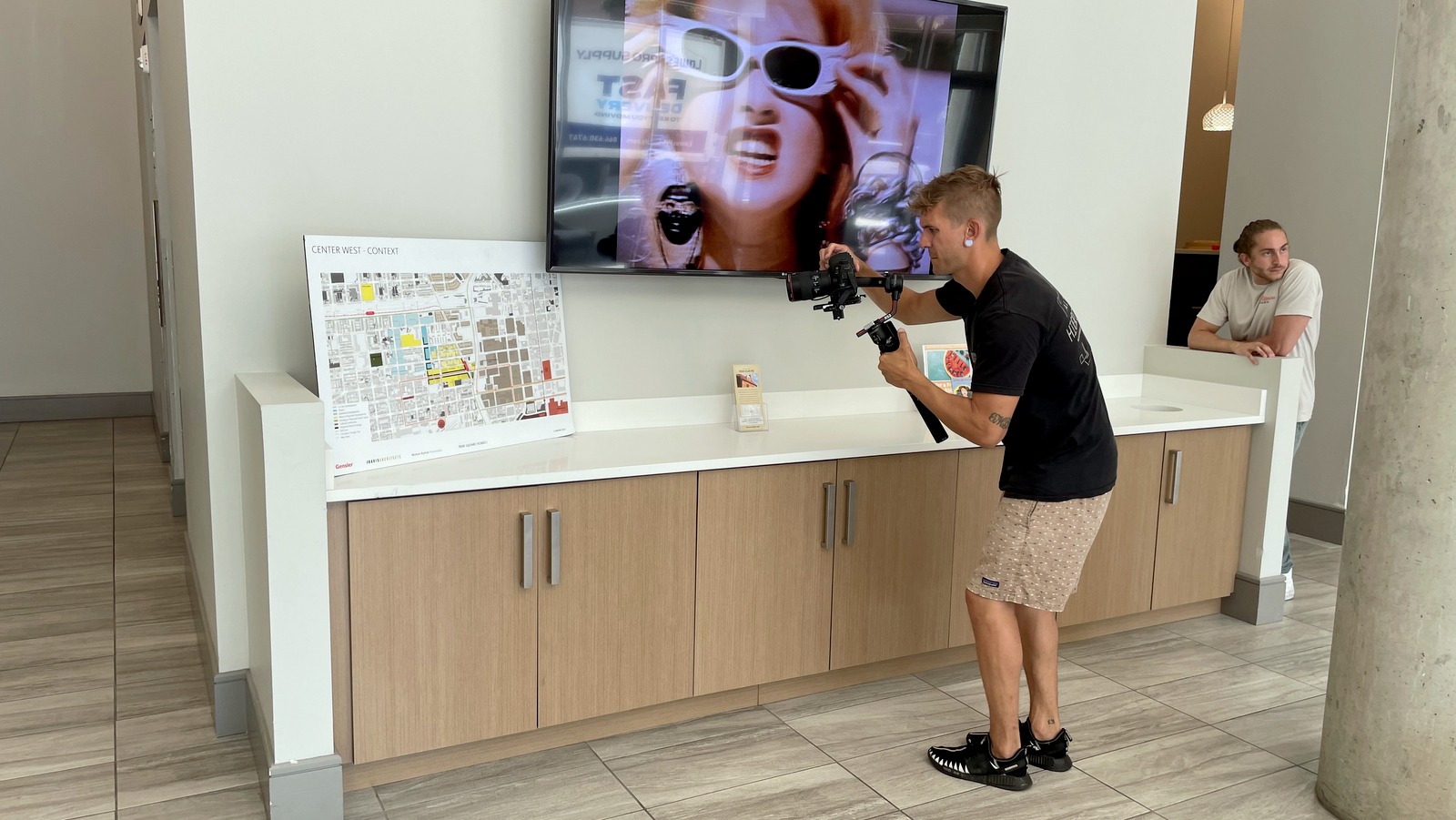 A crew films the lobby of one of the two Center West buildings completed by La Cité. (Fern Shen)

So far, La Cité has completed two apartment buildings – out of 30 planned – despite $58 million in approved tax increment (TIF) public financing. And the city housing department has purchased, demolished and handed over to the developer hundreds of private properties far in advance of any pending redevelopment.

The lawyer’s letter paints a starkly different picture of the project than the one presented by opponents at the Save the Block rally or in a video the group has circulated.

“The Center\West Development has improved conditions economically, increased property values in the neighborhood and is a direct cause of the substantially decreased crime in Poppleton,” attorney Stockwell wrote.

“There has been no disinvestment or decline, but rather $100 million spent on revitalization”  – Lawyer for La Cité.

He describes the two completed apartments on Schroeder Street as “Class A housing with 20% affordable housing at 50% of AMI” and says that the project “created over 400 new jobs in the community.”

“There has been no disinvestment or decline,” he asserted, “but rather approximately $100 million spent on revitalization of a long-neglected neighborhood that had fallen victim to increased poverty, crime and disrepair.”

As representatives of La Cité did 16 years ago, Stockwell promised transformative development, writing:

“Once complete, the project will provide our community with 2,800 new residential housing units and 250,000 square feet of space for shops and restaurants, all while balancing development with parks and green spaces throughout the area.”