After critics raised objections last year to a proposed parking lot across from the Druid Hill Park Pool, the city spending board approved the $10.1 million overhaul of the pool, but the parking lot plan required separate approval by the City Council.

That would change as part of a zoning code modification bill introduced in the Council tonight which specifies that parking lots in a city park or cemetery would no longer require “conditional use” approval.

In effect, Bill 21-0113 would allow 79 new parking spaces on a patch of green immediately north of Druid Lake without a review and Council approval, bypassing a process that includes public hearings.

Introduced at the request of the Department of Planning, the bill “is the opposite of what any other city would do,” tweeted City Councilman Ryan Dorsey, who said he was alarmed to discover the provision “on page 52 of the 88-page zoning update.”

“We deserve so much better than to have to fight with absolute hacks that would be pushing this in the face of climate change and what literally every other city in the world is doing,” Dorsey tweeted.

“This bill means no public process – Rec & Parks can just do whatever they want,” Dorsey told The Brew.

The Third District councilman, who opposed the parking lot plan when it surfaced last year, said he would raise questions about this provision when the zoning bill comes up for a hearing. 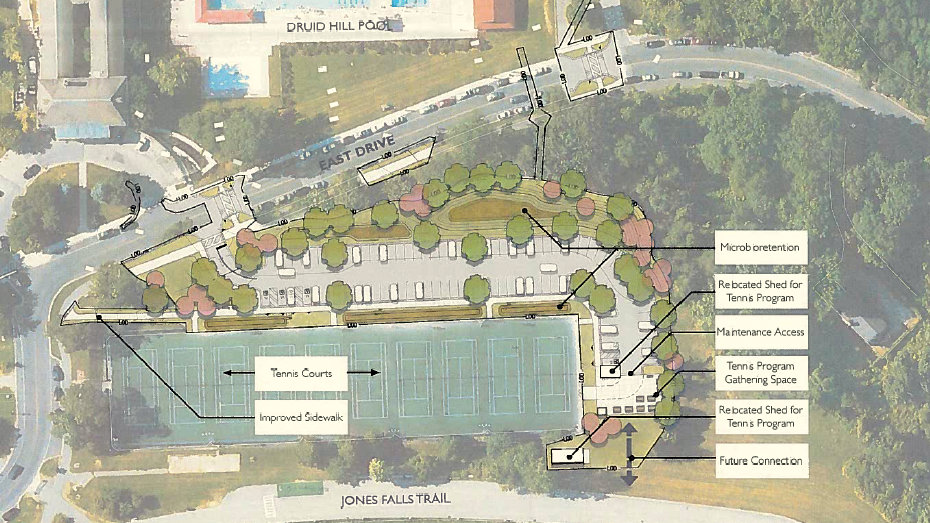 The planned lot would circle the tennis courts that border the northeast corner of Druid Lake. (Department of Recreation and Parks)

The bill makes multiple other changes to the 2016 TransForm Baltimore zoning code that “were discovered to be functionally impractical or otherwise in need of modification to abate previously unanticipated consequences.”

Dorsey said he was unaware of any other public park in Baltimore under consideration for a new parking area.

Asked to comment on the administration bill, a spokeswoman for Mayor Brandon Scott promised to respond with more information on the thinking behind this part of the measure.

Some, including Dorsey, objected to the idea of paving green space and encouraging more cars in the park. Nearby community groups said they were never briefed on the plan.