After The Brew broke the story of his arrest after allegedly threatening a co-worker during a verbal dispute, Brown sent a letter to members of the association’s board, saying he was stepping down as president “for personal reasons,” sources say.

The 64-year-old has been active in local politics. He is especially close to former Mayor Sheila Dixon and counts former Mayor Bernard C. “Jack” Young and 11th District Councilman Eric Costello as allies.

On Tuesday, Baltimore Police charged Brown with possession of  Sig Sauer P365 automatic handgun – fully loaded with 10 cartridges in the magazine and one in chamber – and carrying it in public following an incident at the municipal building. 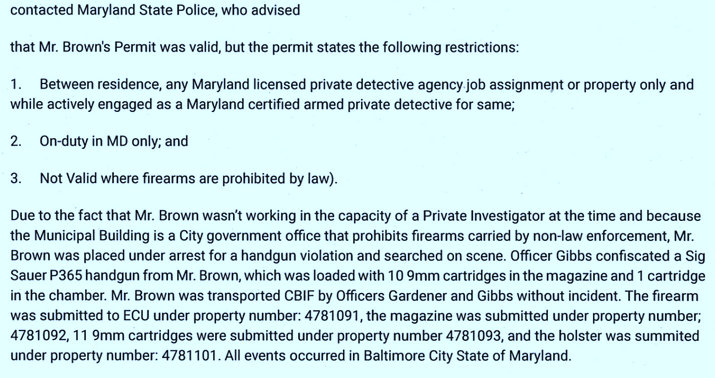 “I got something for you”

In the incident report released today, police allege that Brown told the co-worker, “You want to be a gangster. I got something for you. Come back to my cubicle.”

The co-worker said he did not see a firearm, but felt threatened by Brown and reported the incident to a  security officer stationed in the building.

When four BPD officers confronted Brown in his third-floor office, the supervisor acknowledged he had a handgun in a holster on his left hip.

Brown told police he had a permit to carry a gun and was certificated as a licensed private detective.

The officers contacted the Maryland State Police, who said that while the gun permit and detective’s license were valid, Brown was not working at the time as a detective and was not allowed to carry a gun into a city government building that prohibits any and all loaded or unloaded projectile weapons (Administrative Manual 227-2).

The 64-year-old was placed under arrest, booked and released. He has since been suspended by DPW with pay, The Brew has learned.

Despite his suspension, a white Ford Escape SUV – assigned to DPW’s Bureau of Engineering and Construction – was parked outside his home today. 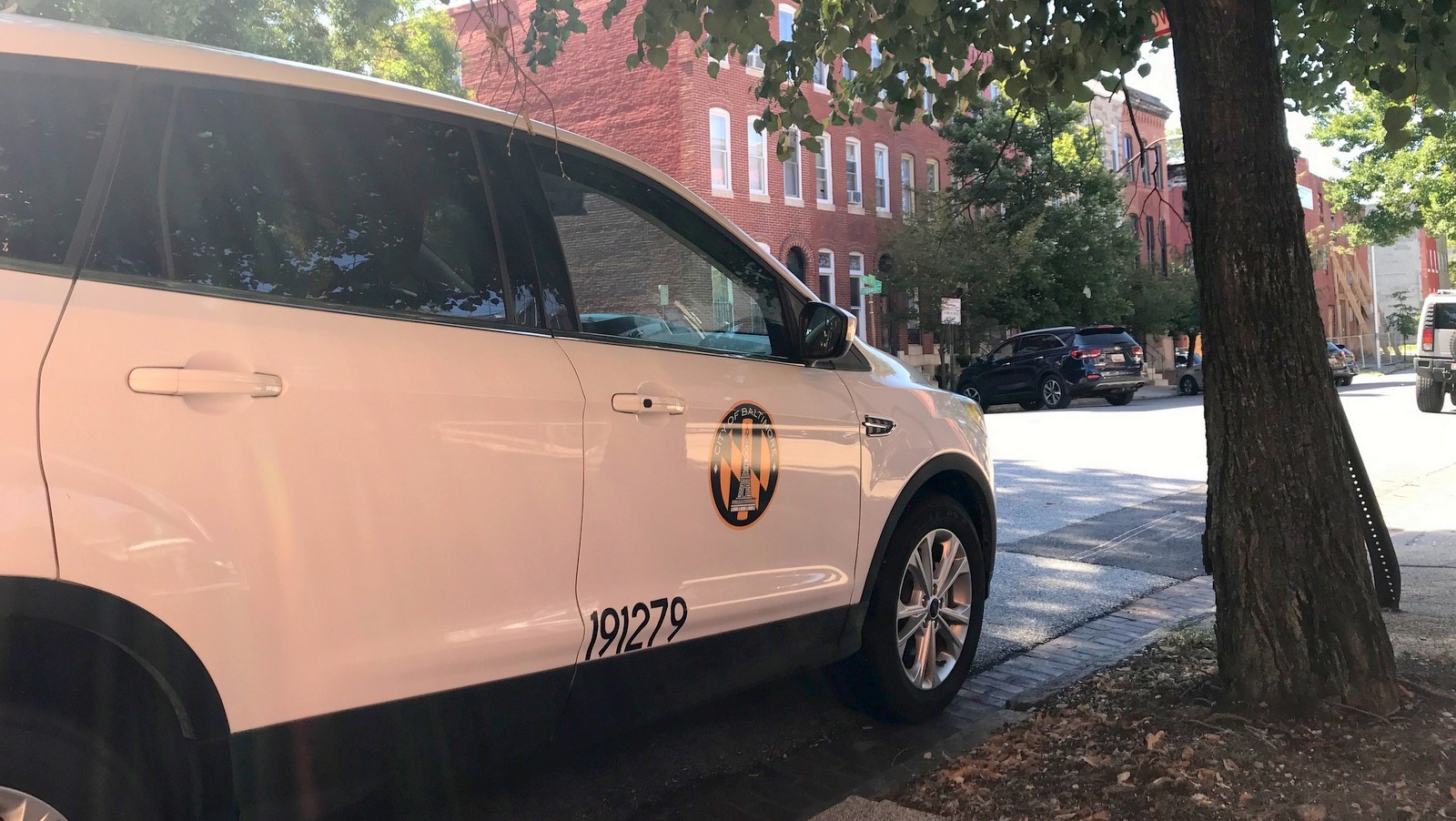 A Ford Escape SUV, assigned to Eric Brown’s DPW unit, was parked today across the street from his Mosher Street residence. (Mark Reutter)

Brown could not be reached. After declining to address the incident yesterday, DPW released a statement today through spokesman James E. Bentley II.

“The health and safety of DPW employees is our top priority,” the statement said. “Any violence or threats of violence will be investigated thoroughly with the appropriate law enforcement agency and swift action will be taken as a result.”

While DPW declined further comment, there were strong words today about Brown from several of his neighbors in Marble Hill, where longtime residents and relative newcomers have clashed.

“I see him as one of the people who don’t want newcomers to have a role in shaping the community,” said Shelley Halstead, founder and executive director of Black Women Build, who agreed to be identified by name.

Halstead was on the Marble Hill Community Association Board until a fire broke out in July at the house she owns and is renovating into artist live-work spaces.

Almost immediately, she said, she and two others were pushed out as board members by then-association president Brown and his allies. “That happened just three days after this fire,” Halstead said. “I was suspicious.”

Asked why she believes she has encountered animosity from Brown and others, she said, “Because they don’t like that I’m doing work in the community. I didn’t kiss the rings of whoever allows you to do things here.”

Marti Pitrelli, a homeowner on Druid Hill Avenue, said she has also experienced hostility from Brown.

She recounted an incident from last October, when she took part in a National Night Out event held at Henry Highland Park on Lafayette Avenue.

“I was standing next to the fire, putting kindling on the lit embers, when Brown came from behind me. Someone squirted a can of lighter fluid into the embers, and the flames shot up, singing the hair of my head and arms. It was Eric Brown. I chewed him out, and he laughed.”

Pitrelli continued, “I don’t know if it was carelessness or intentional, but I do know that after he was appointed president of MHCA, he has yelled at people who were defending me for taking a stand against Bethel Church’s plan to take away parking spaces used by residents. He kept telling them to shut up.”