Last April 21, a citizen complaint was received by the Baltimore Department of Housing and Community Development: “Building in a state of collapse.”

It referred to conditions at 1001 North Charles Street, the former “Grand Central” nightclub in the Mt. Vernon historic district, where a contractor had stripped away the interior of the building, leaving only two skeletal brick walls.

Going to the site, the inspector was met by project manager George Sarkes, who assured him that his employer, JP Porter Construction, “had already addressed the collapse of 1001 North Charles. . . however, they began to experience failures in the shoring/bracing of 4 Eager.”

Sarkes said his builder was “backfilling that area” with dirt, but was “awaiting an engineer’s report before continuing work on 4 Eager.”

Satisfied, the inspector closed out the complaint the same day. He took no further action except to note that “all of the properties are affiliated with the same LLC – Landmark Partners.”

The inspector’s report – disclosing how the city considered and then ignored a complaint about dangerous conditions at the site – is just one of many documents and interviews that The Brew has gathered to reconstruct the timeline of a major historic preservation fiasco.

Fast forward to the present:

The brick walls at 1001 North Charles are still precariously perched amid a maze of supporting wood beams.

Meanwhile, the townhouse at 4 East Eager has been condemned and will soon be razed.

“I haven’t seen these types of preserved Italianate details on other buildings,” he noted. 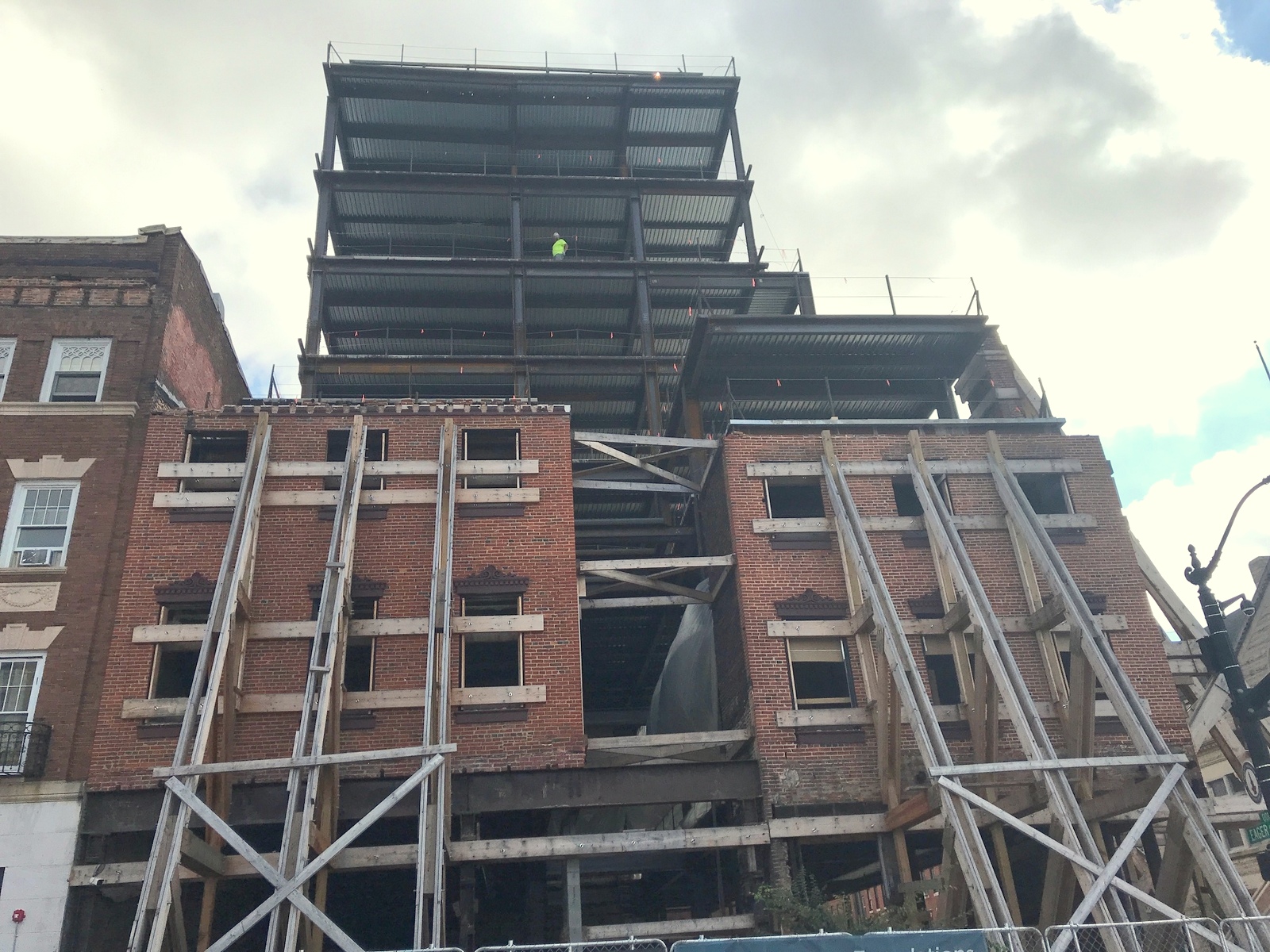 Between the two structures rises the steel skeleton of a new eight-story building, the prize of Landmark Partners, a young, untested development firm that was given extraordinary leeway to build at this congested corner of Mount Vernon.

And since last March, the company has had an equally free hand to control information about the project’s deficiencies.

Landmark Partners was founded in November 2018 by two local businessmen, Jonathan Pannoni and George E. Watson IV. Rehabbing the former Marburg Mansion at 6 East Eager Street, they quickly branched out, buying a trio of city-owned properties on South Gay Street, whose proposed use as affordable housing with space reserved for first responders has stalled.

Costello has been their favorite; they held a fundraiser in his honor in late 2019 while donating $1,400 to his reelection campaign through various entities, according to State Elections Board records.

By this time, they had also purchased Grand Central, home of the legendary gay nightclub run by Don Davis, and were busy with plans to transform the modest 1850s building into high-end office space and gourmet restaurants marked by a sprawling atrium and eight stories of new construction.

“We’re trying to respect the historic fabric of the building and to activate the Eager Street facade,” Pannoni told the Baltimore Business Journal. 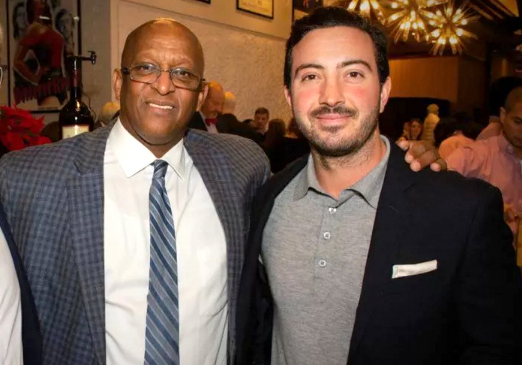 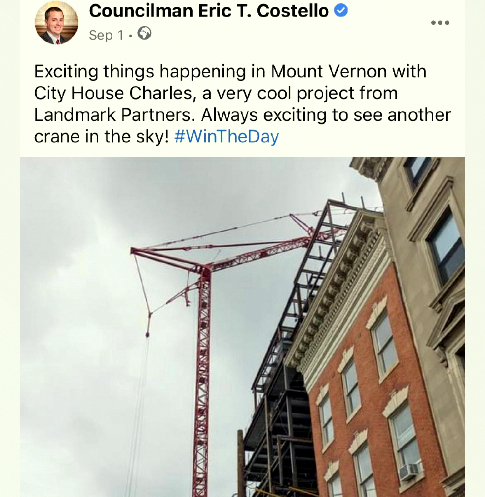 In June 2020, the company bought 4 East Eager Street, the townhouse between the former nightclub and the Marburg mansion.

Securing a building permit last November 13, JC Porter, which formerly employed Pannoni as its marketing and development manager, was six months into reconstruction when the inspector visited the site.

The inspector’s report, obtained through a Maryland Public Information Act request, runs counter to testimony by a top housing official that he had “no idea” that problems existed at the site until September 2, when Pannoni requested permission to demolish the townhouse.

“One of the worst properties I’d ever been in.”  – Eric Uttenreither.

“Usually when a property is in this type of shape, we get phone calls from the fire department or the police, and we know about it, so we go out there. In this situation, I received none,” Eric Uttenreither, assistant commissioner for building and demolition, testified at the September 14 hearing of the Commission for Historical and Architectural Preservation (CHAP).

Walking through the house following the demolition request, Uttenreither characterized the damage in the building as “one of the worst I’d ever been in. . . everything is tilted.”

He then repeated to the commission: “I had no idea what was going on, and there was nothing reported to us that it happened.” 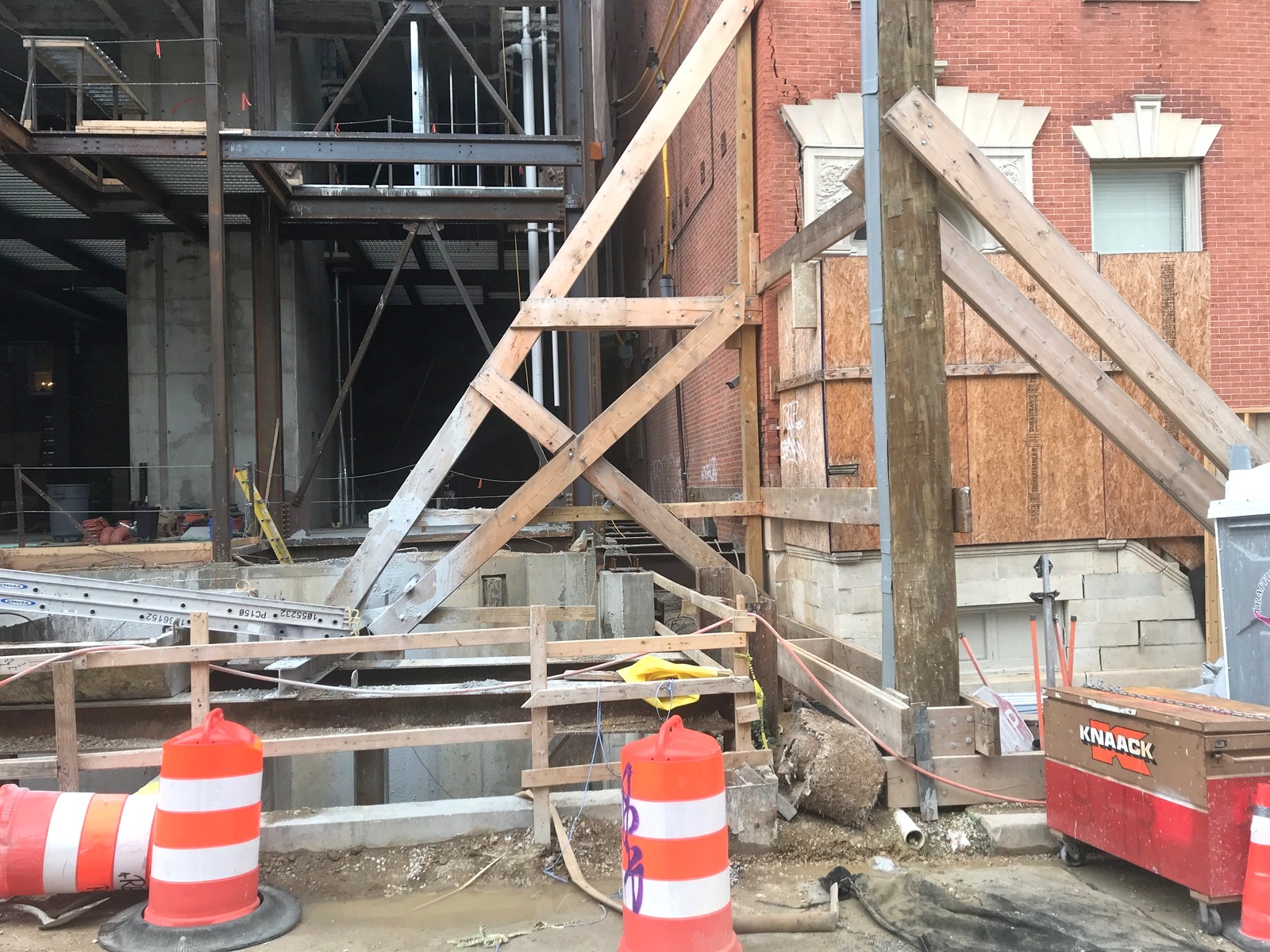 Location between the two buildings where the risk of falling debris is greatest. Note the vertical cracks near the door, indicating that the brickwork could easily peel away from the building. (Mark Reutter)

Pannoni also absolved himself of responsibility.

“We obviously had no intent to demolish the building whosoever. There was an external force in effect that put this building in jeopardy,” he told CHAP last week.

Blaming the building for not having proper foundation footings (few Civil War-era buildings ever did), Pannoni said his company made “a tremendous effort to stabilize this at a high economic cost. We did this because we love these historic buildings, and we wanted to get involved.”

Reached today, he declined to be interviewed, saying, “I’m not talking about it, man.” 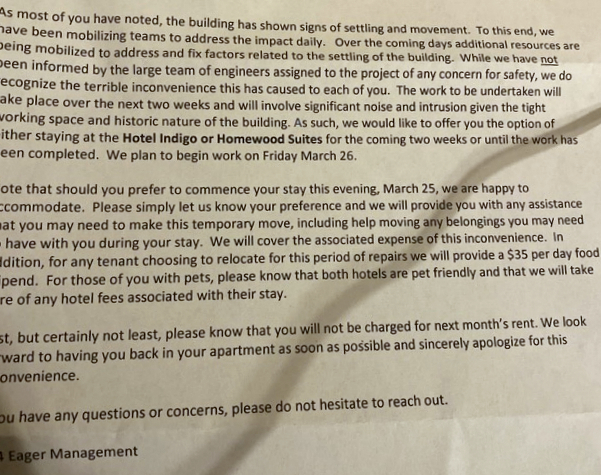 Saying that “somebody is culpable” for the building’s damaged condition, CHAP’s chairman, Tom Liebel, failed to mention the commission’s own approval of Landmark’s plans back in 2019.

The original Grand Central building ended about 22 feet from a narrow alley that separated the lot from 4 East Eager, according to Don Davis, the former property owner.

“There were two porches in the back and an open courtyard. There was room to breathe,” Davis said from San Antonio, where he now lives.

CHAP allowed the builder to set back its eight-story building to within four feet of the historic townhouse.

CHAP permitted Landmark Partners to set back its eight-story tower right to the narrow alley – or within four feet of the townhouse.

The same week that Landmark won “concept approval” of the 35,000-square-foot tower from CHAP, Costello got a $250 contribution from “LP 1001 North Charles Street,” the LLC  founded by Pannoni and Watson to develop the property. 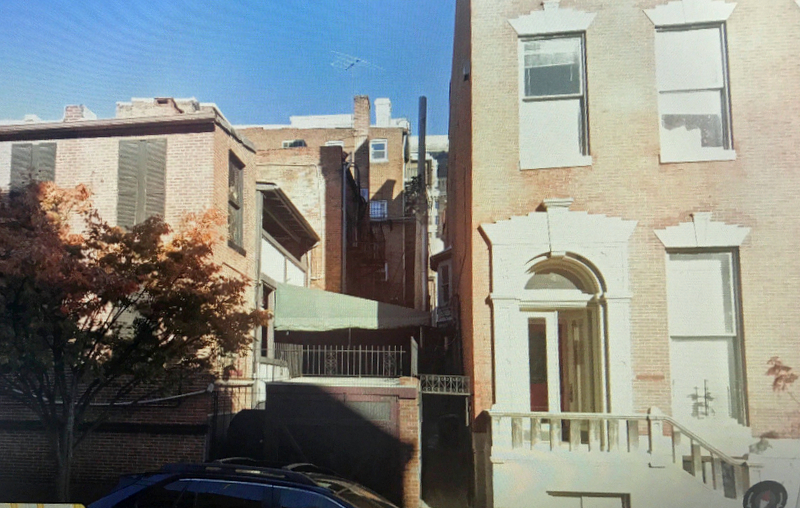 THEN: This 2020 photo shows the space separating the rear of the Grand Central nightclub and 4 East Eager. (Google StreetView) 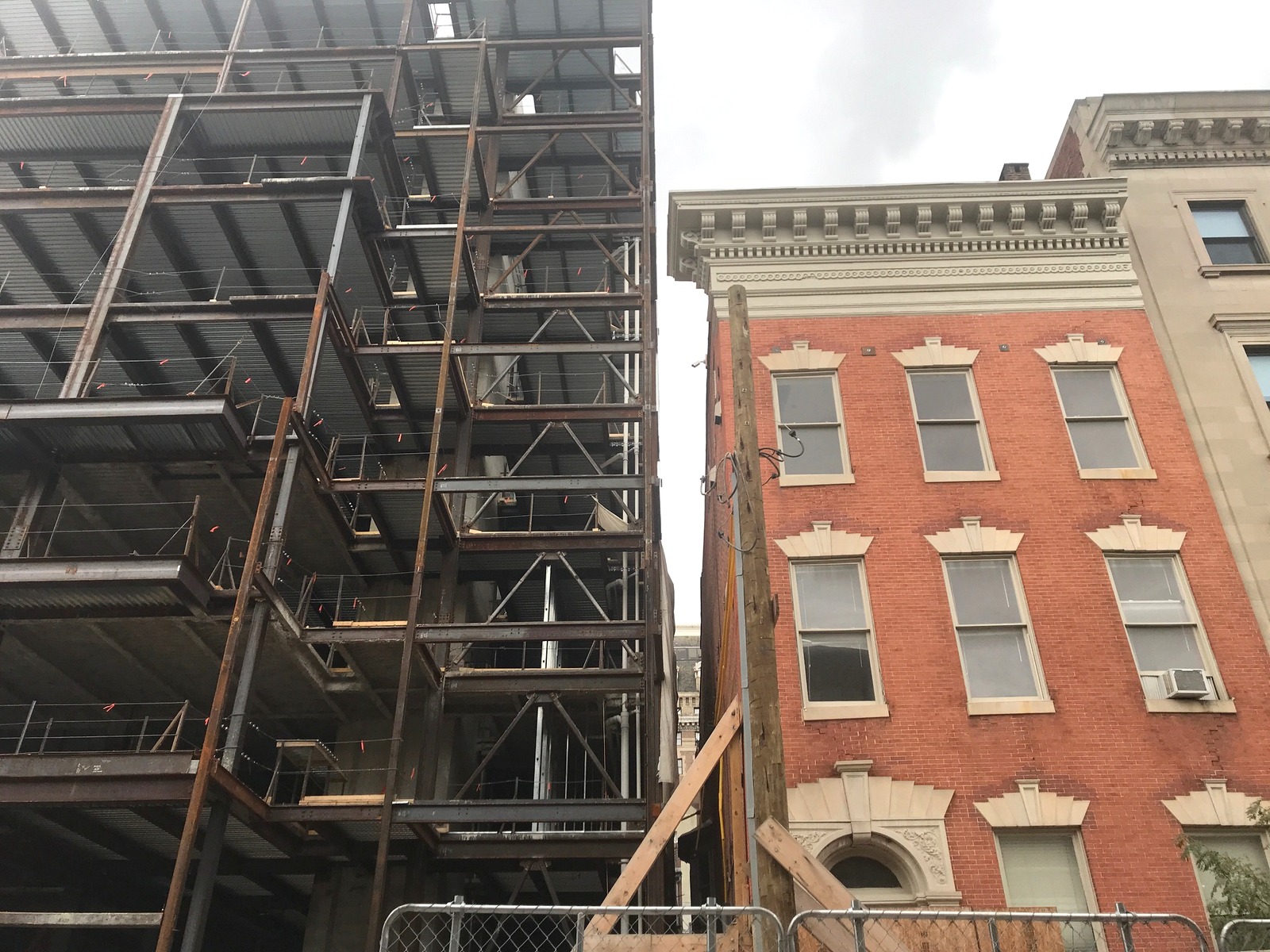 NOW: The tight space between the two buildings doesn’t permit easy access to firefighters. Note the distance that separates the townhouse’s upper cornice and bay window (shaded behind the side brace) from the steel building. (Mark Reutter)

The risks inherent in digging a foundation so close to an old building, combined with the failure of a so-far-unnamed subcontractor to properly sheet and shore the excavation site, led to a “terrifying” night for tenants who lived at 4 East Eager on March 24, 2021.

“It began with loud, crashing sounds in the hallway,” one of them told The Brew. When she opened up her front door, dust was swirling down the stairwell and plaster was everywhere.

“I’m coughing. I’m scared. I’m thinking, this building is going to fall apart over me.”

Not able to make contact for instructions from Landmark Partners, she left her apartment around 2 a.m. to stay with friends. The next day she wrote about her experience: 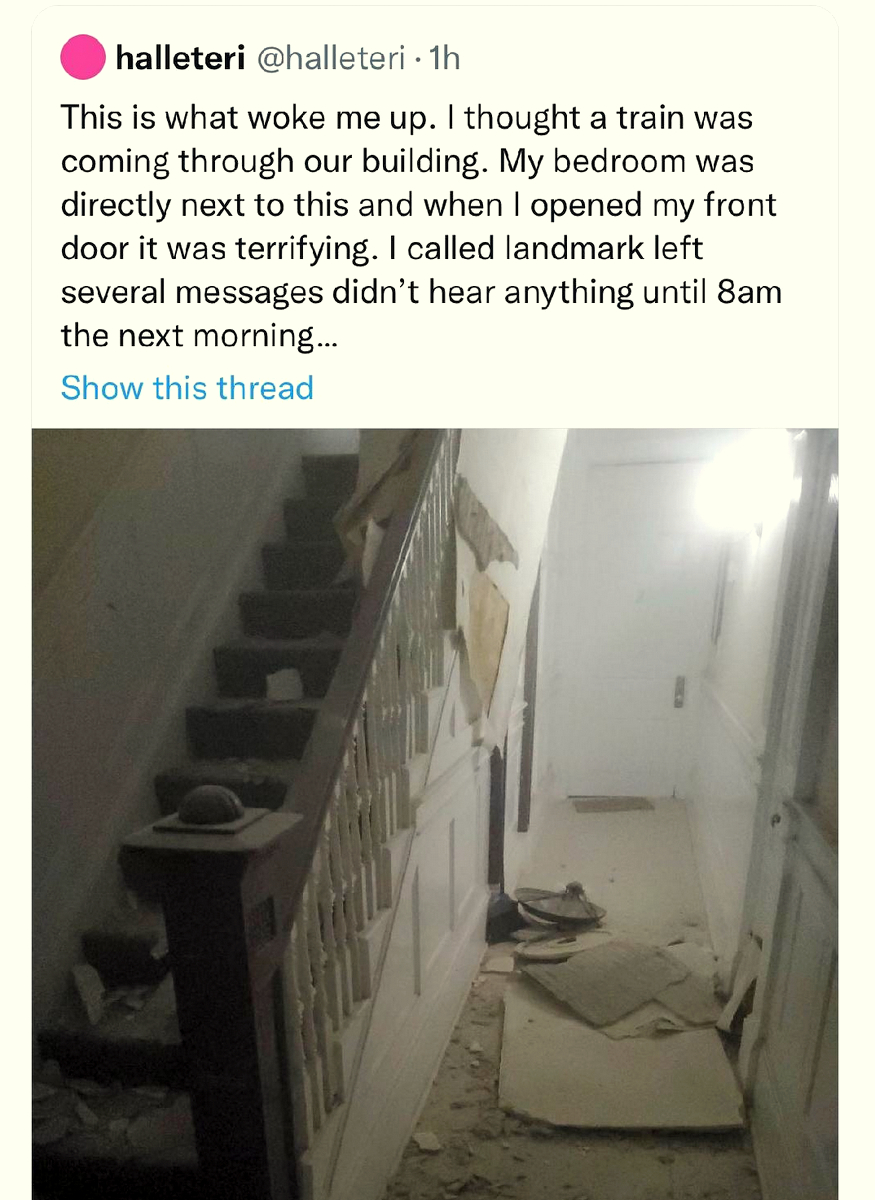 Hours before the plaster came tumbling down, Geotechnical Engineer Eric M. Reuling told Pannoni, in a March 24 letter obtained by The Brew, that crack monitors were showing signs of movement in the building as the office tower’s foundation was being dug.

Fortunately unscathed by the falling plaster, the tenants were moved to local hotels.

Fortunately unscathed by the falling plaster, the tenants living in the building’s 10 units were “evacuated” to local hotels, with Landmark Partners paying the costs. An email sent to the tenants promised that repairs would be made quickly, and they would be back in their apartments within two weeks. 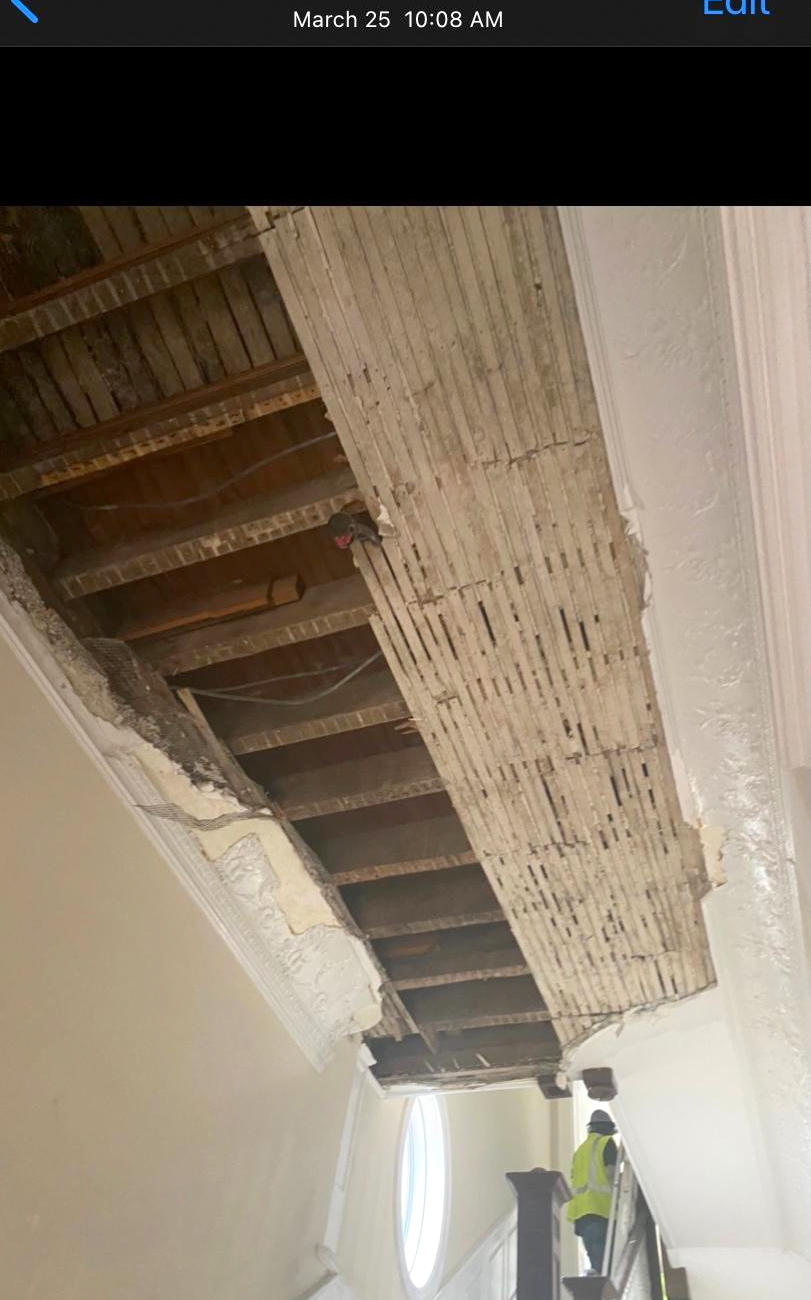 On April 7, however, they received another letter from “4eager.com,” Landmark Partners’ management team:

Unlike when we first told you about the issues, we have since been informed that the building is not fit for human habitation. Unfortunately, we are unable to estimate with any accuracy when the repairs will be complete or when it will be safe for you to return. As such, we must regrettably inform you that we must terminate your lease to the immediate and ongoing purpose of substantially altering the building, the work of which cannot practically be done with our tenants in possession of their respective premises.

Landmark paid for their hotel accommodations through April 23. It also mailed out a food stipend check of $245 and a moving stipend of $700 to each tenant, requesting that they schedule a time to retrieve their belongings.

None of this information was apparently made available to the city inspector on April 21.

And if the inspector did inquire about the obvious signs of distress at the building – the boarded-up front entrance, the split marble steps and the crack lines running up the brick walls – he did not mention it in his report.

Nor did Pannoni and Watson undertake permanent repairs on 4 East Eager Street before it was too late.

The engineering firm, Skarda and Associates, had provided them with sketches for the temporary shoring of the building so that emergency repairs could be undertaken.

Pinning columns and needle beams were installed on a temporary foundation for 4 East Eager, and Simpson anchors held up the joists on the upper floors.

But the broader recommendations by Skarda and Associates to remove parts of the basement wall and install helical piles and grade beams as part of a new basement wall were not followed.

In a letter sent to Pannoni on September 9, Skarda’s chief engineer, Stephen M. Brown, wrote, “To date, no emergency repairs were made.”

Meanwhile, measurements compiled by Reuling found that the walls had shifted considerably since March – as much as 3.12 inches horizontally and up to 2.88 inches vertically. 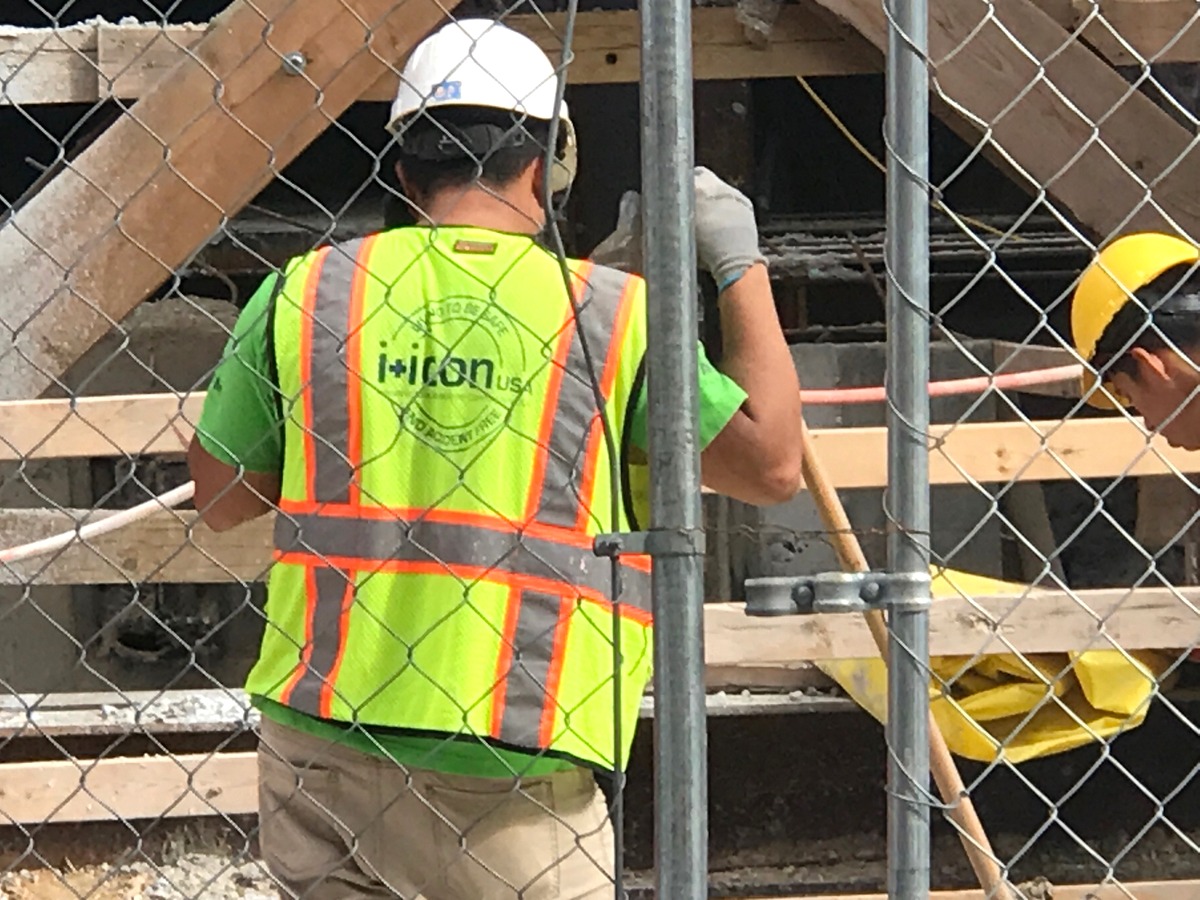 Workers at the building site next to the condemned building. (Mark Reutter)

Another engineer, Mark Duckett, concluded that the entire building had become unsafe, writing to a lawyer representing Pannoni and Watson:

The Duckett letter was dated September 2.

As of yesterday, no safety perimeter has been established around the townhouse.

One can walk up its broken front steps to the very wall where the building leans most precariously. Cars and pedestrians continue to use Eager Street, and the Maryland Club operates across the street.

Throughout the day, workmen carry materials, sweep the grounds, descend into the new foundation and perform other tasks within feet of the condemned building.