Calvert County will also lose its HMO, PPO and PPO Plus Medicare coverage, according to documents obtained by The Brew.

A total of 5,915 enrollees – 5,549 in Baltimore City and 366 in Calvert County – will be impacted by the dropped coverage, a spokesperson for Hopkins Advantage MD told The Brew this evening.

In a written statement, the spokesperson blamed Maryland’s health care payment model, which equalizes the costs of major procedures among state hospitals, but has “the unintended side effect” of reducing federal funding for Medicare supplement plans.

This underfunding has caused Hopkins “to reduce its footprint. . . in some regions where health risk is higher,” namely the city and rural Calvert County.

The spokesman did not explain why Hopkins did not wait until the Covid-induced public health crisis had passed before terminating its plans.

Instead, the statement stressed that Hopkins has made “communicating with impacted members a top priority,” mailing out a notice to those affected that the insurance products will no longer be available.

We asked whether the terminations could leave low-income residents vulnerable to illness because they will skimp on prescription drugs and medical treatments they can’t afford to pay.

The spokesperson did not respond except to note that several private carriers have exited from the Maryland market. 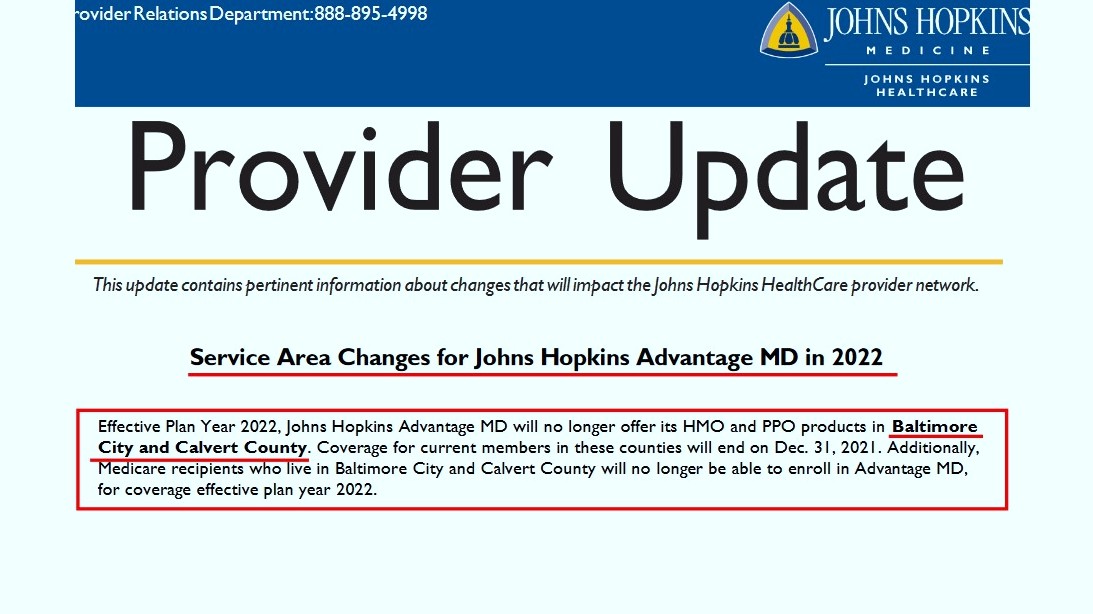 Notice sent to health providers that Advantage MD members in Baltimore City and Calvert County will be terminated. (hopkinsmedicalcare.com)

Altogether, about 350,000 individuals, including current and retired hospital and university employees, are enrolled in various Hopkins-run plans, which connect patients to a large network of regional doctors and hospitals.

Johns Hopkins HealthCare LLC, the nonprofit corporation that runs the insurance programs, has not issued a public announcement of the dropped coverage.

But a single-page letter, sent to doctors and other network providers, explained how the changes “will impact your Advantage MD patients,” including:

• Dropped members who do not select a new private plan by December 31 will automatically revert to “Original Medicare” Parts A and B, which continues basic coverage, but does not feature pharmacy coverage.

• Those who want reduced prices for prescription drugs will need to purchase Medicare Part D or enroll in another private plan.

• Those hospitalized after December 31 will only be eligible for Part A Medicare services unless they join another plan.

• Those in a skilled nursing facility after December 31 will be on their own financially, with Advantage MD not responsible for any charges. 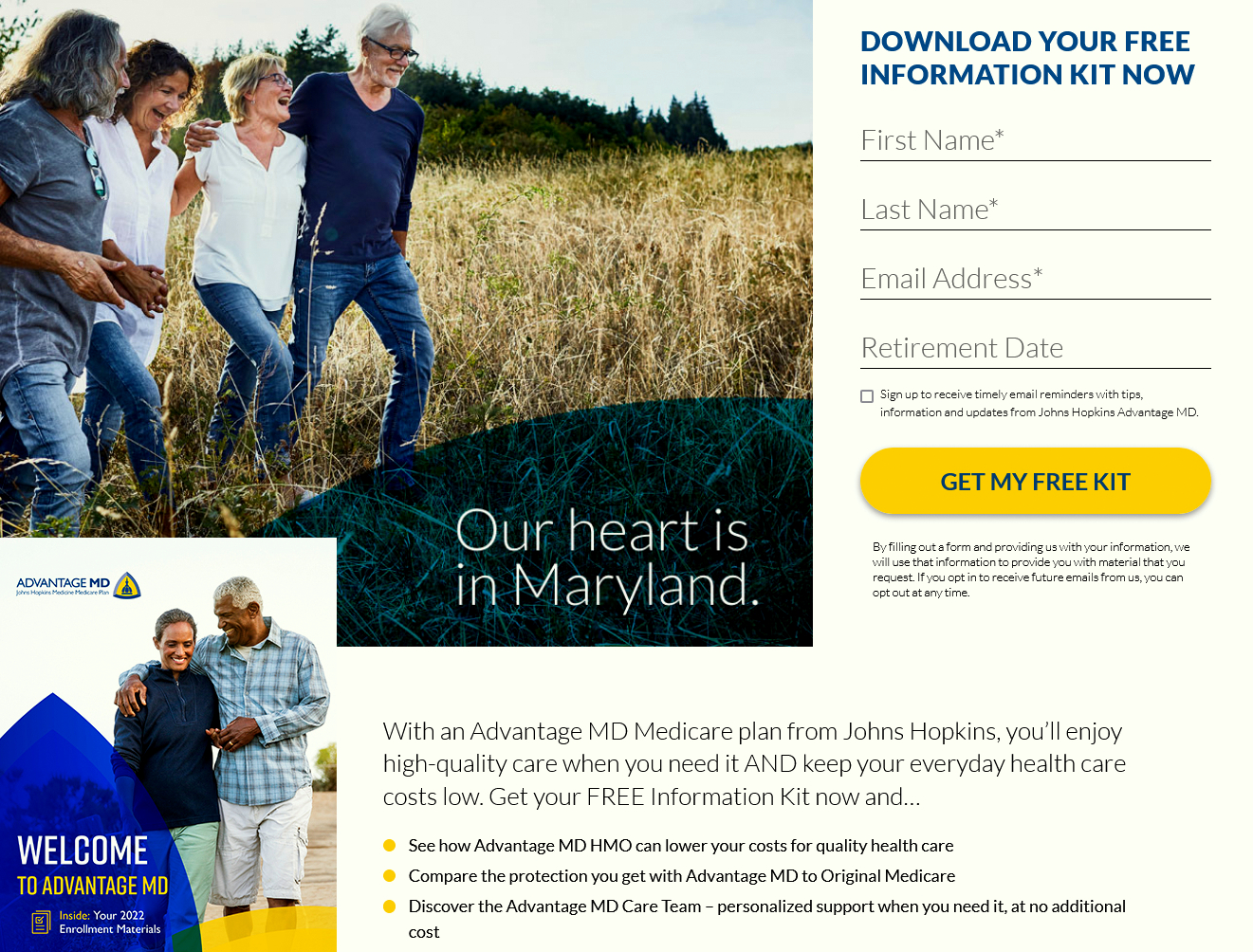 Laughing seniors stroll across a farm field as Advantage MD declares, “Our heart is in Maryland.” (hopkinsmedicalcare.com)

The shrunken service area is the latest change to a program that was started in the mid-1990s as part of John Hopkins’ mission to “provide the highest quality patient health care in both the treatment and prevention of human illness.”

The basic Advantage MD plan was originally free for city residents and only $20 per month in the surrounding counties, which proved highly attractive to seniors faced with large increases in premiums from private insurance carriers.

The increase came after the insurance program, based in Glen Burnie, sustained heavy financial losses, resulting in the removal of senior executives and the hiring of James P. Holland as president.

Holland previously was at Indianapolis-based Anthem Inc., licensee of the Blue Cross/Blue Shield chain of hospital and health insurance plans.

As a comparatively small health care manager, Hopkins has been under pressure by national carriers like Anthem, UnitedHealthcare and Kaiser Permanente.

Paul B. Rothman, dean of the School of Medicine, said Holland would bring private-sector knowledge about how Hopkins could partner with other corporations across geographic regions “as we continue our work providing high-quality, cost-effective care.”

Starting January 1, 2022, members in the 10 counties covered by Advantage MD will pay a monthly $30 premium for basic coverage and $55 for added coverage.

Monthly premiums for Hopkins’ PPO basic product, again available only in the 10 counties, will increase from $91 a month to $100 a month, while PPO plus will start at $130 a month.

A top-tier PPO, which features comprehensive dental coverage, is only offered in Montgomery County. It will cost $301 per month in 2022. 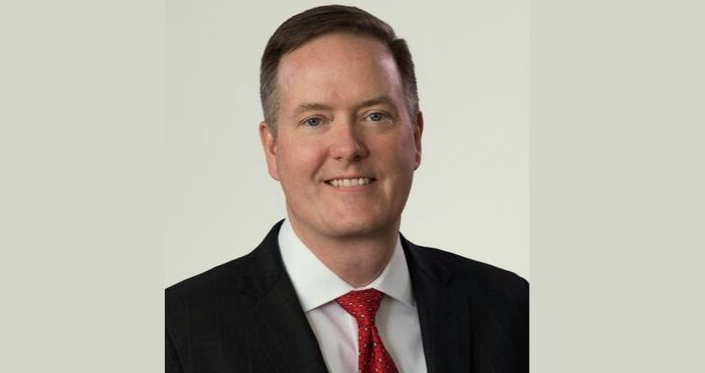