Charges against a former senior supervisor at Baltimore’s Department of Public Works who brought a pistol into a municipal building and allegedly threatened a colleague are being placed on hold indefinitely.

In a deal offered by prosecutors and approved this morning in Baltimore Circuit Court, Eric M. Brown’s case will be placed on the “stet” docket, meaning it will be inactive unless either party requests that it be revived.

Under terms approved by Circuit Judge Melissa Copeland, the gun charges faced by Brown will remain inactive and, if he incurs no new charges, are eligible to be dismissed after one year.

“Next November, we will probably file a motion to re-open the case for the purpose of dismissal,” said Brown’s attorney, Tony Garcia, of the Bates and Garcia law firm.

The State’s Attorney’s Office, asked by The Brew why prosecutors didn’t proceed with trial as scheduled today, have not responded.

Garcia said the case is slated for likely dismissal because “Mr. Brown really didn’t do anything wrong – this was just a mix-up.”

He acknowledged that it is illegal to carry a loaded or unloaded gun into a city building (Administrative Manual 227-2) but said his client could not have been expected to know that.

“There is no sign in the building,” Garcia observed.

In offering the deal, Garcia said, prosecutors likely took into account Brown’s “exemplary work record over 20 years and that he was a high-ranking employee, well-trusted.”

“This city is plagued with so many crimes involving gun violence,” he said. “They recognized this was a non-criminal-intent error.”

Pistol on his hip

By agreeing to have his case “stetted,” the 64-year-old Brown waived his right to trial.

He is charged with illegal possession of a handgun, possessing a loaded handgun and carrying a handgun in public.

In the Baltimore Police Department report for the August 31 incident, police said officers responded to a call from the Abel Wolman Building across from City Hall where they were told an agitated Brown threatened a co-worker.

“You want to be a gangster. I got something for you. Come back to my cubicle,” he allegedly said, according to the arrest report.

Sources told The Brew multiple people witnessed the altercation and that employees were “terrified.”

The co-worker said he did not see a firearm, but felt threatened by Brown and reported the incident to a security officer stationed in the building.

Police found Brown in his third-floor office with a SIG Sauer P365 pistol in a holster on his hip.

Garcia noted that Brown’s gun permit and private investigator’s license to carry a gun were valid. He also told The Brew the gun “was not loaded at the time.”

But the police report said the weapon was found “with 10 9-mm cartridges in the magazine and one cartridge in the chamber.”

Sources told The Brew that multiple people witnessed the altercation and that employees were “terrified that there was a supervisor walking around this building with a loaded gun.” 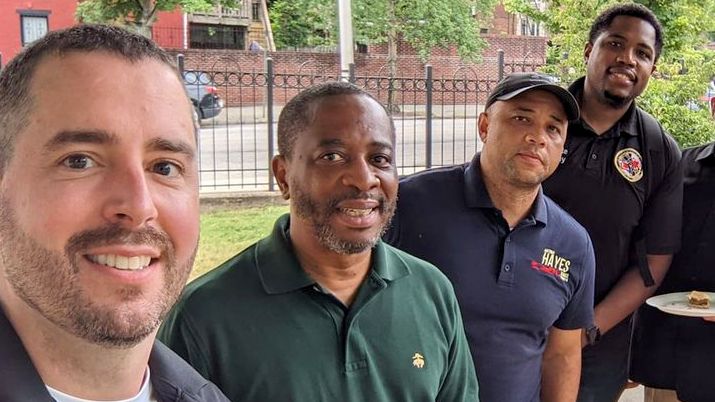 As The Brew reported, Brown retired from his job as a supervisor in DPW’s Bureau of Engineering and Construction after the August incident.

Active in local politics, he is especially close to former Mayor Sheila Dixon.

Following his arrest, Brown resigned from his position as president of the Marble Hill Community Association, where he was described by some as a divisive and occasionally pugnacious figure.

Asked about the part of the police report that had Brown arguing with and threatening a DPW colleague, Garcia said police “checked that out and there was nothing to it.”

The person making those allegations “was not named as a victim or even a witness,” Garcia said, indicating in his view that “they obviously had no credibility.”

“Baltimore will see more of Mr. Brown. He plans to keep giving back to his community”   – Tony Garcia.

Garcia acknowledged that his client was not acting as a private investigator at the time he brought the pistol into his workplace. (“It was a mistake – he could have left it in the car.”)

But he said his client plans to work as a private investigator full time, now that he’s left city government.

Brown also will remain active “as a proud member of Omega Psi Phi,” Garcia said, pointing to his client’s involvement in the 110-year-old fraternity that counts Baltimore City Council President Nick Mosby and other prominent local figures as members.

“Baltimore will see more of Mr. Brown,” Garcia promised. “He plans to keep giving back to his community.”