Back in December, when the Baltimore Teachers Union asked for five days of virtual learning in January to better prepare for the surging omicron variant, there were already two dozen schools operating virtually due to virus outbreaks.

“A school-by-school, wait-and-see approach creates crises in schools and confusion across the district,” BTU president Diamonté Brown said at the time.

But City Schools rejected the union’s proposal, which included a “results to return” policy requiring all students and staff to produce a negative Covid-19 test before returning to their school building.

Citing the learning loss and other harms attributed to keeping students at home, the administration stuck to its schedule – staff and students were to return today.

By mid-morning on the first day of the new semester:

• One school was officially listed as virtual – National Academy Foundation in East Baltimore, which will be out today and tomorrow.

• Individual classes at eight city schools were told to stay home, district officials said. (This does not include special education classes.)

At Mount Washington, “the 7th and 8th grades will be out until January 14,” a knowledgeable source told The Brew.

Some teachers were on social media, meanwhile, reporting half-empty classes and classroom air filters that had not been replaced over the break. 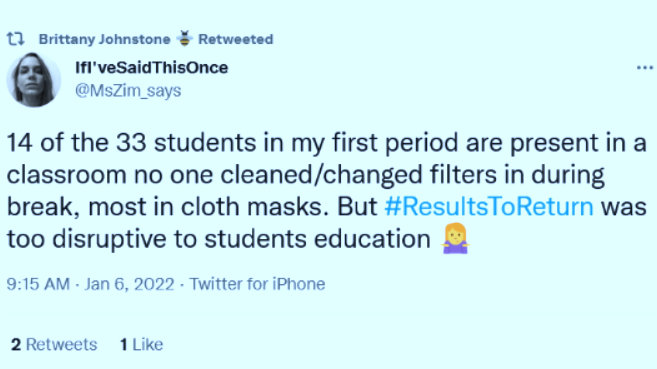 School officials previously said that filters were to be cleaned over the break, but a spokesman acknowledged “a few instances where it appears the tech did not reset the device afterward.”

“Our Operations Team is reminding the techs to do so in the future,” executive director of communications André Riley said.

Riley said he was researching reports of poor attendance from district staff.

“I’m not sure how anyone without direct access to district-wide data would know that,” he observed. (He said he will not have attendance figures until the end of the day.) 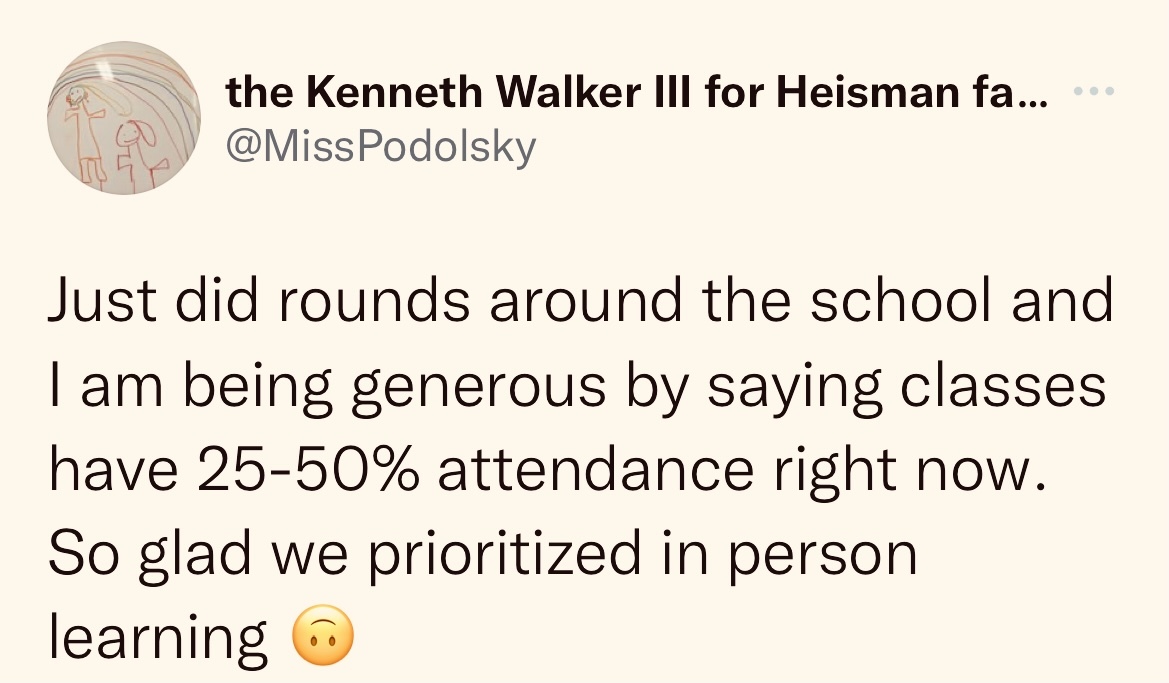 There had been some talk online of a sickout on the first day back from the break. But Maryland law prohibits teachers from striking, and it was clear today that nothing was happening here on the scale of what occurred in Chicago.

The labor union there, in an effort to force a switch to remote learning, voted to stay home from classrooms on Wednesday. The city responded by calling off instruction altogether.

The campaign kicked off with the donation of 13,000 N95 masks from the nonprofit, Baltimore CONNECT, and the Johns Hopkins program, Medicine for the Greater Good.

The coalition also pledged to advocate for better ventilation in schools, more test availability and more students and community members to be vaccinated.

“We know that N95 and other high filtration masks work better at preventing the spread than regular cloth masks,” Cohen said. “That’s why this [personal protective equipment] drive is so critically important. We need high quality equipment, and we need people to get vaccinated.”

Juengel said she and many classmates stayed home from school before the winter break and that she didn’t plan to attend classes this week because “the imminent fear of getting sick remains.”

Larry Simmons, president of the Parent Community Advisory Board, said Covid-19 tests should be required for all students unless a parent signs an opt-out form. (Right now the system is opt-in.)

“We have testing consent rates well below 50% in some schools,” Simmons said.

City College literature teacher Amber Phelps said the rise of the omicron variant late last year was a huge setback for her students.

“Students aren’t learning when they are wearing winter coats in classrooms as windows are flung open in the middle of winter because of our antiquated buildings,” Phelps added. 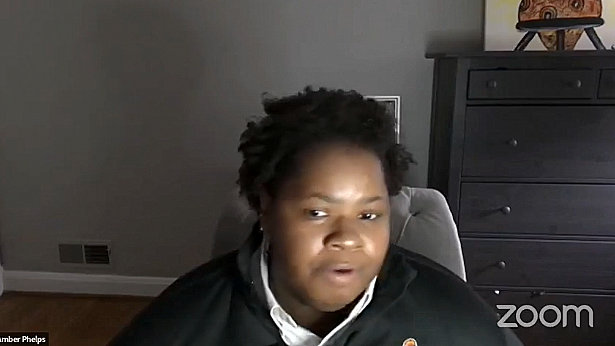 Parents who have called in recently to Kaye Whitehead’s show on WEAA 89.5FM have overwhelmingly shared those same safety concerns.

“They didn’t think a week or two of virtual, just until they get this omicron situation settled down, would cause a huge problem with their children’s learning,” Whitehead told The Brew. “But, of course, they’re torn because being with their children means for many missing work.”

The new masks from the city “are amazing,” Corey Gaber, BTU executive board vice president, said at yesterday’s press conference. But with 78,000 students and 8,500 teachers and staff in the Baltimore system, many more masks will be needed.

“That’s about one mask for everyone in City Schools,” he said. “At most [a mask] can last one week.”

Baltimore “is experiencing the highest number of hospitalizations since the start of the pandemic”  – Health Commissioner Letitia Dzirasa.

All this comes in the context of a record-breaking surge.

“As of January 3, the city’s hospitals were at 86% capacity in the ICU’s and 88% capacity in acute care units,” Health Commissioner Letitia Dzirasa said during her appearance with Scott.

“This is a 170% increase over the past two weeks, and the highest number of total hospitalizations we have seen since the start of the pandemic,” Dzirasa said.

She pointed to another troubling trend, mirroring a phenomenon she said was being seen nationally.

“Baltimore City is experiencing notable increases in pediatric hospitalizations due to Covid 19,” she said.

Two dozen states, including Maryland, recently reported to the Centers for Disease Control and Prevention an increase in pediatric hospitalizations – that is, children 17 and younger.

“Right now, the dominant cause of symptoms that look like cold is probably covid,” Dr. Aaron Milstone, professor of pediatrics at the Johns Hopkins School of Medicine, told the Washington Post.