For months, recycling has not been picked up regularly in many Baltimore neighborhoods, sending residents to the curb to drag the material back inside and to the Internet to try to figure out when they can expect the trucks to return.

Yesterday, City Councilman Isaac “Yitzy” Schleifer sounded off about the situation in a message to constituents, calling the spotty service “unacceptable.”

“I have been in contact with DPW for months, pushing for a plan to address this ongoing collection issue,” Schleifer said on social media. “I am in contact with the director of DPW and will be calling for a hearing on this matter ASAP.”

“This has been an ongoing issue and NOT specific to this current surge in Covid cases,” he added.

The spike in Covid-19 infections, however, is the main factor the Department of Public Works has cited to explain the recent surge in missed pick-ups.

“It is simply more cases than ever before,” said James E. Bentley II, communications director. “It has drastically limited our workforce, and we have had to pull workers from all over Solid Waste to assist.”

Bentley also observed that the holiday season tends to generate more waste, “which means that drastically reduced numbers of workers were having to collect significantly more trash and recycling.”

DPW’s Solid Waste Division “has long had limited staffing,” and has been impacted by Covid-19, “possibly more than any other city service,” Bentley said in an email to The Brew.

He also blamed pick-up delays on “the shortage in testing and in obtaining results after contact tracing.”

“As people who have been exposed must be tested before returning to work, the delays in obtaining tests and results have been very concerning,” he said.

He further cited the recent snowfall, noting that in times of bad weather, solid waste crews “are tasked with clearing over 20 snow routes,” pulling them away from other duties.

DPW’s social media documents the history of recycling service interruptions, with updates issued that go back to last October. For example:

These updates were interspersed with posts about the distribution of the new blue 65-gallon recycling carts, for which the city allocated $7.9 million in June. 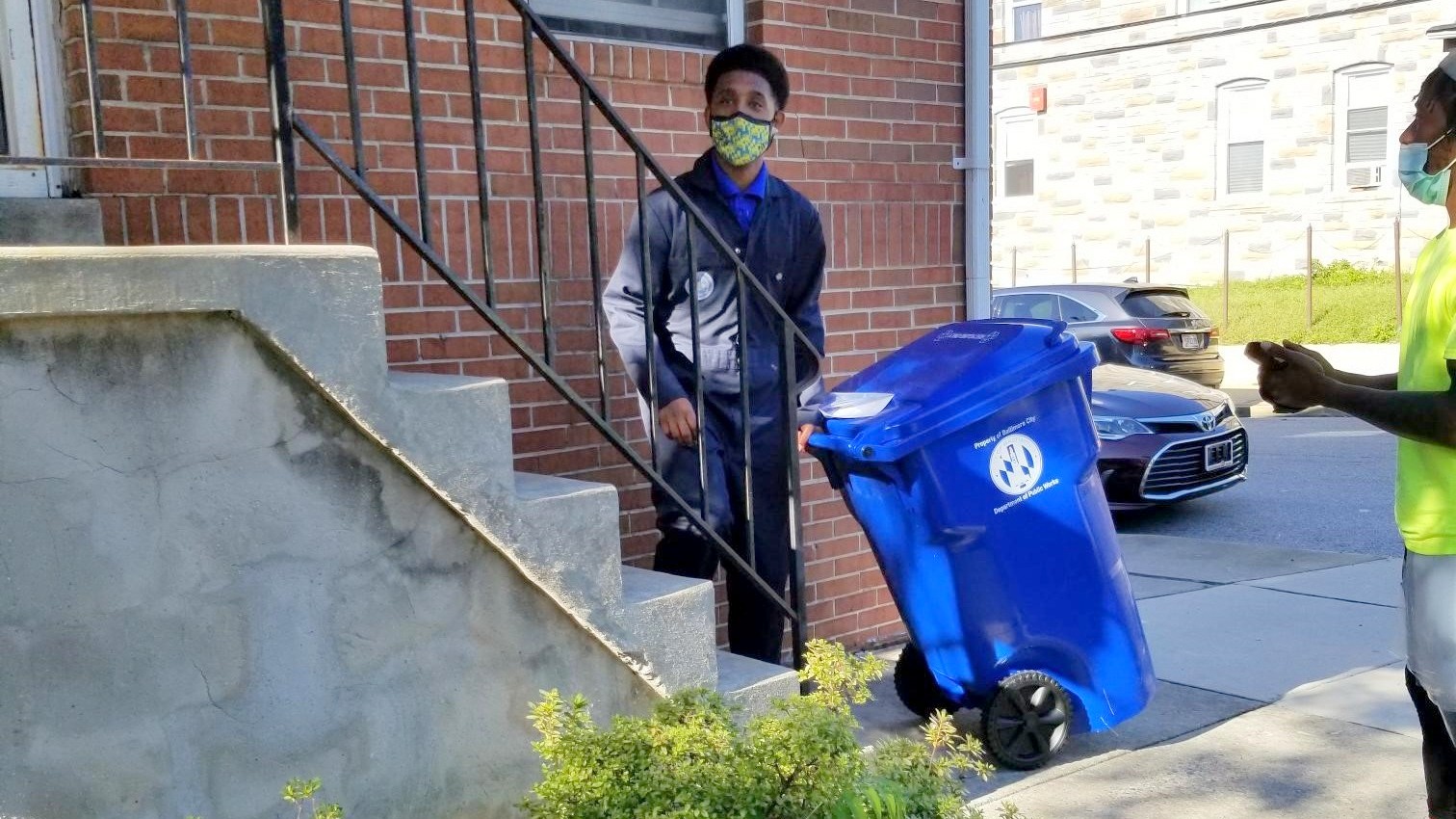 Mayor Brandon Scott wheels one of the new recycling carts up to a Baltimore rowhouse. (Facebook)

Scott announced soon after taking office that 200,000 carts were on the way, subsidized in part by the Recycling Partnership, which is funded by the American Beverage Association and companies like Coca Cola and Amazon.

On December 27, there was an announcement that DPW had shut down the walk-in center at the Abel Wolman building.

“All DPW employees in the walk-in center will be working remotely due to the COVID safety protocols,” the notice said.

The following day, the agency said that the walk-in center, where people can go to pay or contest water bills and discuss other DPW matters, would be closed until January 11, 2022.

Those with water billing inquiries were told to contact DPW by phone at (410) 396-5398, by email at dpw.billing@baltimorecity.gov, or to go to the Water and Waste Water Billing Information page on the website.

The Wolman Building is located next to City Hall, which has been closed to the public over the entirety of Mayor Scott’s administration (he was sworn into office on December 8, 2020), Covid-19 cited as the reason.

Months-long suspensions of recycling service have been a headache for residents throughout the pandemic and generated questions about DPW’s response.

The latest notice says crews will be out today (January 8) to pick up recycling that has been backing up in a number of neighborhoods:

The reaction from frustrated residents whose neighborhoods are not on today’s list indicates the challenges that remain for DPW and the Scott administration. 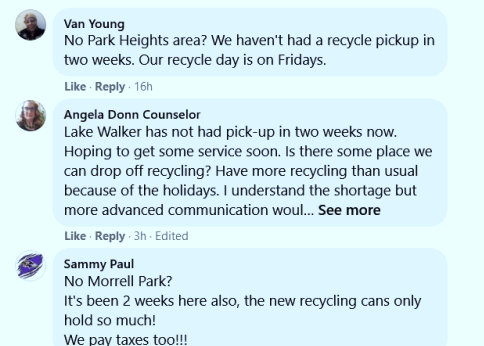 Asked what DPW is doing to address the situation, spokesman Bentley answered this way:

“We are diligently working with the administration to expedite Covid testing to help get workers who are negative back to work, pulling employees from other solid waste services to focus solely on routine trash and recycling collection, constantly looking for contractors to help with collections efforts.”