When a Baltimore school is put on the list to be closed, the major reason typically cited is small size and declining enrollment. That was the case for Eutaw-Marshburn Elementary School, slated to be shuttered at the end of the school year.

But to Kari Fulton, the mother of a 3rd grader, the school’s smallness has been one of its great strengths during the pandemic, allowing the staff to really know and look out for her and her son, even when classes were virtual.

“It’s a place where everyone can find familiar faces that care about their development and well-being,” Fulton said yesterday at a rally to save Eutaw-Marshburn, located in the Upton neighborhood, and two other city schools slated for closure.

“I’d worry about what would have happened if it wasn’t a small school,” Fulton told The Brew.

Many speakers said that, while their school may be small, the network of community members, churches and other organizations supporting its students and families, within walking distance of their homes, is huge.

Dr. Bernard S. Harris Sr. Elementary School in Oliver, also set to be shut down, “is so much more than a school,” said longtime community leader Audrey Carter.

“It’s a resource hub where we’ve had a PTO, after-school programs, a food distribution site and parent job and information resources,” Carter told the crowd, assembled in front of City Schools headquarters on North Avenue. “It functions like a family.” 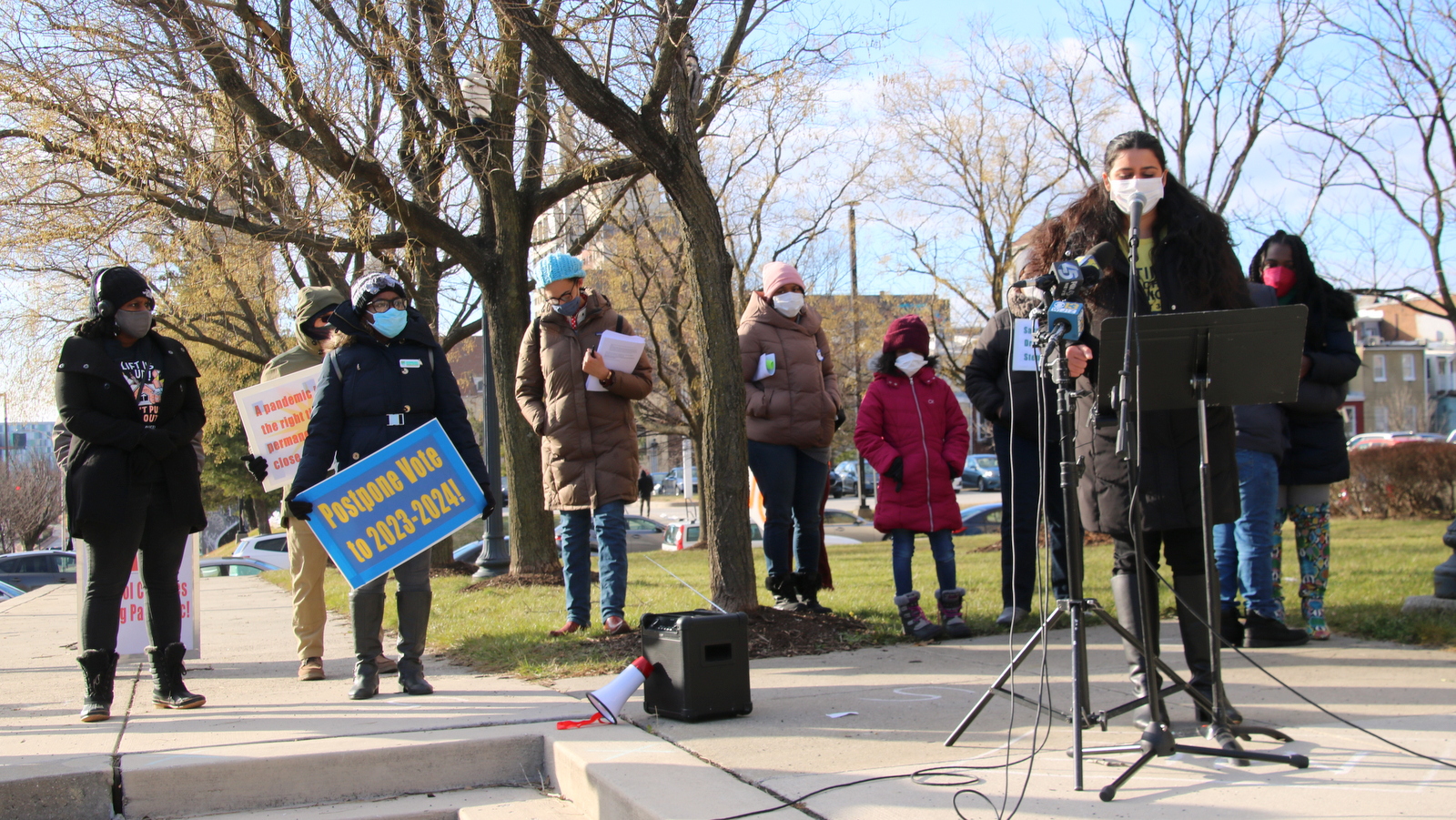 Te’Auna Sanders had come to the rally on behalf of Steuart Hill Academic Academy in Southwest Baltimore, which she described as a nurturing place for her little brother Tyler.

After their mother in West Virginia became ill and was unable to care for him, Tyler moved in 2020 to Baltimore, where Sanders became his legal guardian.

“With all of the personal trauma of leaving our mom and moving from West Virginia to Baltimore City,” she said, “Steuart Hill has been a solid rock in the height of Covid.”

“Hanging by a Thread”

Baltimore City Public Schools announced in November that it plans to close the three schools this year. (A high school, New Era Academy, in South Baltimore’s Cherry Hill, is to be shut down in 2023.)

A school board vote on the closures – originally set for today, but now rescheduled to January 25 – had alarmed supporters, who said there was not enough time to alert the community during the holidays and amid the surging rate of new Covid-19 infections.  Many residents lack internet connections, leaving them unable to access meetings held online-only.

“This news came as a profound shock to me and to the students and the community,” said Fareeha Waheed, a special education teacher at Eutaw-Marshburn.

Citing the pandemic, advocates are calling for the District to delay the closures for two years.

“This is not the time to do this,” said Waheed, noting that more than 500 people have signed a petition opposing the closures. “My school community is hanging on by a thread.”

District officials, however, argue the schools are too small to provide students with “robust and varied academic programming,” as Angela Alvarez, executive director of the Office of New Initiatives, put it in a presentation to the School Board in November.

The schools were described in a school system report as being underutilized and in poor physical condition. Steuart Hill, for instance, needs a new roof and floods periodically “due to a stream that runs under the building.” Dr. Bernard Harris “is a partially enclosed open space school with walls that do not go to the ceiling . . where sound is easily transmitted across spaces and there is little natural light.”

Eutaw Marshburn’s exterior “skin” is improperly insulated, causing leaks and would have to be completely replaced.

Waheed notes that there was no capital improvement work done on that building between 1970 and 2015. She and others argue that under-investment is to blame for the schools’ decline.

“The city is putting [in place] a permanent reaction to the low enrollment and poor building quality that the city itself has caused,” Sowebo resident Mia Richenbach said last month, at an online hearing about the closures, where she was speaking on behalf of Steuart Hill.

Disinvestment in city schools “has been going on for decades,” Senator Cory McCray told the rally crowd, noting that his wife is a graduate of the Dr. Bernard Harris School, dubbed “Nifty 250” by locals. 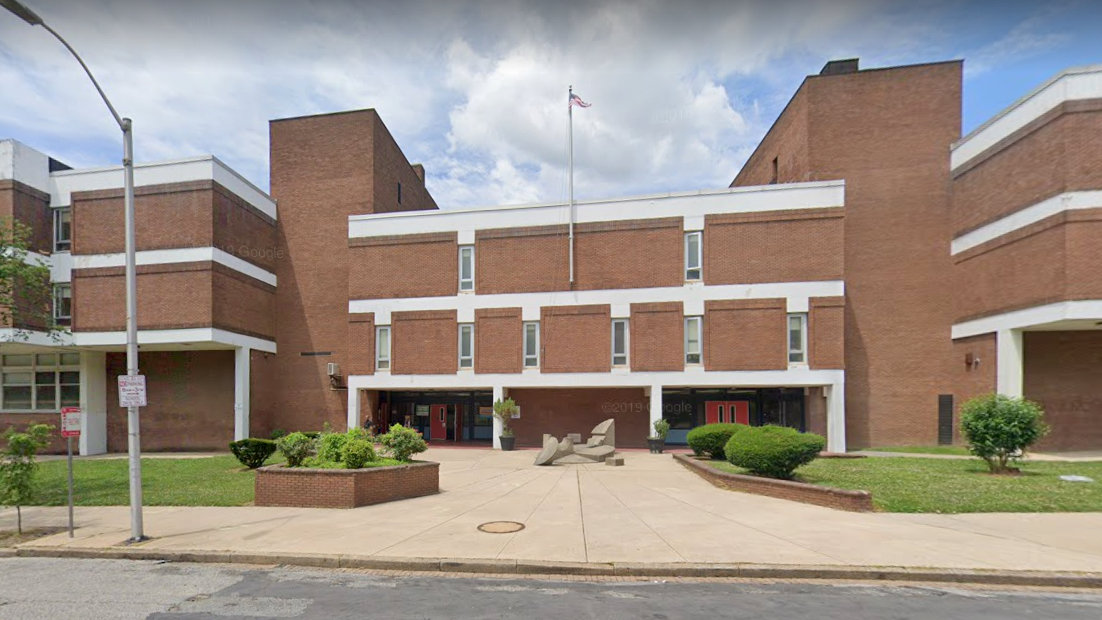 Advocates also said the closures run counter to redevelopment efforts in their neighborhoods that are seeing success.

“This area is actually growing,” City Councilman Eric Costello said, speaking at a hearing on behalf of Eutaw-Marshburn.

The closure plan “does not take into consideration places like Pedestal Gardens, a very large scale 210-unit affordable housing site scheduled to grow over the next five years, the Upton Gateway project four blocks away with 38 new town homes, and other development coming up and down Druid Hill Avenue,” Costello said.

Under the District’s plan, Costello also noted, Eutaw-Marshburn students would have to attend other city schools, requiring them to cross busy North Avenue and Pennsylvania Avenue.

“I’m a 41-year-old grown man and I’m scared to cross those streets because they’re raceways,” he observed.

Oliver resident James Cotton, who held up a sign at the rally, had the same concern about students who would be displaced from the Dr. Bernard Harris school.

“It’s not fair that they will have to walk a long way to different schools, that this city has no yellow school buses,” said Cotton, who said he makes his living trading stocks.

Cotton and said he volunteers to read to 2nd graders at the school through a program organized by BUILD, (Baltimoreans United in Leadership Development.) 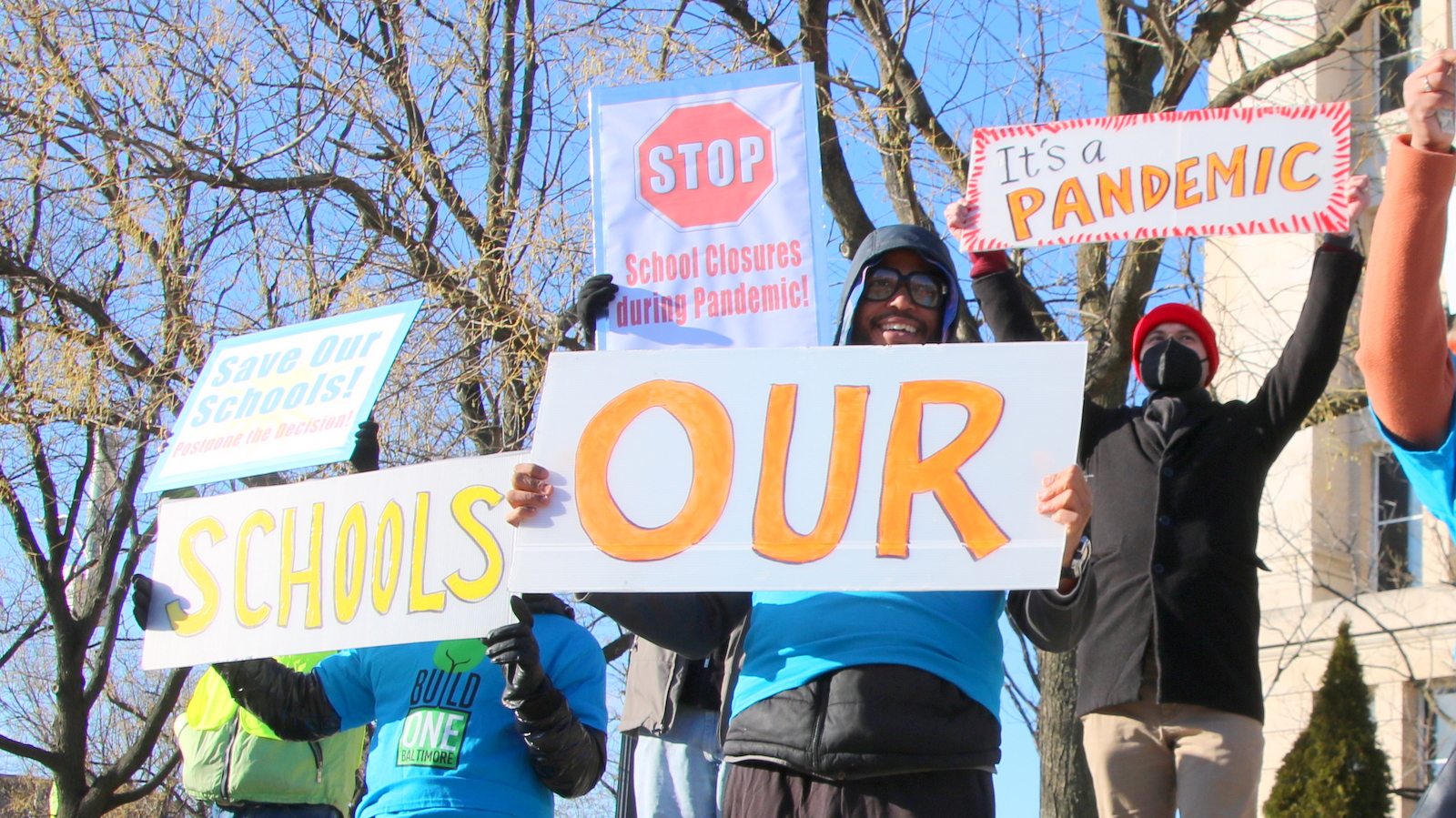 James Cotton (center) and other opponents of proposed school closures, at a rally in front of Baltimore City Schools headquarters. (Fern Shen)

The longtime clergy and community group was a major organizers of yesterday’s event.

BUILD and an affiliate, ReBUILD Metro, have invested more than $90 million in the East Baltimore communities of Oliver, Broadway East and Johnston Square communities, she said.

“As a result, these communities have seen a 38% increase in population, a 90% drop in housing vacancy and a 50% reduction in homicides over the past 10 years,” Reichelt told the rally crowd.

“These communities are on the rise and deserve an excellent neighborhood school,” she said, to cheers.

Why, with all this redevelopment, The Brew asked her, is the local public school seeing enrollment steadily shrink?

“If people are not coming to the school, we need to engage them and find out why. All these schools need improvement and investment,” said Reichelt.

“The goal is to keep them open and make them great schools – and people will come.”