A retired public corruption investigator has filed a complaint with the State Prosecutor against Ivan Bates, a candidate for Baltimore State’s Attorney, saying Bates “appears to have broken campaign finance laws by failing to disclose significant expenses on his campaign report.”

The effect of the alleged lapse is to artificially inflate what funds he has on hand, wrote James Cabezas, who spent three decades as Maryland’s chief investigator of public corruption, in a letter asking State Prosecutor Charlton T. Howard III to investigate. [A response from the Bates campaign is below.]

Cabezas noted that Bates, a Baltimore defense attorney who is running against indicted State’s Attorney Marilyn Mosby in the June Democratic primary, reported raising $233,707 in his most recent campaign report.

He had an unpaid loan of $125,000 owed to developer Jack Luetkemeyer, co-chairman of Continental Realty Corp. Bates reported making a personal loan of $128,000, which basically covered the loan repayment to Luetkemeyer.

“In other words, after repaying the loan to Mr. Luetkemeyer, without his personal loan, his campaign would only have had $97,982 to report,” Cabezas said.

While such loans are not unlawful, Cabezas noted, Bates failed to report expenses that were incurred by the campaign during the reporting period they were incurred.

Under Maryland law, expenses for salaries and compensation, as well as for fundraising expenses, must be reported in the period they are incurred. 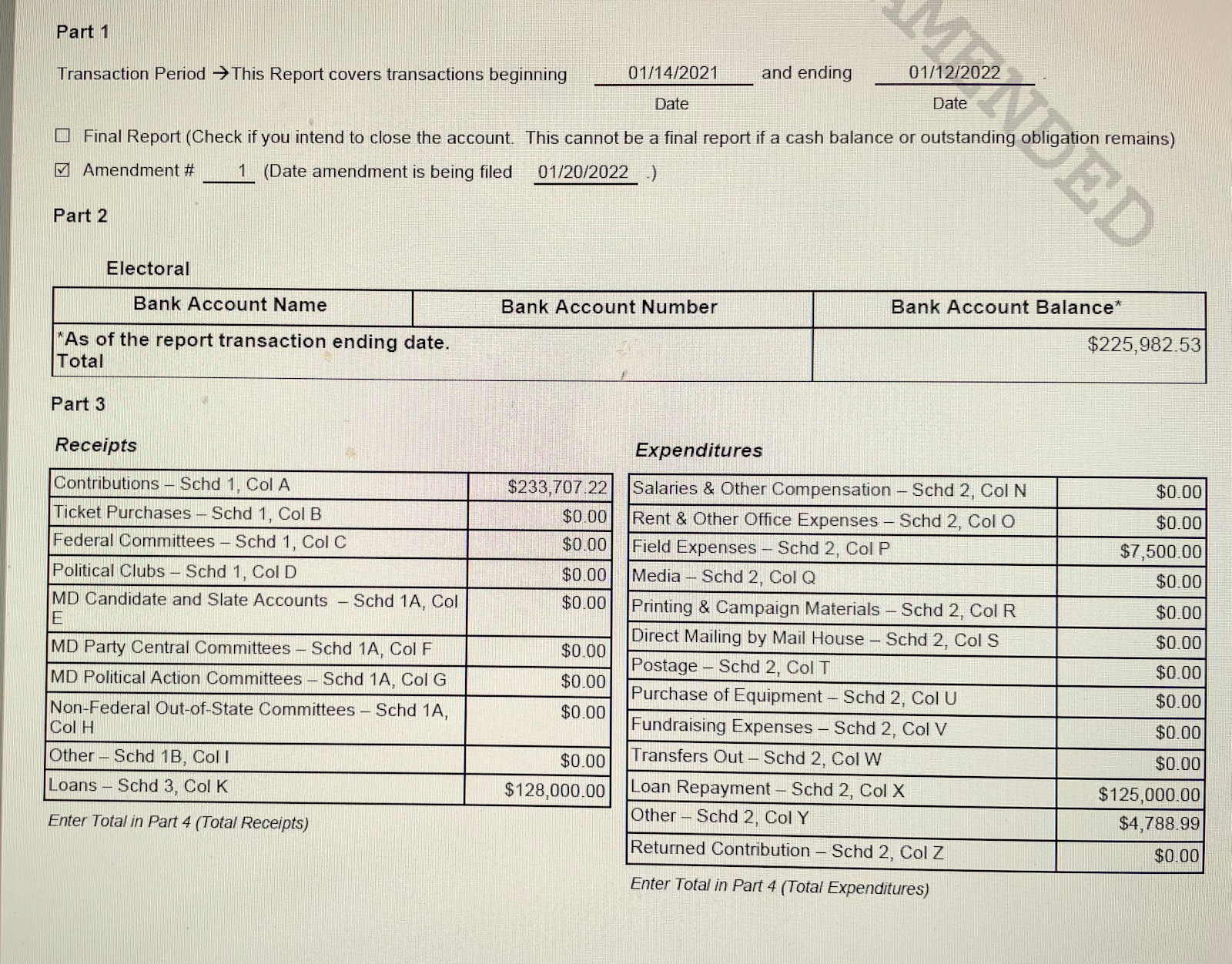 Bates: “I will not be distracted”

Bates, reached by The Brew, said he would read Cabezas’ letter and provide a response. His brief statement tonight does not address any of the charges. It reads in full:

“Ivan Bates is laser-focused on running a campaign that is centered on lowering crime and going after violent repeat offenders. He will not be distracted by political complaints that seek to divert voters attention from the violent crime and electing an experienced and ethical prosecutor.”

Nick Machado, deputy campaign manager for Bates, contacted The Brew to dispute a number in Cabezas’ letter, saying “our total was actually $361k raised, and we specifically discounted the loan.”

In his letter, Cabezas noted that Bates reported no fundraising expenses even though he held a December 7, 2021 event at The Bygone restaurant.

Included in Cabezas’ complaint was a copy of the invitation, in which donors were asked to send checks “c/o Rice Consulting” for the event, held at the Atlas Restaurant Group eatery at the Four Seasons in Harbor East.

Prominently noted on the invitation is that the event would feature “Special Guest Sheila Dixon,” the former Baltimore mayor who has endorsed Bates in his run to unseat incumbent Mosby.

Expenses for the event are listed nowhere on Bates’ campaign report. The report does list $12,000 in contributions by Atlas CEO Alex Smith and his wife, Christina Ghani. 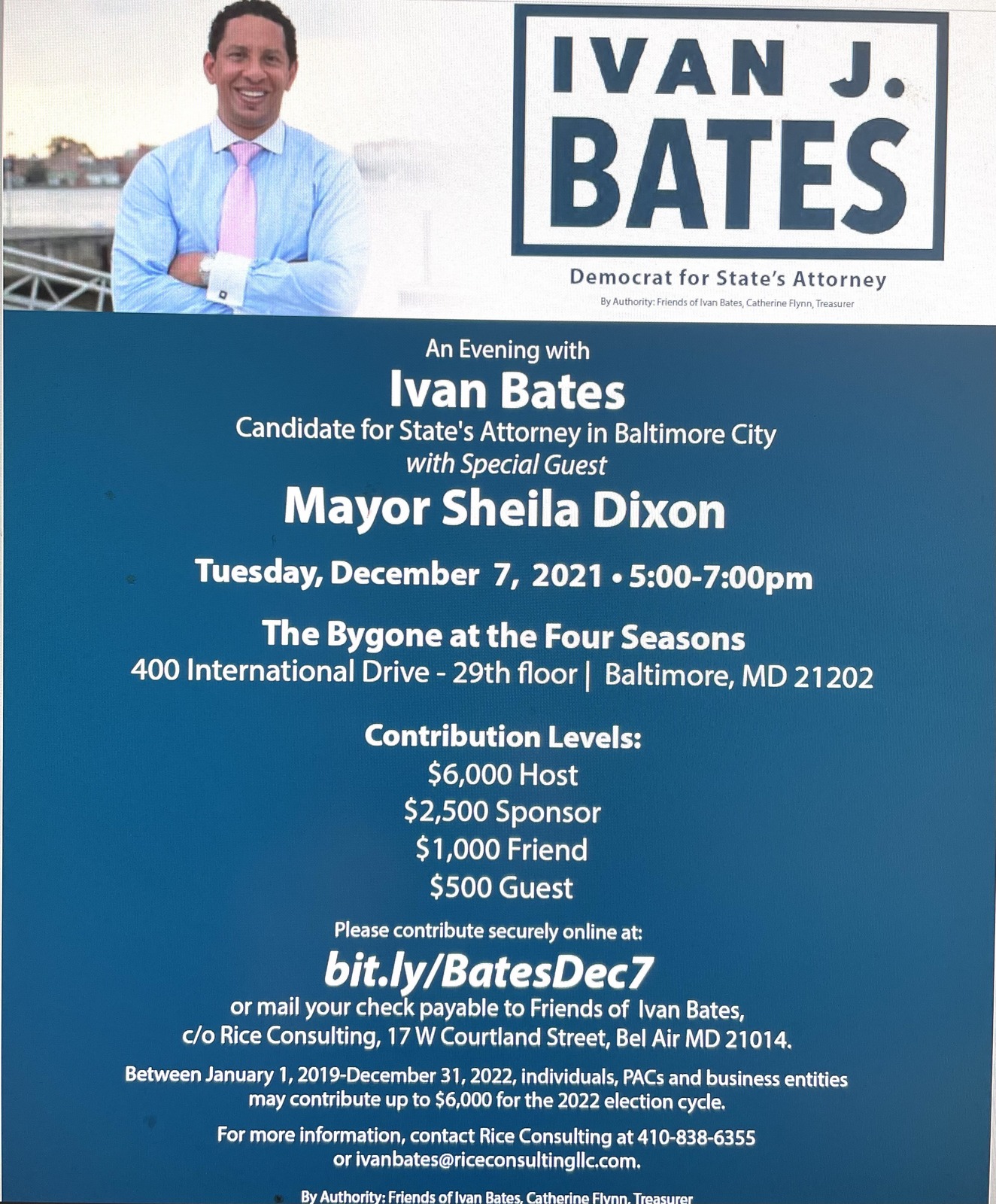 Cabezas also notes that the costs of fundraiser Rachael Rice – typically sizable – were not disclosed in Bates’ report, filed with the State Elections Board in January.

In another state’s attorney’s race, Rice Consulting was the fundraiser for candidate Charles Curlett. In that campaign, Cabezas said, Curlett reported paying Rice $14,398 in fees for October 2016, December 2016, and January 2017.

Is Scott aide the Campaign Manager?

Also mentioned in Cabezas’ letter is Marvin James, who served as Bates’ campaign manager in his unsuccessful 2018 run for state’s attorney.

“Assuming Mr. James is performing this role again, it would be illegal to fail to report these significant expenses,” Cabezas wrote.

Bates’ campaign report does not list any salary cost for James, although James’ name does appear in a February 2021 reimbursement of $2,237.04 by the campaign, apparently in connection with a Belair Road storage center.

James is currently listed as working in an $82,000-a-year position in the office of Mayor Brandon Scott, whose successful mayoral campaign James managed in 2020. Cabezas’ letter describes James as “a senior advisor and deputy mayor.”

“Declining to report those expenses to avoid publicizing this connection is also unlawful,” Cabezas noted in his letter to prosecutor Howard.

James did not return voicemail messages left for him tonight.

Machado, meanwhile, texted to say that “Marvin James is not the campaign manager of this race.”

Asked if James is providing any service to the campaign, Machado, listed as Bates’ deputy campaign manager, has not replied.