The inspector general found that 40 emails were sent to constituents over the last year by Jones’ office containing a “Donate” button that, when selected, took the recipient to his campaign website.

There the recipient was invited to donate between $100 to $6,000 to Citizens for Julian E. Jones Jr., his campaign committee.

A Democrat from Woodstock, Jones is running unopposed in 2022 for his third term in the county’s northwest 4th District.

Questioned about the emails, Jones told Madigan that sometime last April, his “campaign template” was inadvertently selected by someone – perhaps himself or a legislative aide or unpaid volunteers – for his constituent-related emails.

Over the next 10 months, the template was used in newsletters and bulletins because the original email had been saved by the system.

“Consequently,” said Madigan’s summary of her interview with Jones, “the ‘Donate’ button was accidentally embedded toward the end of the email that was sent from the shared [Baltimore County] email address to constituents.” 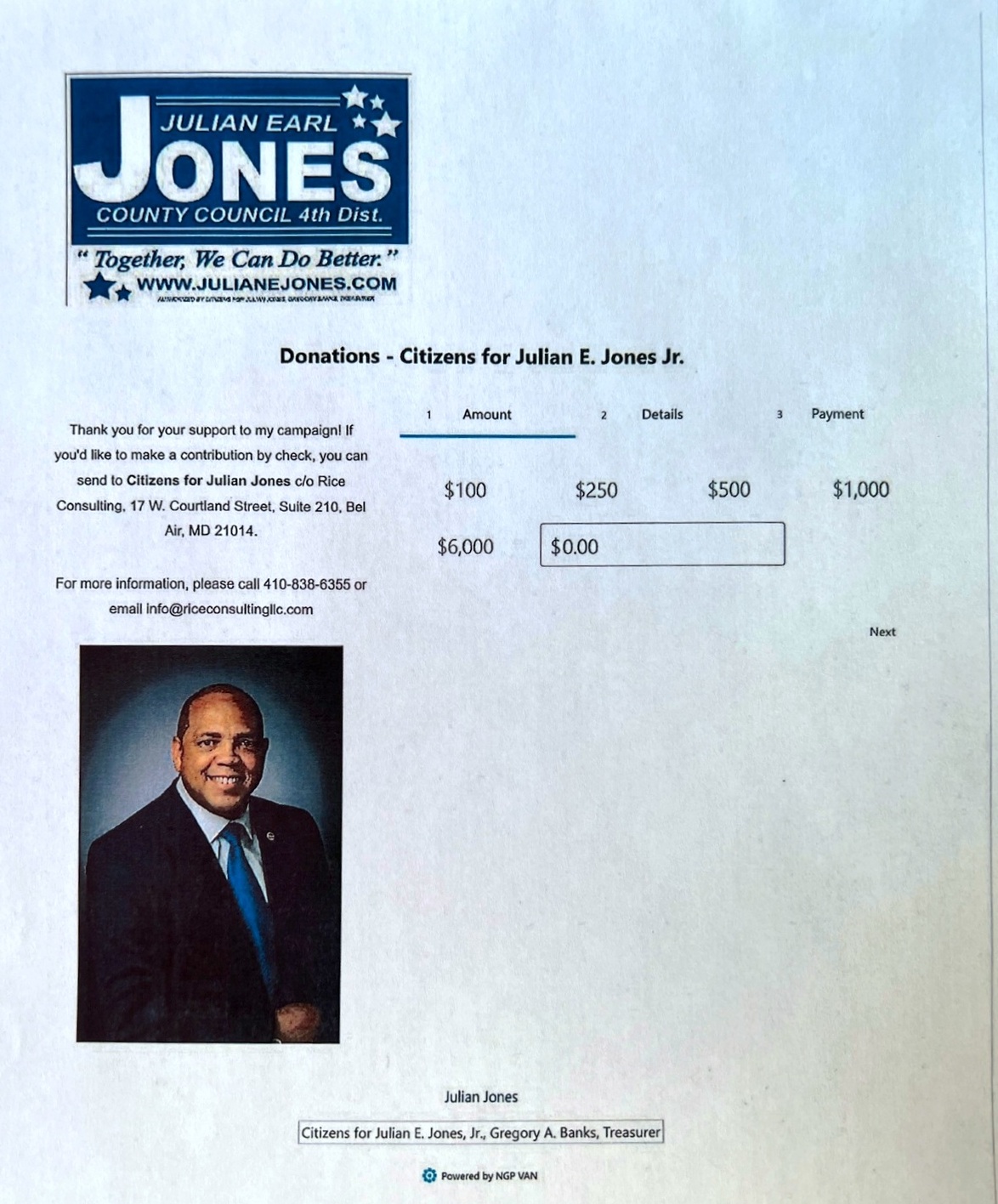 When the button was touched, up popped this solicitation for money, care of his fundraiser, Rice Consulting. (OIG Report 22-008)

Jones said the only way to have known the “Donate” button had been included in the emails was if a member of his office had selected the preview option prior to sending the emails or his office had been notified by a constituent.

Neither of these conditions happened, Jones said.

Last December, Madigan’s office received a complaint that a member of the council was sending campaign-related emails from a Baltimore County email address.

When notified of her inquiry in late January, Jones took immediate steps to correct the problem.

Madigan said that while the emails “may have constituted violations of the county’s electronic communications policy, it does not appear the violations were done intentionally based on the explanation provided by the council member.” 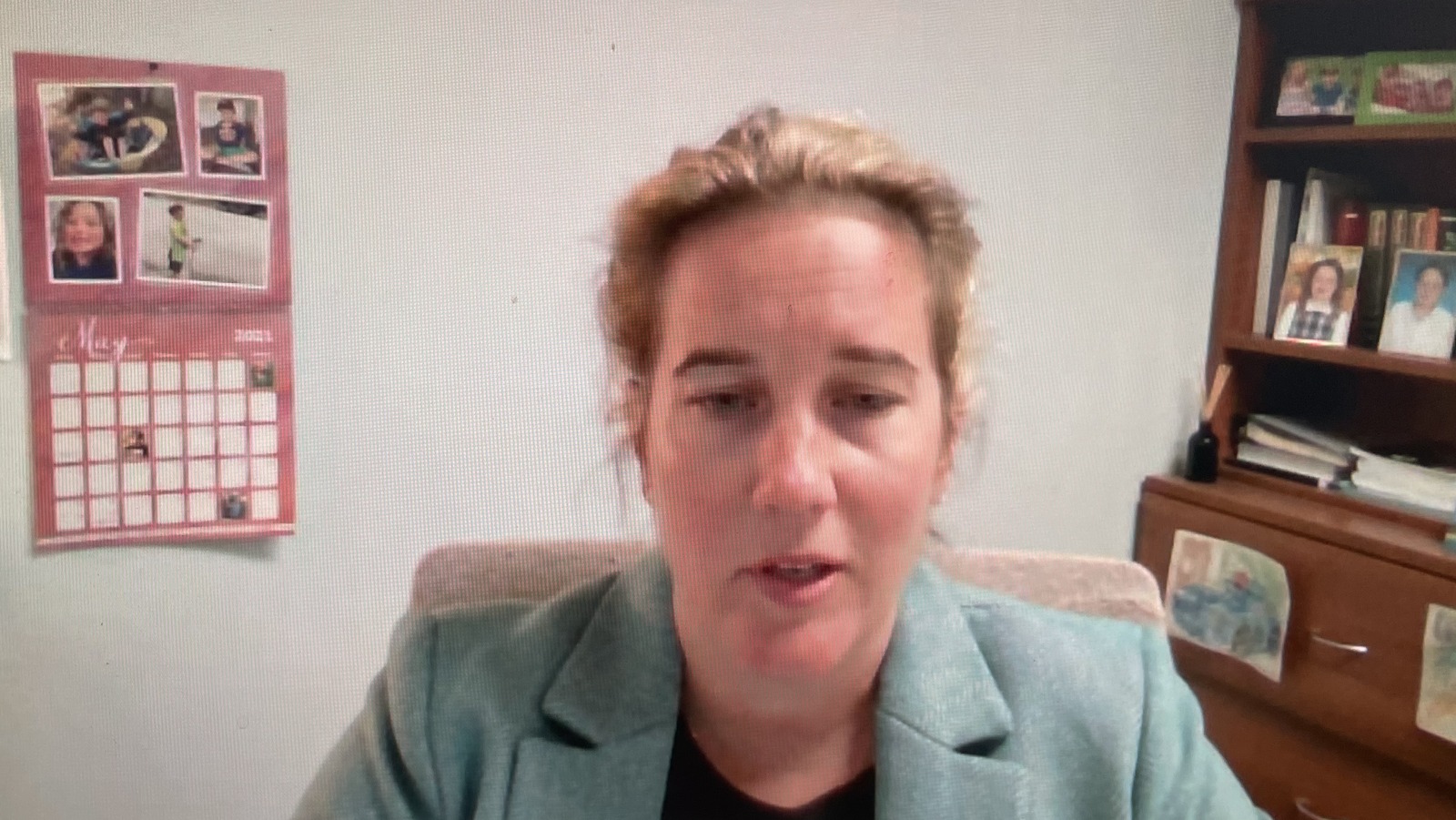 Despite the conciliatory tone of the report, Jones took offense when he received an advanced copy.

Over the weekend, he penned a three-page rebuttal to Madgian questioning “the nature and tenor” of her investigation.

“Perhaps in this ‘gotcha’ environment, a more benign response from your office was not to be expected or even considered,” he wrote.

Echoing his complaints of last May, when he told Madigan that county employees “were scared to death” that “you’re going to take a molehill and make a mountain,” Jones said she would have been better served to have resolved the matter privately with him rather than issuing a public report.

“I do believe it would have been more constructive and productive to simply communicate the problem sooner rather than later as to what had occurred so it could be quickly rectified.”

“We are not subject to discipline in the same manner as other county employees”  – Julian Jones.

Jones added that he “is not a county employee in the conventional sense” and “it is not exactly clear how a council member fits into the applicability of the electronic communications policy.”

Madigan replied that Article 4 of the County Code does not exclude elected officials as county employees and the electronic communications policy specifically applies to all employees.

She said her office conducted the investigation “in an objective, thorough and professional manner,” which included giving Jones an opportunity to explain his version of what had transpired and clearly detailing his version of the events.

Because there is no written policies regarding the use by elected officials of county resources for campaign-related activities – other than a blanket prohibition of such activities – Madigan recommended that the County Council adopt a formal set of policies and procedures.

In his rebuttal, Jones, the Council chairman, made it clear he has no intention to do so.

“First and foremost, we are accountable to the people who elected us and placed us in office – the voters,” he wrote.

“We are not supervisory or management employees. We are not part of a union. We do not have supervisors, and we are not subject to discipline in the same manner as other county employees.”