Walking through the rowhouse neighborhoods of West Baltimore with his campaign team, Ivan Bates’ first task seems to be distinguishing himself from his two opponents in the race for state’s attorney.

“I’m Ivan Bates, I’m running against Marilyn Mosby ’cause we need a change” was his default greeting to the people he encountered along Edmondson Avenue yesterday.

Some recognized him, others didn’t. None disputed the need for change, though a few wanted to get into it with him.

“All he wants to do is lock everybody up!” one man said to former Mayor Sheila Dixon, who supports Bates and was campaigning alongside him.

“You’re thinking of the other one, the one from Fox,” Bates said, referring to candidate Thiru Vignarajah, who gets frequent coverage from Fox45, the local Fox affiliate.

Others on the avenue had different priorities.

“I don’t care for Marilyn Mosby’s antics,” said Deborah Colvin, who was picking up trash at the corner of Allendale Street.

“The local drug dealers have no fear. They are right up in your face,” Colvin said unprompted. “I don’t understand what she thinks she’s doing, but it’s not working.”

Bates, who is vying a second time for the job of the city’s top prosecutor after coming in second in 2018, says he can win both these types of voters with an approach that integrates their concerns.

That’s as long as he can get his message out.

“We have been going to neighborhoods all over the city. I have to do it,” said the 53-year-old, upbeat in spite of a hacking cough.

“I’m not the Fox guy. I’m not the incumbent state’s attorney with a ready-made platform to give her visibility. I’m the grassroots guy!”

Can I take a picture with you?”

Bates and his opponents have a long time to campaign ahead of the unusually late Maryland Democratic primary, scheduled for July 19.

Among them was Marvin Sydnor, a retired homicide detective with 35 years at the BPD, who said he doesn’t know Mosby, but knows that the assistant state’s attorneys in her office “aren’t happy” and that the office is not working well with BPD right now.

“In my day, we were friends with the prosecutors,” Sydnor remarked.

Bates, he said, has the right temperament to lead the office and, as a defense attorney, a more common touch with citizens: “Ivan’s not ‘up here and the people are ‘down there – he’s with the people.”

Still, there were celebrities in the crowd, including Sean W. Ryal, the actor who plays Bates in the HBO limited series, “We Own This City” about the Gun Trace Task Force that will start streaming tomorrow.

“We actually became friends,” said Bates, who defended victims of the corrupt Baltimore Police unit depicted in the show. 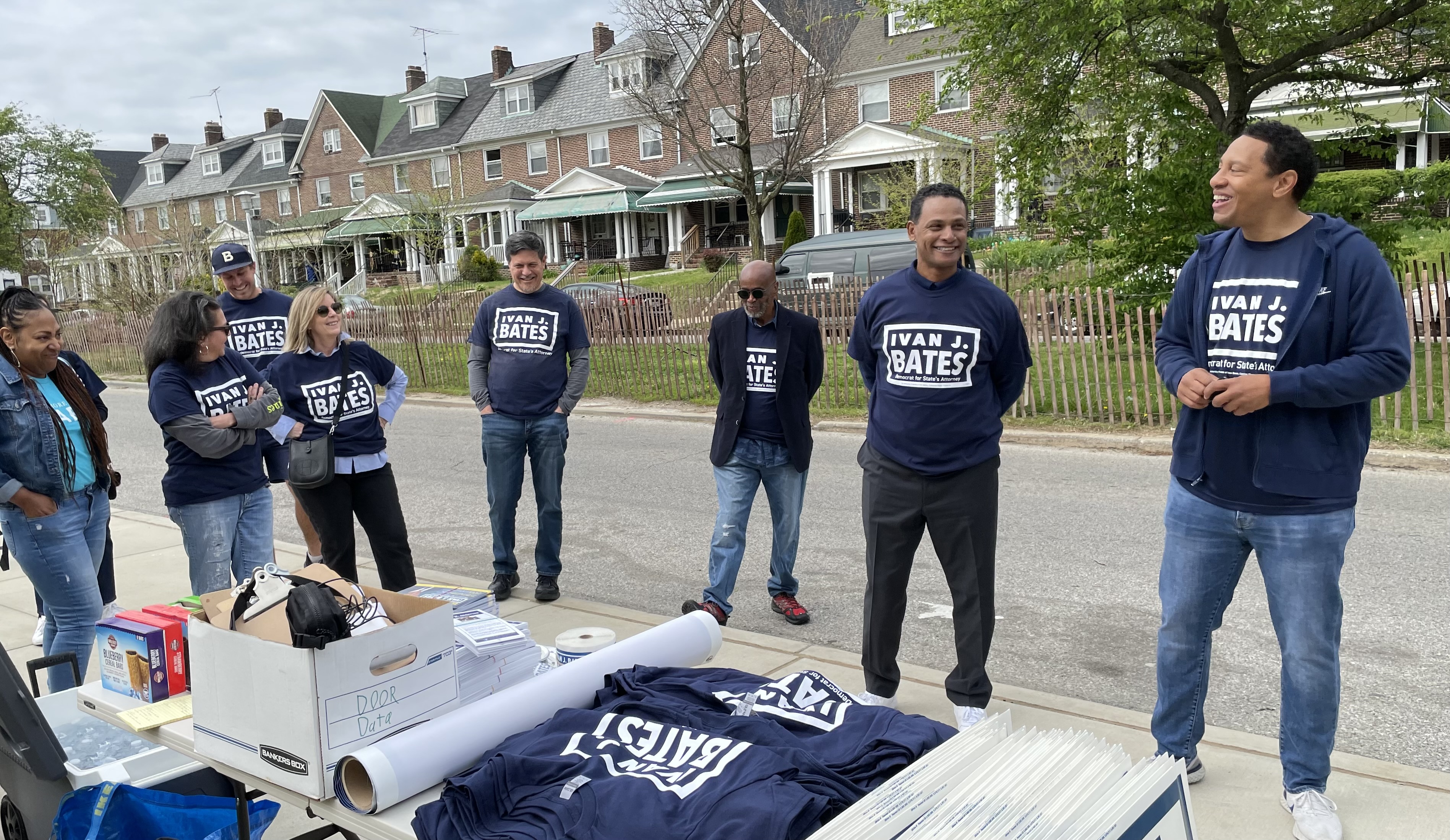 The bigger celebrity in this part of town, however, was Dixon, who resigned in 2009 after being convicted of stealing gift cards but, seen as an effective mayor, remains popular.

“I wasn’t going to get involved in this race, but looking at what’s going on, it seems for the last eight years like there’s been a disconnect, like all the elements of public safety are not working together,” she said.

“Marilyn is a wonderful person and a wonderful mother, but I don’t support her policies of ignoring the low-level crime,” Dixon continued, adding, “I’m not saying lock our way out of it. I was never that.”

Walking with the candidate, Dixon was the magnet, prompting many to come up and say, as one man did, “When are you coming back? Can I take a picture with you?”

“Only if you get rid of that cigarette,” she told the man. “Those things are bad for you!” 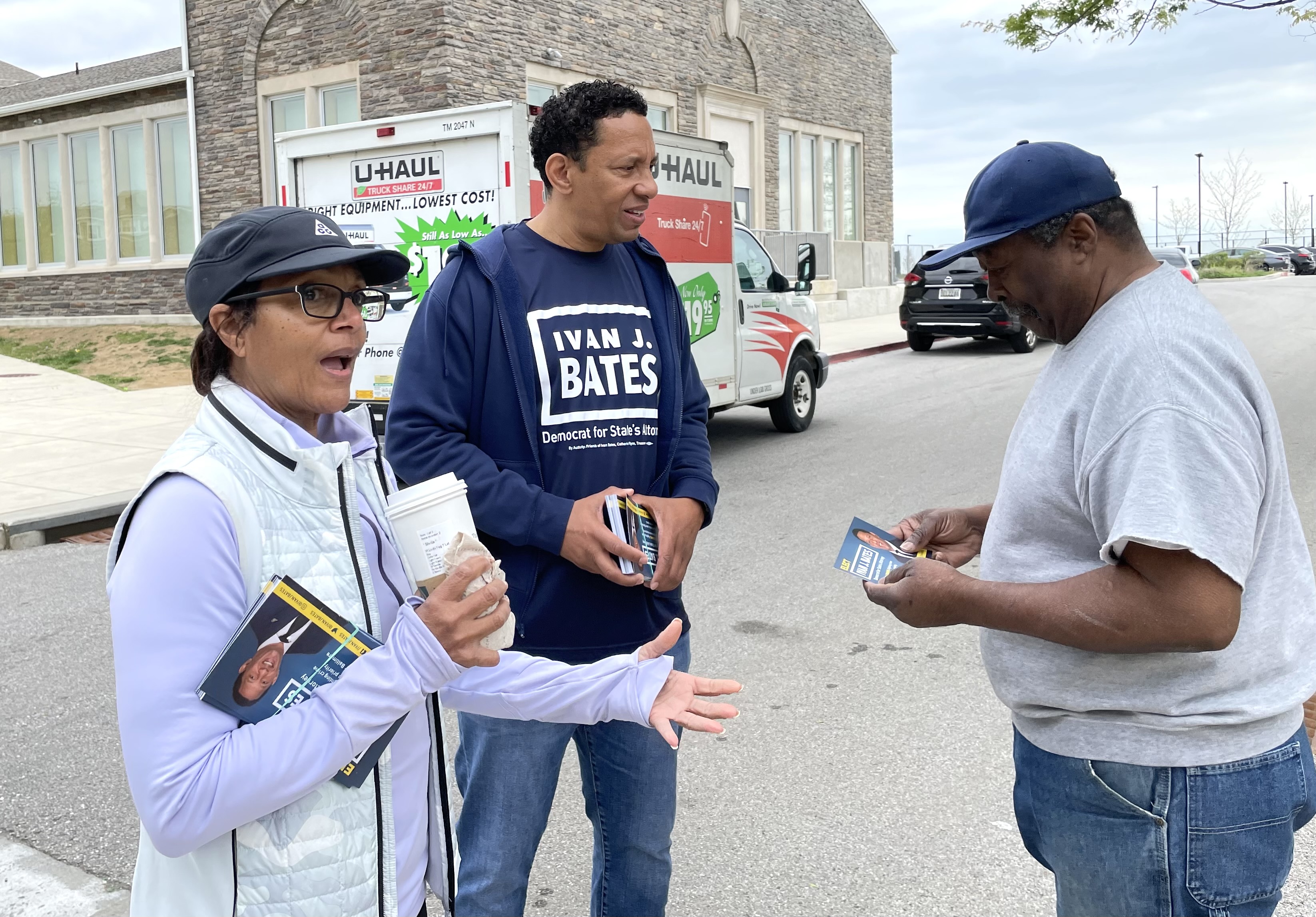 Bates’s plan to reduce violent crime in the city – which has already seen more than 100 homicides this year – includes tougher gun prosecution, better law enforcement cooperation and other policies to “prioritize removing violent offenders from our communities.”

Bates would require people convicted of gun crimes to report to a police station every month instead of every six months under the city’s Gun Offender Registration Act.

While he promises to “support alternatives to incarceration,” Bates vows to resume the prosecution of “low-level” crimes that was discontinued by Mosby amid the Covid-19 pandemic.

That would be right in line with Colvin’s way of thinking.

Living in a home she bought in the community, Colvin, who is president of the Edgewood Neighborhood Improvement Association, said she believes people should be held accountable for “quality-of-life” crimes.

“Crime is a breeding ground for other crime. People around here have become desensitized to it”  – Deborah Colvin.

“I don’t want a child to see a crack bag on the way to school. I think older people should be able to sit on their porch and not be afraid,” she said.

“Crime is a breeding ground for other crime,” Colvin declared. “People around here have become desensitized to it.”

Is Bates the candidate for her?

“I don’t know. I’ll keep an eye out for him,” she said, looking up the street where the campaign volunteers could be seen crisscrossing Edmondson Avenue. 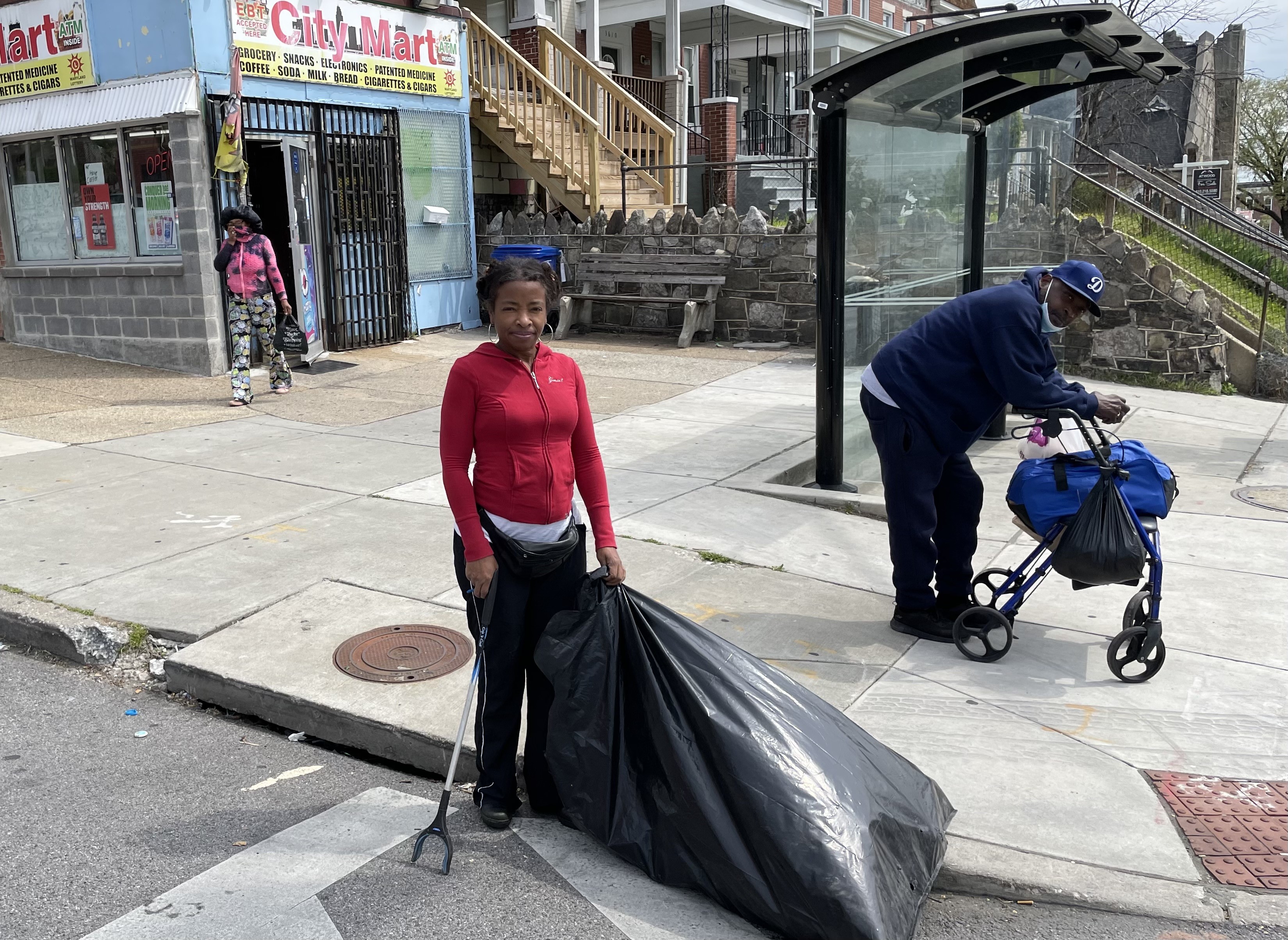 “I don’t want a child to see a crack bag on the way to school,” said Deborah Colvin, cleaning up on Allendale Street. (Fern Shen)

Bates tries to distinguish himself from Mosby, pointing out how homicides have risen consistently during her tenure, compared to her predecessor.

But what would his approach mean for the passerby who thought he was the candidate who “wants to lock everybody up?”

Bates tried to explain to the man how he sees arrests not just as punishment, but as an opportunity to divert people into jobs programs, education and therapy.

“I’m the one, remember, if you got a gun, I’ll sit you down for a second,” he told the man, who disclosed that he did have two gun arrests.

“Check this out, a lot of these kids can’t read or write, there’s no jobs or anything,” Bates said. “If you’re on probation, we can help you get a job and if you complete therapy and do everything else you have to do, we can give you a PBJ [probation before judgment] and expunge your record.”

“People with these gun charges, they can’t do anything else,” the man replied.

Speaking afterwards about this aspect of his plan, Bates said he would reach out to unions to better connect offenders to apprenticeship and job programs.

“These people don’t have hope. And when you give a dude hope, they want to change their life.”