On its website, the Neighborhood Assistance Corporation of America (NACA) touts its “aggressive advocacy.” At last night’s meeting of the City Council, its methods were on full display.

The tactics used by the Boston-based organization, enlisted by City Council President Nick Mosby to support his Dollar Homes bill, only served to doom the measure, several lawmakers said.

“No one’s mind was changed on Dollar Homes by this shameful display,” Councilman Zeke Cohen told The Brew afterwards.

“The bill is going to die – it’s all but dead,” said Councilwoman Odette Ramos, who was the target of a startling insult by the group’s leader.

That moment came after the group’s CEO, Bruce Marks, and scores of people he brought with him made their grand entrance, filling the Council chambers to standing-room-only capacity, chanting Mayor Brandon Scott’s name as the sound of banging and shouting could be heard elsewhere in City Hall.

In video posted to social media, Marks and some of his group were shown standing outside Scott’s office door, pounding on it.

Moments later, Marks began his testimony before the Council by alleging that the mayor – “bought and sold by the real estate industry,” he declared – was afraid to come out from behind “his metal door.”

“All these excuses we have heard from the administration are not real,” he said, calling a housing official’s testimony “bullshit.”

“If you follow the lead of President Mosby, this will set a national standard,” he continued, before warning the lawmakers to pay heed to the raucous crowd he brought with him.

“I want to make sure there’s not a riot outside,” he told them.

“You don’t even know”

Ramos was the first lawmaker to question Marks about aspects of the Mosby bill, a revival of a program from the 1970s in which city-owned houses were given away in return for homeowners renovating and living in them.

Firing back that his organization gets “the highest rating for any housing agency in the country” from the federal government, Marks quickly pivoted to attacking Ramos.

“I don’t understand why you’re doing the bidding for the real estate community out there. Or for the investors,” he said.

It was a strange accusation since Ramos is well known to be a longtime community and housing justice advocate in the city.

“Sir, you cannot accuse me of that! I have been working in this field for 30 years,” replied Ramos, clearly upset. “You’re not from here, sir. You don’t even know!”

Mosby (whose name Marks pronounced as Mahz-bee at one point) banged his gavel. Marks caused more head scratching when he said he had “700 people here today – residents of Boston.”

With the chambers now in an uproar, Mosby assured Marks that he had a right to address Ramos’ questions (“You purport yourself to be an amazing organization, you have a lot of members supporting you”), but called attacks on lawmakers and Mayor Scott “unacceptable.”

“I just want to let you know that the council member from the 14th district [Ramos] is one of the city’s foremost experts on affordable housing, and that the person you are personally insulting is deeply invested in this work,” Cohen told Marks.

And Marks’ earlier statement impugning Scott was also “outrageous,” Cohen continued before he was cut off by Mosby.

Dorsey later called Marks “a paid ringleader” and said he left the meeting because “I just decided it would be undignified to lend it the credibility of my presence.”

“This is an attempt to use an outside organization as AstroTurf advocacy for a bill that doesn’t make sense,” Dorsey said.

“The president should have banged his gavel and had [Marks] escorted out of the building,” Cohen added. 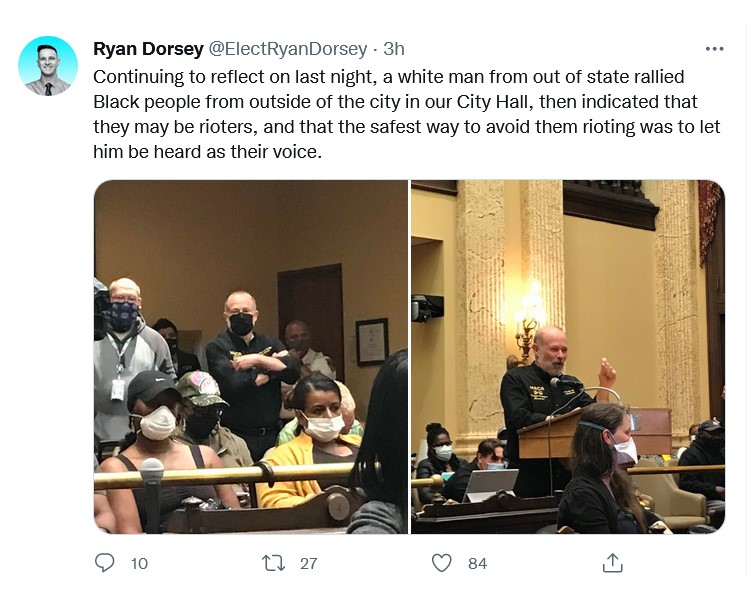 At a special Board of Estimates budget briefing today, Mosby apologized, saying, “Unfortunately, there were the actions of some that was completely disrespectful to the institution of the City Council.”

The subject that sparked these fireworks was legislation that has been opposed by city officials and garnered no support from local housing advocates, evoking comparisons to Mosby’s failed security deposit insurance legislation last year associated with a New York-based company, Rhino.

Unlike the earlier iteration of the Dollar House program, this one proposes to target longtime residents who have been renting rather than owning and those who live in underserved, historically redlined areas of the city.

Companion bills would award home repair grants up to $50,000 and offer assistance for older adults who have defaulted on reverse mortgages.

“Legislation is not easy, especially when we talk about legislation done in a very unconventional way,” Mosby said last night.

But council members and Housing Commissioner Alice Kennedy have raised concerns over the course of multiple hearings about many aspects of it, including the program’s eligibility requirements, which they say are complex and too difficult to enforce.

“Providing $50,000 for a house is not enough. You’re setting people up for failure,” resident Bill Gooden said during the public testimony portion of the meeting.

The Scott administration has also said that it does not have the funds or the staff to implement the program, which officials argue duplicates initiatives already underway.

Coming up for a key vote last month, the bill did not get out of committee. Meeting as “a committee of the whole,” the Council then deadlocked over the measure 7-7, with one member absent.

Last night, Mosby brought the measure back before another committee of the whole, but no vote was taken.

“We are working with Mosby”

A 34-year-old nonprofit, NACA enables borrowers to purchase a home with no down payment and closing costs. It is designed to make homeownership more affordable for people with limited funds and poor credit profiles.

While its role in the current legislation is unclear – Mosby says the group is not connected with his bill – its actions were clearly coordinated with the Council President’s office.

Earlier in the day, Mosby invited the media to join him for a press conference in a City Hall meeting room where he and Marks addressed the crowd.

In an email obtained by The Brew, NACA participants were urged to attend last night’s meeting. “We are working with Baltimore City Council President Nick Mosby, and we are very close to getting this passed.”

Ramos and other council members said they spoke with meeting participants who came from Baltimore County, Bowie and other areas outside the city.

Marks praised Mosby last night, saying, “What you have identified and put together is taking off like wildfire in the best possible way.”

“I know it sounds too good to be true, but NACA has a track record of unprecedented success,” he added.

Cohen, who pressed Marks during the meeting about NACA’s arrangement with Bank of America, said he was trying to learn more about the organization.

“I think they have a very mixed record and there are some concerns they are a predatory organization,” he said.

Area housing advocates said they had little experience with the organization, and those who did, were not impressed.

Attorney Phillip R. Robinson, who advocated for people impacted by predatory lending in the wake of the 2008 housing collapse, recalled assisting several clients who had had unsatisfactory experiences with NACA.

“One person had a dispute with NACA as a result of a loan. NACA forced him into arbitration, and he had to go to Boston to resolve the dispute,” said Robinson, the former executive director of Civil Justice Inc.

“I can think of many organizations who work on these issue in Baltimore who have positive track records of success in similar projects,” he continued.

“I could not add Mr. Marks’ NACA to that list.”