Increasingly over the past year, turnover of senior staff at Baltimore County’s Department of Public Works and Transportation has been raising eyebrows – so much so that when asked about it, one county insider responded, “Oh, you mean the mass exodus?”

• Nearly all of the top personnel – including all five bureau chiefs, four division chiefs and five section chiefs – have resigned or retired since D’Andrea L. Walker was placed in charge of the agency.

• Of 38 senior positions listed in DPW&T’s organization chart in FY2021, at least 23 are now filled with new staff (the exact number is hard to determine because several bureaus were reorganized and, in some cases, expanded).

The departures are being blamed by critics on a lack of confidence in Walker, a non-engineer who remains, by law, “acting director” of the sprawling agency 1½ years after her appointment.

Walker cannot officially become head of the department because she is not a licensed professional engineer, as required by the county charter.

A referendum question, to come before voters in November, would change the county charter to better fit Walker’s qualifications as a transportation administrator.

Critics say the managers that Walker is bringing in lack qualifications as well.

“We’ve lost hundreds of years of experience in the last few months alone,” said an employee, who asked not to be identified because county employees are not authorized to speak to the media.

“We have a new chief of transportation who has never done any traffic engineering. The public is going to start getting hurt because of the brain drain in the department.”

A spokeswoman for  Johnny Olszewski says the county executive “fully supports” his choice to lead the agency.

“D’Andrea Walker is a highly qualified, exceptional leader, and Baltimore County is lucky to have her serving our communities,” Olszewski is quoted as saying.

DPW&T is by far the largest agency in county government, with about 900 employees and a proposed FY23 operating budget of $492 million.

Responsible for the county’s infrastructure, it has a six-year capital spending program that includes $1 billion for an aging sewage system that’s under a federal consent decree, $187 million for streets and highways, $46 million for bridges, and $43 million for storm drains and improved refuse disposal.

Much of the current dissatisfaction stems from the belief that Walker, who previously supervised bus transportation for Prince George’s County, has no background or knowledge in sewers, highways and other public works.

It is further alleged that, as a politically-connected onetime girlfriend of Kweisi Mfume, she is making decisions based on politics and picking hires more for loyalty than competence.

“It’s like appointing a citizen to run the police department,” one current employee said.

Walker was not made available for questions by the administration, but a person close to her pushed back, saying DPW&T is transitioning into a more inclusive and better-run agency.

Vacant senior positions have been filled, The Brew was told, and ongoing capital projects will not be delayed. During Walker’s tenure, the Towson Loop free bus service has been established and curbside bulk trash pickup has returned to the county.

In an April 26 email to staff, Walker addressed the personnel changes, writing, “The organization is coming to life with new faces, new ideas and new directions. The senior staff is being infused with new blood. There is new and dynamic leadership.”

Noting her latest appointments in construction, solid waste, transit, asset management and sewer design, she said, “These are all exceptional people with strong backgrounds who will help us on our journey.” 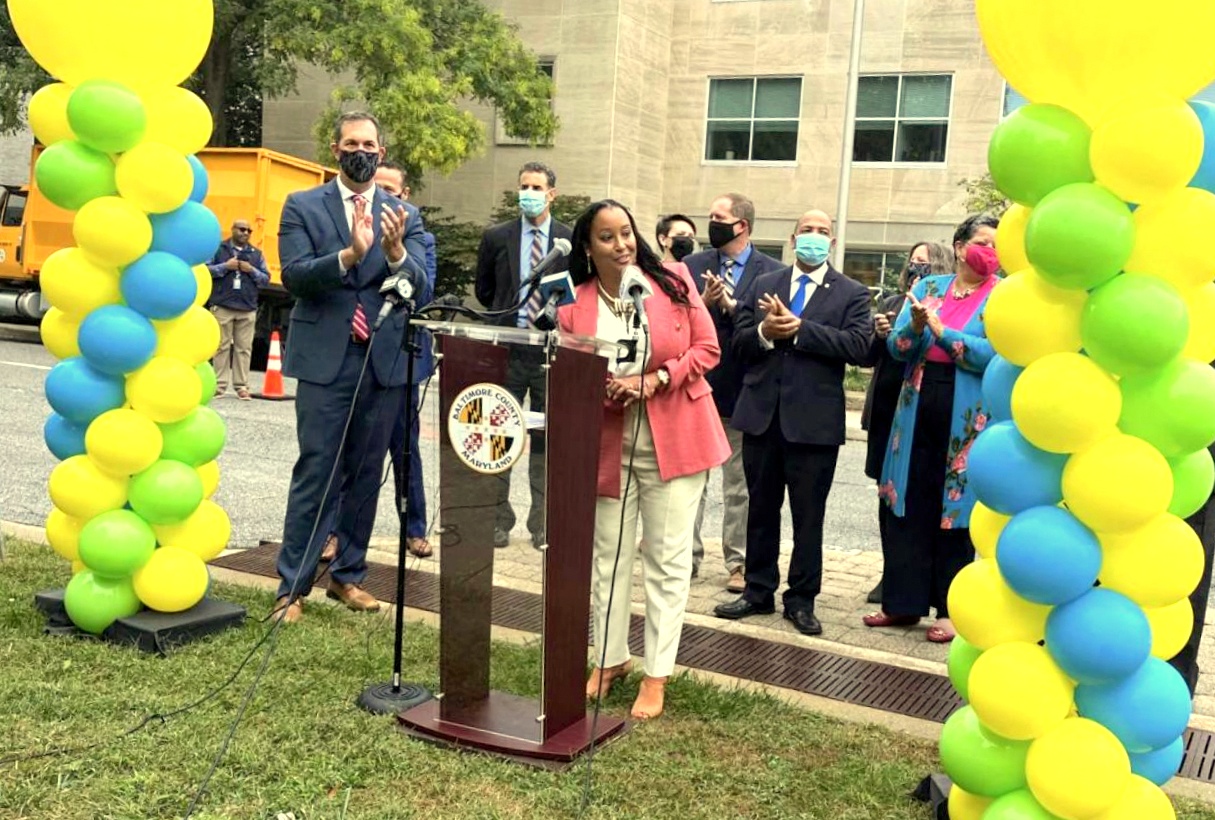 D’Andrea Walker speaks at the opening of the Towson Loop bus service last October. To her right is County Executive Johnny Oszewski, and to her left are Councilman David Marks, Council President Julian Jones and County Administrator Stacy Rodgers. (baltimorecounty.gov)

A graduate of Morgan State University, Walker worked in many transportation roles before she was hired as Baltimore County’s first director of transportation in February 2020.

The position was created within Public Works to implement Olszewski’s plan for multi-modal transportation focused on transit and walkability. The plan resulted last fall in the Towson Loop, a free shuttle bus serving Shepard Pratt, St. Joseph’s Medical Center, Towson Town Center and other anchor institutions around the county seat.

Walker’s path to the top of the agency came after DPW&T Director Steve Walsh retired in June 2020 to become deputy director of public works for Harford County.

Four months later, in October 2020, Keifer retired, and Walker was made acting DPW director by Olszewski.

Skirting Around the Charter

County law precludes an acting director from serving more than 60 days without County Council approval. But instead of calling out the administration on the charter violation, the County Council praised Walker.

A bill was unanimously passed that would pave the way for Walker to become the permanent director.

“You don’t need a professional engineer to run a department of transportation,” said Councilman David Marks, who introduced the bill co-sponsored by Julian E. Jones Jr. and Izzy Patoka.  “You just need someone who has a strong background in transportation and planning.”

“We’ve got a great person in there right now,” added Councilman Tom Quirk, explaining, “If there’s one department we really need help on, it’s this department.”

The charter amendment before voters this November would keep the licensed professional engineer standard, but would add an alternative qualification – “at least 10 years of supervisory experience in infrastructure planning and construction or transportation engineering and management.”

The new language fits snugly into Walker’s government career that began when she was hired in 1999 by then-Gov. Parris Glendening as a junior member of the Office of Intergovernmental Affairs.

Her job with Glendening’s office took place as Mfume was trying to extricate himself from a controversial chapter of his life.

In 1997, while president of the NAACP, Mfume hired Walker (then D’Andrea Lancelin) as his executive assistant. He later admitted to The Baltimore Sun that they were romantically involved.

Allegations that Mfume gave Lancelin preferential treatment led to a shouting match between female employees at the organization’s Baltimore headquarters, according to a 2019 report requested by then-NAACP chairman Julian Bond.

Lancelin left the organization, but was photographed in 2000 as Mfume’s guest at a White House dinner. In 2001, she sold Mfume a house in Baltimore County in a “non-arm’s length” transaction for $85,000. Four years later, Mfume sold the house for $140,000.

At that time, she was manager of DOT’s Office of Statewide Quality Compliance. She would soon be named deputy administrator of operations for MVA.